I am building and painting an army of Silver Skulls space marines. My skills aren't the best but we'll see how things go. I will also be using custom bits (mostly from Poland, those guys make some cool stuff) to make my army special.

The first set of tactical marines was done by airbrushing GW boltgun over black primer then spraying again with chainmail to try and achieve a highlight. But they turned out mostly chainmail. 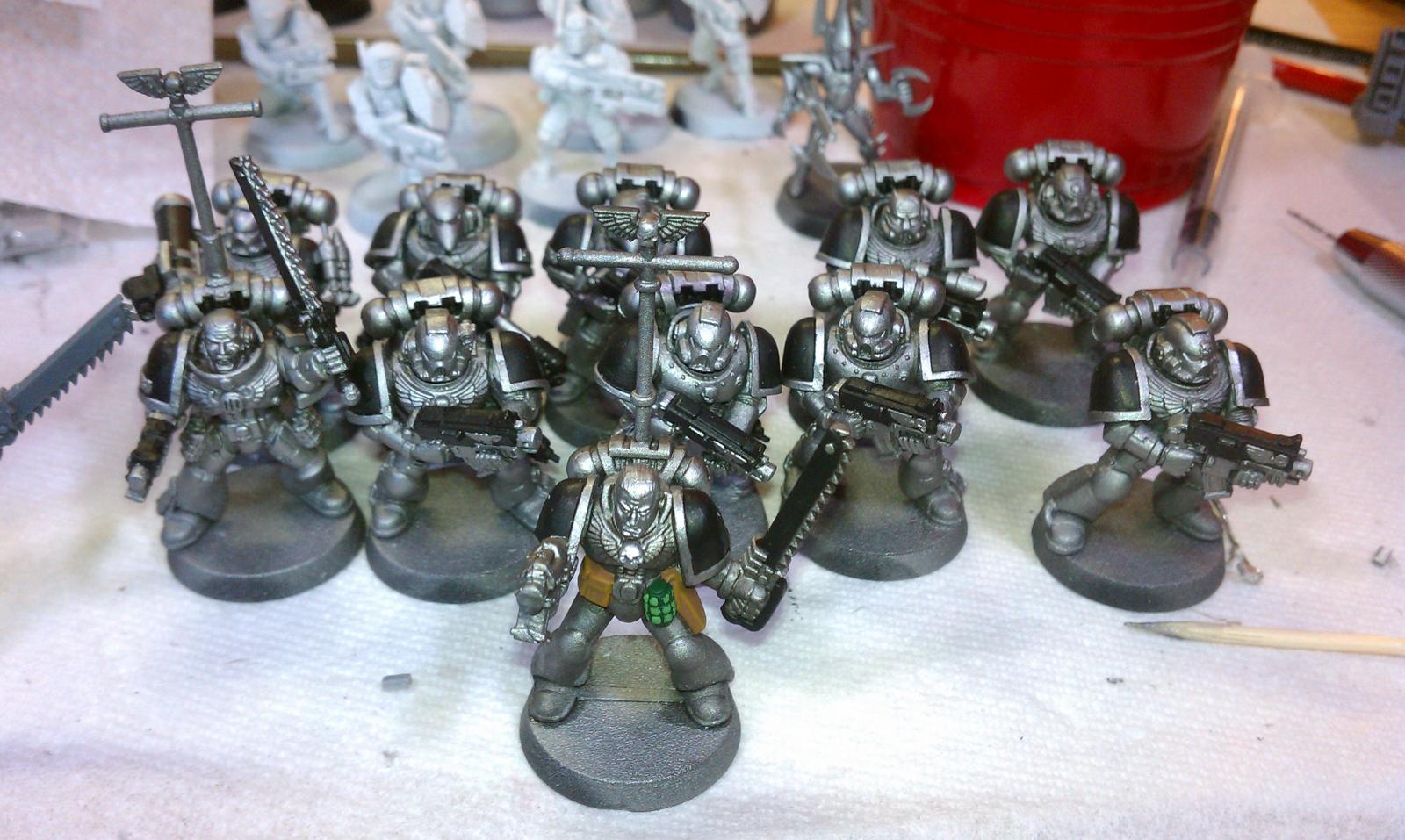 The second set of troops (devastators) is a base coat of Vallejo Air Gun over black primer with a Vallejo Air Steel highlight. You can see how much darker these guys are. And you can tell that one plasma cannon and one Lascannon troopers didn't get the Steel highlight. 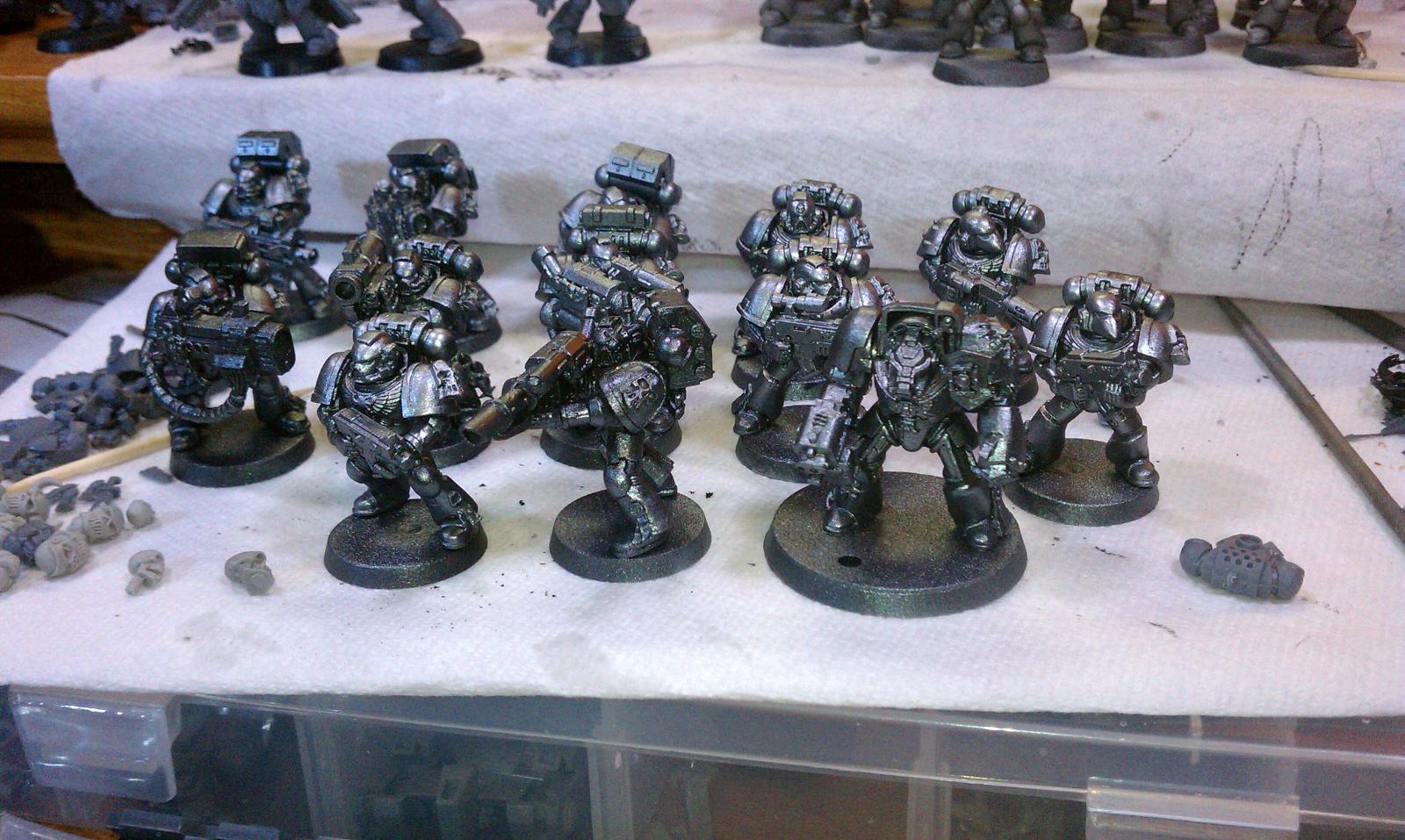 Next are pictures of my Commander and Dev squad leader and tactical squad leader with Maxmini.eu Skull Tribe heads. 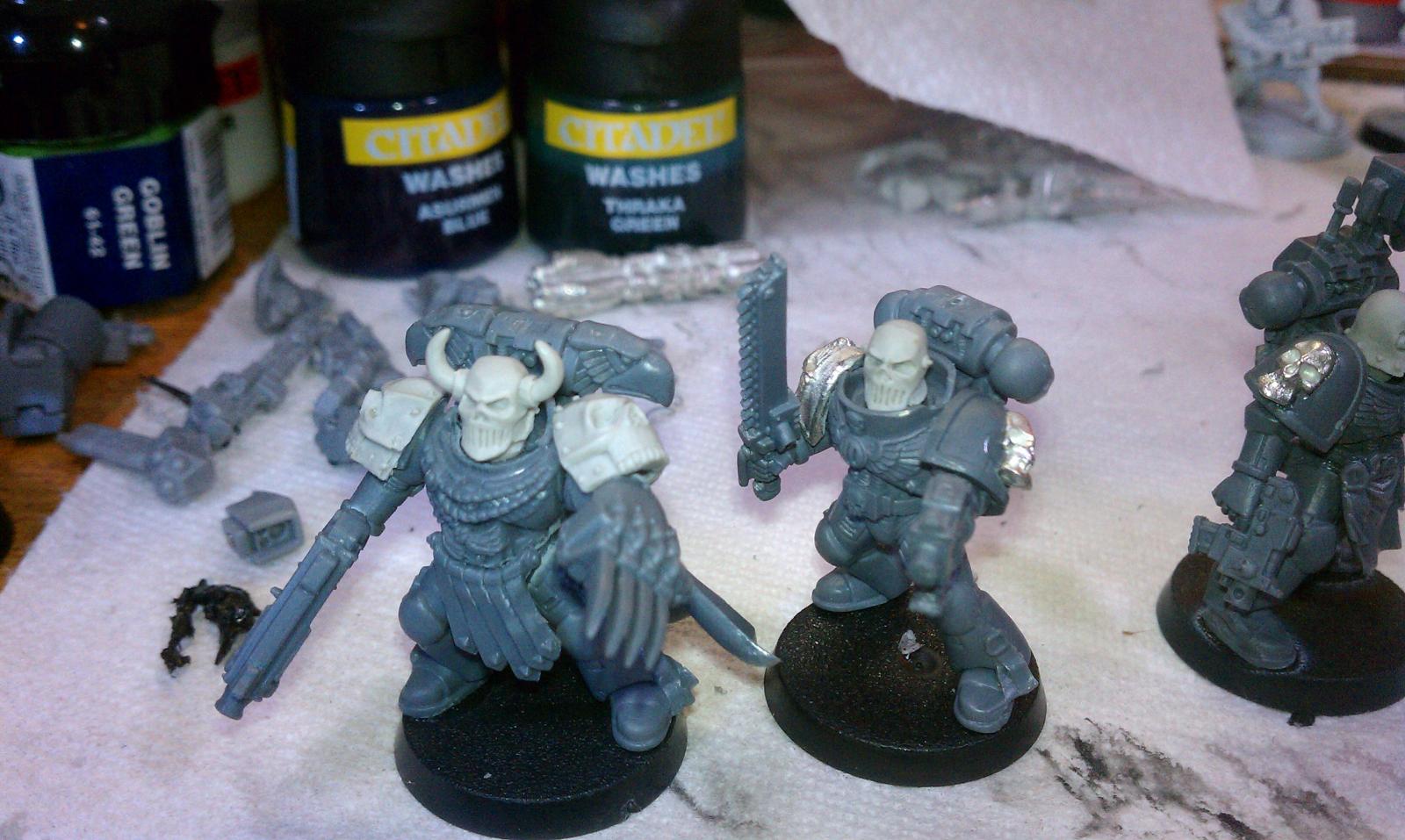 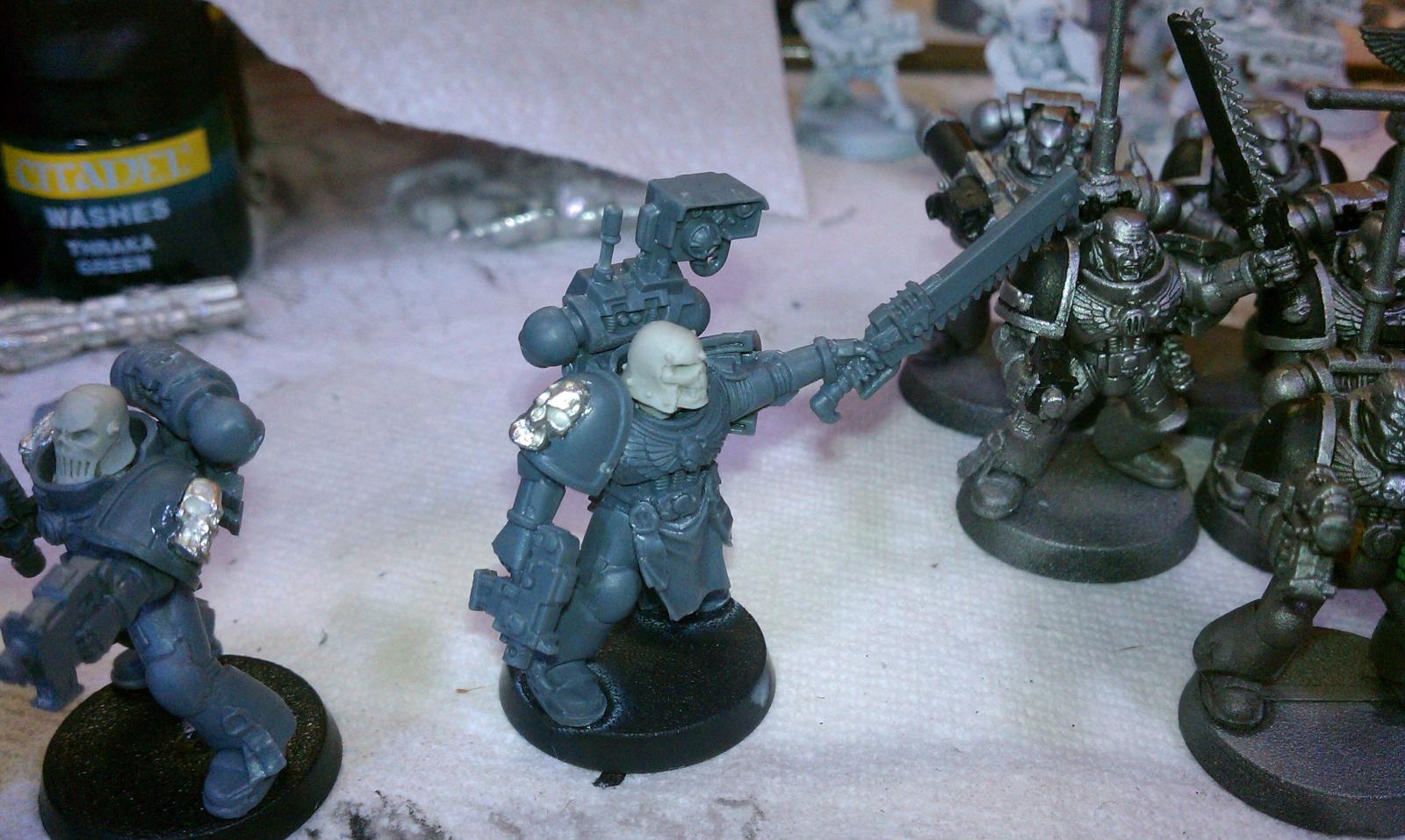 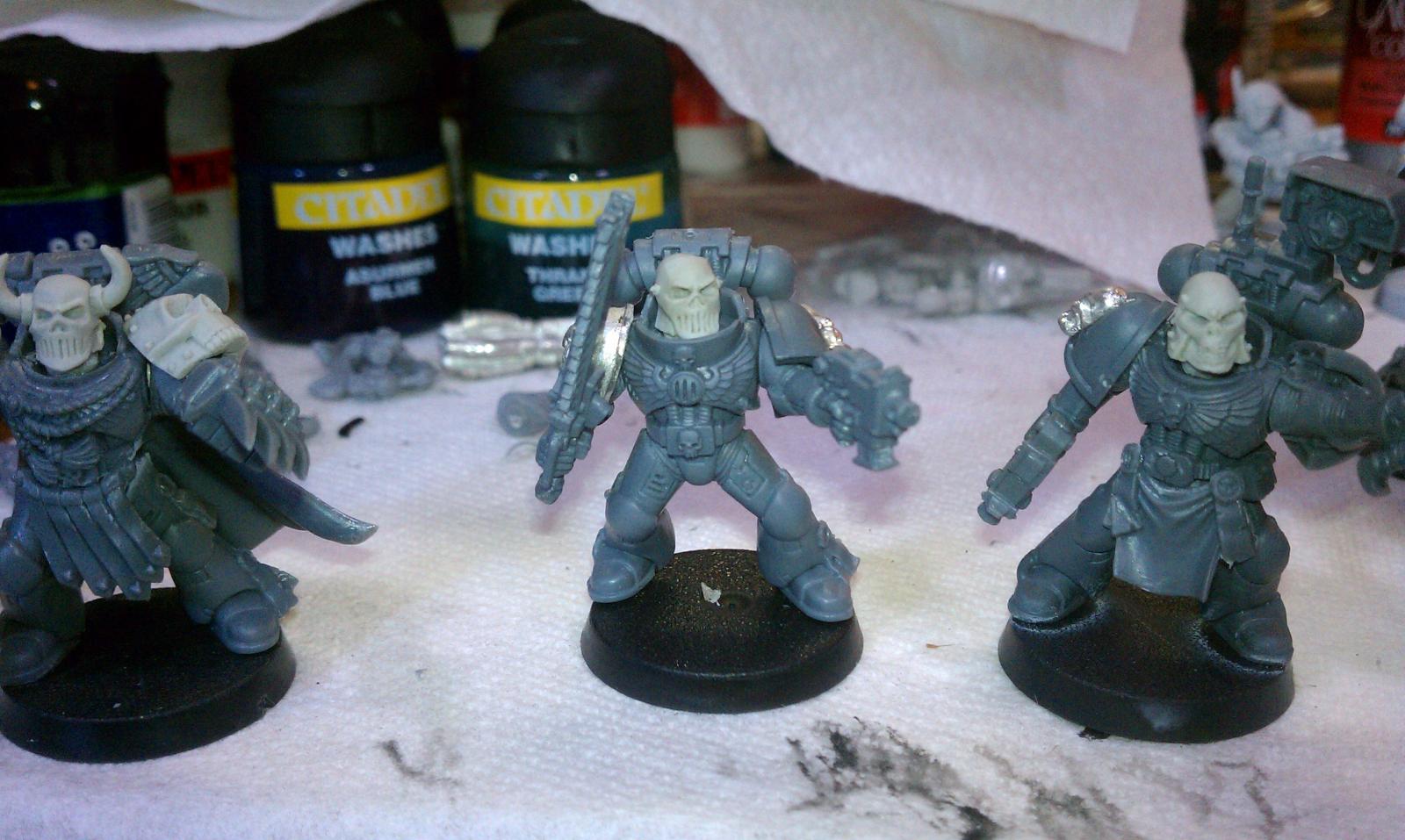 You'll notice the recessed metal skull in the shoulderpads on the SQ LDR. That skull is from the GW Silver Skulls shoulder pads. I hacked them off the metal shoulder pad then hacked up a plastic shoulder pad. The metal pads stick way out, so by removing the 3D skull and recessing it into a plastic pad, it's looks a lot better. HOWEVER it is a HUGE PITA! So I gave up and now am using the GW pads as is. I will have at least 30 tactical troops, and there was no way I was doing that hack job 30+ times. You can see the GW pads on the Devastators. I will keep this updated as I progress. Constructive Criticism welcome.

*Please note all models depicted so far are WIP, I have yet to completely finish a single one haha*

Love the idea to use the Skull Tribe heads... now why didn't I think of that!

I second WholeHazelNuts in saying that those heads are perfect for your Silver Skulls. Keep up the good work!

Life is a prison, death a release....

Dammit jim! Im a gamer, not a painter!

Well compared to some paint schemes I would say yes. The combination of using one base color and having an airbrush makes it very nice and easy. At least in the beginning. I can apply the base coat and an overall highlight to a squad in minutes. And getting to the stage where my test squad is took no time at all really. I should be able to get all the troops to the 3 color level in no time at all. Beyond that I don't know. I guess I need to do one model all the way and see how long it takes.

Thanks for the comments. I think they are going to look pretty good once done. I also have some zombie heads and random skulls to add trophies to some of the troops. I think the custom heads will really make the leaders and selected troopers POP. I envision the heads as representing ceremonial masks instead of helmets. They are not quite big enough to be armored helmets with a contained electronics and sensory package.

I sprayed them from a 45 degree angle from the front but the back was way to dark so I hit them from the back at a 45 as well. I will probably try the overhead approach on the next batch of tacticals.

I am liking the way these are going! Very impressed.

I have mostly been working on vehicles. I am trying to get this army at least assembled before the tournament in August. It's slow going.

So the following pictures are of two Rhino chassis'. One will be a rhino/razor and the other can be a Pred or rhino/razor. I failed to glue in a key metal plate prior to assembly on the Rhino/Razor so most likely I will end up gluing in it's two crew hatches. 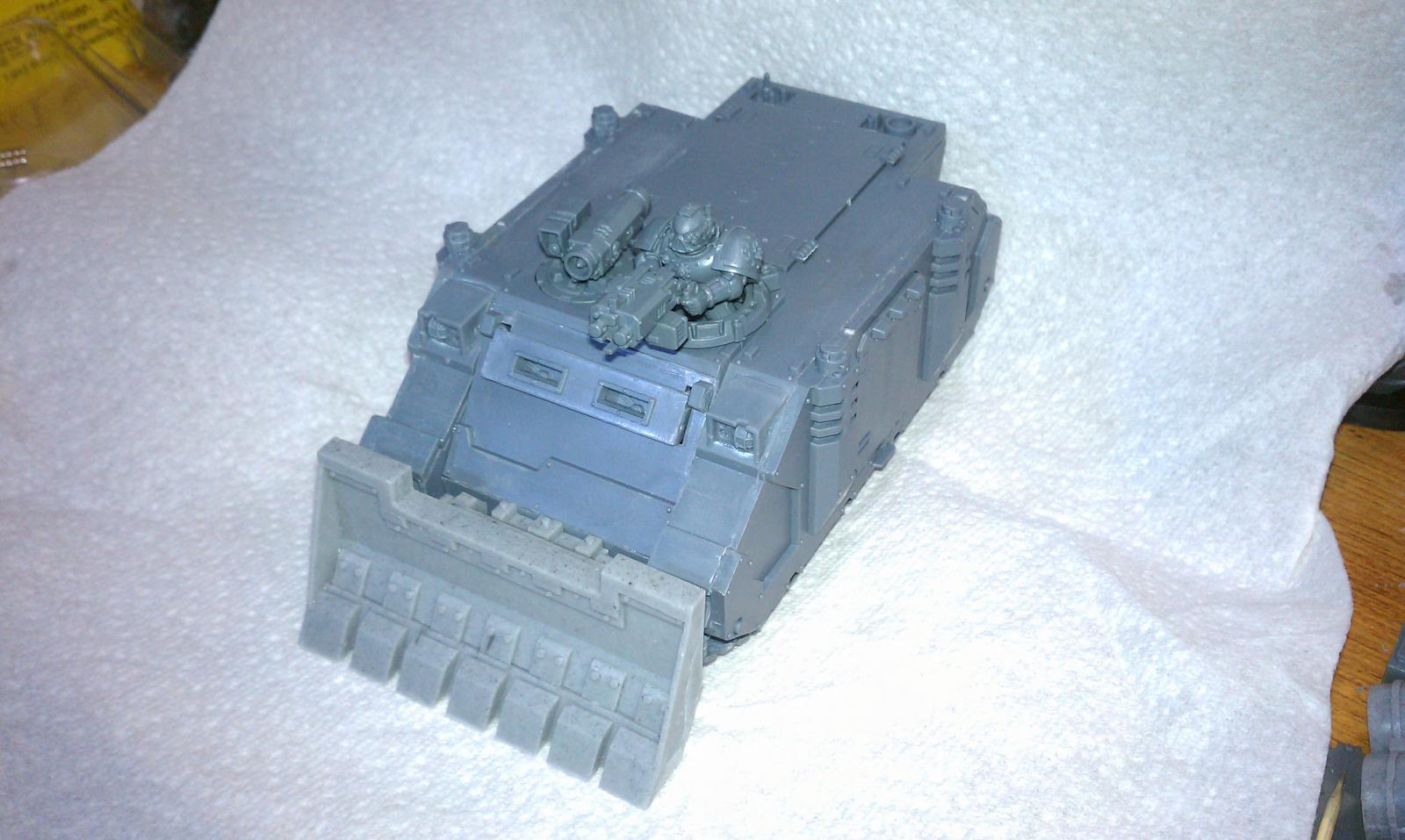 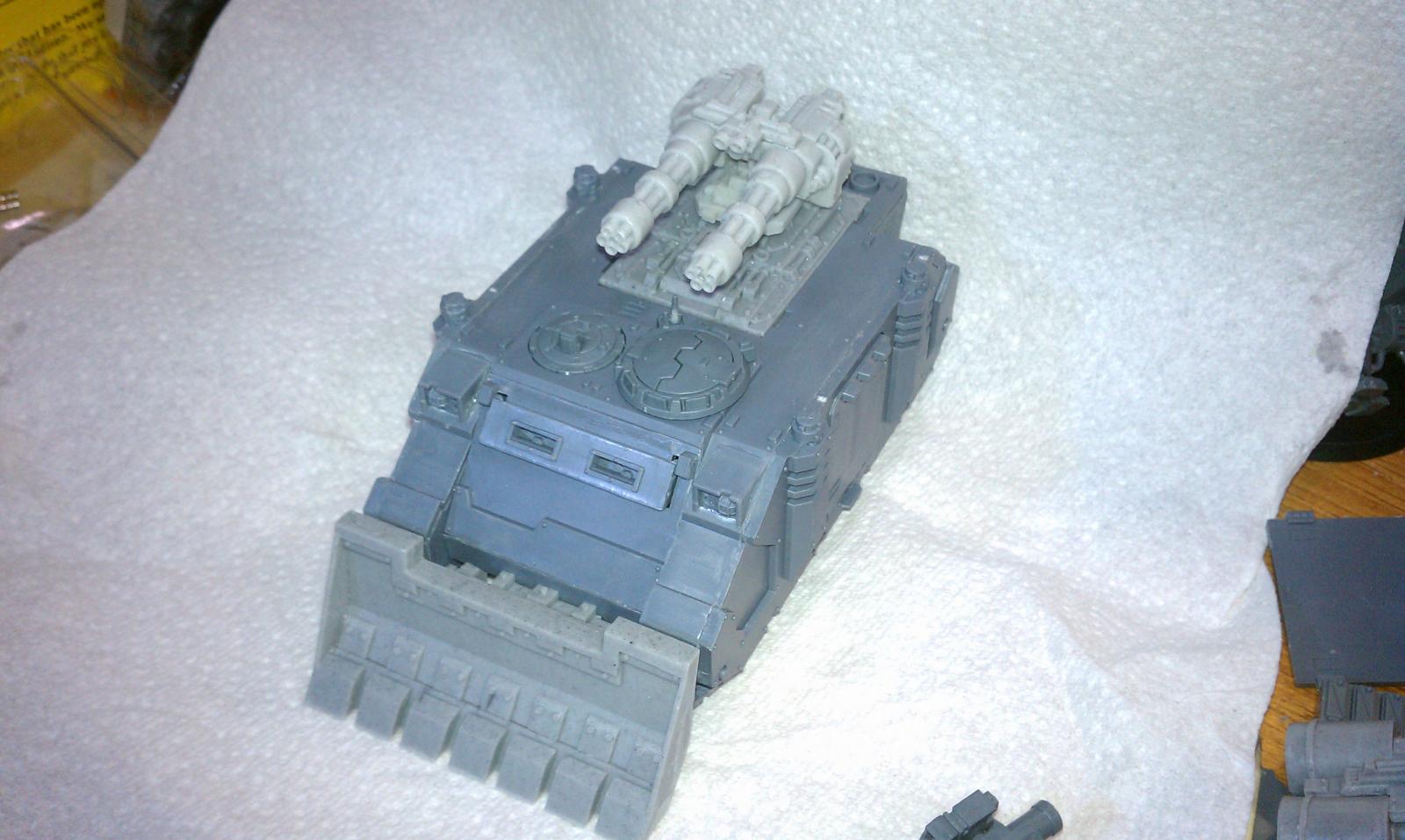 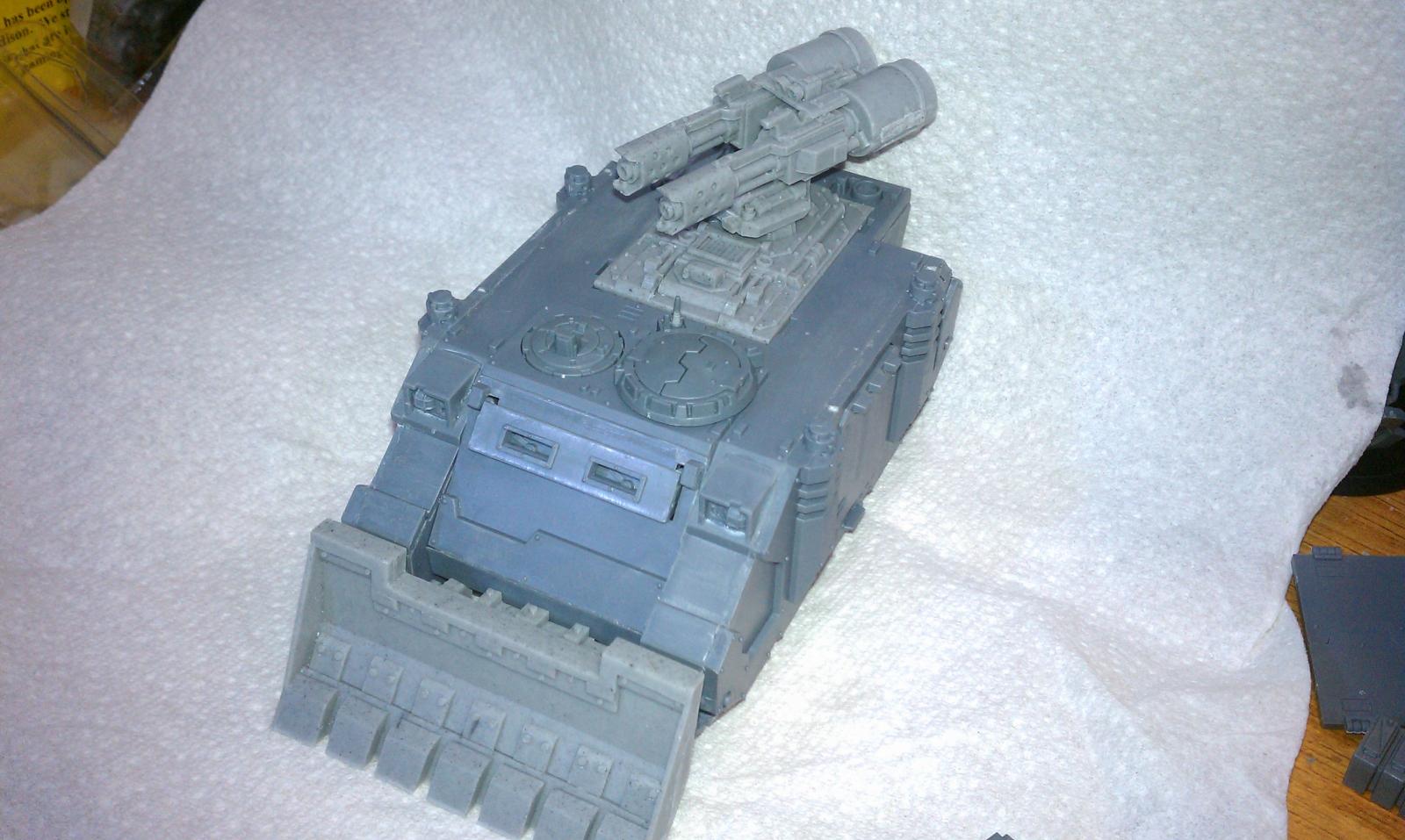 Next is the Predator. Heavy use of metal plates that I got from BlueTablePainting.com 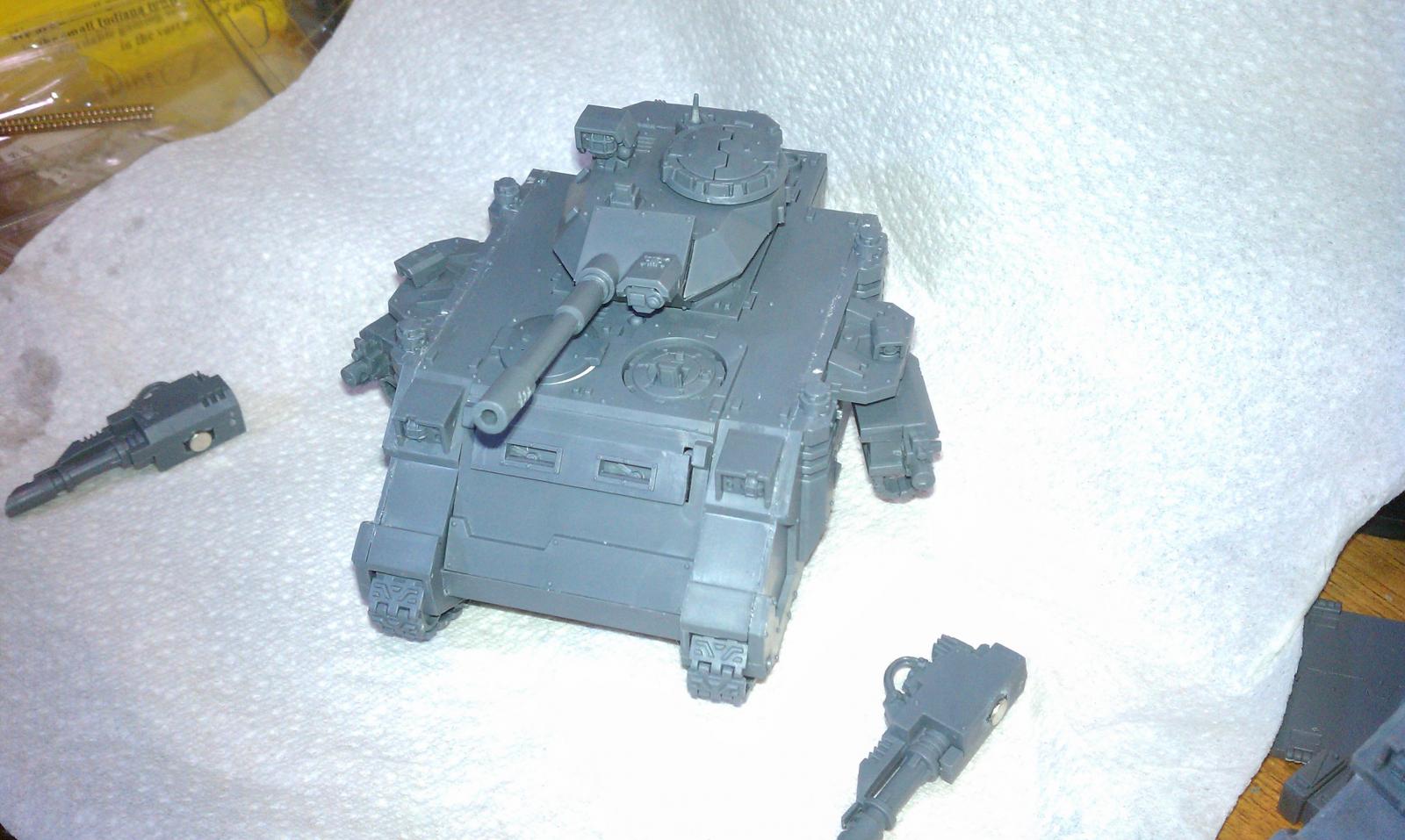 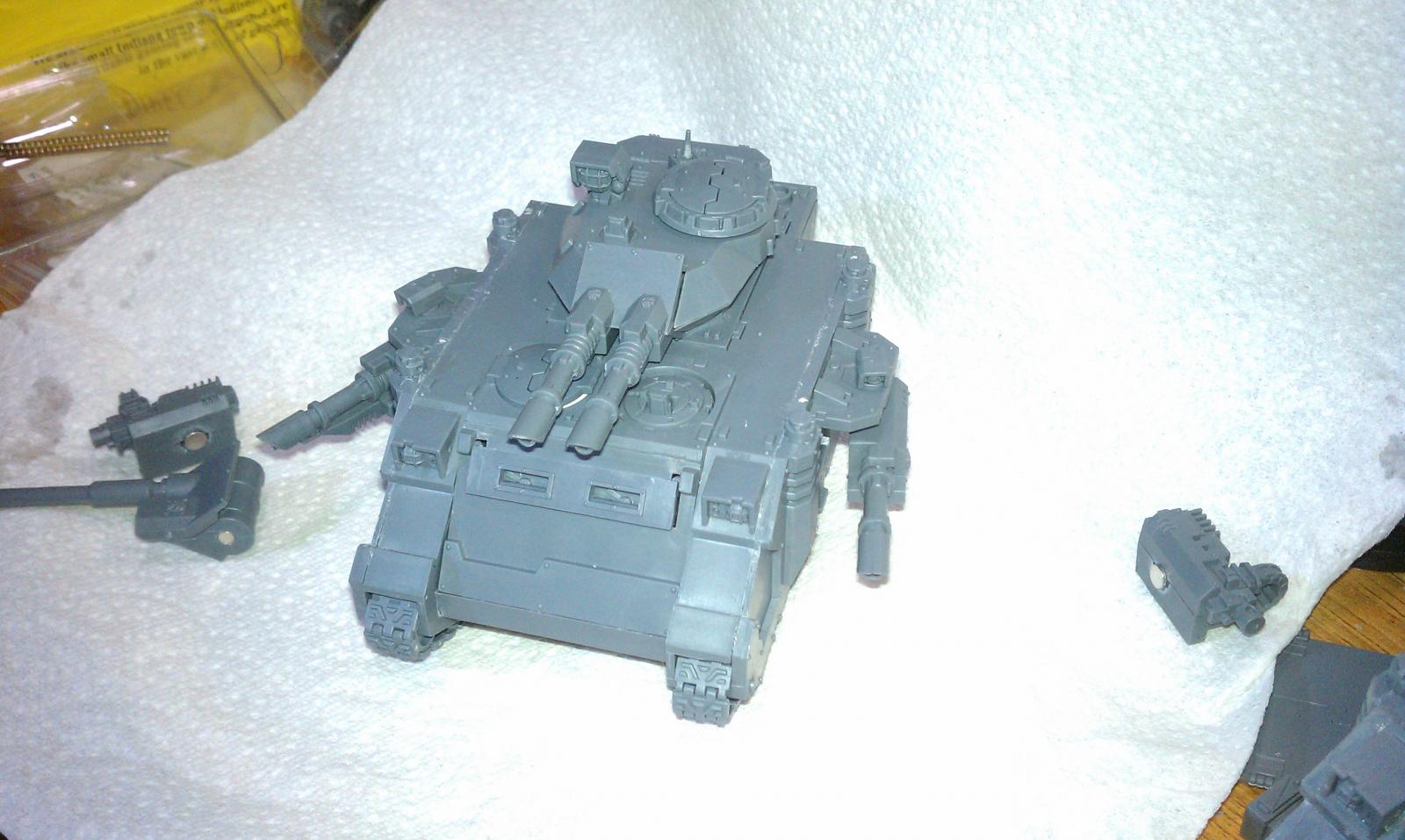 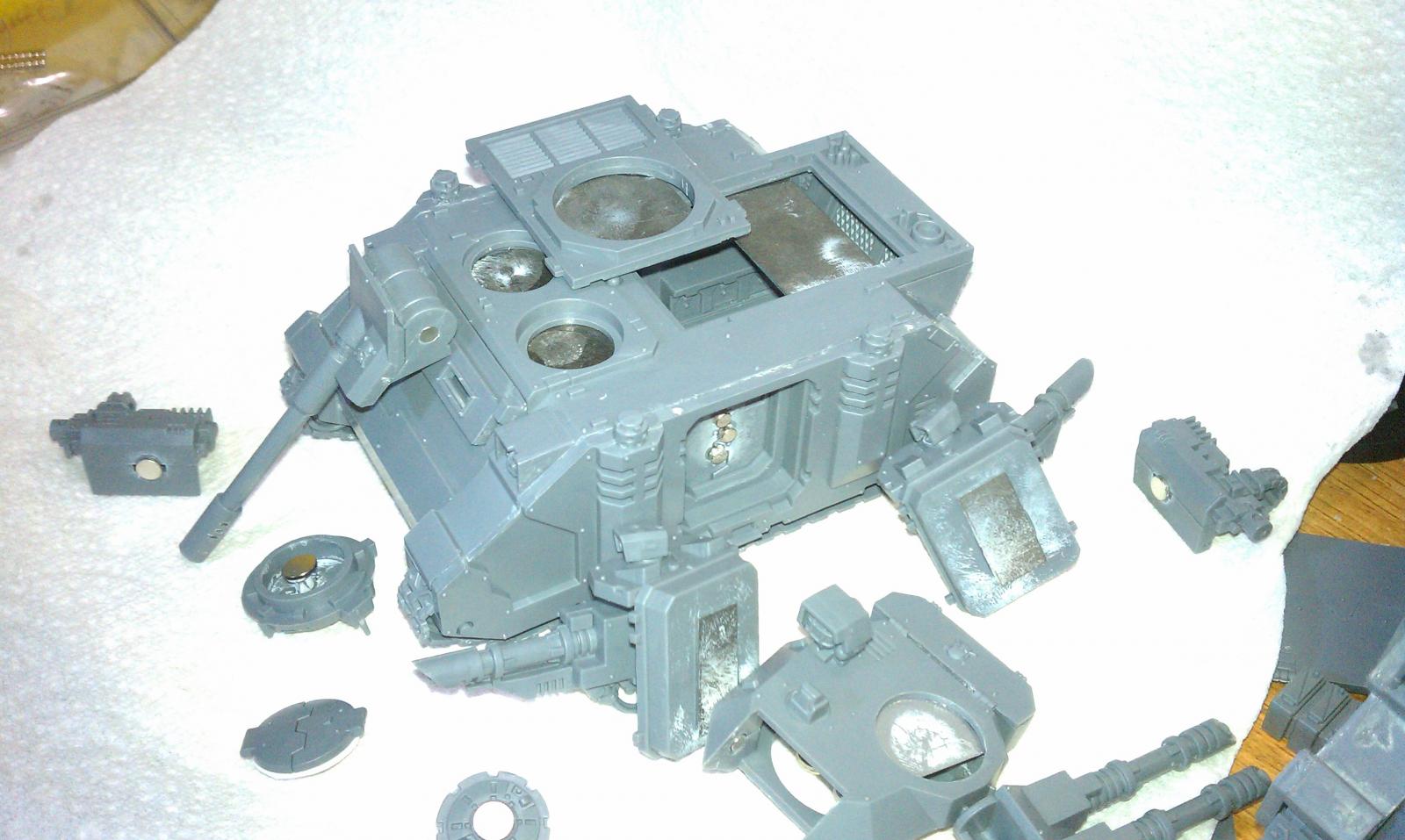 Minor Update to Captain and Squad Leaders: added skull trophies. I think the captain may need another one, what do you think? (skulls from maxmini) 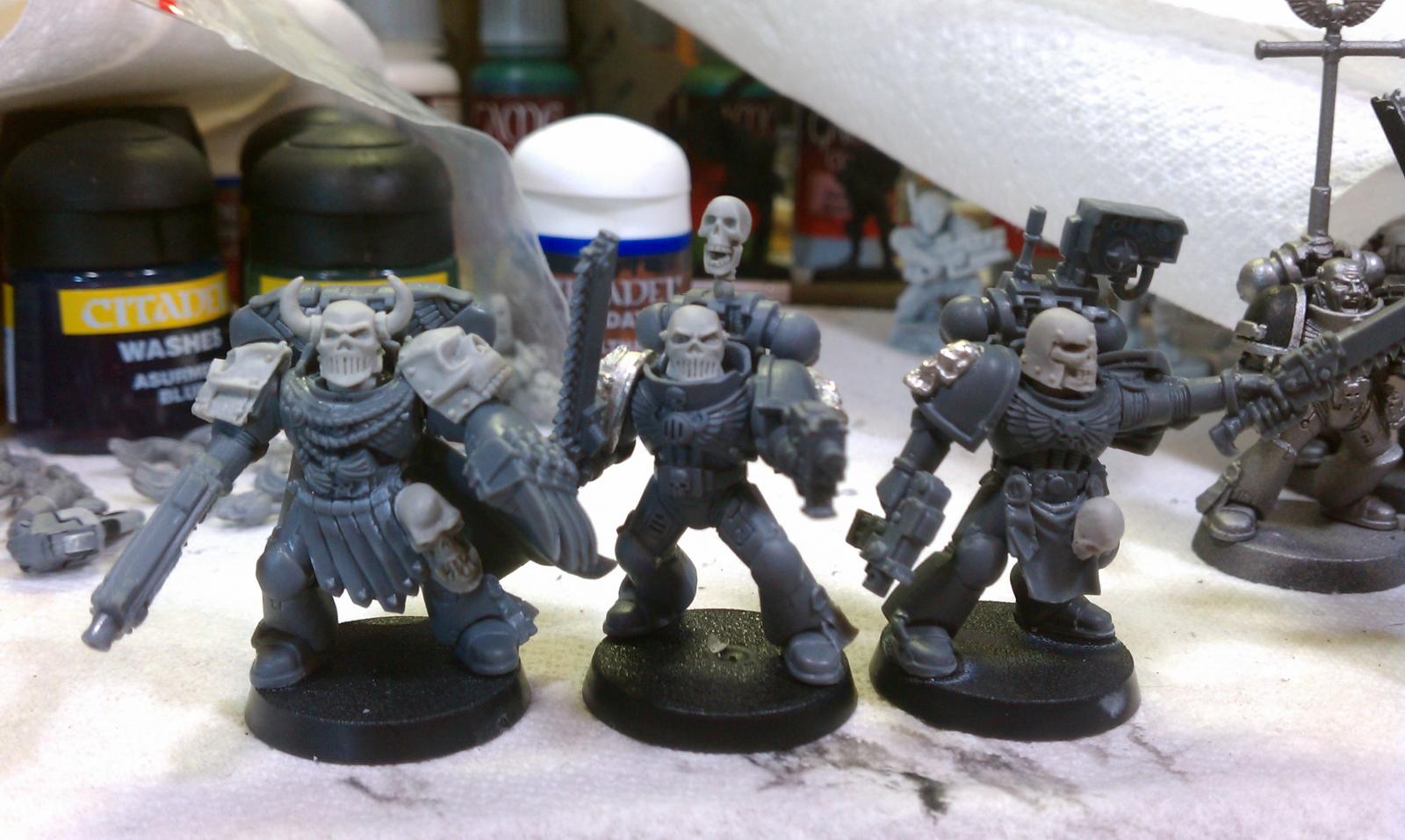 And Testing the Bitspudlo pre-heresy jump pack on an assault marine. 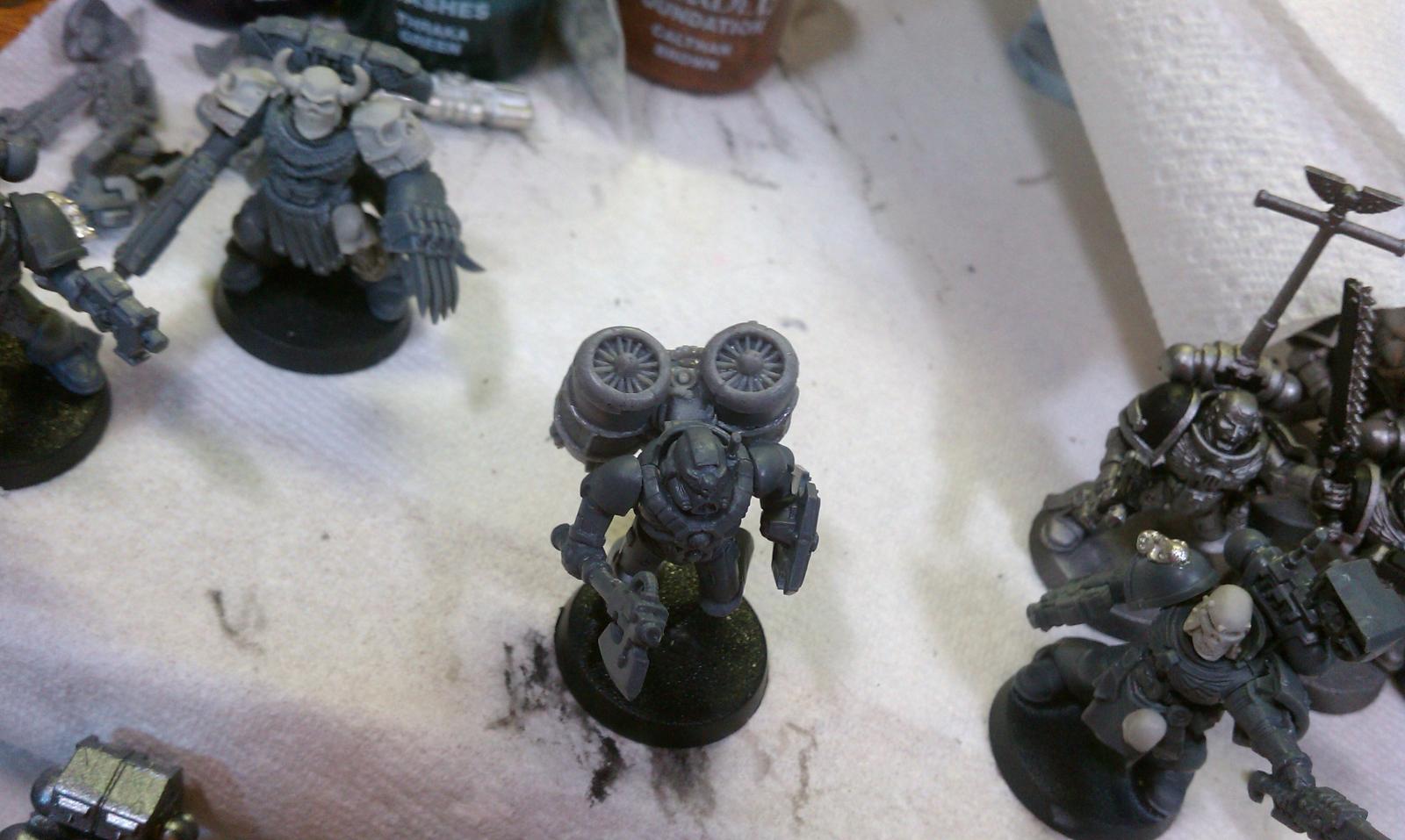 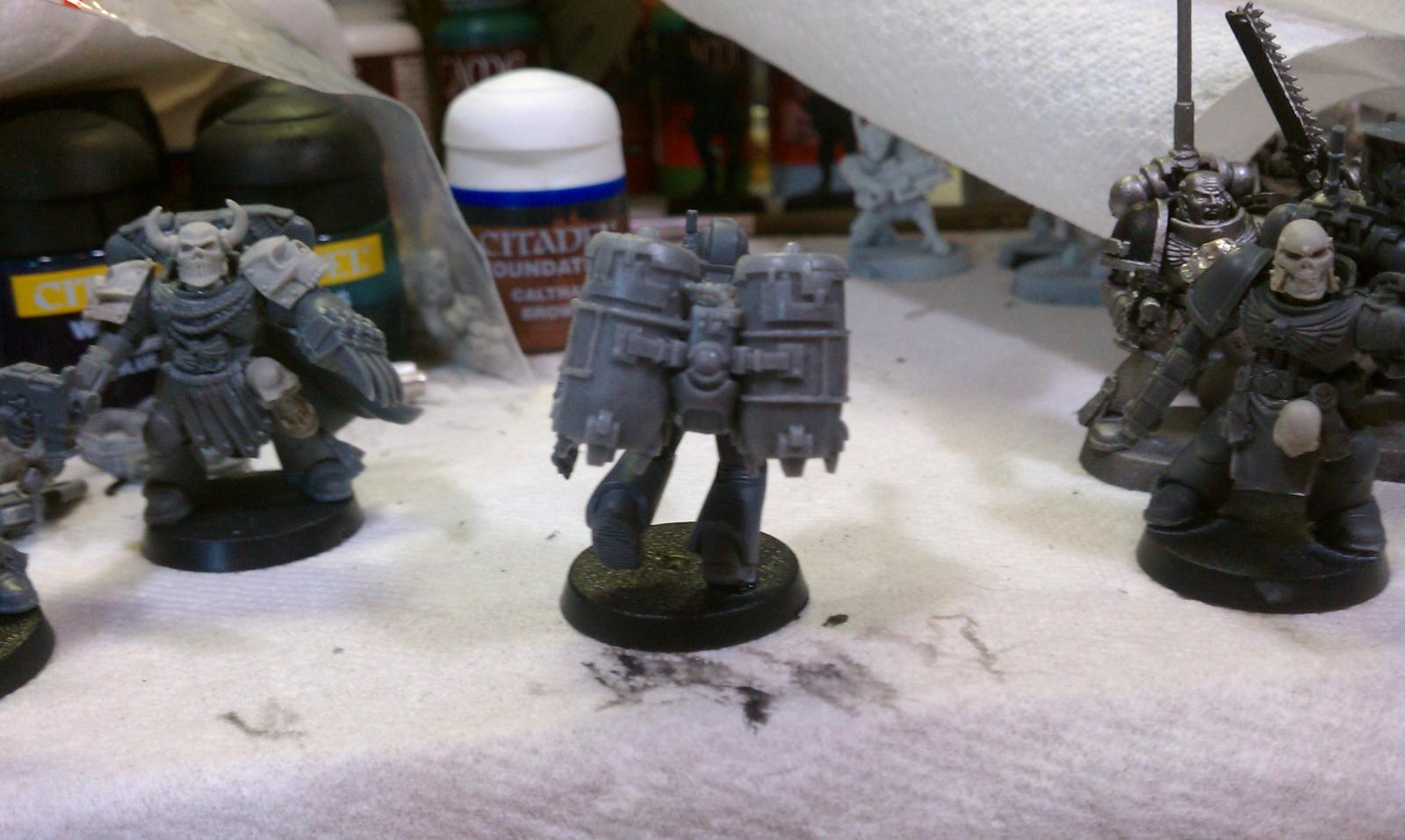 Update: I have my assault marines assembled. Just need to magnetize their backpacks.... Or not. Anyways, here are picks of the Squad leader, and team leader, both with magnetized arms. Also I did a little test with dynamic posing. I have one assault marine about to finish off a Dark Eldar guy. 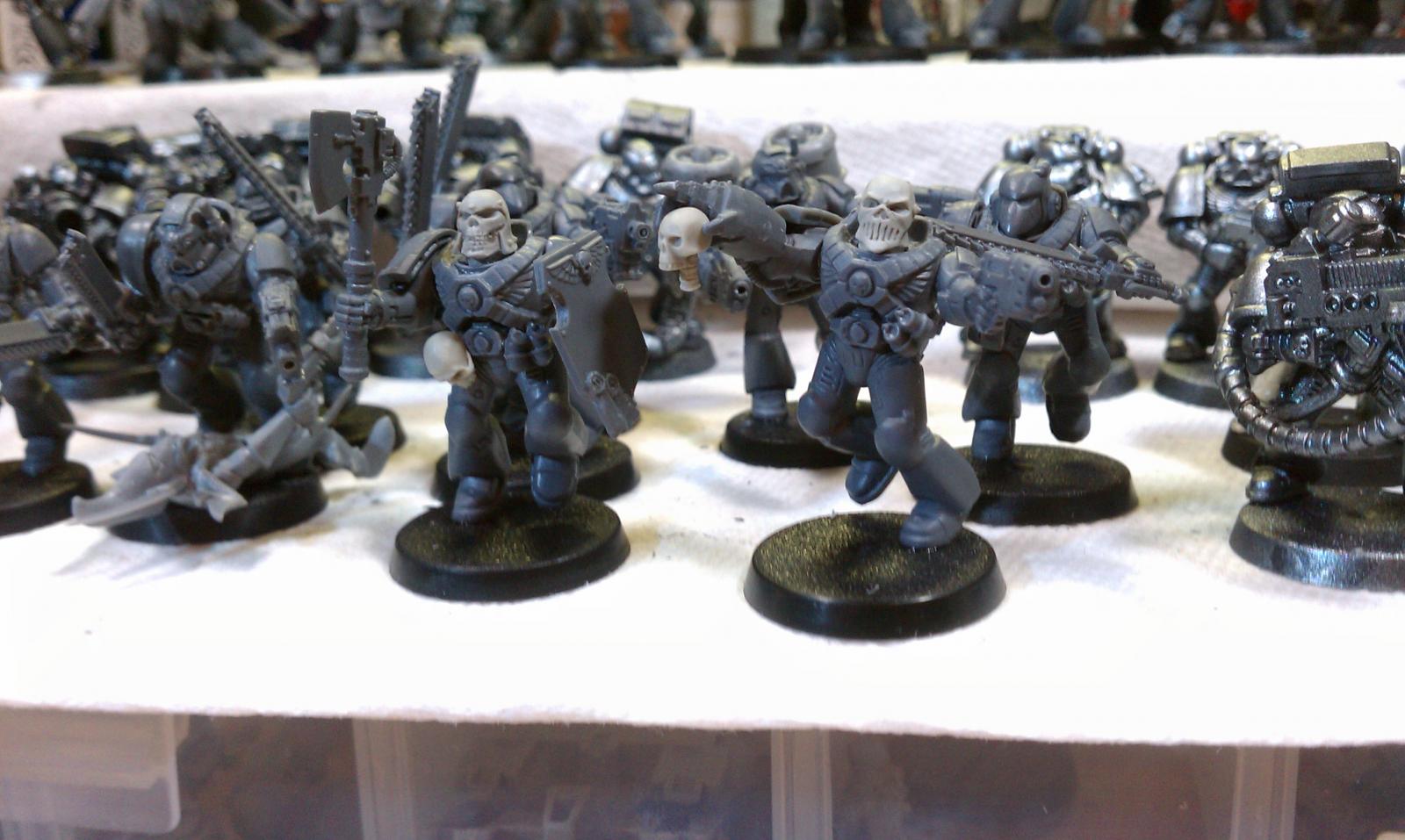 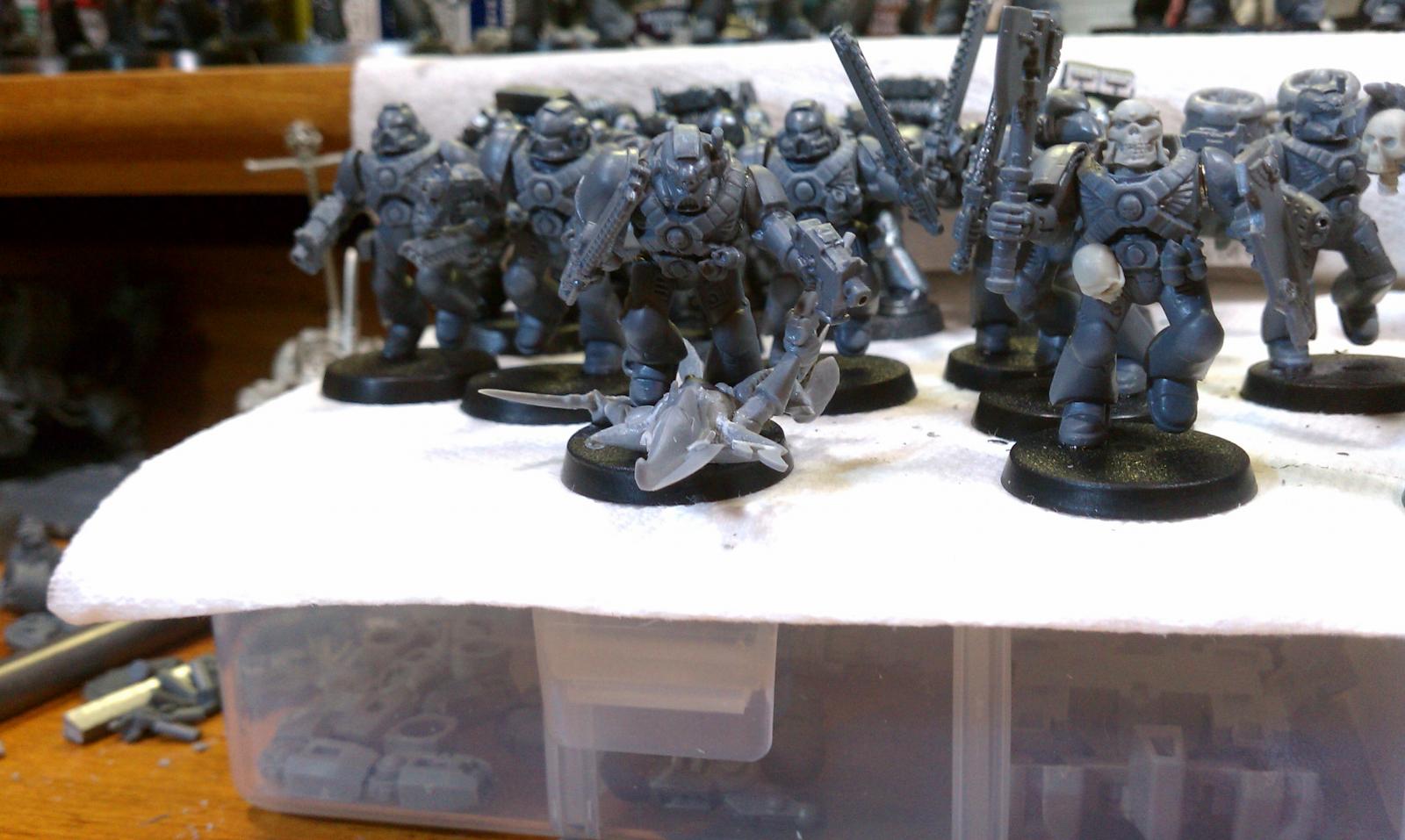 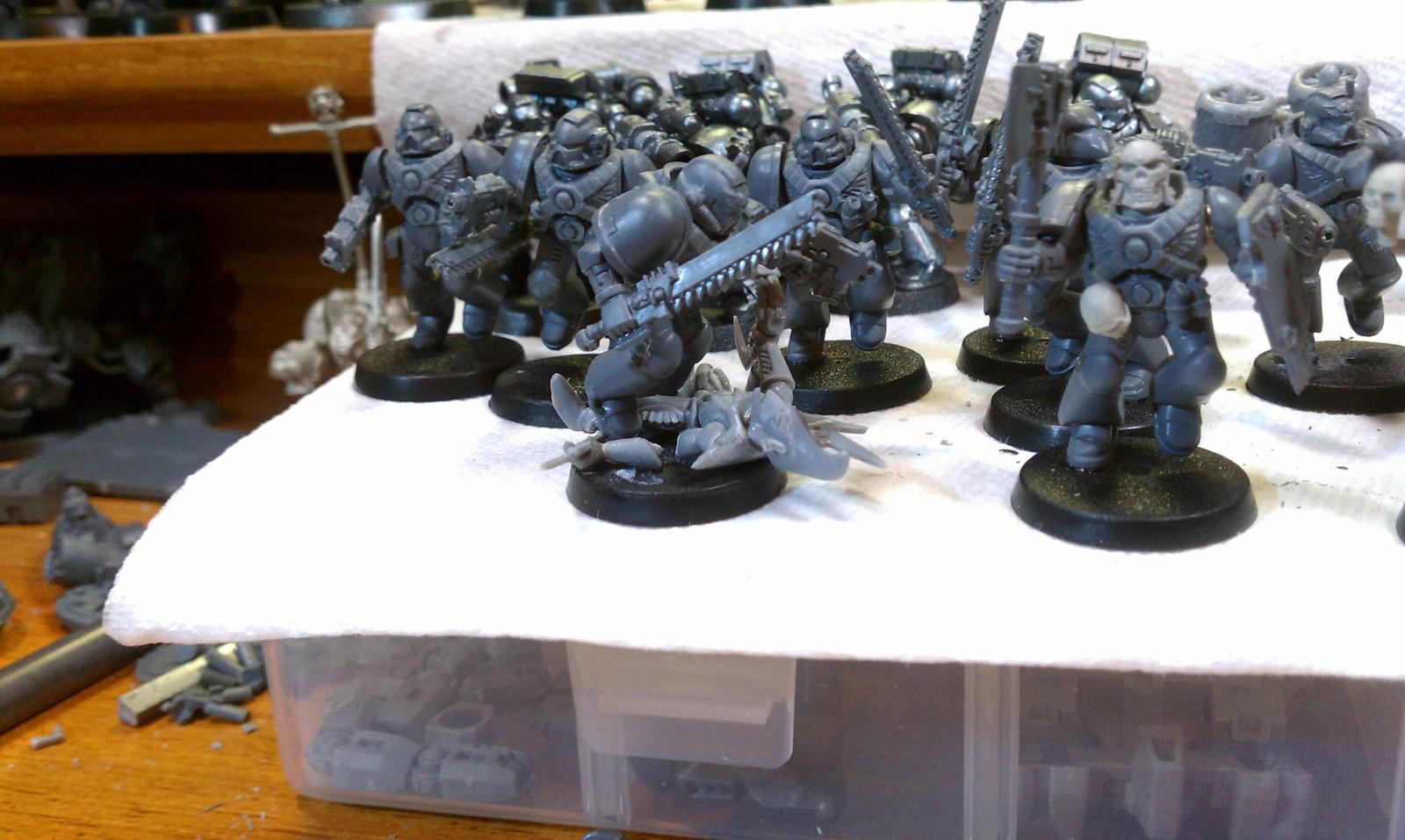 Thanks! I actually made a lot more progress than just these guys. I also got two more rhinos put together, got 80% of a tactical squad done, and about halfway done with my assembling my first Land Raider!

Also do you have pictures of your army? And I would definitely like to see how you make your Sternguard!

(I just thought it was interesting to make it like that. A lot of the skulls from Maxmini have bits of spine on them. So I thought it would be cool to make it look like he just took a fresh trophy.)

Thanks for the compliment! As soon as I get the rest of the army assembled, I will start in heavy with the painting.

I have some more Maxmini bits awaiting me at the post office, so I can finish my infantry and customize a new set of dakka Terminators. I have 1.5 Land Raiders to finish, and one more Razorback I just got today. So when I get everything assembled enough to field it, I'll start painting.

This is super awesome. I became a fan of the Silver Skulls after I read their part in the Soul Drinkers Phalanx novel.

So got some more goodies from Maxmini today. As I said before, being that it is widely believed that the Silver Skulls are a 2nd founding chapter, I wanted to mix in a little Heresy Era feel. So I have outfitted a couple tactical marines with Steam Knight Helmets. There will be some much more tasty pictures coming in the next few days when I utilize the other bits I received with these helmets. (the two marines without arms are going to be magnetized. Sergeant and special/heavy weapon trooper) 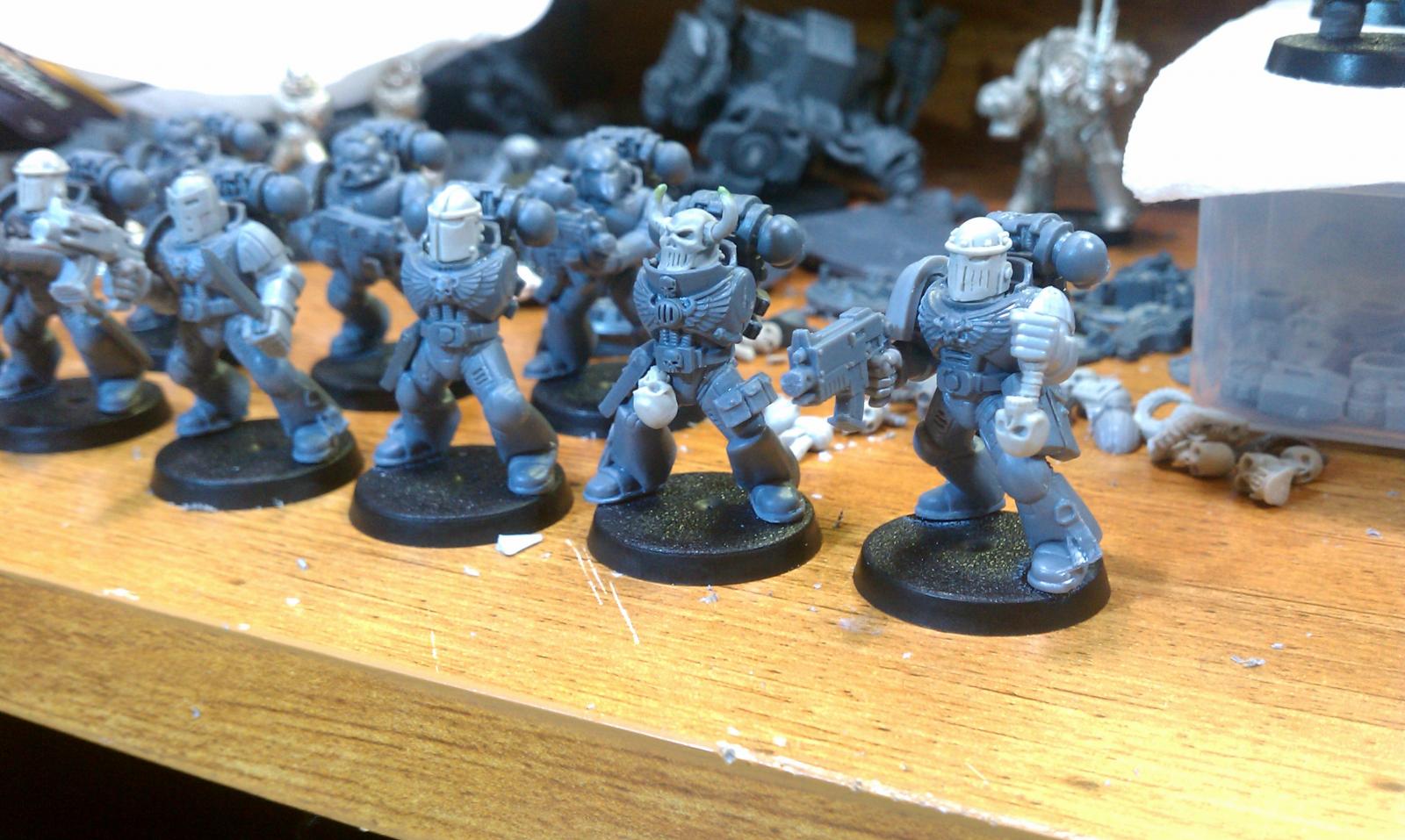 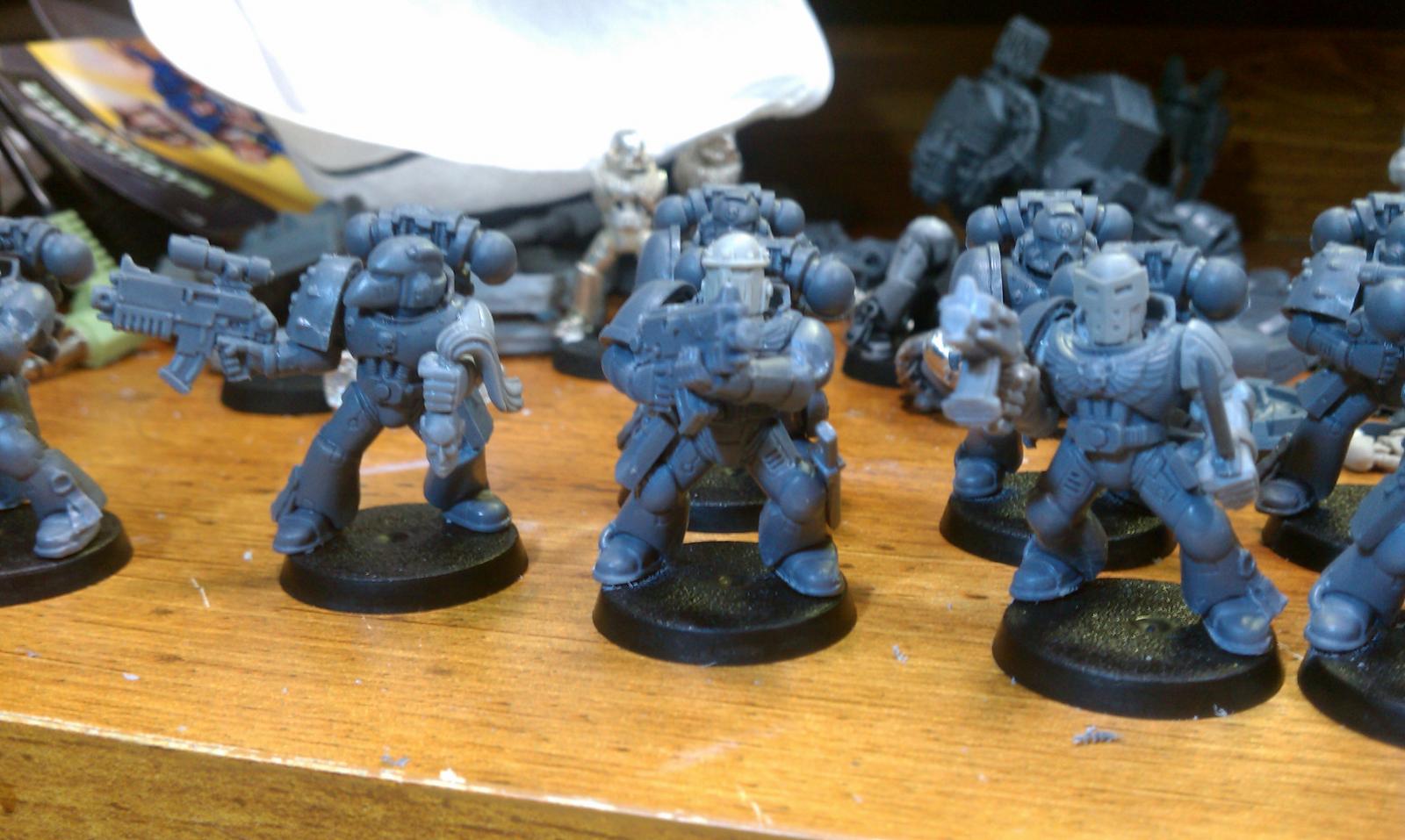 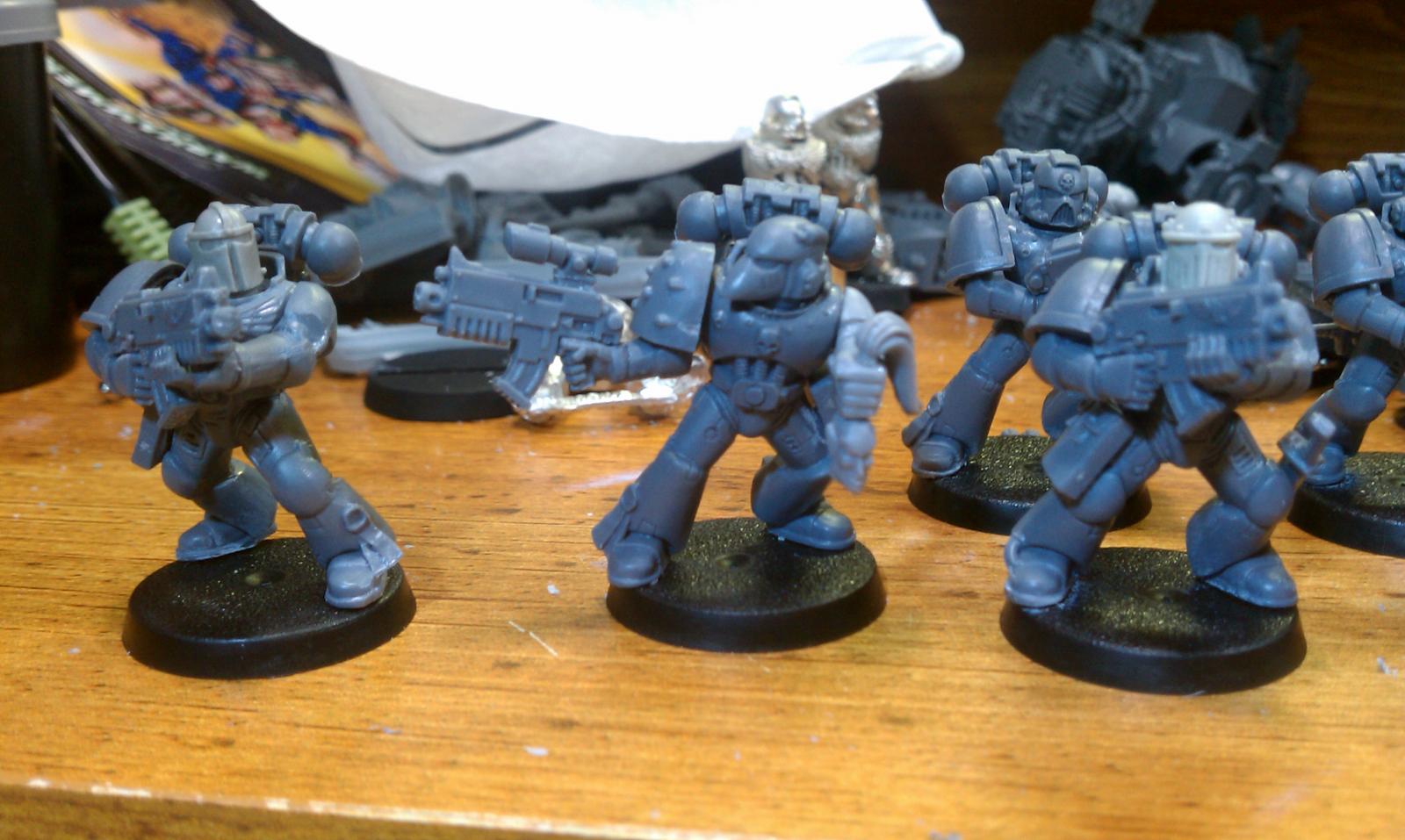 This is what I'm thinking for the Terminators. Rough idea.
Terminator Paint Scheme

They are a Polish casting company. They are fairly new and small so supply is something they are working on. One of the staff said they were going to have a major restock this coming Monday. I highly recommend their stuff. It's not perfect casting, but I think for the unique things they offer it's worth it. And they are getting better with every batch. Check out Bitspudlo Dakka Thread for more of their stuff and updates on products and restocks.

Check out my new terminators: 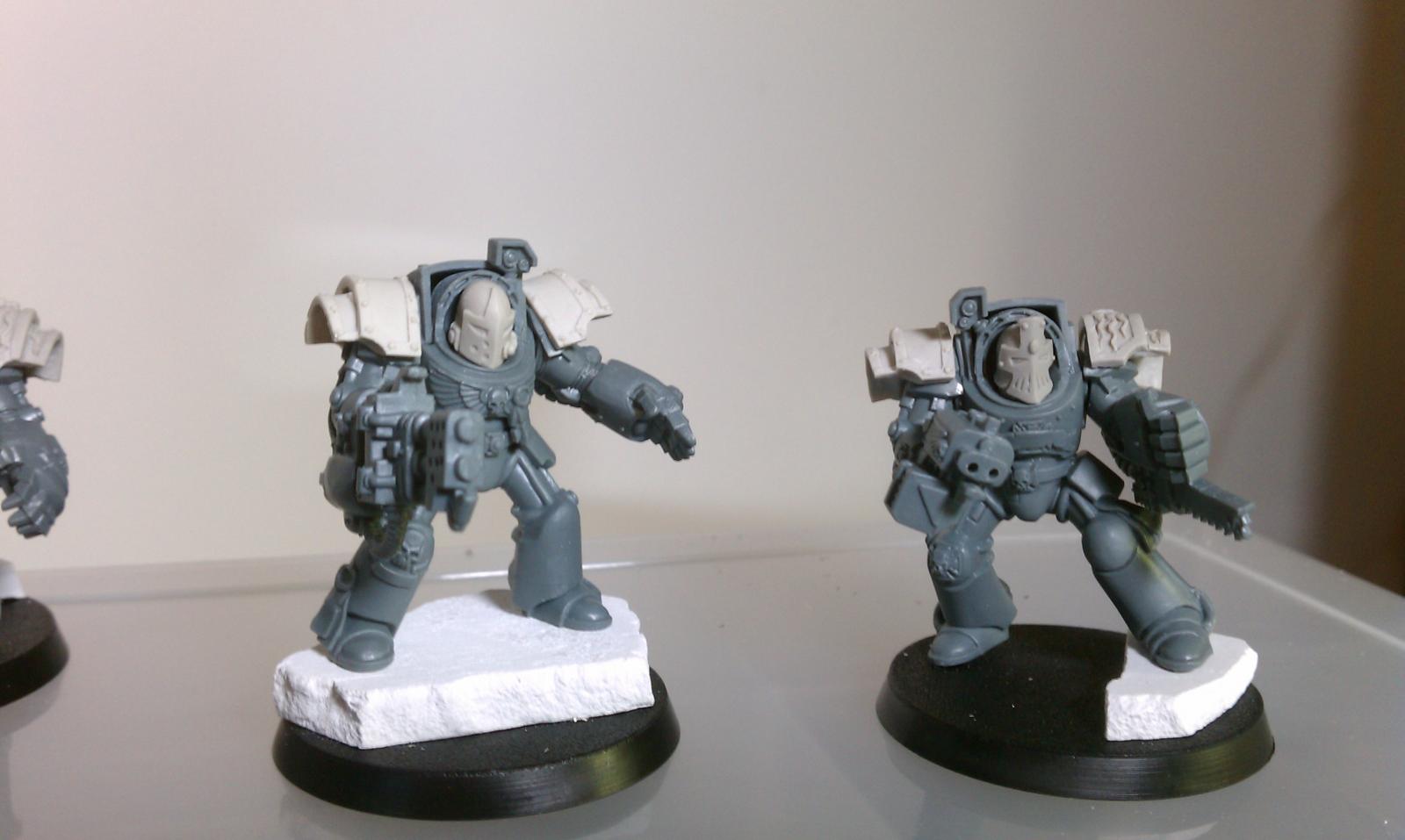 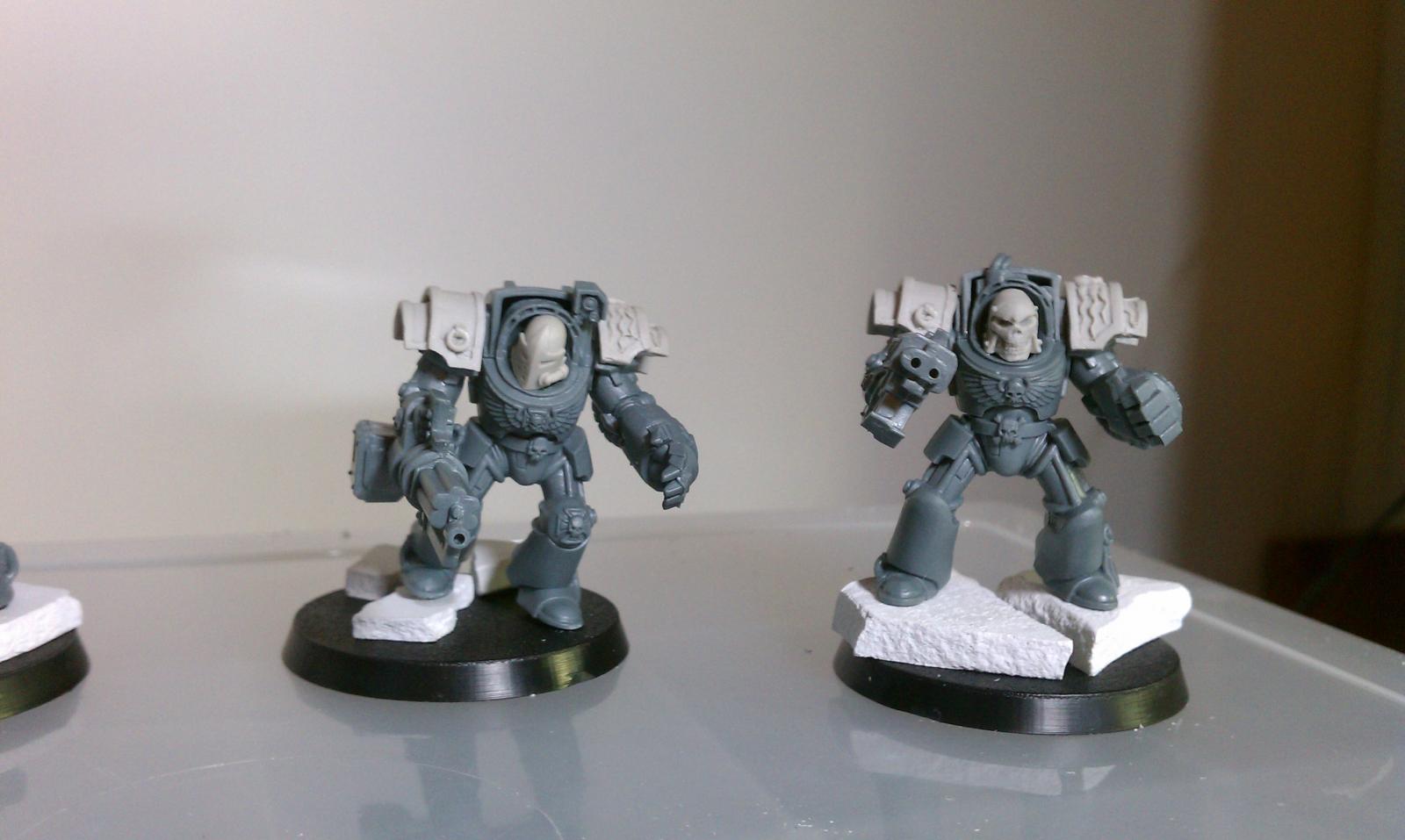 Ok, Firstly: I am having trouble deciding on what company color(if any) to put on my Silver Skulls! So the first pick is a test of green, gold, and no shoulder trim.
Please let me know what you think!(even if that includes suggesting a different color than I have tried!) 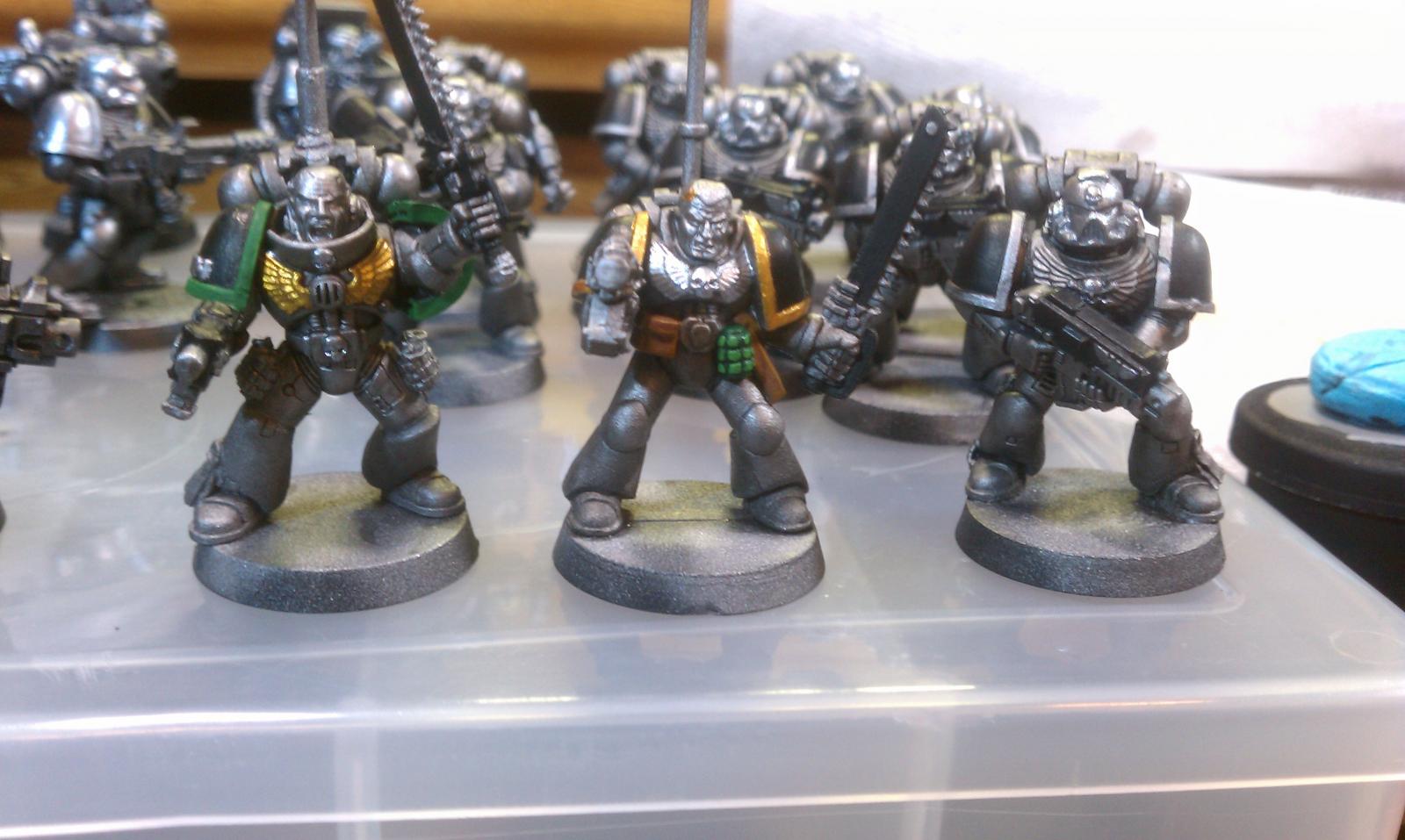 Next two pictures are tests with helmet color effects. The first may be hard to see but there is a little thrakka green wash under his eyes for a subtle glow effect and the second is using GAR's blue tinted silver helmets to make the marines stand out. What do you think? 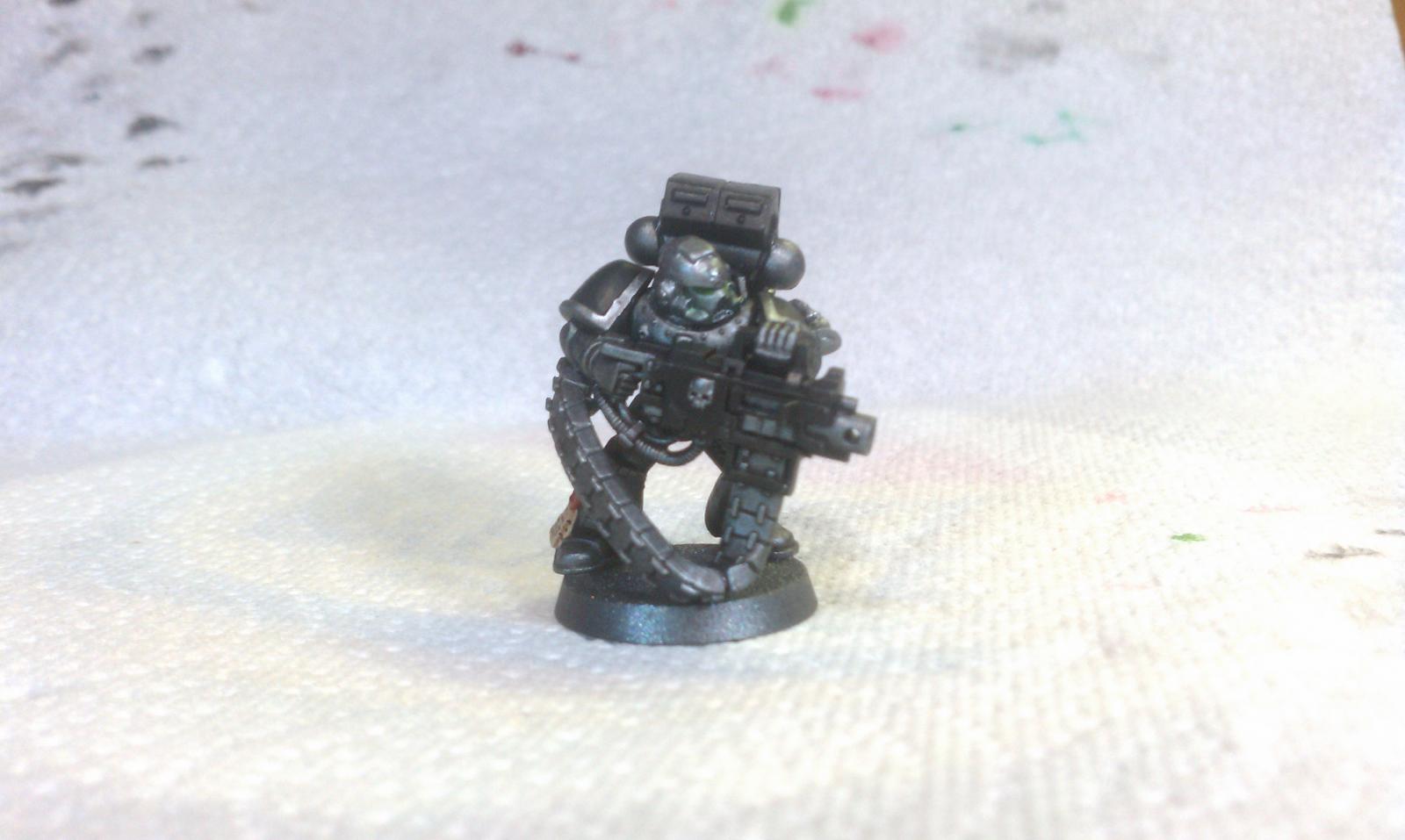 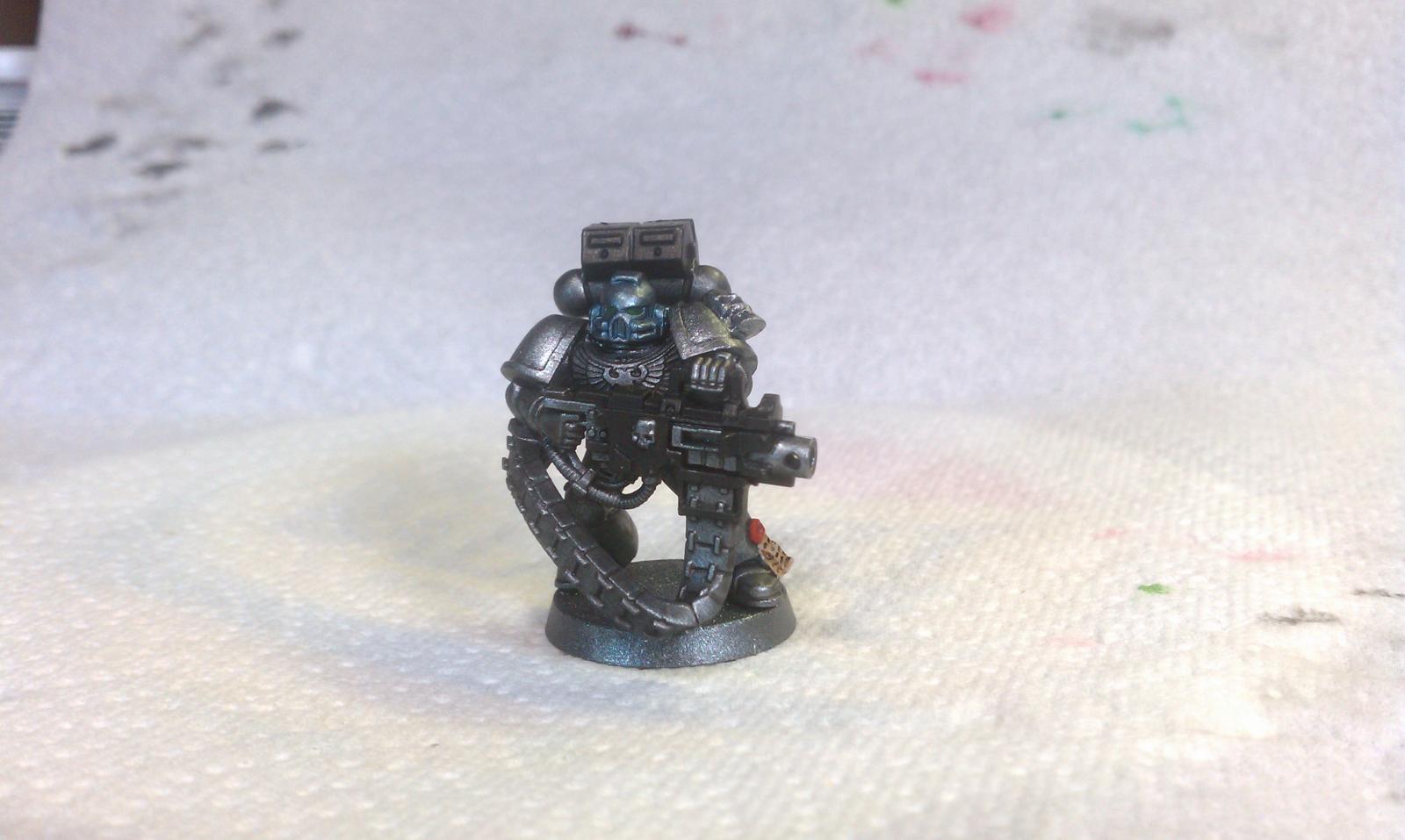 Any and all feedback welcome! I love the simple base paint scheme of the Silver Skulls but I feel I need to find a way to put a little more color on them, so if you think any of the things I did here in these pictures works, please let me know. If you have another idea please let me know that as well.

Wow, that is a great mini! Such a shame to send him to a watery grave! I hope mine turn out that nice when done!