107 replies to this topic

Turning this thread into a reliquary for all my Unforgiven work. Did some house cleaning of WIP Belial photos from below. First up is him all finished: 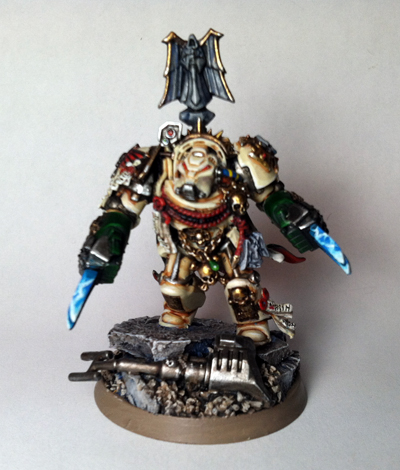 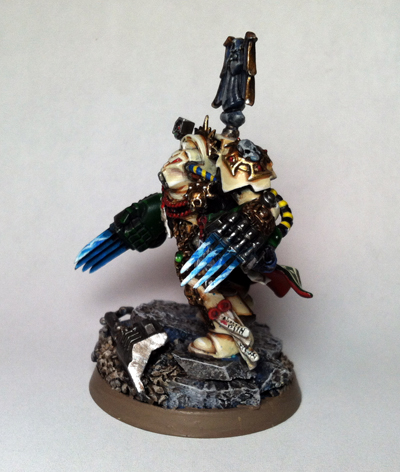 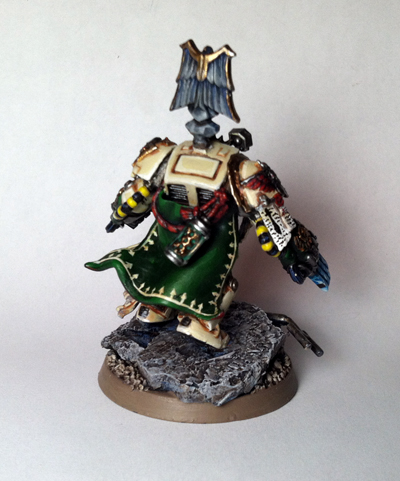 Here is the pre-paint version that I put together quite some time ago (A couple things changed. 1. I opted for a larger back icon and 2. The sword just wasn't fitting right. I also went back and actually removed the space hulk "base" so he sat better on his own 40 mm base): 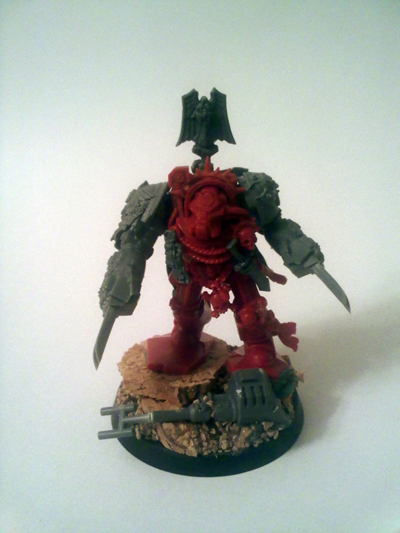 [original post: I was thinking about cutting the stem of the icon off and mounting it where the rock starts, directly on his armor. Seems too tall, but I certainly wanted it larger than the original (as some of my sergeants have the smaller size already). Though people often mount entire back banners to them, which are much larger... Thoughts?]

I think the back icon is fine - leave it as is. Really like the blue/yellow cable coming out of the helmet. I have to tell you the work you've put in this Termie shows! Excellent conversion and the removal of the SH base is done very carefully! I think the LC was a good choice too... It's the meanest, coolest looking termie weapon imo! I also like the choice of the base figure... As SH termies go it's one that has the most movement - a great pairing with the LCs...

Is the ceremonial blade the knife from the Vets box?

It's a really cool Belial, it has the right amount of bling.

Thanks Semper, I can always count on your for some positive reenforcement.

The knife is from the Upgrade Sprue (or yes, the Vet box). Now that I think about it, I don't think I liked the fact that it was unsheathed, so I tried to fit on a sheathed knife (from Space Wolf bits) and that's the one that didn't fit right, so in the end I simply replaced it with another DA icon.

Thanks Lucifer - though I do suppose that's a lot of gold hanging down from his waist - luckily there is at least that one gem to paint to hopefully break it up a little.

Speaking of which, anyone have opinions on the gold bits? Think I should add some verdigris or leave them nice and shiny? It is said that the crux on a terminator master's armor actually has some of the melted down Emperor's armor in it ... surely that is too blessed to ever become blemished.

No verdigris. Gold doesn't get that.. You can however enhance teh golden parts with a light drybrush of mithrill silver. Makes gld look shinier.
Verdigris is used on brass/copper.

I agree with Chaplain Lucifer - no verdigris. It's Belial after all! His armour must be in pristine condition!

Not sure how well it shows, but it went like this -

Thanks - and also a slew more little details to drive me crazy while painting.

Fantastic Belial, great job on the modelling and painting - can't say more than that

Wow. The best thing is the pose. Looking menacing and badass, very natural.

Thanks all... I guess once I finish Belial here, I'll turn this thread into my command squad log as well.

I agree with the others, a really nice LC/LC Belial.
Get those claws painted up nice and brightly to lead the eye toward the dangerous bits and he'll look awesome.
I agree with your thoughts on the icon, chop it shorter. Belial can have other bling to make him special, after all he has an iron halo up there too (just for looks of course).

... he has an iron halo up there too (just for looks of course).

Sadly. But hopefully that will change soon!

And the command squad, still a work in progress. I might finish the basing and start painting them while I finish modeling the rest of the shields (was going to leave them off for painting anyway).

Belial looks great EPK, I'm liking all the extra bling he has to carry around.
The Comd Sqd looks like it's going to be wicked too, that zany SH dude with the flail/morningstar looks damned dangerous.

Nice looking squad was about to say the same thing as Stobz about the terminator with the flail, looks dangerous.

The iron halo over the head piece on belial is a nice touch and the lightning affect on the claws is great.

That power flail idea is soooo totally being stolen!

Seriously, that is some awesome converting on those models! They've got tons of character and flair. I look forward to seeing them painted and next to your exceptional Belial.

The Angels of Retribution

* The use of green for Belial LCs was an excellent choice! Looks really, really good and provides an excellent base for the metallic contrast
* The lightning effect is very succesful. I'm green with envy!
* On the negative side, not a big fan of the purity seal on the chest. Like the writing don't like the extra dark (almost black) core. Now unless the picture distorts it I'd suggest adding some deep red there...
* Termie's poses are fantastic! The power flail is pure win!!! Great idea, and great execution - this guy will be famous... a refernce!

I tried the "list" code for the first time...

Thanks all. Good call Semper - I'll hit it with a touch of mechrite red. That's a deeper red and is what I use as a base for all reds.

That SH mini with the flail is one of my favorites too. I'll have to get a shot of him with the shield tacked in place - so much motion. It's like he just shield based the hell out of an enemy and is about to follow it up with a crushing blow from the flail.

Here is another completely different WIP... but it is Deathwing!

Okay, Belial is complete. I'll probably see spots to touch up after looking more closely at these photos, but for now, I'm done. I tried using a piece of paper in from of my lamp to diffuse the light - not sure how well that worked, but here goes -

You know, this is a very VERY well made Belial. What have you done to the gold bits? They look amazing... he shine is so super effective especially in contrast to the stone angel on Belial's back!

Kudos on the robe - obviously. It's not only the detail of white spikes but the shades of green you made there. And the text on the purity seals? I swear I tried to read it!

Good think you fixed the purity seal on the chest - looks way better this way!

Now on to the power flail guy!

And here is a few shots of that Space Hulk mini turned Deathwing with his Thunder Flail. Let me know what you guys think. Obviously I'm restricted a bit on the pose here, but does the shield sit okay like that? Sort of like he's basing and winding up for a flail swing? 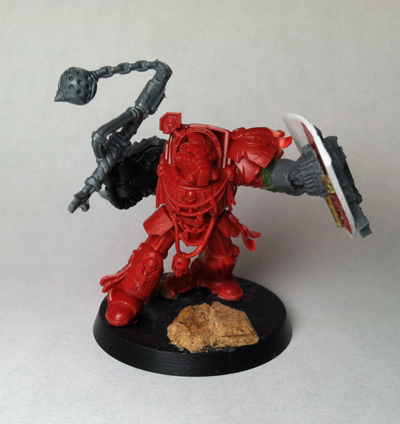 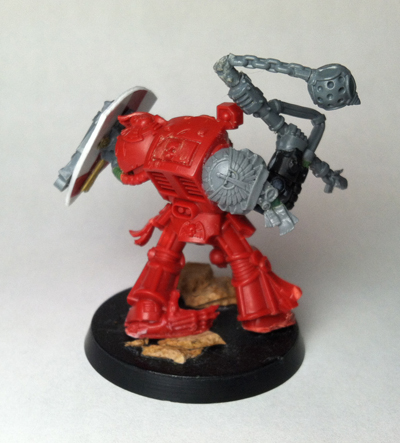 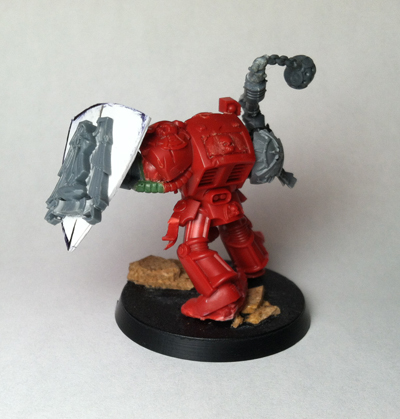 The shield is okay but the flail is not.. with taht position of the arm he is ready to strike but the flail direction is looking wrong IMHo. I think that the flail backwars would give more of the idea that he pulled his arm back and was beggining to swing the flail on whatever he is bashing with the shield.

After the earlier WIPs above, I realized I had burnished gold in my paint box! I went back and did a little touch of that... so I think it would go something like this with that in the mix:


Good point Captain Lucifer. So you are saying, like this? 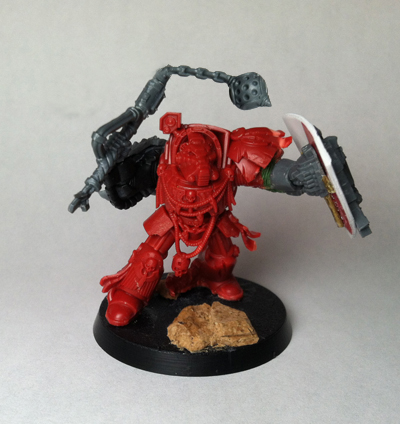 My Unforgiven | Consecrators Development Thread
Back to + DARK ANGELS +