71 replies to this topic

@Augustus: Thanks! I don't get the gist though, sorry

Again brother your WE are spectacular, I would have you show the steps taht you take to get them to this standard as I will start my WE force in earnest soon and i am looking for examples of how to skin this particular cat. that is if you have time.

@Augustus: Thanks! I don't get the gist though, sorry

I'll give you a hint.

Again brother your WE are spectacular, I would have you show the steps taht you take to get them to this standard as I will start my WE force in earnest soon and i am looking for examples of how to skin this particular cat. that is if you have time.

My method is very fast and simple.

I start with a Ceramite white base, with bolter, backpack and shouldpads not yet glued at the moment - those will instead get an Abaddon Black base.

When the white is done I wash the whole model in Nuln Oil.

After that, I drybrush it with White Scar - and the armour is pretty much done, you can add battle damage (I do it with three layers: Black area, smaller 1:1 Black/Silver area inside of it, smaller again pure Mithril Silver area. Like Matrioska!) and paint the joints black.

As for the eye lenses, I just paint them red.

I'm not that awesome painter

Coming to the shoulderpads, I paint the trims first (currently with an old Valleyo gold... you can use any tonality you like, really) and then the inner part with Kantor Blue, and those are then highlighted with the same colour+a very small touch of white.

Then I usually wash the whole shoulderpads with Agrax Eartshade - works great on gold, and adds that little depth between the trims and the blue.

Just drybrush the bolter and you're done!

Regarding blood, I'm trying a lot of different options.

Currently, I'm toying with Vernidas on Red Gore... it needs his own brush (which will be consumed by it 'till destruction, just like a World Eater by his Nails!) but it's not that bad, making the blood shiny.

Plus Vernidas is quite cheap and lasts for a loooong long time.

But if you can put your hands on some Blood for the Blood God, go for it!

Once I'll start painting the next batch I'll put some step by step pictures.

Hope to be of help!

The picture does not show them very well because of my not so encouraging skills as a photographer, but the pf has some small areas that look like encrusted blood, and I like my Kull remarkably more.

I have to thank you

Second: I'd like to show you gents a kitbash I made yesterday.

He is Borg, Pitchampion of the Merciless.

I wanted to give him a gladiatorial look, and I am quite pleased with how he came out.

Granted, a boarding shield would make him a perfect secutor...

I painted these bad guys.

Next are 15 Astartes from Tactical Squad Rhaskos.

I'll take some step-by-step pictures for you, Warder.

I didn't do it with the Butchers because I though it would be better to show it on regular marines, hope you'll agree!

Love those Red Butchers! You truly do our most insane Legionaries justice! Your World Eaters were one of my main sources of ispiration since I started this topic.

So thank you x2, Relict!

That makes me feel all warm and fuzzy inside.

*Revs chainaxe* Ahem. Glad my World Eaters were able to serve as an inspiration. Now get to the slaughter!

And here is my (almost) step to step painting method as requested by Phalanx Warder:

4)Shoulder pads: black base, then kantor blue inside

Hope it can be useful.

Rhaskos is looking good. Great work on the blood spray - especially on the sergeant!

The only thing I hated more than painting it, was building it <.< 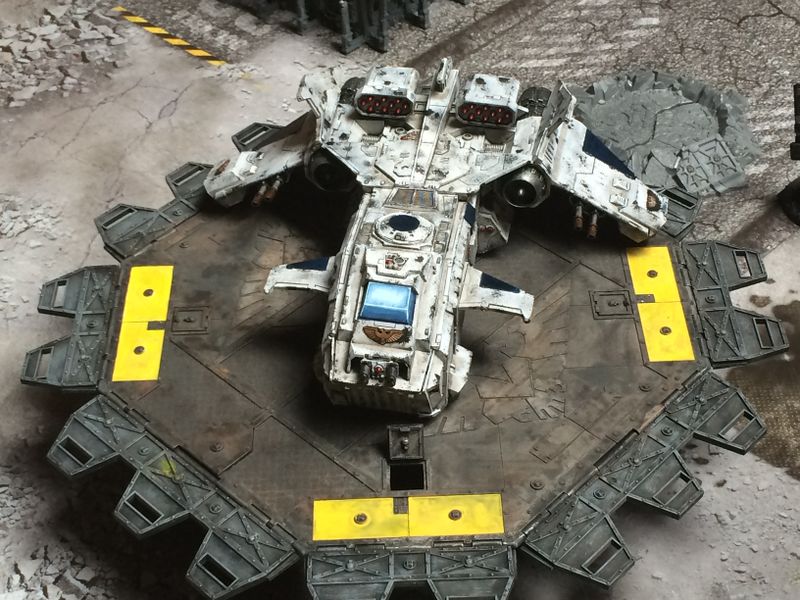 How did you get that pretty sky blue color on the canopy?

How on earth would you hate building and painting this beauty?

@Flint: Thank you! Kantor blue base, then several layers of Kantor+Ceramite white, with the proportion growing towards the latter every time. Always going on the inside, to the inner part is almost white and the borders are Kantor blue.

The edges, then, were done in the same way!

@Augustus: I'm no good at painting tanks. NO good. I'm more of an infantry guy!

It doens't show, buddy. You did an excellent job. Even though I prefer transparent canopies, as Flint also said, I think you couldn't have done a better job doing an opaque paint job.

Small update.
Today I decided Mr T. (fools!) deserved better than a regular base and a "not even veteran" mk II helmet.
So here I give you Centurion Thanatos version 2.0 :

I have to say, I'm quite satisfied of him now.

Words cannot show how much I love that model I know that I'm buying myself a heavy chainsword now. I love you paint scheme a lot more than the forgeworld one, it has a more gritty feeling to it. Love the red butchers. Will we be seeing Khârn soon?

@Augustus: Thank you, mate! That was so encouraging I am already working on my dreadclaw

@ThatOneMarshal: Glad you like Thanatos! I invested quite some time in making him, both in background and in miniature.

Therefore, my heart sings every time someone appreciates him!

By the way, Khârn is ready as well as Angron.

They will be in the next update, as soon as I take the pictures!

I used a lot of different techniques really

When I started, I used Blood red (Mephiston red now, I think?) with a wash or two of Agrax Eartshade.

It gave it darker edges and a shiny look: Then I tried do follow Flint's tip to use several shades of blood, from essicated to freshly spilled: Starting from bown, apply different layers and splatters down to pure Mephiston Red (at least, this is how I interpreted it

) which then I covered with Vernidas, again to obtain the shiny sinister look that I love:

At the moment, I'm simply trying Blood for the Blood God.

Mix some Agrax and/or sepia to bftbg it works wonders

Your World Eaters look great brother. I have been experimenting mixing valejio smoke with Tamear Clear Red to get a dark dried blood, with blood for the blood god as my fresher colourm

Thanks for the tips, guys!

I'll sure try them both.