257 replies to this topic

Welcome to the 10th Edition of the Dark Angels Forum Arena of Death!

Why tenth? Because it started 10 years ago when I was promotod to DA mod. It had 2 editions but not more unfortunately... This would be the tenth edition so I figured it would be fitting and cool to name it that way.

What is the Feast of Blades?

The Feast of Blades is an event were DA players chose their DA champions to fight against each other until only one emerges victorious and it's crowned champion.

How can I participate in the Feast of Blades?

It's quite easy. Submit a photo of your dark Angel champion along with his equipment (chosen from DA Codex) and a brief biography of him.

When does it start?

The Feast of Blades event will start in the 1st of March. You have until that to submit your champion to the contest.

Perks you can buy (One per character):

Contestants start 18" from each other.  To see who goes first a D6 and added the characters Iniative. The model going first will get to move, shoot and assault. The model being assaulted can overwatch at full BS.
However if assault fails the model that overwatched can't shoot on his shooting phase. Combats will be resolved just as a normal 40K combat until one model is left with 0 wounds.

How will I know the results?

A battle report after each battle will be written describing the battle.

If there are any questions that I did not clarify enough or doubts you have I will add to the FAQ.

Can people only partake in this event if they have a (real life) opponent to fight?  Or do you generate the rolls for each turn via the interwebz and we can play against all who enter the competition?

Sorry for my confusion - just I dont have many, if any, people near me to partake in this event, but its an event that appeals to me!

Everyone will submit a character and I will take care of the rest: pit them against each other and post up the results in the form of a short story. People only need to put up a WYSIWYG picture of the model. his equipment and total points cost and a story.

Thanks for clearing that up

This sounds really good. il submit my company master in a few days.

Welcome to the party. Looking forward to see the submissions.

Yes! Good to see this back. The only question is which character I shall use.

Lol, too bad I can't use this guy:

Do they retain toughness modifications and equipment that was on the bikes (i.e. TL Bolter or Plasma Talon).

Do they retain hit and run?

"Fear the Dark Angels. They have not the zeal of Black Templars nor the savagery of Space Wolves but something more fearful. They do not give up-- no matter what. If you anger them, prepare to be hunted across the galaxy for they will never stop the chase. I have called for their aid. I will die knowing that you shall suffer a worse fate than I."

"Give me a gun, a google-eyed alien to shoot it at, and I’ll die a happy man."

They retain nothing from the bikes. But retain USR.

If armed with a Porta-Rack can a character gain Preferred Enemy: Dark Angels?

Extremely patient, Guriel will stand his ground and shoot as many times as possible, but will advance and charge if his opponent fails his charge.

Company Master Guriel was the protégé of Grand Master Arariel and now carries his Master's Storm Bolter.  Arariel once fought and won a tournament and Guriel now fights to honor his Master's memory*.

*True story, there was once an older tournament on the boards by Grand Master Belial which Arariel won. Does anyone remember this? The link with the Storm Bolters was just too good to pass up.

If armed with a Porta-Rack can a character gain Preferred Enemy: Dark Angels?

It would be nice but every duel starts from a clean slate. So effects don't carry from duel to duel.

You were the first one to sign up completely.

First entry of the First Legion? I like the sound of that.

"Will no one stand before me?"

Interrogator-Chaplain Tancred, currently serving a tour with the Deathwatch has heard the call of the Feast of Blades, and returns from deep space to The Rock with an appetite! Tancred's role within his Deathwatch unit is to be the man always in front leading his men headfirst into the Xenos filth!  He will always try and close the gap and get into combat to take advantage of his zealotish nature.  The plasma pistol firing as he charges in to complement the Mace of Redemption in close quarters dueling. (Magnetized models for different poses is perfect for this

Kadmiel is the Angel Executioner of the 4th company.
Its main mission is to decapitate the enemy chain of command with a quick and bloody assault.

It's possible to present many contestants for 1 Brother ?

Very keen on this as I have always wanted to model up a beefy Company Master. Is Artificer Armour allowed?

Sure it is, that's why I brought my Axe.

Master Caleb of the Eight Company:
Excels at keeping the enemy at arms length until the time is right to strike, and when he strikes it's with the mighty Hammer of Wrath. In game terms, if the opponent has an AP2 weapon Caleb will withdraw to keep him at 18" and snipe with the patience of the Lion...i.e. all day. If not then Caleb will close and engage in CC.

Pic to follow....(will touch up his old paint job tonight)

EDIT: Had to drop his Plasma pistol, I added him up wrong 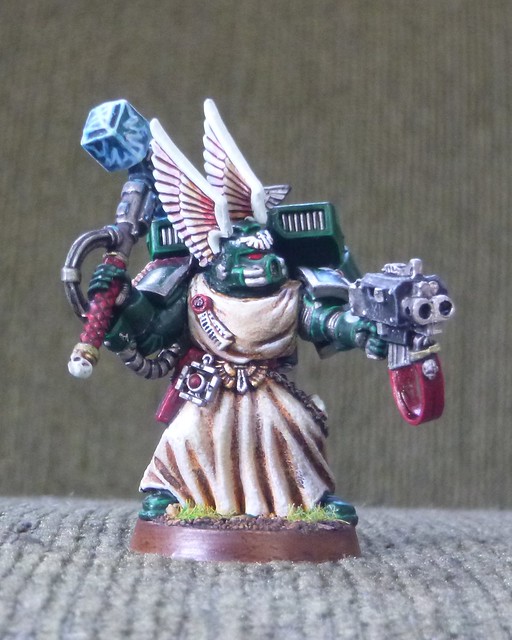