Scythes, pestilence and a bit of iron.

I recently posted this before... but I decided to launch a sort of wip thread, aswell:

So, this is my very first Post to the b&c. Hello, everybody! Anyways, I dropped out of the hobby back then, when the 2007 chaos codex got released. I tried to get back in a few times later then, but it never really clicked with me. To my surprise, My brother started playing and painting regularly. So, I bought a few models, he gave me the latest codex and I build a few iron warriors. It didn't really get me though, once I missed those specific legion stuff from the older codex. Due to some weird circumstances, I went to a lokal store, sa a Typhus model. Bought it right away alongside a few plaguebearers, a hellbrute and some colors and here we are. I digged out my old Death Guard Army, painted a good bunch of models in the last three weeks.... and it made click again.

I finished a couple of new models and well, today I had my first game around 1000 points, against my brother old tzeenth things, which he hadn't pulled out in years, anyways. The full army yet, included my brand-new lord model.

A closer shot of the new lord, and yeah, I bought a waaay to large base, but hell.

The first game went quite okayish, I guess. I just start to dislike the Psychis Phase and Ahriman, anyways. 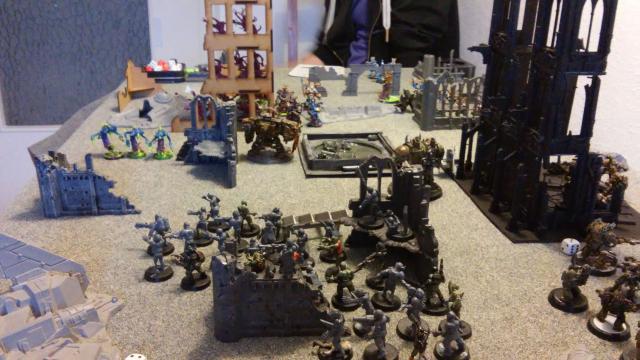 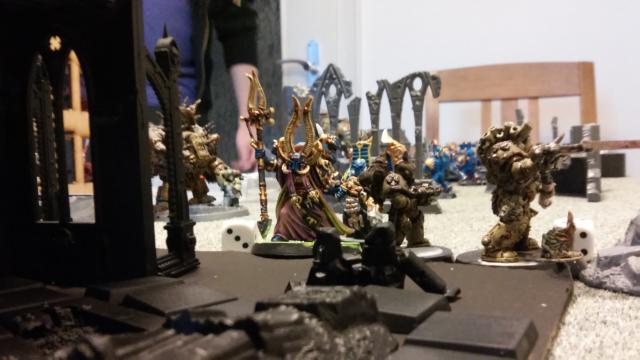 Oh, and since I bought a Betrayal At Calth set, I'm going to go full pre-Heresy Death Guard, aswell.

I guess we have to wait patiently for your Heresy guys. Don't make us wait too long.

Keep up the good work

All I can say is welcome to the XIV. The stuff looks sick, diseased and manky. DG through and through. Well done!

Welcome! The picture of your whole army looks amazing (i love a nice armyshot). I hope you keep updating this thread.

Thanks guys, and nice avatar Mehman! 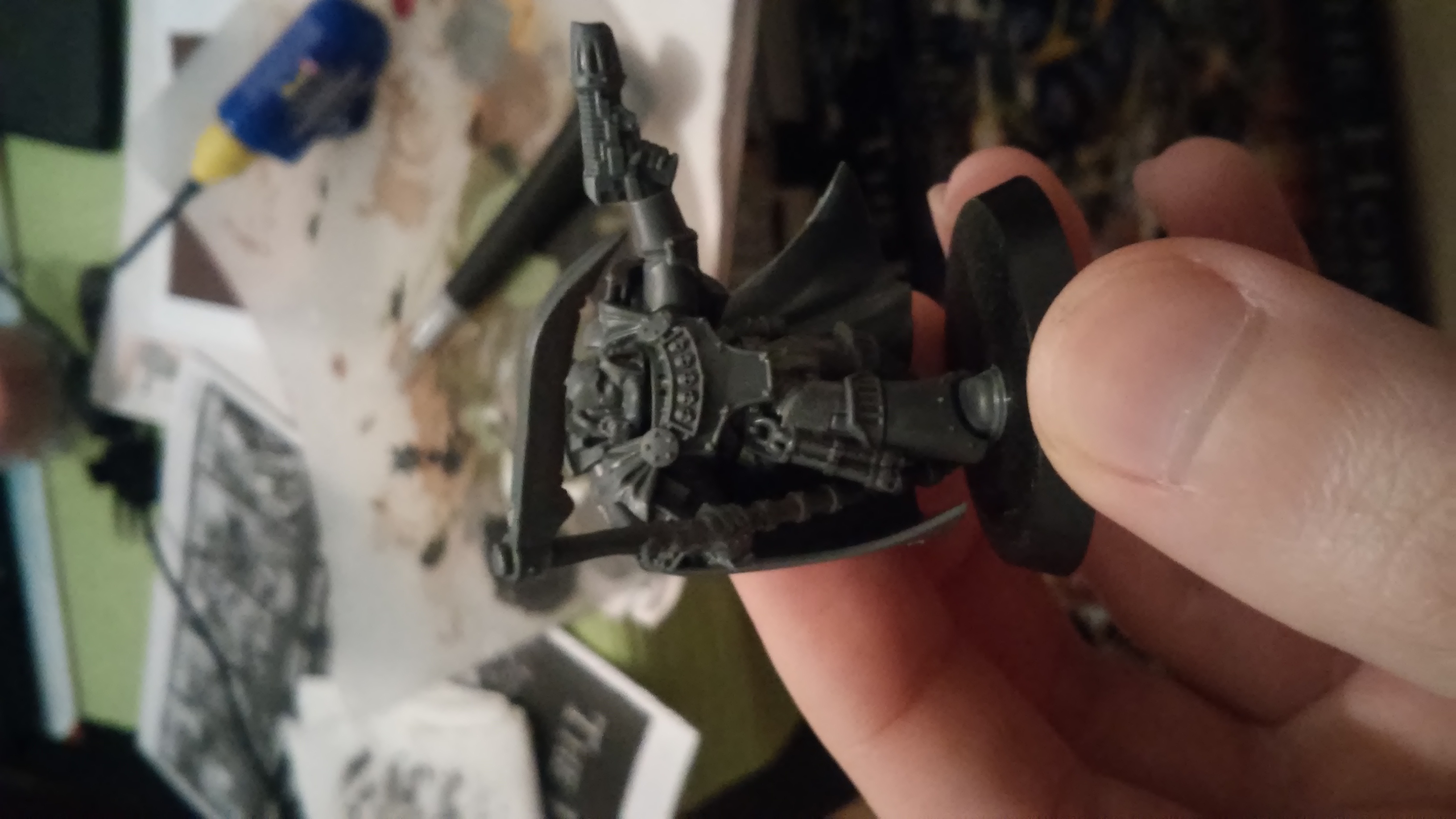 Just did a quick weapon change. I guess I'll need to change the plasma, too. Since it's a twohanded weapon, eh?

You don't necessarily have to drop the Plasma Pistol. I figure he has a holster or he can mag-lock the pistol to use the scythe. Rule of Cool wins again

That's a nice conversion/kitbash/whatever it's called! It's simple and effective. What is he supposed to be for your army? I hope it's a Chaplain

The scythe and head swap worked wonders, cant wait to see him painted up.

You don't necessarily have to drop the Plasma Pistol. I figure he has a holster or he can mag-lock the pistol to use the scythe. Rule of Cool wins again

That's a nice conversion/kitbash/whatever it's called! It's simple and effective. What is he supposed to be for your army? I hope it's a Chaplain

I honestly didn't think about running him as a chaplain, but that's a great idea. In that case, the scythe would be the Legion's version of a Crozius Arcanum. Simple and perfect and a brilliant excuse for the pistol.

The scythe and head swap worked wonders, cant wait to see him painted up.

Yeah, it looks a bit different and more unique, I think. I'l just have to buy a bunch of new colors, nearly ran completely out of everything.

Since I've been away on the nidrosian black mass and a few other gigs, I didn't had any Time on my hands. Anyway, here is my first test model. Got carried away a bit with the Sepia... That looks mighty proper for a Death Guard! If you want to add some battle damage (and who doesn't?), grab a piece of foam tray or even a household sponge, dip it in Stormvermin Fur or any other dirty grey paint, dab most of it off on some kitchen towel, and then apply it to the whole model with focus on the legs. They see the most wear and tear.

Keep up the great work

So, I'm sick and therefore not at work. Here is todays result. Obviously all is still wip. 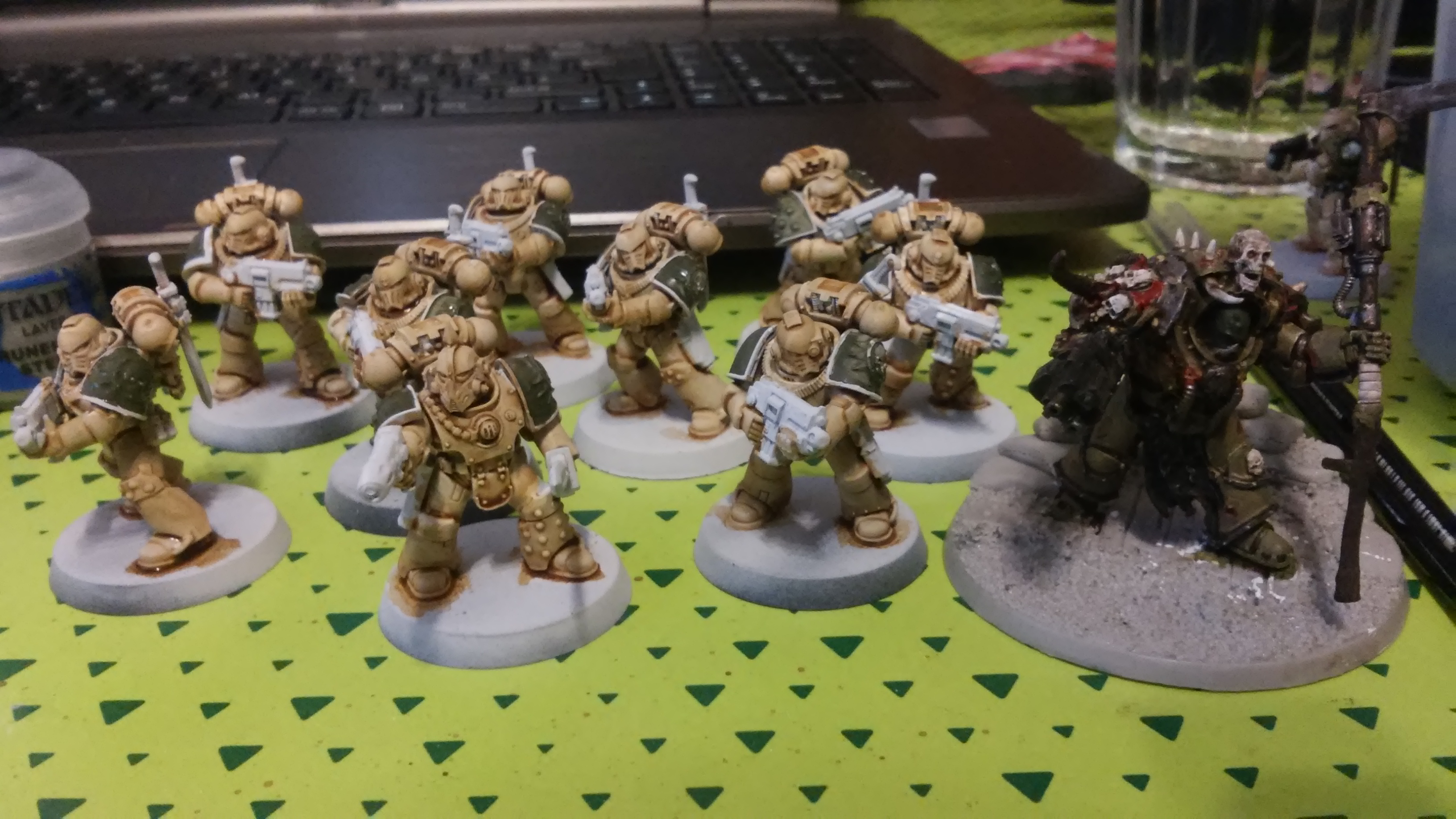 Well, I haven't been updating since a few months, but well. I got stuck somehow on my Heresy Death Guard and aswell on my large blob of Zombies, which I was working on. Why? Well, I visited my parent's place over Christmas and found an old box of old figures. My Iron Warriors. Anyway, I did spend quite a few time stripping down the colors on old models, getting a few new ones and sloooowly starting to repaint 'em. Anyways: This is what I gathered so far: Everything is WIP. Same goes still for my DG stuff, which I will get back to soon, I think, haha. 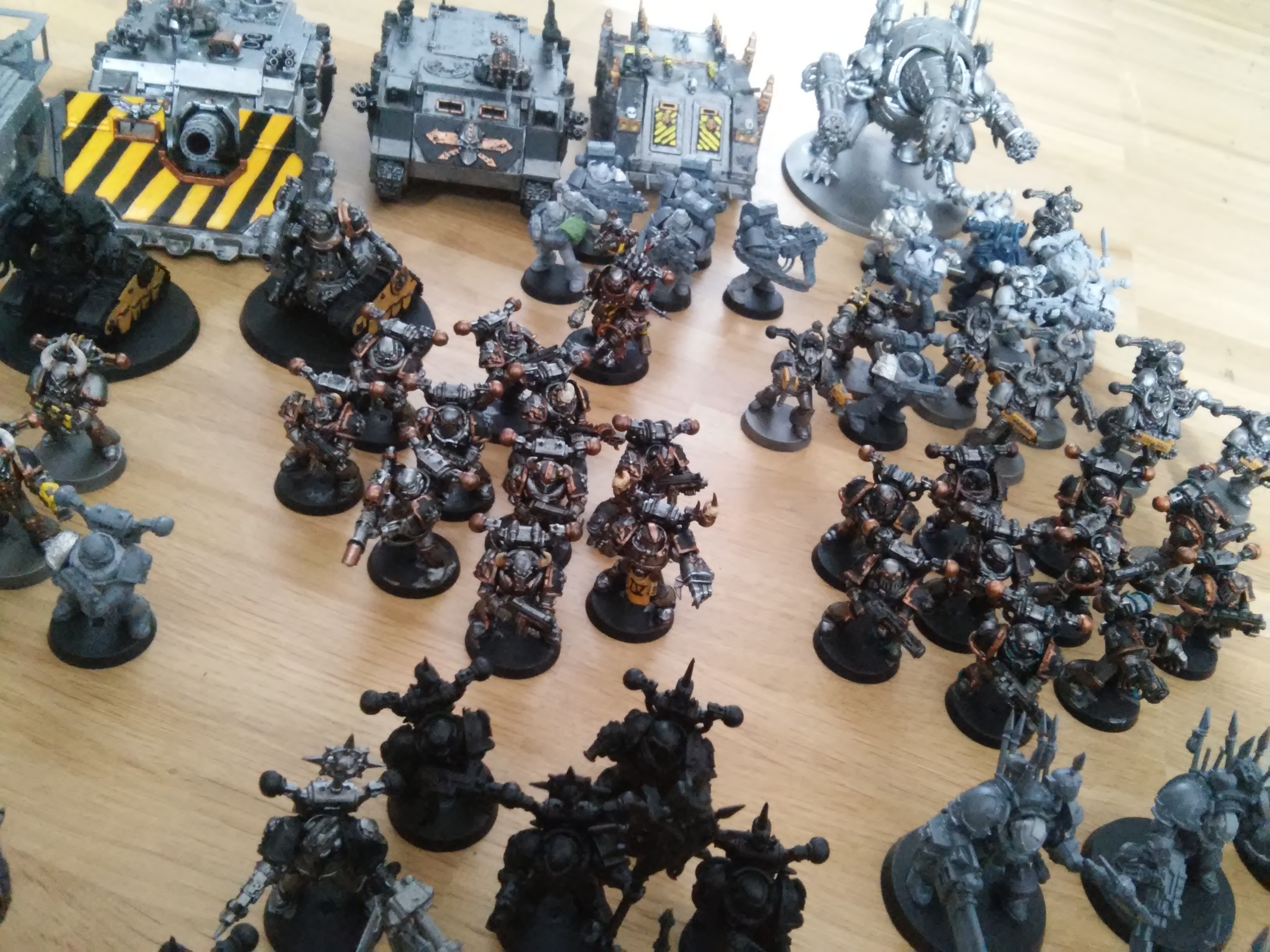 However, I did run a few test games for my Iron Warriors against my brother's Blood Angels and, well, to be fair, he did some pretty bad dice rolls and I basically bombed him off the table. My list was pretty simple, I guess. A prince, a general, a vindicator, a squad of obliterators, 3 squads of csm without any marks and basically just meltas and maybe one heavy weapon, a forgefiend and a squad of termis. I had luck.

So, I managed to find some time to start the work on my Lord again... not finished, but getting closer. 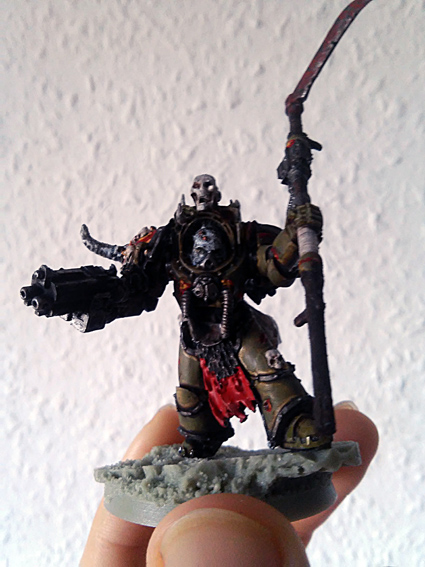 I was digging through my old army and just thought, I'd upload a few closer pics.. 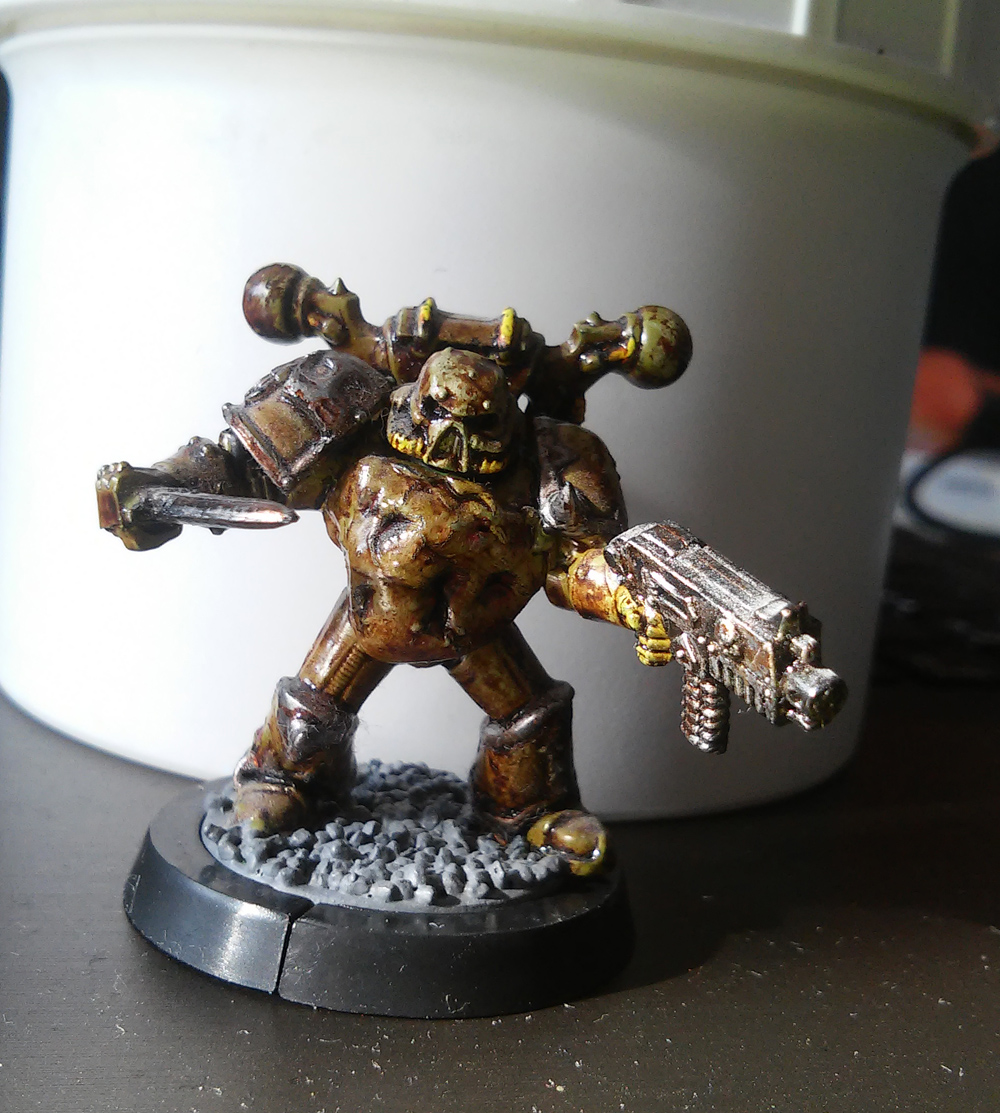 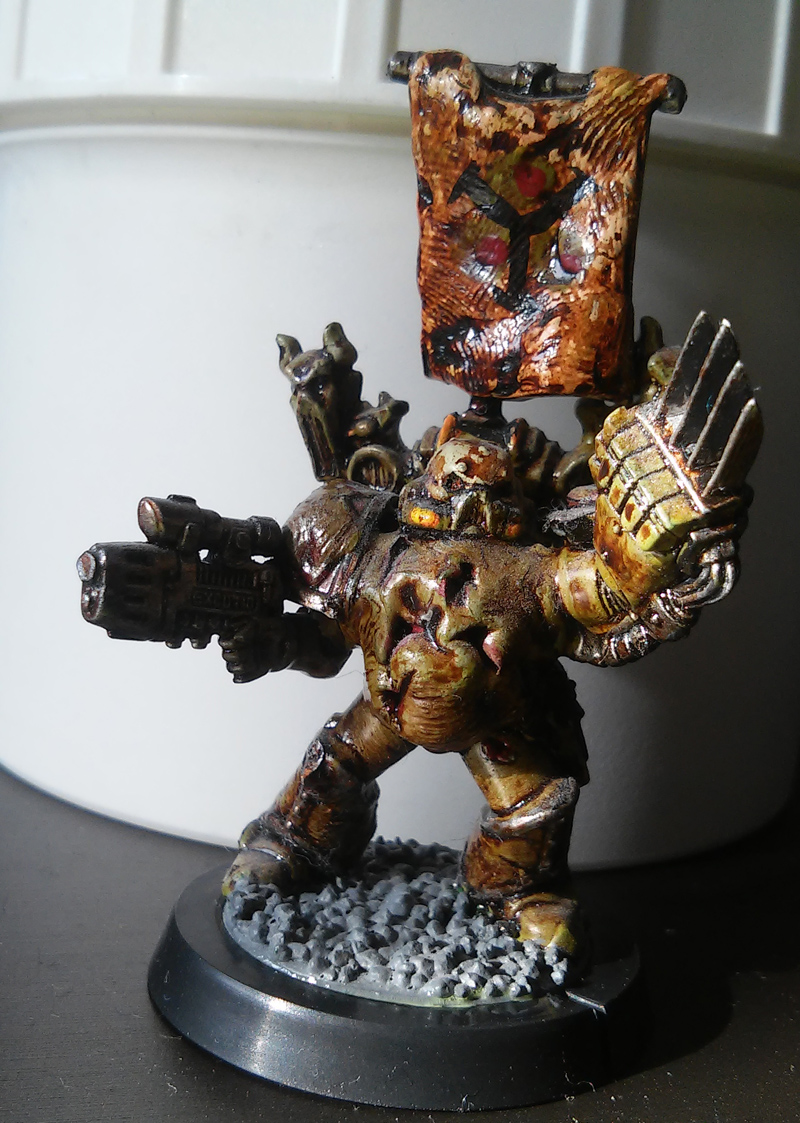 I´m really slowly making little progress with my HH force. I set myself a limit, not to buy any new models until, I´ve finished the army. Well, that seemed to work, but on saturday, I was already downtown, so I ended up buying one Tribune. Well, two actually, as my brother bought me another one. So, one is for conversion anyways. I exchanged his head (not to keen on the original head) and gave him a more Death Guardish-weapon, a scythe. It worked out better than I expected, so I´m looking forward painting him, haha!

Also, I experiment a bit with my color scheme and I finally come around to a DG scheme I like and am able to paint. You might be able to see it in the background. I think it looks way better than my sloppy first attempt, somewhere in the previous posts.

However, I´m still looking at about 35 marines to paint, 2 contemptors, 5 terminators, a chaplain, the termi praetor... and buildings, haha. Oh well... 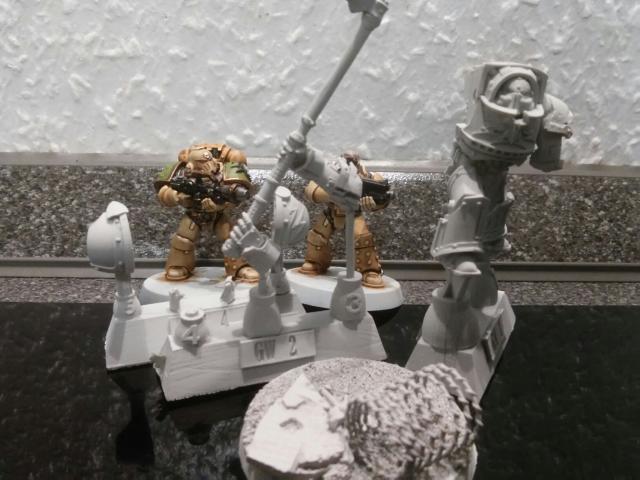 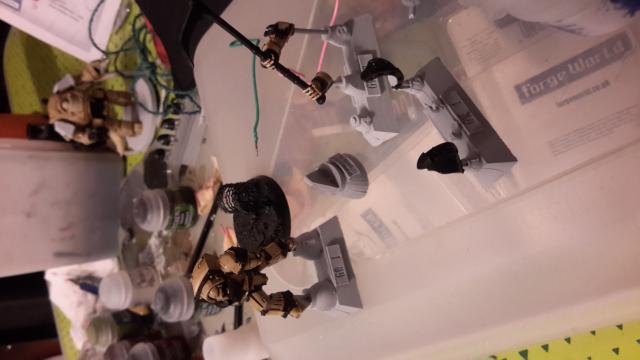 How I spend my morning. Can't wait to get back from work and continue. Also, I noticed, that I don't have any suitable colors for the Base left, so I'll need to rebuy a few.
I already wanted to get so far last evening, but I managed to lose my Phone and spend the whole eve searching- it's still gone. Which suck big time. 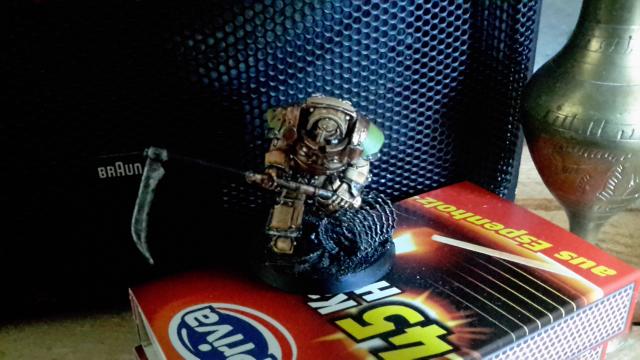 And here he is, nearly finished. The leder of my pack. I thoughtfulness about something fluffwise like uncleared origin (according to imperial archives), uncleared role during the heresy, however only loyal to Mortarion, therefore assumed of Barbarus descent. Last official sighting during the siege of terra, fighting alongside his primarch; is later marked as fallen during the siege in the imperial archives, although the are certain rumours about a silent reaper during the ages up to M41. Reappeared at several Moments during the Cadia Campain, often alongside Typhus - which might be a hinter towards the return of the Mortarion.

Would be a good excuse to build my second tribune into a siege of terra or M41 version.

Does that make any sense fluffwise? I haven't read much besides the codices and the old IA, to be honest...
and anybody got a good Name idea?

So, I completely my first BaC contemptor. I was really unimpressed with it's look, but after adding some mud and damage aaaaand doing the base, I think he looks fine. My second one will need more extras though... 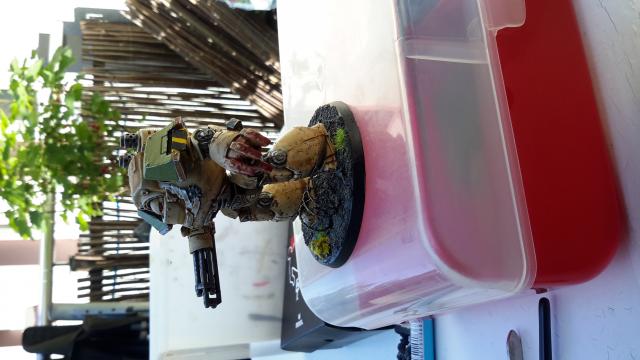 Not a big update. But I´ve managed to paint my second BaC contemptor. Third one is basecoated already, and he´s converted a bit more, to kill that static look. Anyways, I just turned the body a little bit on this one above and gave him more damage and weathering. 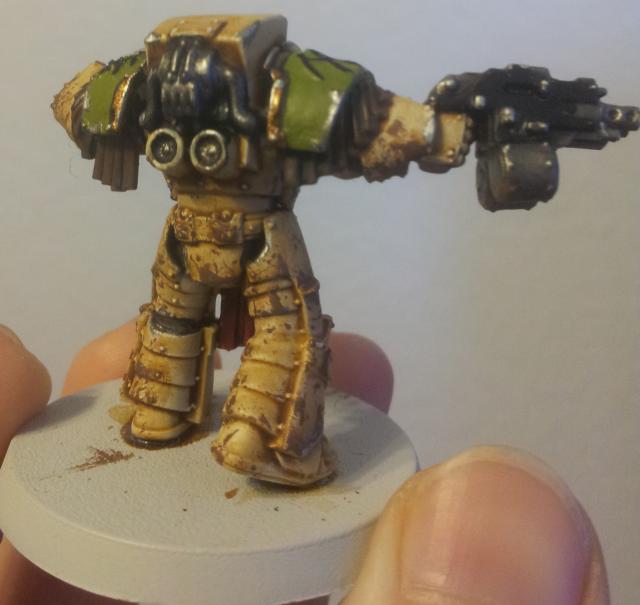 And another one is added, except for the base... ONWARDS!

awesome looking army man. where are you getting all your scythe bits from? i could do with a couple. is it the Vampire wraith clamp pack?

awesome looking army man. where are you getting all your scythe bits from? i could do with a couple. is it the Vampire wraith clamp pack?

Those sycthes are all from the Warhammer Fantasy/Age Of Sigmar Zombies Kit. I had a bunch left, when I worked on some Plaguezombies.