Brotherhood of the Shattered Spear

253 replies to this topic

It's mainly to build a cool looking Keshig in power armour, but I'm considering a pair of power glaives (I know, power axes...), one with two Scimitars (counts as Lightning Claws), one with a power maul and combat shield, and the standard bearer with an axe. Eventually they'll ride in a Land Raider with the Khan whenever I feel like running an armoured breaktrhough with my Glaive and the aforementioned preds...


Don't you mean ride ON a Land raider

Heresy Era Lords of War; use this to find out the complete collection of available Lords of War for Battles in the Age of Darkness.

But obviously, Jaghatai will be ghostriding the whip when he arrives

So, long time no posting. Did some Terminators, or rather, re-did the ones I'd made for my fists... 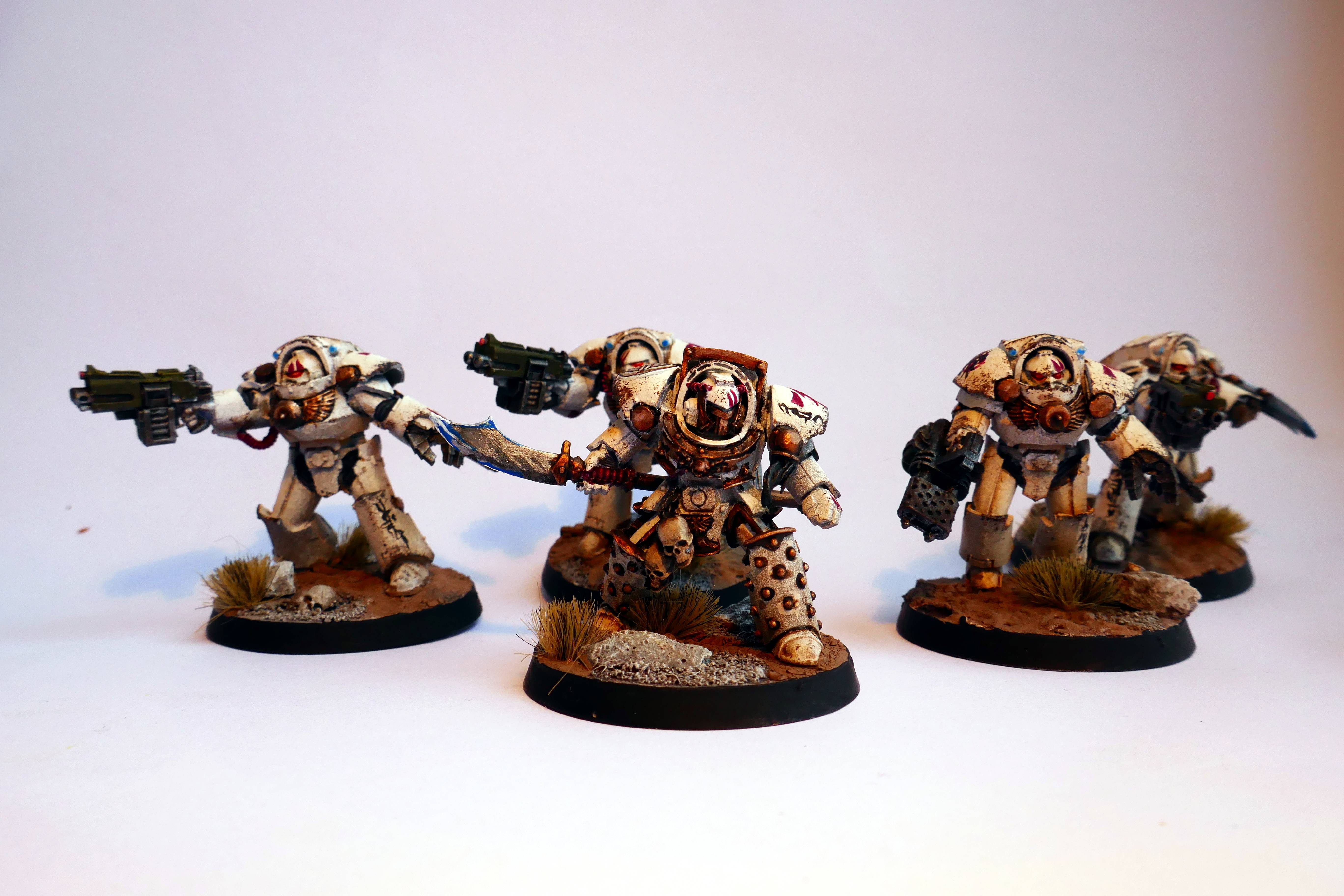 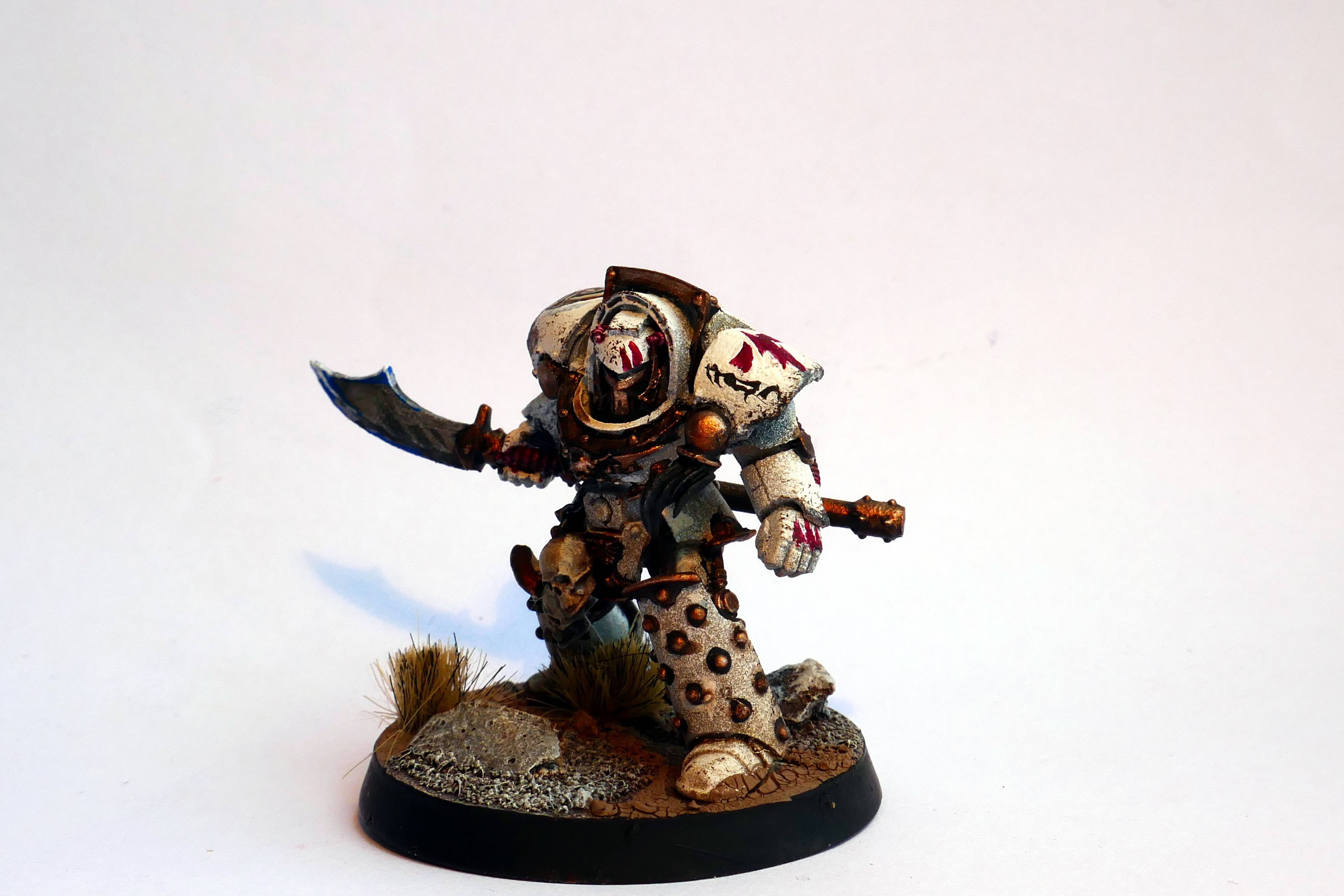 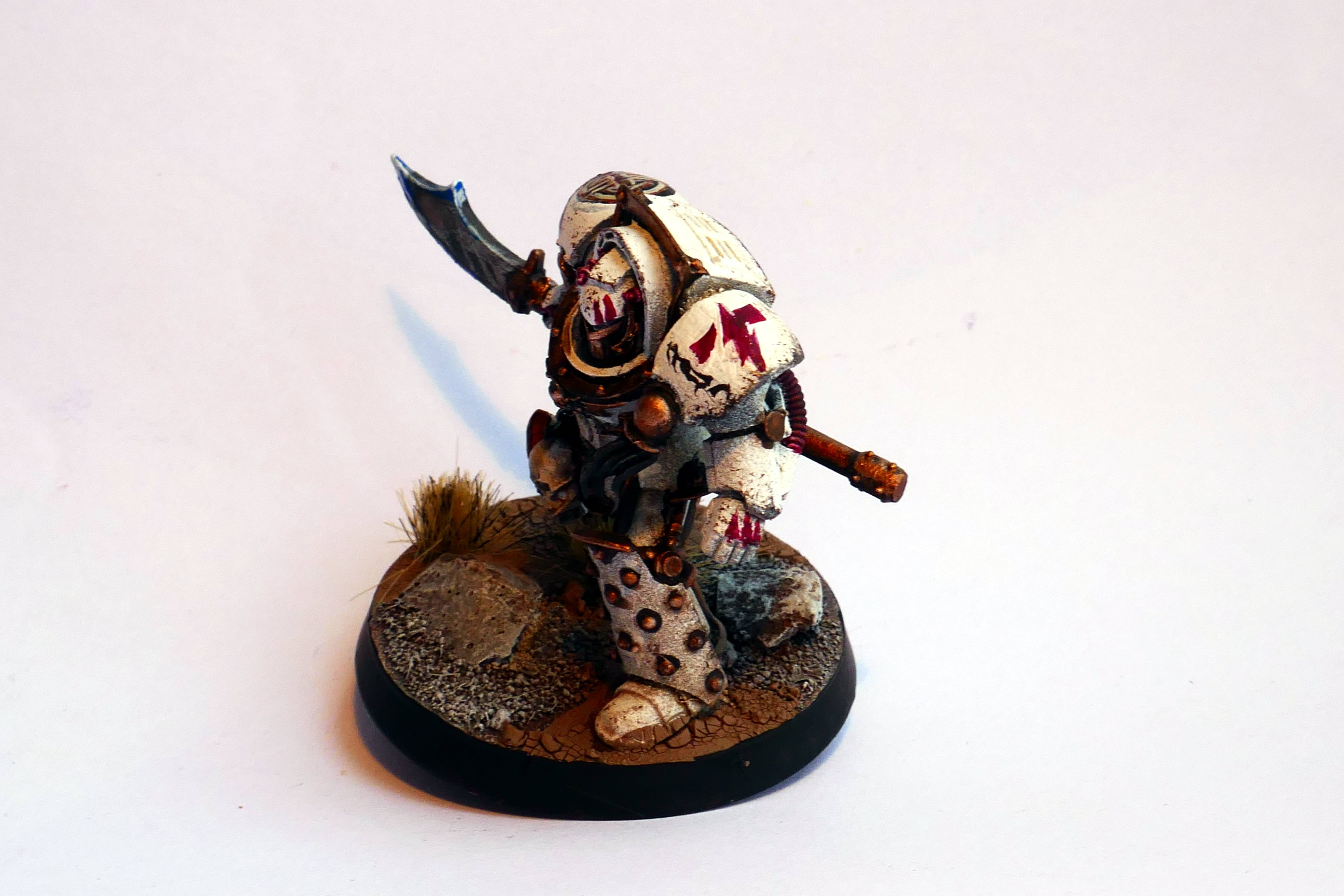 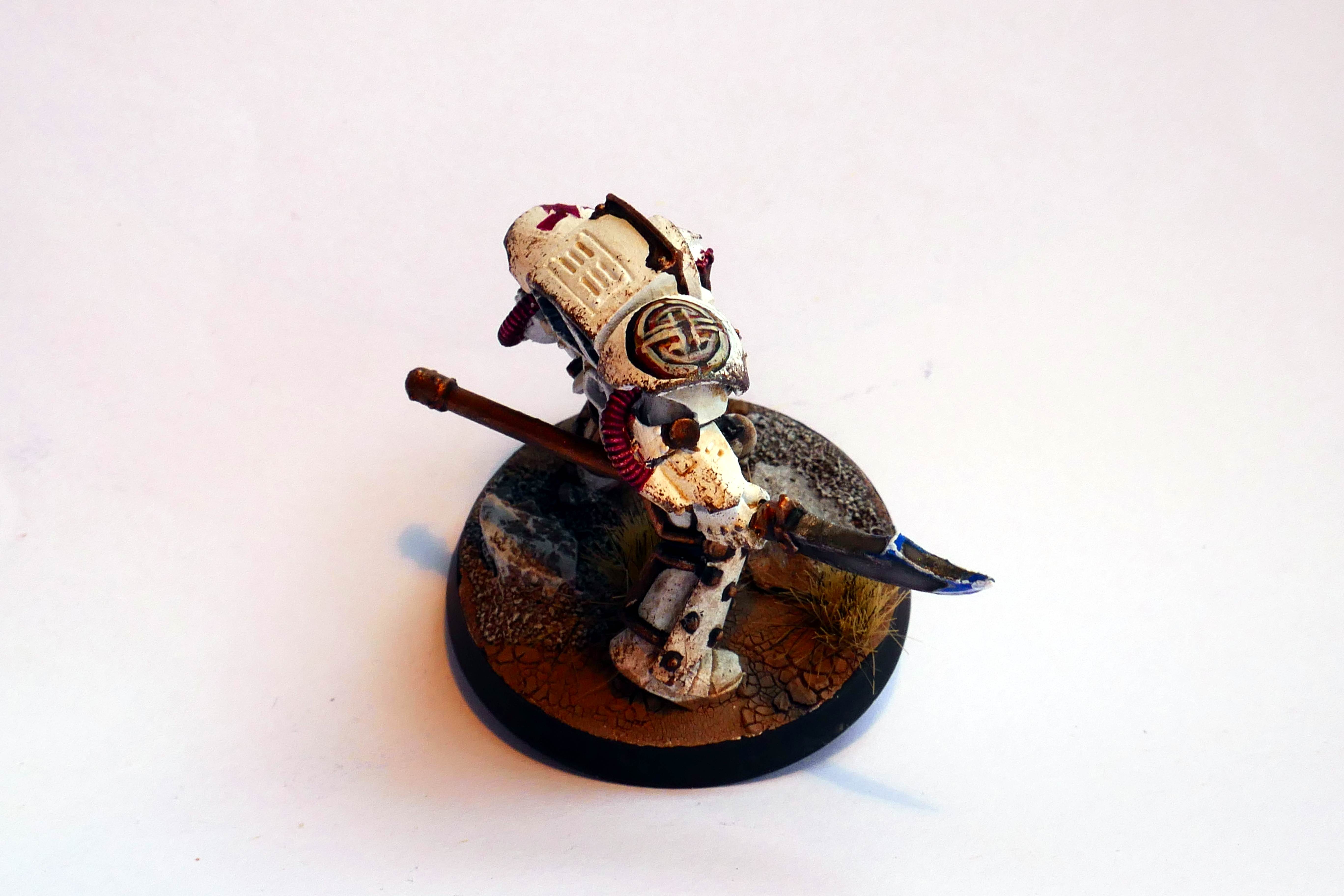 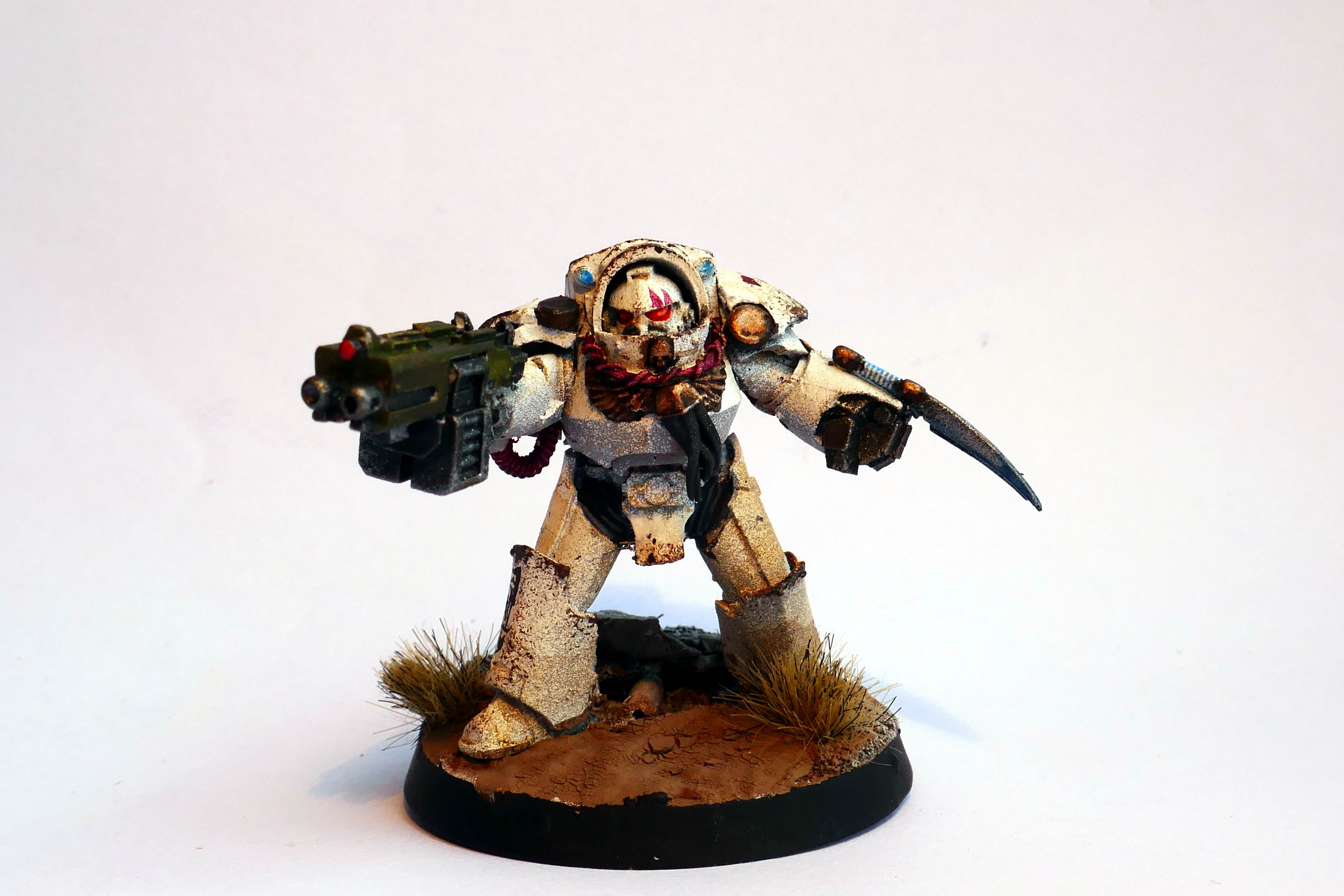 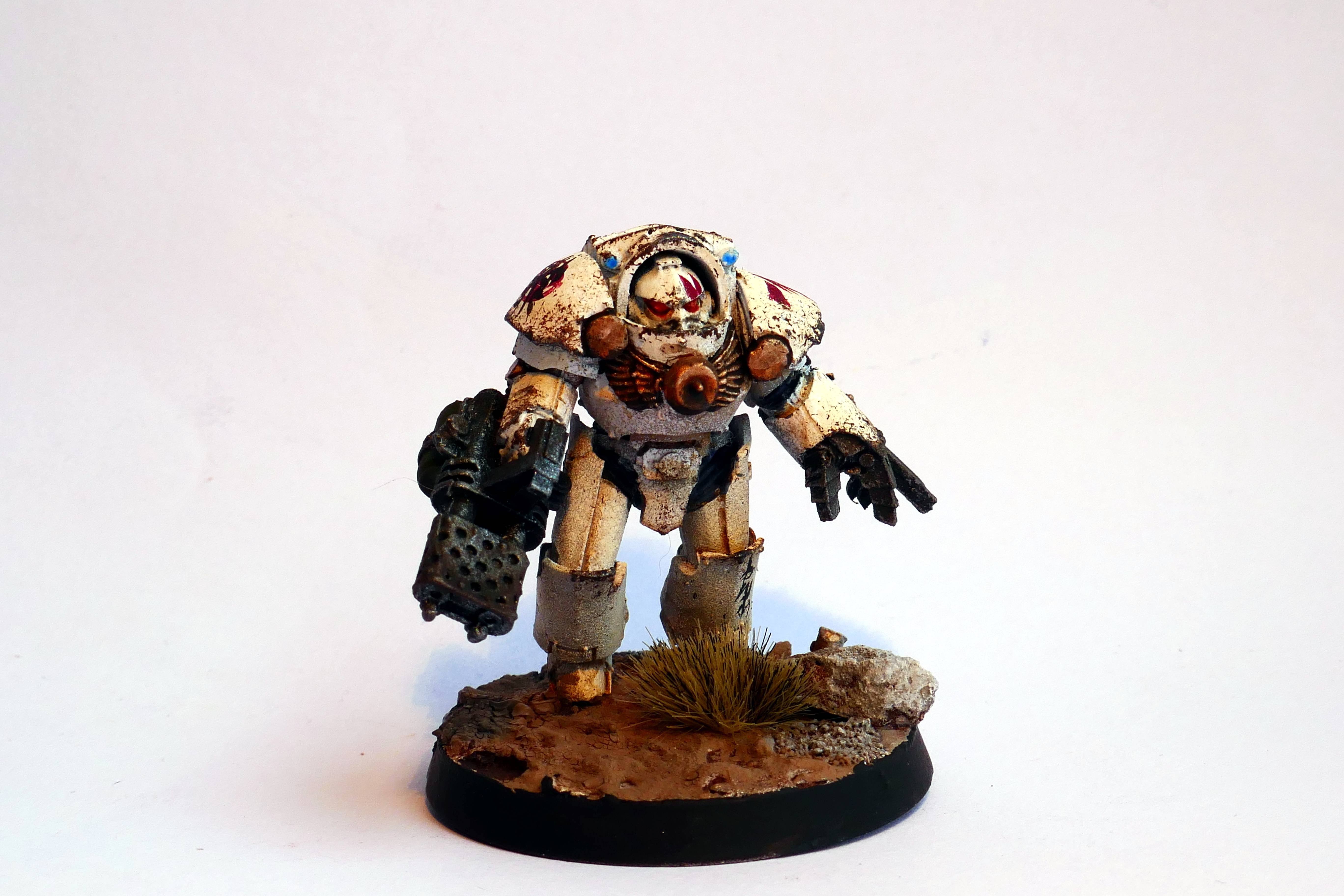 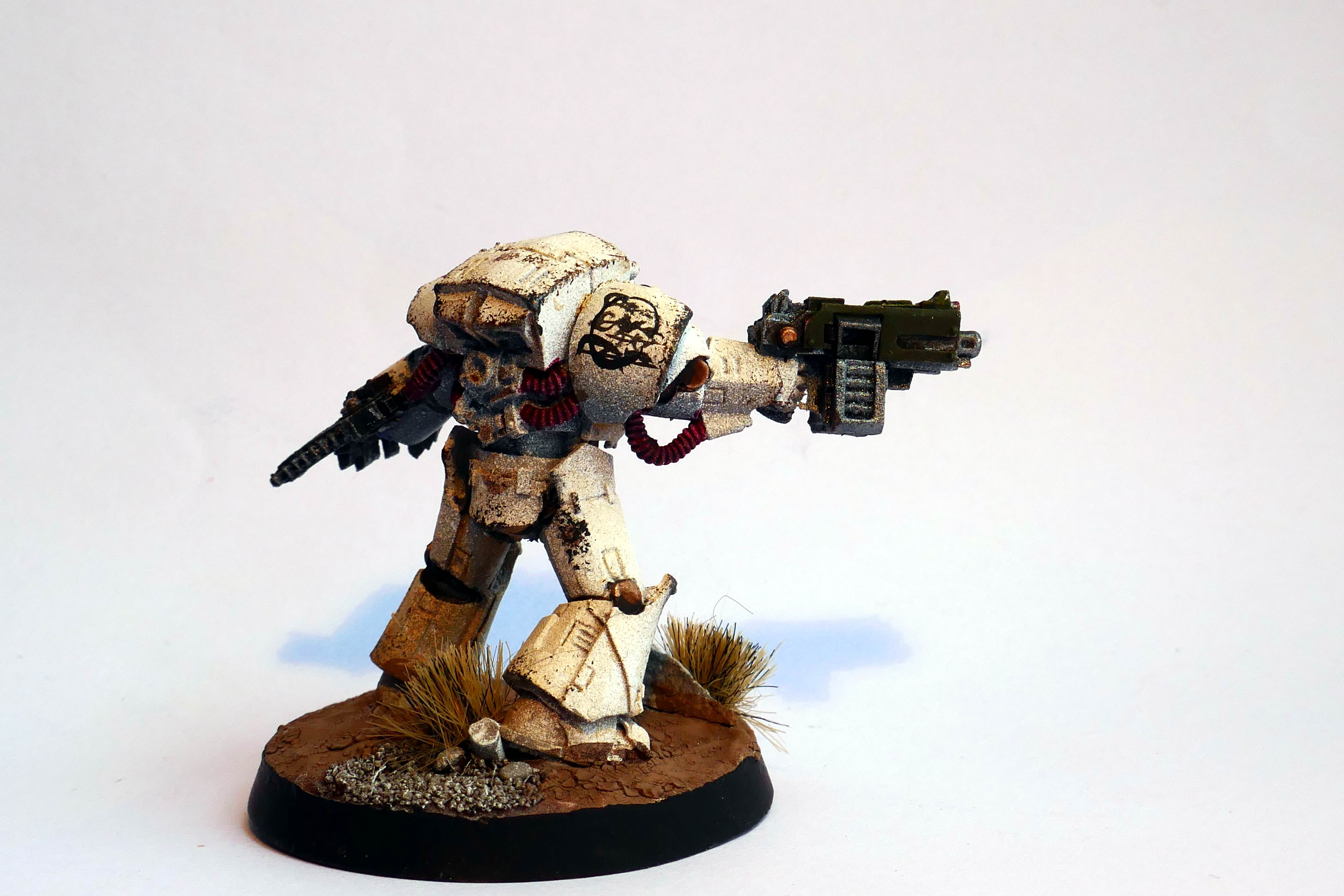 Niiiice, mate, very nice.  Always a massive fan of the White Scars, (so under represented). Great colours and I do love the added script and symbols.  But in particular, that guandao on the sergeant is perfect.  It feels like it could easily represent the Keshig.

Cheers, the plan is to do another 9 with more Keshig-y stylings, these were done fast and furiously for an event in Sweden where I needed something for Zone Mortalis...

Man, you gonna get us some pics of the event stuff, mate? -laughs- Either way, I really do love the Keshig look.  with the Guandao and tulwar (Charnabal saber) look, White scars really do just look excellent and I think you did nail it.  Can't wait to see more Keshig tartaros in the future!  They really are ace (and a fun counterpoint to those wicked bikes and jav squadrons!)

Those markings look great and really give the tribal feel to the Scars. The green combi-bolter casings work well with the red and muddied white too.

I figured they needed an extra muted colour, and the green casings seemed military enough

Man I love the Red Wake conversion, he looks right at home in White Scars heraldry

Check out my truescale marines!

Man I love the Red Wake conversion, he looks right at home in White Scars heraldry

There are more repurposings incoming

I love those terminators...nice work with the glaive and wrist blade

The Iapet shuddered and lurched as it rumbled through the burnt-out shell of Borus city. The venerable Land Raider had seen the Praefectus of the 27th. Millenial through the fiery destruction as Nelliex Prime had borne the full fury of the Emperors Children. By now Maephaeus Vegius found the escapades of his brethren ever duller. He cast a bored glance at the tactical Hololith, an immaculate eyebrow raised quizzically as a stream of datablurts materialized. With a thought, Maephaeus willed the comm-link into life. "Acheus, why are you not appraising me of this delightful development! The V. legion are making planetfall!". "my sincerest regrets, Lord, but we have only just received the signal ourselves. The celebrationist vanguard are reporting multiple contacts", the Signal master gestured to a newly flourishing Hololith. Deeper in the Sandared District, the cavorting mortal irregulars could be seen, the grainy pict-feed flashing stilted vid-logs as heavy bolter-fire tore through the ragged mob. "Advance, full speed, I desire to whet my blade", Maephaeus allowed not even the tiniest hint of emotion to register, decorum was important afterall, any trueborn noble of Chemos would attest to that. Even so, a slight, wholly unfamiliar chill, a sense of wrongness suddenly washed over the Praefectus. Gone in an instant, he relayed the deployment orders with a series of rapid blink-clicks, trusting to the peerless perfection of the sons of the Phoenician. 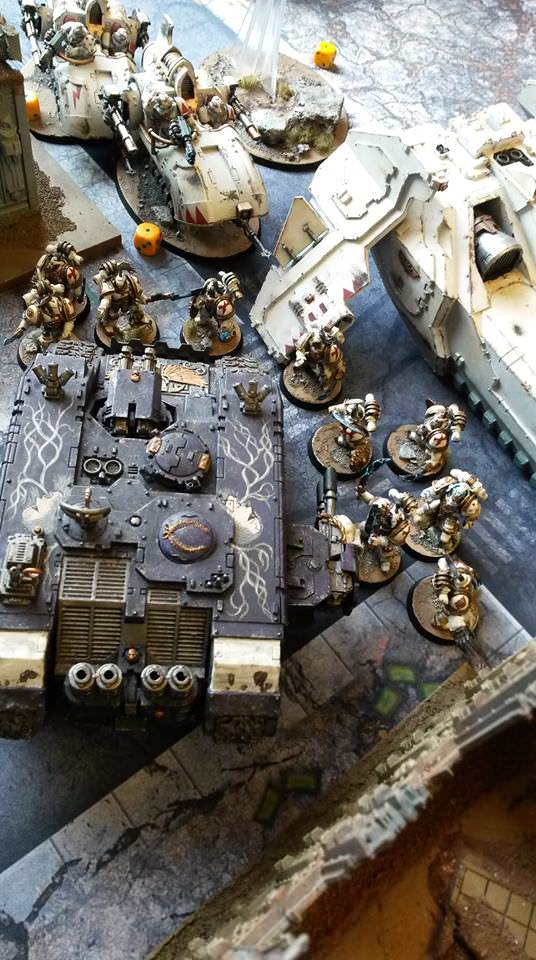 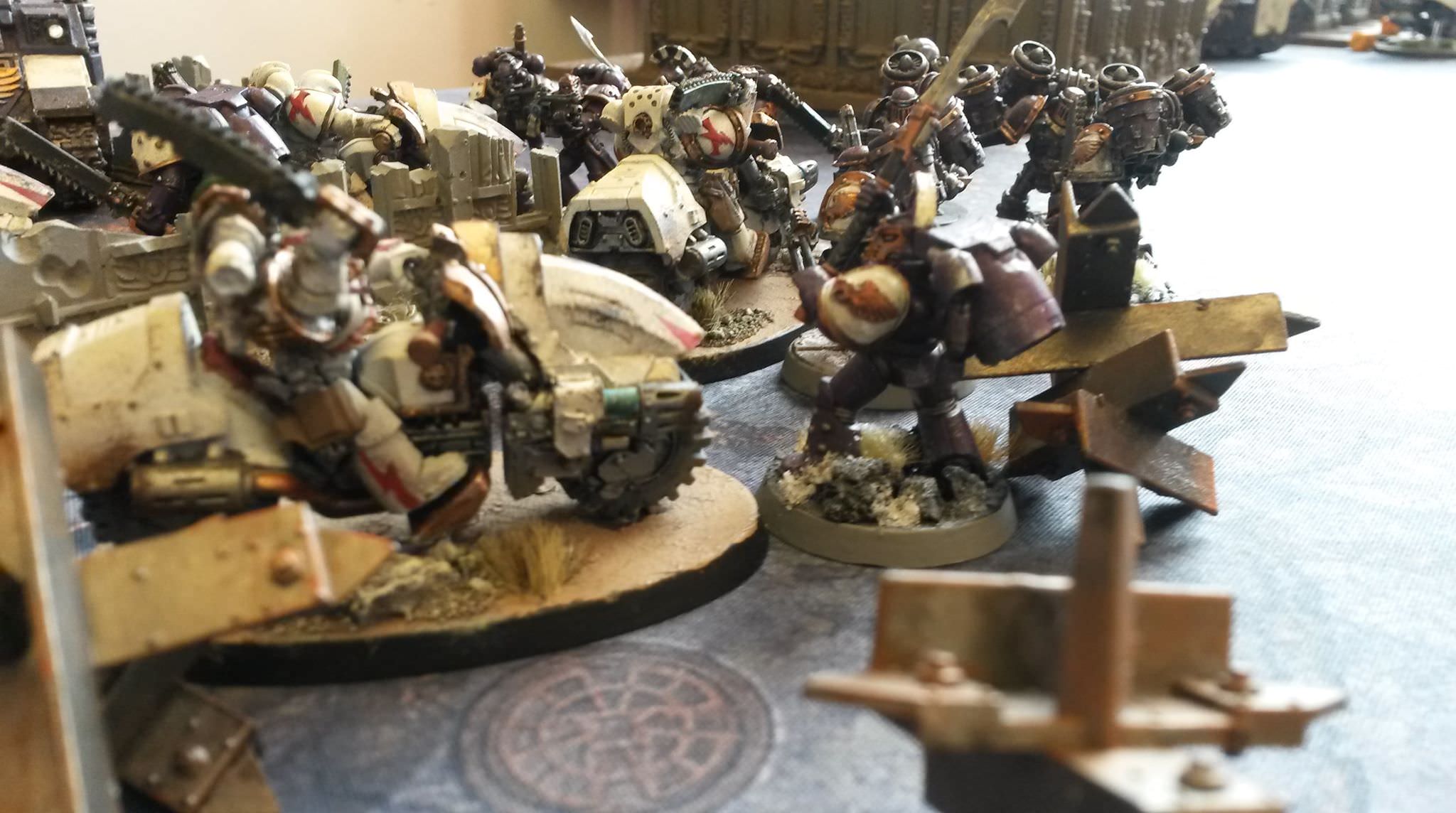 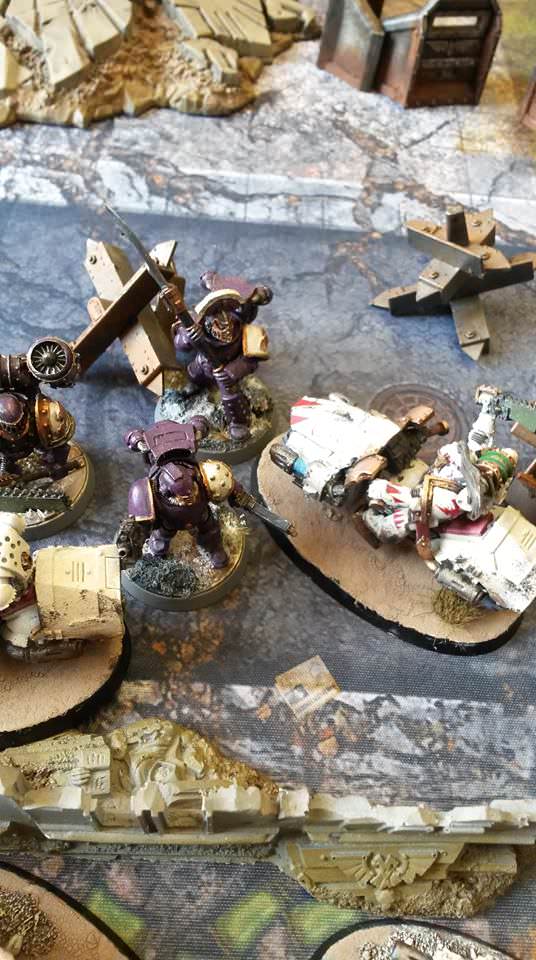 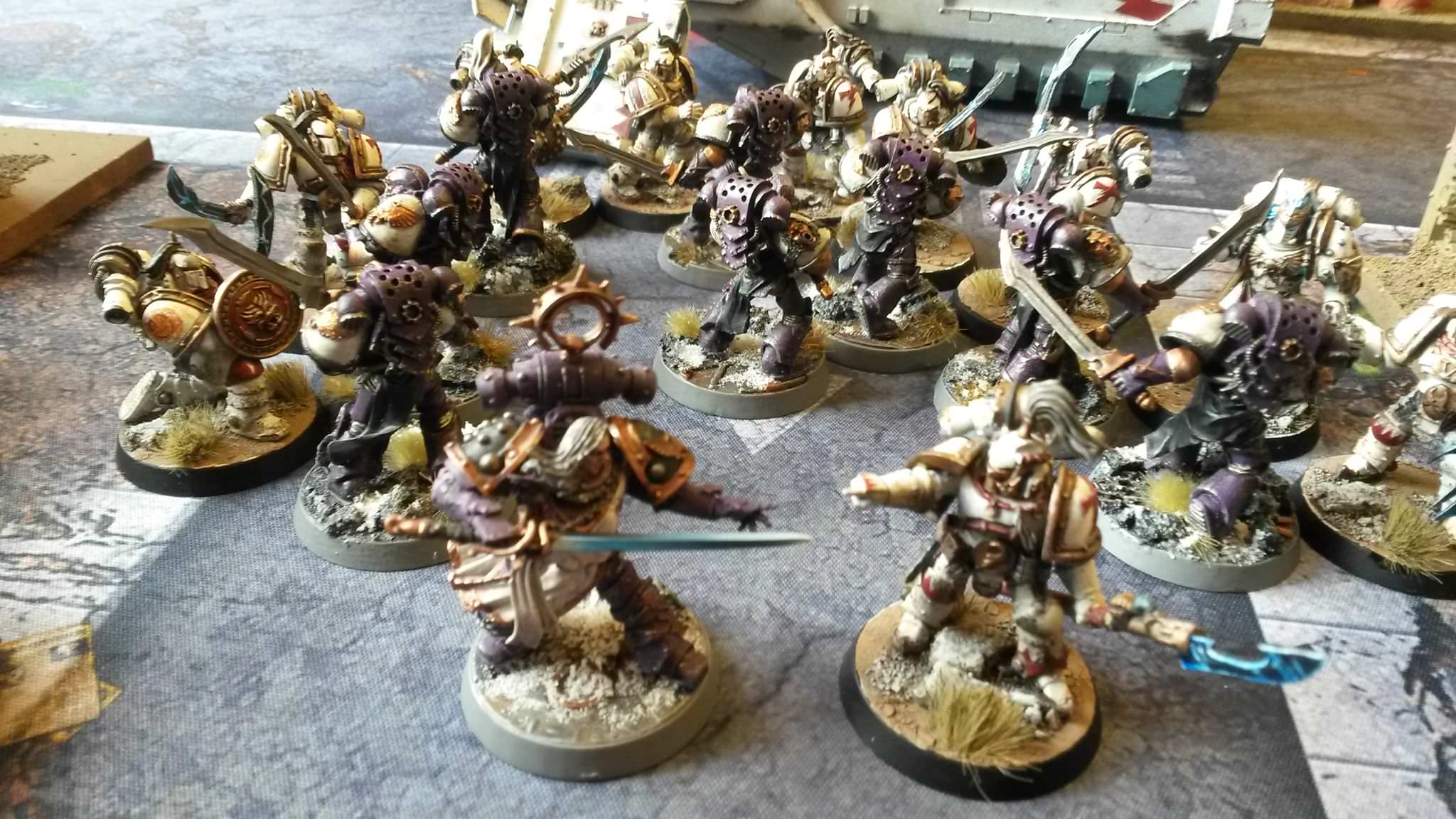 His otherwise immaculate features split in a rictus snarl, Maephaeus launched himself at the savage warrior in white before him. Chemosean longsword flashed with blinding speed, and was again blocked by the glaive-armed warrior. The White Scars had struck, with all the speed and fury they were known for, reaping a fearsome toll on the mortal followers sent to entice them to strike. Maephaeus had eagerly committed his Warriors to ensnare the Chogorian riders, but they had woven a web of their own. Thelocletian and the assault detachment had been swept away by the torrent of white-hot plasmafire unleashed by the V. Legion bikers that had somehow cut straight through the III. legion northwestern flank, and his own Palatine blades were embroiled in a fearsome melee, the Warriors of the Khan bolstered by the trickery of their Witch-seer, Maephaeus finally facing the source of his earlier sense of doom as he had led the charge on the White Scars, only to see his own Palatine Blades die one by one to the curved blades of the savages. His own blade leapt again, driving the White Scar before him, the storm of blows proving too much for the top-knotted warrior, a deep cut welling red from his midriff. "Can you not see that your are beaten! Bested?". The White Scar whirled away, panting hard. "I will not defeat you, no", the White Scar leader conceded. "But they will end you.". He inclined his helmet indicating something behind Maephaeus' back, and besides himself, the Praefectus turned to glance behind him. The realization struck with cold certainty, how he had lost himself so fully that he did not percieve the thrumming grav backwash as a trio of Javelin Speeders pulled abreat. His arms fell to his sides, and as the searing brightness of the Javelin Lascannons were unleashed, Maephaeus Vegius knew nothing more.

Khutugden clutched the deep wound in his flank as he gazed at the charred remains of the III. legion champion. Moghuchin, the Zadyin Arga of the Shattered Spear strode towards him, helmet unclasped and held in the crook of his left arm. "A dangerous hunt. He would have killed us all, had you not shared your visions with us". Moghuchin smiled. "I told you brother, the Heavens had foretold the path of this battle. I merely guided you to your rightful place. Now gather up your warriors, the Khan wills that we move fast!". They both turned, united in their stride towards the waiting Caestus.

I kid you not, that passage sounded almost like it came out of Scars or Path to Heaven, two of my favorite HH books. Awesome job, and awesome minis, as usual.

*woven a web, but I dig all the same

I kid you not, that passage sounded almost like it came out of Scars or Path to Heaven, two of my favorite HH books. Awesome job, and awesome minis, as usual.

Thank you very much, an honourable comparison!

*woven a web, but I dig all the same

Fixed it, it was very late when I wrote that

So who else are you converting? I feel like Sevatar or KhûÂrn could rock as V Legion praetors.

Well, for starters, I have two Autillon Skorrs looking at me, one will get something to ride on...

WS are probably the third sneakiest legion, after AL and RG

WS are probably the third sneakiest legion, after AL and RG

That is another factor in the "purposefully underappreciated" schtick that the Khagan goes for which I really like.

ãÎ.. models and prose both.

These are fantastic, the white armour looks great; weathered and battered as barbarian warplate should be!

Would you be kind enough to share the recipe?

I have somehow talked myself into starting a White Scars army and am doing my painting research*, your army hits the nail on the head!

very keen to see more of your conversion work, it's subtle but very effective

This is taken from a writeup I did a while back on the Heresy30K. It's deceptively simple, really.

Prime grey, spray white on from above down to about a 45-degree angle, maybe a little lower.

Lather on sepia and umber in an approximately 3:5 mix with some glaze medium, and rinse off excess with water and allow to dry.

paint it all black, Tinny Tin followed by aÿ£¢ bronze, final highlight is bronze and old Mithril Silver in 2:3. Then washed with Strong Tone.

Chaotic Red layered with a Crimson, theÿ£¢ name of which eludes me, then Strong Tone to take the most excessive red glarÿ£¢e

thanks for that Pheidias

Just found the Vallejo paints you mentioned, I'll certainly have a go with them!

Do you then remove excess wash pooling on larger armour areas?

do you sponge on weathering too?

really appreciate the run through of the scheme, I am trying to improve my skills all the time and experienced painters giving tips is a big help

I actually dab on the wash and rinse off excess with a waterlogged brush, like a poor persons pinwash.

And yes, the battle damage is sponged on: Dark brown, black and gunmetal.

I'm actually looking at trying my hands on Sons of Horus next...

Also tagged with one or more of these keywords: Horus Heresy, White Scars Legion