Hello, and welcome to the Feast of Blades competition, in which your ETL-vowed character models fight in an Arena of Death to the not quite death, in order to be crowned the kind of the arena, and champion of the forum. There can be only one.

What is the Feast of Blades
All those bearing the heritage of Sanguinius are allowed to compete for the honour of their chapter, and it would be great to see many canon successors and home grown chapters enter. In the event, Blood Angels players chose a champion that they have vowed and painted for the ETL (only completed vows will be allowed to fight), and these will fight against one another (I will be rolling the dice) in a knockout style tournament, until there is only one model remaining: The Victor.

The Feast of Blades Challenge is an idea pinched from Chaplain Lucifer on the DA subforum (with permission). The original thread can be found here, but I have modified them slightly for the BA. The idea is that we have a little friendly rivalry, support our champions, and gain glory. As I roll the dice, I will be narrating the fight, adding a little flavour to the proceedings. To help me out on this, your character needs a name and a story/title. Go nuts, this is your chance for your Champion to gain glory everlasting.

How can I participate in the Feast of Blades?
It's quite easy. The key thing is that your champion must have been vowed and painted as part of ETL 2016. A failed vow on the champion means that he will be disqualified from the FoB - painted models only! A champion may be any non-unique model with the 'Character' type, including sergeants, and excluding codex-named characters, of up to 160pts, chosen as normal from the codex. Register your interest in the thread by commenting, posting a photo of your model/link to the ETL vow your champion is in, with a list of the wargear they are taking:

Additional Character Rules
You may choose a single sergeant from any unit entry if you wish, but he will be at a disadvantage in the wound stake, this is compensated by the below:

Purchasing re-rolls:
Like in goo old Blood Bowl, Rerolls may be purchased by characters at a cost of 15points each. This is to even things out betwen characters. A captains experience gives him better WS, more attacks, etc, but a sergeants experience lets him predict the enemies movements, dodge their attacks, etc. Rerolls are used sequentially for each failed roll a character makes, so if you buy 2 rerolls, rapid fire a bolter in the first turn and miss both, then that is both rerolls gone.


When does it start?
The Feast of Blades event will start immediately after the conclusion of ETL 2016, so you have plenty of time to paint your champion, but not much time left to vow for ETL! Models vowed/completed for ETL 2016 before this post are valid, just add the link as normal.

The Fight
Contestants start 18" from each other.  To see who goes first a D6 and added the characters Initiative. The model going first will get to move, shoot and assault. The model being assaulted can overwatch at full BS.

However if assault fails the model that overwatched can't shoot on his shooting phase. Combats will be resolved just as a normal 40K combat until one model is left with 0 wounds.

How will I know the results?
A battle report after each battle will be written describing the battle.

Questions?
If there are any questions that I did not clarify enough or doubts you have I will add to the FAQ.
Additional Character Rules
You may choose a sergeant from any unit entry if you wish, but he will be at a disadvantage in the wound stake.

ENTERING:
If you have already made an ETL vow: You can either use a character from your current or a previous vow, or 2) complete that vow, then re-vow with your Feat of Blades character
If you have not made a vow in ETL 2016 yet: Then you have 1 week to vow make the most badass character for 160pts you can, before the ETL. You then have until around August 15th to paint them up.

The roaring of the chamber was deafening as the captain strode into the arena. Castigon's baleful bionically enhanced eye scanned the room, looking for a worthy adversary. Almost all of the Scions of Sanguinius were represented at the fest, even some brothers thought lost, and welcomed with pause. "Who accepts my challenge? Step forth and speak thy name!" He bellowed, his osmotic grill/vox caster amplifying his voice thunderously. The room quieted at his call, silent, bar the whirr of powered armour, and thudding footsteps approcaching..."I accept..."

*Although currently unvowed, Castigon will be part of my second ETL vow, and be the ringer in case of uneven numbers. By the end of ETL, I want cool photos of painted characters for the competition.

13: Chaplain Darr'knight of the Sanguine Vision (Charlo) No pict available

Love it! Once I've got something together we'll see what I can do!

I'm looking forward to what you come up with!

Obviously, some rules are being modified from the BRB, as has been detailed in the opening post. Hopefully, the intent is clear.

I will certainly enter my completed Company Captain.

I dub him: "Captain Gallan."

Good Stuff, Boudan, if you've vowed him for the ETL, drop a photo in this thread when he's done and I'll add him to the roster.

Do we post 'before' painted pics, or just completed pics?

Is there a limit to the number of how many reroll you can purchase?

Do we post 'before' painted pics, or just completed pics?
The before pic will be in the ETL vow thread, post the completed pic here so I can make some character portraits

Is there a limit to the number of how many reroll you can purchase?
Yes, in that they cost 15pts each, and you have 160pts to play with.

Can rerolls be used for things like saves?
Any failed roll, used in order. So if  you buy 3 rerolls, the miss with your bolt pistol, and miss 2 combat attacks, you have no rerolls left for your saves when your opponent attacks you.

Nope, it's not a FNP roll, it's a special save that can be taken in addition to others.

Hmmm. Gotta figure out how many rerolls a Powerfist Scout Sergeant will get for his trouble...

You might be able to add a storm bolter in there or something, or drop a reroll for a combi. The Lad Himself, Khol Grann

A Shotgun and powerfist is an awesome combo!

Holy crap aha that is amazing.

You've made the BA equivalent of Iron Hand Straken!

You know, that wasn't intentional. I started with the powerfist, because that's awesome, and then gave him the shotgun because he doesn't need the pistol the rest of the squad has, and there he was.

I really like the purple on this guy. Makes him stand apart from all the others. Great work.

As my ETL vow states please submit this to the arena;

1 mastery level 2 librarian in TDA with a force axe and a storm shield and 2 rerolls. Comes to 155 points.

Awesome stuff so far, guys, that's 4 contestants not including myself, meaning this will definitely take place!

Mightykin, Librarian, excellent, all he needs now is a name so the crowd know who to cheer for!

I'll enter one of my Termie Sgts:

Battle Brother Dantorial has served with the Blood Angels for over 2 centuries, with over 50 years as part of the 1st Company. An ambitious and cunning warrior, who is all too modest in his abilities attributing many of his personal victories to luck.

His uncanny luck raised the suspicions of the Librarius, but despite various tests could detect no latent psychic abilities. Even the Reclusiam has considered that he may some how be marked by the Emperor for deeds significant to the Blood Angels in the dark days ahead. No matter the reasons Dantorial has thrown his lot into the Feast of Blades, hoping to catch Commander Dante's eye... 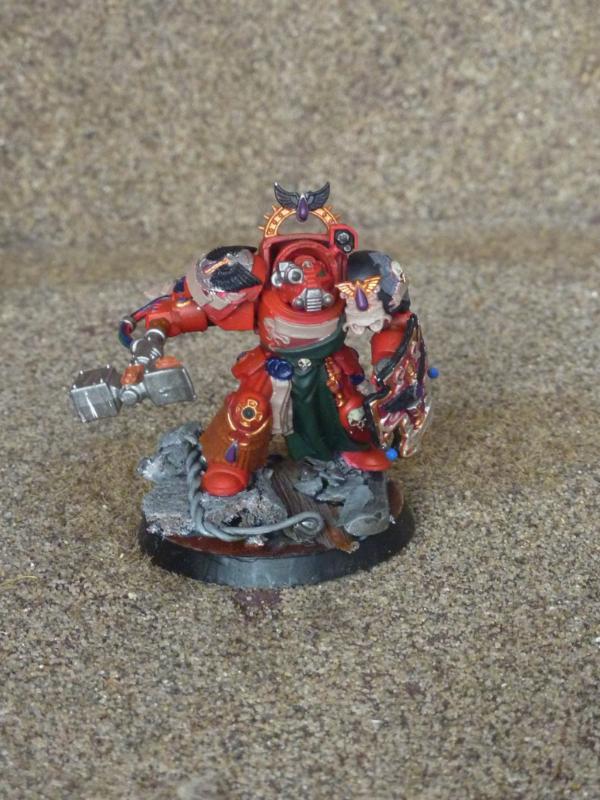 Awesome, EDC - I think you have a potentially very strong entry there!