The Ashen Crows | Fall of the 11th legion

The rise and fall of

Hey guys, Here's the start of my missing legion project.

This is my 4th attempt to create a missing legion, but I hope by creating this blog i will be encourage to follow of through with it till the end.

The Lore is currently in the works but basically they have a large amount of apothecaries and do a lot of studing of xenos races.

Their primarch is a giant apothecary pretty much. Though due to his upbringing on his home world he is physically the weakness of the primarchs though makes up for it in his vast knowledge of biology and other scientific fields.

The primarch landed on a planet which had been devastated by a virus, reducing most living things to ash.

The primarch being a primarch was immune to the viruses effects and was found by a recon team. Seeing the child primarch they captured him and took him back to the capitol: a huge network of bio-domes that protects them from the virus.

It was the decided that the primarch would be tested on in order to find a cure.

All these test devastated the primarch physically and mentally to the point where he developed a spilt personality, one half compassionate, kind, charismatic. the other cold, calculating and savage.

his darker side takes over, which through force breaks out and goes to hunt down the scientists. he ends up in a forest, overwhelmed with the beauty and complexity of other life his normal side takes over.

eventually found by the head scientist, the primarch finds out he was tested on so that they could find a cure, "to bring this world back from the ashes, you are the ember that will ignite a new age". but also finds that the scientist test him had suffered mentally, traumatised by what they had done to a living being.

This pretty much gives the primarch his moral compass, he feels that sacrifices have to be made in order to progress. but feels that humans shouldn't have to suffer in wars.

The primarch is trained under the scientists and quickly surpasses them in all fields of science, especially biology. using his knowledge he starts to terraform the planet, then papa emps arrives.

The primarch came into the legion with saddness, finding out the suffering affecting the galexy and how men are having to give away their lives in order to fight.

He praised all of his new found sons, and promised that one day no one will have to suffer in the acts of war ever again.

the first recruits taken from the home planet was criminals, the primarch deeming them the only ones worthless enough to loose nothing from joining the legion.

As time went on, the primarch grew to hate the solar axilla and imperial milta and would force them to retreat or he would not fight. seeing it as a waste of life.

often before and during battles his personalities would argue, each one having different ways to achieve the same goal. depending on who won out wars could be focused on protecting the world, or bringing it to the torch. "by killing thousands we could save billions".

The primarch decided to improve the space marine recruitment process and started to grow test tube humans, whos genetics would allow them to be more susceptible to the gene seed in-plant. The humans born were raised in the ships and fortress of the legion learning the lesson of the primarch and the imperial truth.

I'm still working on all the details but this is just a basic outline.

When creating my colour scheme I wanted to do something different from the other legions but without it looking out of place.

I decided to have simple colours but made interesting with free hand.

The embers are relatively easy to do but really makes the model stand out.

What do you think?

I think that these are awesome! The fluff's pretty cool, and the whole concept of a primarch that genuinely dislikes war and battle is an interesting paradox... something bred for war has - through its surroundings and influencing environment - come to think of war and fighting as a waste of time, life and resources. Pretty cool, if you ask me

Also, that paint scheme is REALLY nice  - the shoulder pad's icon is great + the colour is pretty shmexy. Gotta ask, though; how did on earth did you do those embers?! They look fantastic!

Anywho, keep up the awesome work! Are we gonna get the primarch? 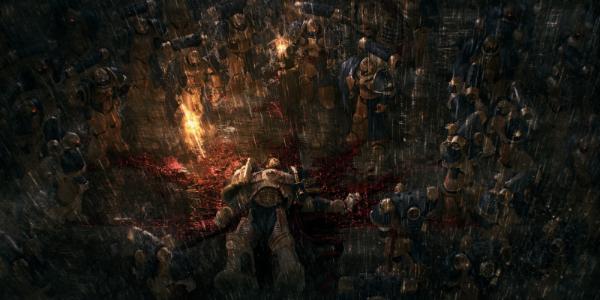 I've seen a lot of your stuff and the rest of brotherhood of the lost, so i've seen a lot of art and ideas to inspire my own.
My primarch will meet a very similar fate. He thought he was doing what was right for humanity but just went to far.

Here my Sergeant for my First terminator squad. I wanted him to be covered in embers and by add something extra to him to make him stand out.

The chest piece is a necron wraith head glued onto or 40k terminator body.

Here's another member of my terminator squad.
Decided that a normal plasma blaster was a bit boring so using a heavy flamer and a plasma gun I created this conversion.
I picture it as a plasma gun with a huge cooling system meaning it can fire quicker for longer.

2 more terminators finished.
Only 1 left to do then onto basing, planning on doing a cross between lava and snow. it will stand out from the model but also reflect the colour scheme.

Only for certain characters, and only subtly.

The last terminator painted up and based.
I wanted to try something different for my bases so I've decided to do a snow / Industrial theme. So lots of rust, chemical spills and well snow.

Terminator Squad
Painted and based

Finally got the whole squad based. I've decided to go with a snow/ rusty industrial look.

So lots of chem spills, rusted metal and snow.

Here's the test mini for one of my missing legion, The ashen crows unit. The Ablaze. Mutants created by the 11th primarch to replace the adeptus astartes.

Cool kitbash, are you going to use the same colour scheme as with the terminators or are you going to try something different? I think that turning the orange you sometimes used into your primary colour could look good and fit the legion theme, specially if this are some kind of mutants.

By the way you two, have you ever thought of bringing your both legions into one universe?

So you fill the roles of 2nd and 11th and tell togheter a story. Would be a cool thing to read.

The Ablaze
The 2nd embers of mankind

Went for a coal colour for this guy and added a lot brighter embers all over the side.
It took a while but I think it looks great.

Thanks, he took a while haha.

Here's my Sergeant for my 2nd missing legion unit the Akian Guardians.

They specialise in holding of objectives, ship boarding and protecting civilians.

Wow, really cool kitbash, love the shield! Latelly I've seen so many awesome conversions with sanguinary guard bits that I may have to buy some myself... I'm eager to see how the next ones work out!

One of the more detailed models i've painted in a while, was a quite a pain but I think it came out great.

"if a man gathers ten thousand suns in his hands...if a man seeds a hunderd thousand worlds with his sons and daughters, granting them custody of the galaxy itself.. if aman guides a million vessels bteween the infinite stars with a mere thought...Then i pray you tell me, if you are able, how such a man is anything less than a god."-Lorgar Aurelian, Primarch of the word bearers

Sooo cool now that he's painted though I think more highlights on the shield would look great, as it is now it seems quite plain, but it could be the photo. The grey and orange scheme looks definitely good, and is also different from the other legions.