Was always going to be popular. These two books are far and away the best sisters fiction out there.

Sisters limited ed books have been a surprise drop just there now.


Looks to be sold out in UK already?

It sold out in less than 5 minutes!

It sold out in less than 5 minutes!

I must keep a closer eye on the Sunday previews, I only managed to get that by chance. Looks a nice version. I will enjoy a return to sanctuary 101

I'm echoing myself a bit, but judging by how quickly the Sisters limited edition sold out I really do wonder now if 95% of people buying the limited editions these days really are just scalpers/bots (same thing). It seems like after how lucrative Siege of Terra was for them, every single limited edition, no matter how unhyped or irrelevant to most peoples interests is, goes after a couple of minutes.

The longest lasting one most recently seems to have been Luthor which lasted about ten-fifteen minutes, but that's still lightning fast compared to things like Black Legion, Sons of Silence, The Warmaster (especially), Neferata, Khan, Corax, etc which you could get for over half a year - I think The Warmaster lasted over a year didn't it? Gaunt's Ghosts isn't exactly some niche series, especially in the GW fandom. If it released today it would be gone before the clock struck 10am. The Lion and Alpharus LEs seem to be the most indicative of this, judging by how they followed the new trend of selling out in minutes, unlike the previous books released pre-Siege of Terra.

Low and behold, there's already plenty of this Sisters Collection up on Ebay. 14 results for the UK alone already, at least two already having sold for £140 (as opposed to £60 RPP). A load of international results as well. I wish fools weren't so easily parted of their money by these scalpers.

I would be cautious of the scalpers. I’ve bought twice from them, once the Horus Rising Limited to match the siege books. BL gave me no choice in this as it was only sold in Nottingham and a plane ticket, taking time off work, paying someone to do my work, a taxi from the airport and probably a hotel and food made the scalper look cheap. The second was Rachael Harrison’s mark of faith, sold by someone laughably called ‘youwillreceivethebook’ and guess what? I didn’t receive the book! Initially after buying it he immediately readvertised at a high tee price than I bought it. Then he claimed he didn’t get the book at release time, just like me, but the brazen little so and so had advertised it even before he had it. When I gave him a one star review he complained that his supplier had let him down....... yes that’s right, his supplier, Black Library themselves had obviously let the odious scalper down by not reserving him a copy.

People paying scalpers prices are destroying the hobby for others. Paying triple the price to someone who doesn't even have the book yet is laughable.

I gave up on BL LEs, too many scalpers, quality is constantly going down and the prices up. Two years ago, BL LEs stayed up for weeks. It's just a hype created by scalpers since Solar War. There are way better publishers out there to go to if you want fancy editions.

Was always going to be popular. These two books are far and away the best sisters fiction out there.

It's been a while since I read Faith and Fire, but Mark of Faith blows it out of the water

My two cents is that I always try for the LEs I want but if I do not get it, that is the end of the story. I refuse to buy from scalpers.

I tend to like the LEs enough that I value them individually, I care little and less if I do not get all of a series.

Just noticed A Dynasty of Monsters the AoS novel is coming out this Saturday; one sentence info in the Sunday Preview article. I have no idea why they didn't announce it during the BL preview, they didn't even bother updating the Coming Soon section including this title. They are just going to drop the novel with barely any announcement and then they are going to act all surprised AoS books aren't selling well. Shame on you, GW/BL.

But remember (all of us, not you in specific theSpirea) that this is a 40k related forum. So please avoid an AoS related discussion here.

And we already had BLs marketing strategies or the lack thereof talks in the past.

And we already had BLs marketing strategies or the lack thereof talks in the past.

I sometimes wonder whether the folks at GW live and breathe the 40k universe a bit too much, soaking up all those weird idiosyncrasies and inefficiencies!

Not sure if @cheywood next post was in part response to this post by me but just to clarify...

It was a (probably crap) joke commenting on the BL marketing strategies being as sensible as the way the Administratum operate. Not a comment on their focus on 40k product.

Personally I couldn’t care less about AoS books as never read them as not my thing. So quite happy for the BL focus to be heavily 30k 40k WH Crime and WH Horror.

Last I knew BL doesn’t force its freelancers into projects. 40k is both more lucrative in terms of sales (just look at goodreads numbers) and something many of the authors have enjoyed since they were kids. It’s the more popular setting among the authors and will be for the foreseeable future regardless of marketing. There’s not much to dissect about the situation.

Edit: that’s not to say GW is holding up their end of the deal in terms of promotion, they aren’t, but I don’t think more publicity will change BL’s focus on 40k.

Just noticed A Dynasty of Monsters the AoS novel is coming out this Saturday; one sentence info in the Sunday Preview article. I have no idea why they didn't announce it during the BL preview, they didn't even bother updating the Coming Soon section including this title. They are just going to drop the novel with barely any announcement and then they are going to act all surprised AoS books aren't selling well. Shame on you, GW/BL.

It's the WHFB strategy. Heck, when they had weekly WD issues, they barely even managed to mention that a new Gotrek & Felix novel was coming out. G&F of all things!

They'll announce limited edition #321 weeks, or even months in advance, but can't even be bothered to give a stage to lesser-selling material... it's like they haven't really understood how their own marketing department is supposed to work. Terra to BL: You need to push your underperforming products harder to raise them up, not less and be surprised about further downtrends.

That's actually part of my problem with the lack of Warhammer Horror at Warhammer Fest. Not even a simple acknowledgement of its existence, after a one-novel (and very late anthology) second year.... that doesn't bode well, it fits too neatly into BL trends.

Interview with Guy Haley about Godblight and the changes to Dark Imperium books 1 and 2: https://www.warhamme...pill-the-beans/

The release date is ‘soon’ for all three, but there’s a look at the cover of Godblight and some good information on the revisions made to the first two books.

It's a nice cover: 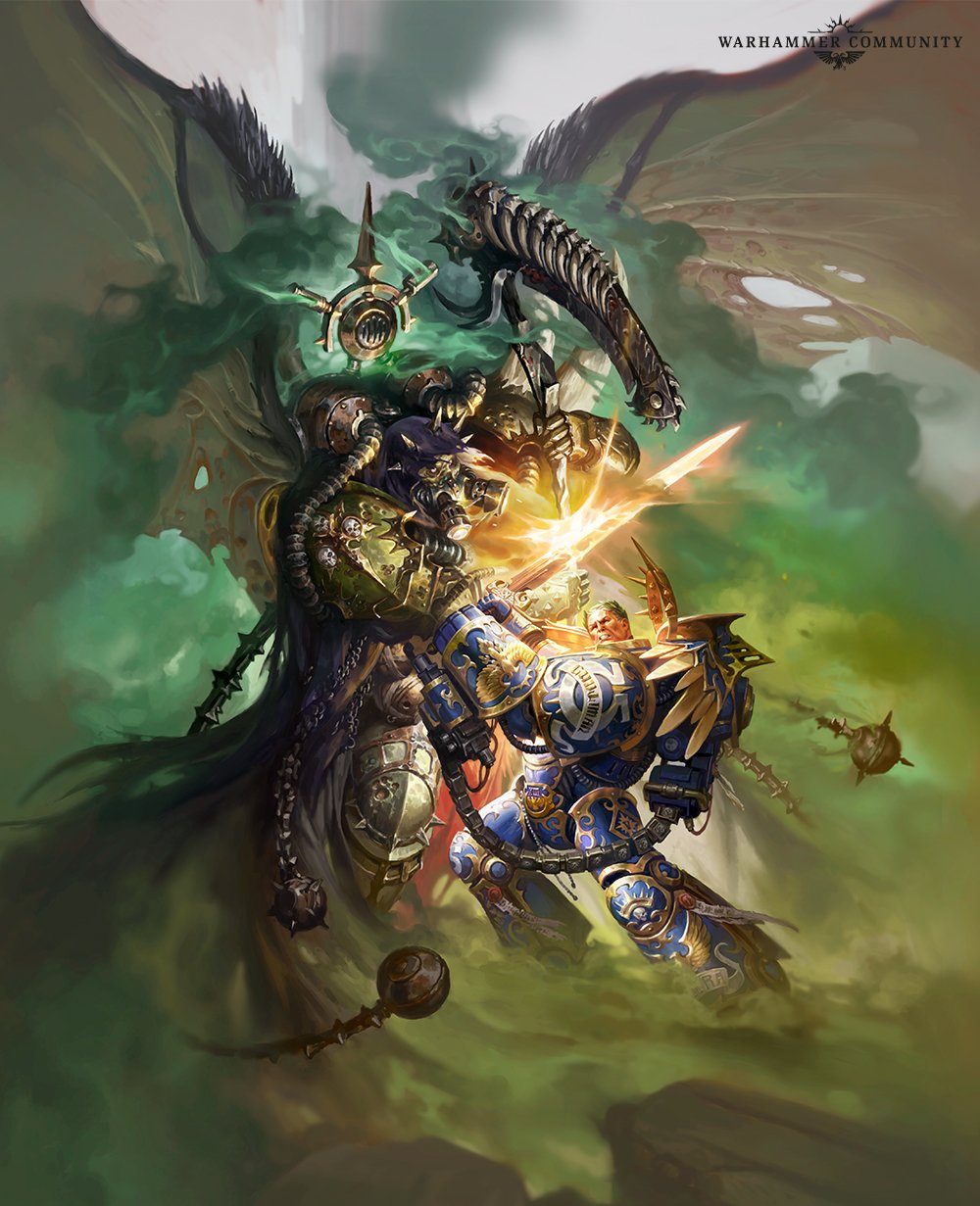 "However, I do recommend the new editions. The result is that you’ll be able to read Dawn of Fire, then this trilogy, and get one humdinger of a story that neatly segues into… Well, that would be telling, wouldn’t it?"

I for one cannot wait to read the "Morning Commute of Fire" series.

“Godblight isn’t just about primarch versus primarch action, as we continue to explore the effect that the Emperor himself may or may not be having on the galaxy, and chronicle the beginning of the war between the dark gods…”

Is that something of a future lore reveal (my bold btw)?

I will be buying this trilogy, if for nothing else they will be the capstone to the Dawn of Fire series BUT also because the new covers are sweet!

Saying that I was not overly impressed by Dark Imperium (and as such did not buy Plague War). In places it read more like a Codex lore entry. Very tell don’t show. I think Haley has got better since then as thoroughly enjoyed The Avenging Son etc.

It may just be a reference to  the growing crop of super-gifted like Kaylia from Plague War, whose origins Guilliman is still hesitant to ascribe to the Emperor.

(Sees Warhawk, inevitably jumps up and down and squeals)