217 replies to this topic

Woe would have befallen the Xeno if I had been!

So I have played a couple of more games of eight edition with my primaris list, adding the high marshal Hellbreach trying out different combinations of supporting characters.

Highlights from my last games against my friend Peters Space orks:

Beautiful champ, and what a kick-ass way to bring down the warboss!

Sigh.  Awfully inconsiderate of you, making Primaris look cool like that.  It's much easier disregarding them as goofy and awkward first generation models

How much work went into those arms?  I don't recall seeing a stock Primaris with that pose as yet.

Excellent work on the Emperor's Champion.

On that note, how do you find the ancient? I think it's a very fluffy take, as well as strong... but couldn't he be shot off the board very quickly if you don't positions him out of LoS? :/

The tale of saint Lazarus tells us that during the great crusade when the emperors legions came upon the swampy agri world of Vigala a petty king named Lazarus afflicted with the tallow plague that had haunted the sector for millennia surrendered the world to the great crusade. Thu weak and dying Lazarus showed the emperor to a dormant Archeotech horde that had been jealously guarded secret by his own dynasty for thousands of year. When the darkness of ignorance was illuminated by the divine light of his majesty the ancient mystery turned out to be a centre of healing from the dark age of technology. With this powerful centre at his hand the emperor cured poor Lazarus and left him as director of institute that would in a century end the plague that had killed untold billions.

Lazarus was canonized by the early Ecclesiarchy becoming the first cardinal of the world that now bears his name, his sainthood steaming from his singleminded dedication to what would be in time known as “The hospice of the radiant Emperor”.

The hospice have attracted hundreds of billions thru the ages, sick a weary pilgrims hoping for a miracle. With the arrival of the space orks the pilgrims took up arms to defend their sacred cities against the xenos menace.

Sofar my EC has killed my friend warboss every game, this last game he slayed the warboss then he was caught in the explosion of a Morkanuat. Dying as a true hero of the crusade.

Very little actually, the left arms is from one of the sergeants and the right one is an unmodified bolter arm.

Thank you I’m very proud of him.

Thank you, I get really inspired by all the fantastic miniatures I see on this board which drives me on.

I’m very happy with the ancient so far, after trying him for a couple of games just for fun he has found a permanent place in my infantry centred list as his ability have been very useful during critical moments.

Finished my Castell and ad a squad of intercessors, had a game a couple of days ago that cemented the theme of my army as the massed fire of hellblasters and intercessors was very effective. I think that with the new points costs in the codex I will be able to make a infantry based army work, the idea being that it’s a force of drop pod troops that have descended before the start of the battle.

Looks great, love the rough look on the sword of that Castellen.

Any secret to how you make it look that way?

Stand by for orbital assault.... (a big uppdate is incoming) Really liking the tilt shields, a very thematic way to add some new colours and individuality to the force.

Nice banner, brother! Especially the main part! May I ask how you made it?

The Gray Knight helm works perfectly on a Primaris. Looking forward to more.

@Pearson73: It’s a call back to My old Bretonnia army and I think they add a bit och colour but stays within the theme.

@LordVelype: I think the banner is from the regular space marine command squad.

@Markus_ thank you, I have quite a lot more painted I just need to take some pictures. There are some cool things coming up. No enemy shall be beyond my wrath. As my crusade is supposed to be a drop pod army that just set foot planetside I don't have any tanks, instead I must rely on dreadnoughts for heavier firepower and close combat mobility. In my gaming club forgworld units usually are a no-no I will mostly use this piece of impressive war machine as a redemptor dreadnought.

He looks brilliant. I just love all the iconography.

"All those rumors about us being intolerant and stubborn really just evolved from our history. We're actually just a fun bunch of guys who enjoy burning witches" - Anon

@Honda Thank you, I'm a big fan of transfers and this beast was so fun to put together I will proabably get two more!

@Vairocanum On my next I'm going to keep to the religious icon theme and try to be more ambitious. I dont like the look of the Aux grenade launcher and decided to make my own and I'm quite happy with how it turned out. Would love to get some feedback. 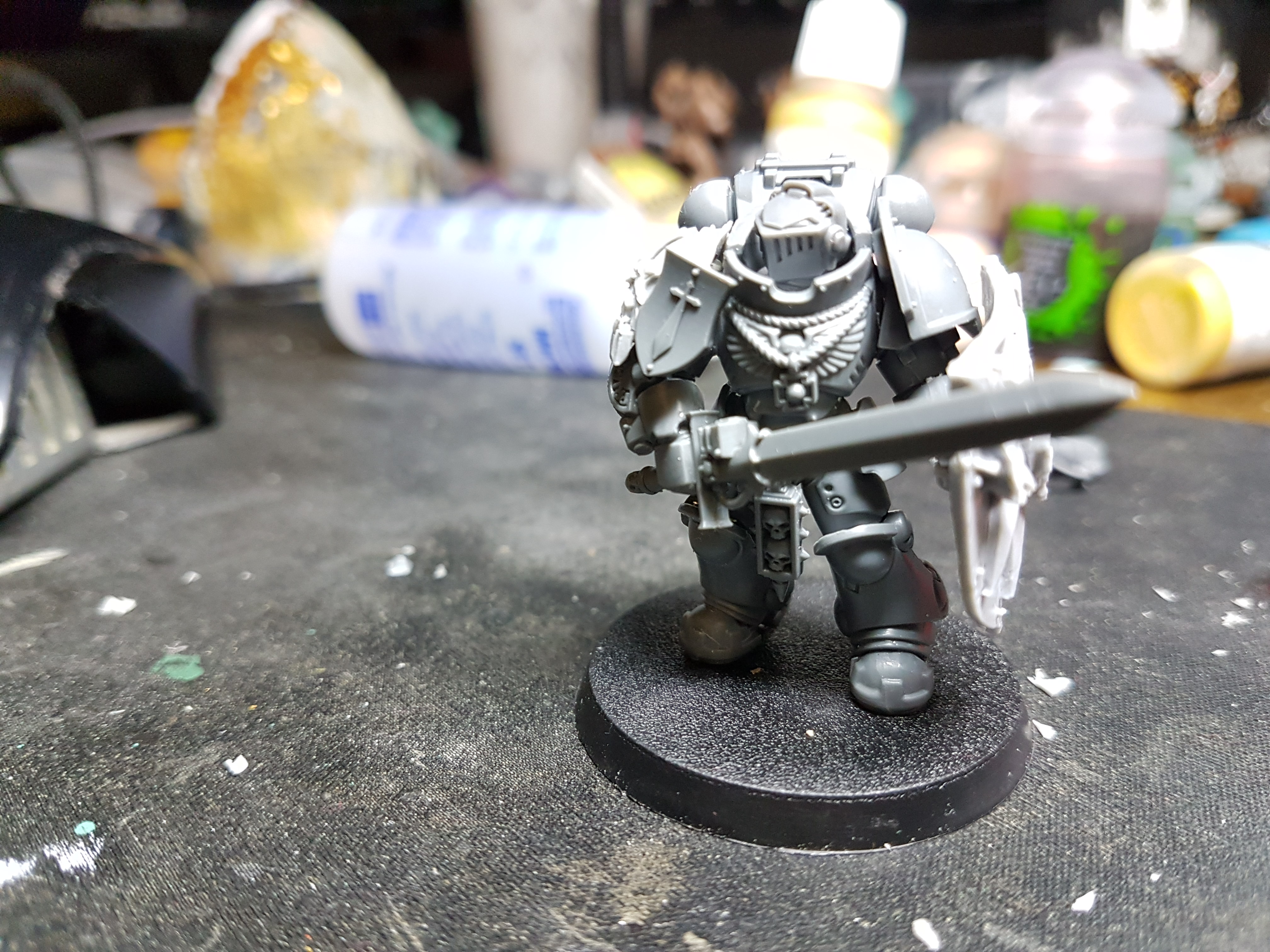 I'm currently working on a unit of heavy Primaris marines, they will either be assault terminators or deathwing knights. 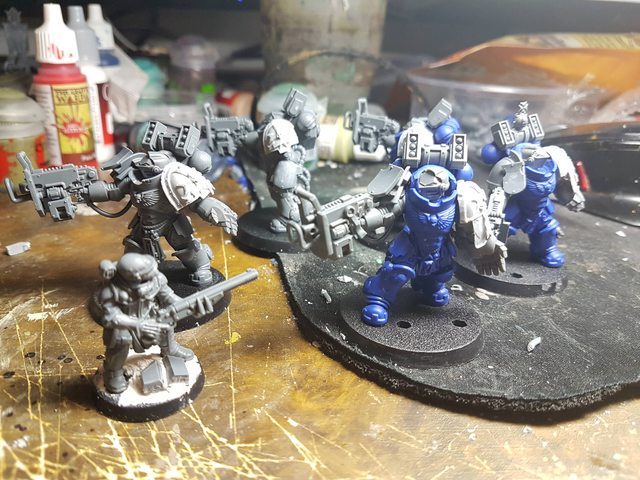 Really liking the kitbashes for the new heavy-primaris, I can just see them striding through an onslaught of enemy fire unaffected, scything through infantry with the heavy bolters and neutralising armoured elements with the missile pods, all the while closing in to finish off with their fists.

I imagined them as zone mortalis specialists, moving down corridors while lobbing grenades over barricades and into mobs of enemies.

Really liking what you've done with the Agressors, wasn't overly keen on them before, but could see a few kitbashing potential options for some of my own! Alas I doubt I'll ever get around to it!

They are crazy good against hordes. Killed a genstealer squad and a trygon in enemy turn one thanks to auspex scan. 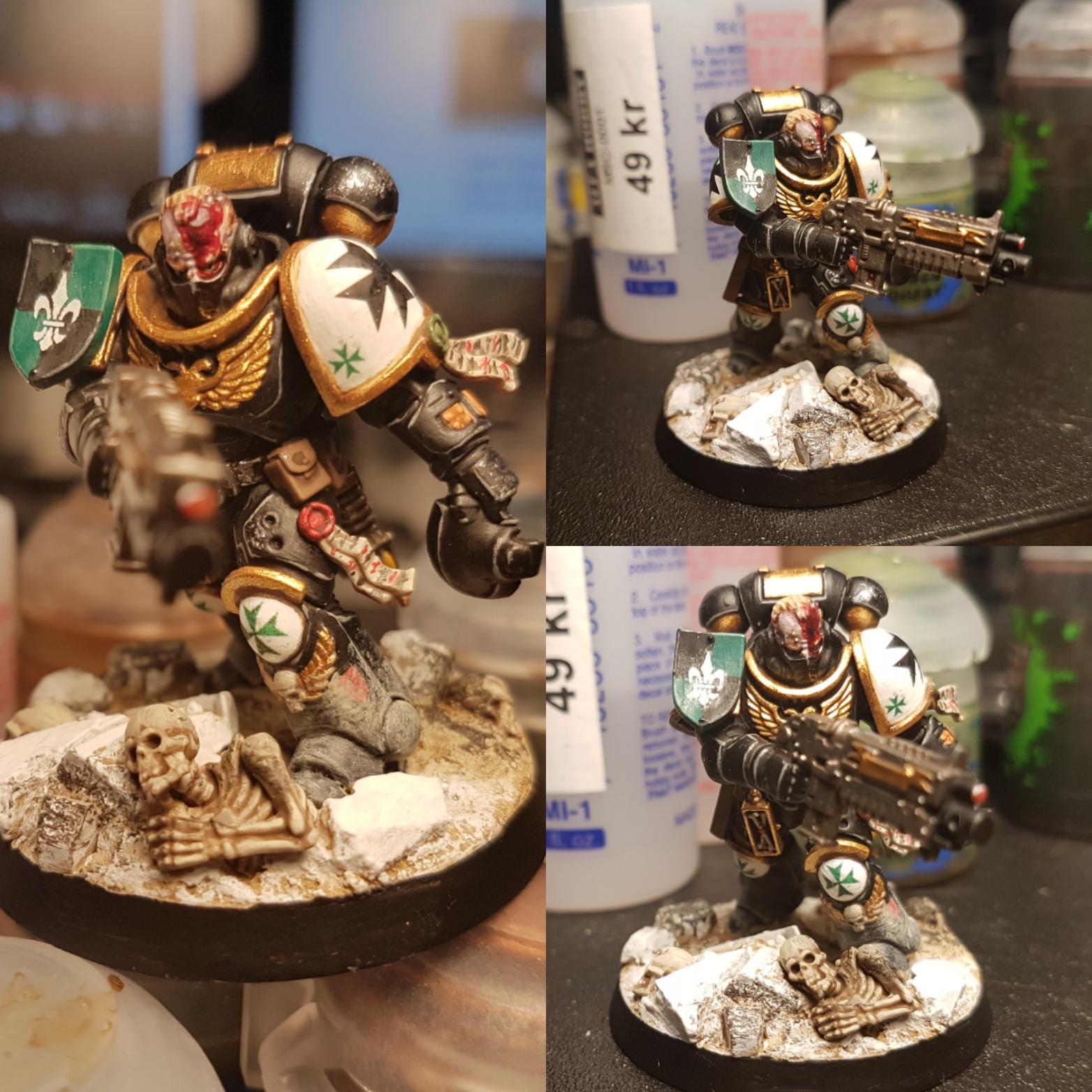 Also tagged with one or more of these keywords: Black Templars, Primaris, Dreadnoughts