Because I'm an uberdork and think I can be a writer I've been tossing an idea around to write a narrative for my force. Any interest in reading something like that? I'm also not sure if I should add it to this thread or put it in the 'write-your-own-story' part of the forums. If I did the latter I thought it would be neat to add links to this thread when certain units are brought into the narrative.

I'm thinking of starting the story with what I have completed right now in this thread and as new units are added here they get brought into the narrative that I right.

For example my tac, assault, and scout squads would be on the ground already. Then the inceptors arrive followed by my terminators that were just done. Now that the devastators are being finished up they would be written in as well. I thought that might make a slow buildup in the story kind of cool to follow the real world progress that I'm making.

edit: Just saw your post about writing. I would say you definitely should post it here, but you could ALSO post it in the Liber forum. You would probably want a separate thread for the writing in this forum, but I am sure it could be both (I have seen creative plogs that do both, so that should be fine). I would definitely link this thread in the Liber thread so folks can see your models (if you Liber thread is just the fiction anyway)

Bases are painted and ready for the final details. I'll add grasses and rocks and then water effects and they'll be done. 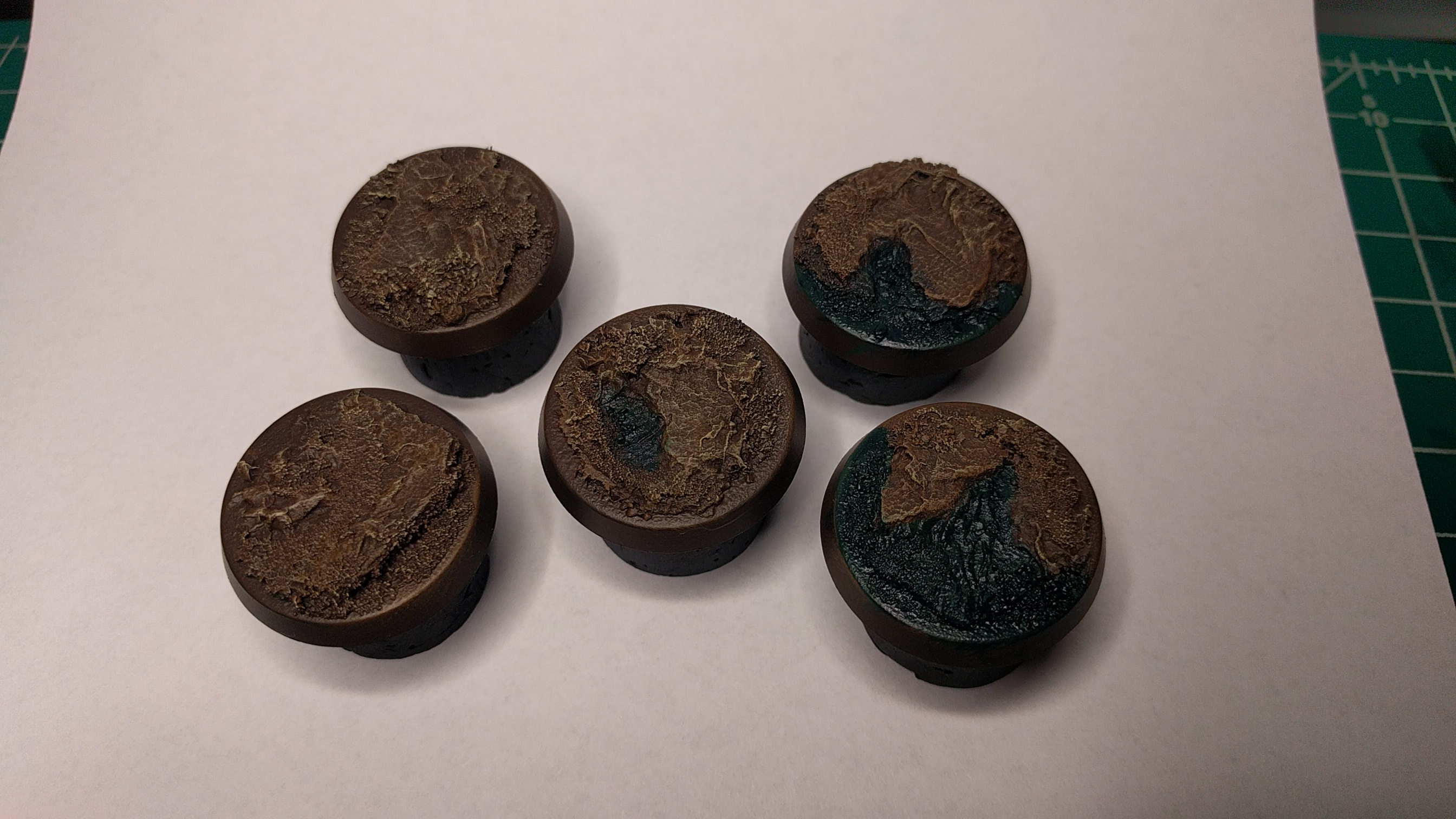 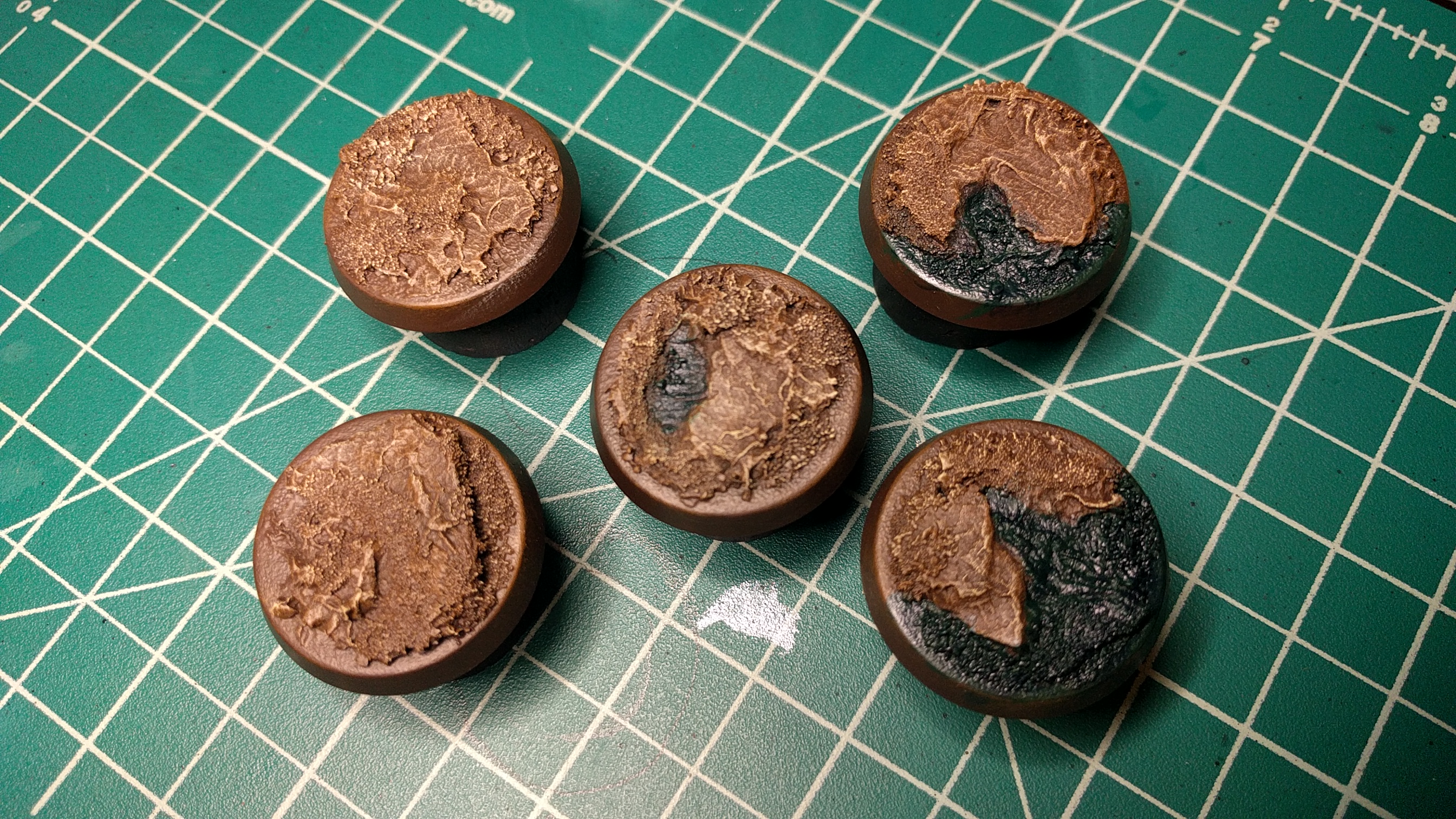 Definitely feel free to post your fluff in here! A lot of members include it in their WiPs. Some make each update a fluff piece in fact.

You could post it as you finish and also update your initial post with it too for quick reference. Looking forward to seeing what you pen!

I've been tossing ideas around in my head while working on my models. We'll see what I come up with. I know anything I do write will be simple and straightforward but I think it would be fun to add in.

In the mean time I've finished the bases for my devastator squad. I do still need to clean up the edges but I was too excited to take pictures before I did that.

I've also put an album together than has a whole tutorial on how to do what I did: https://imgur.com/a/bBvDn 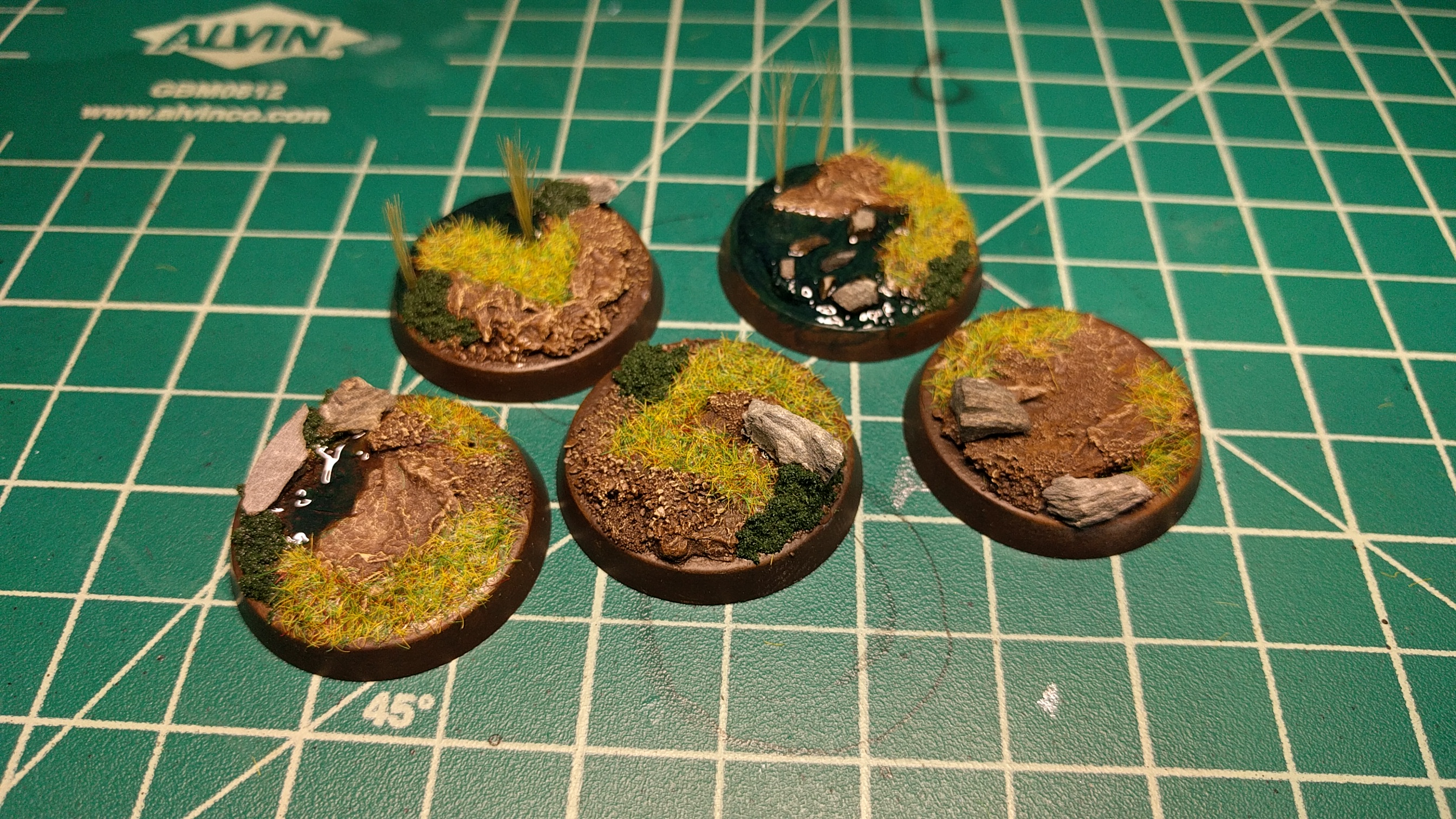 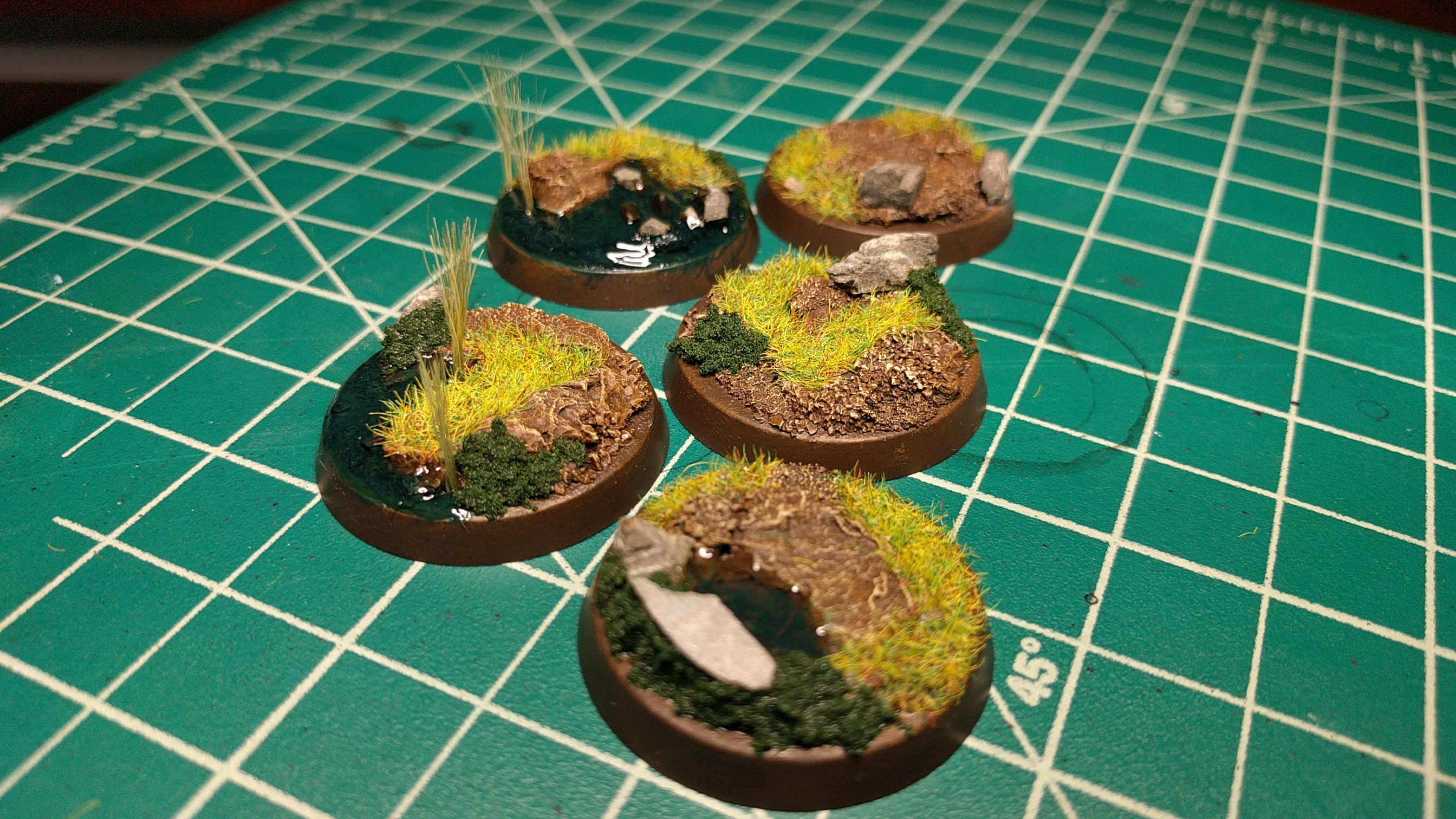 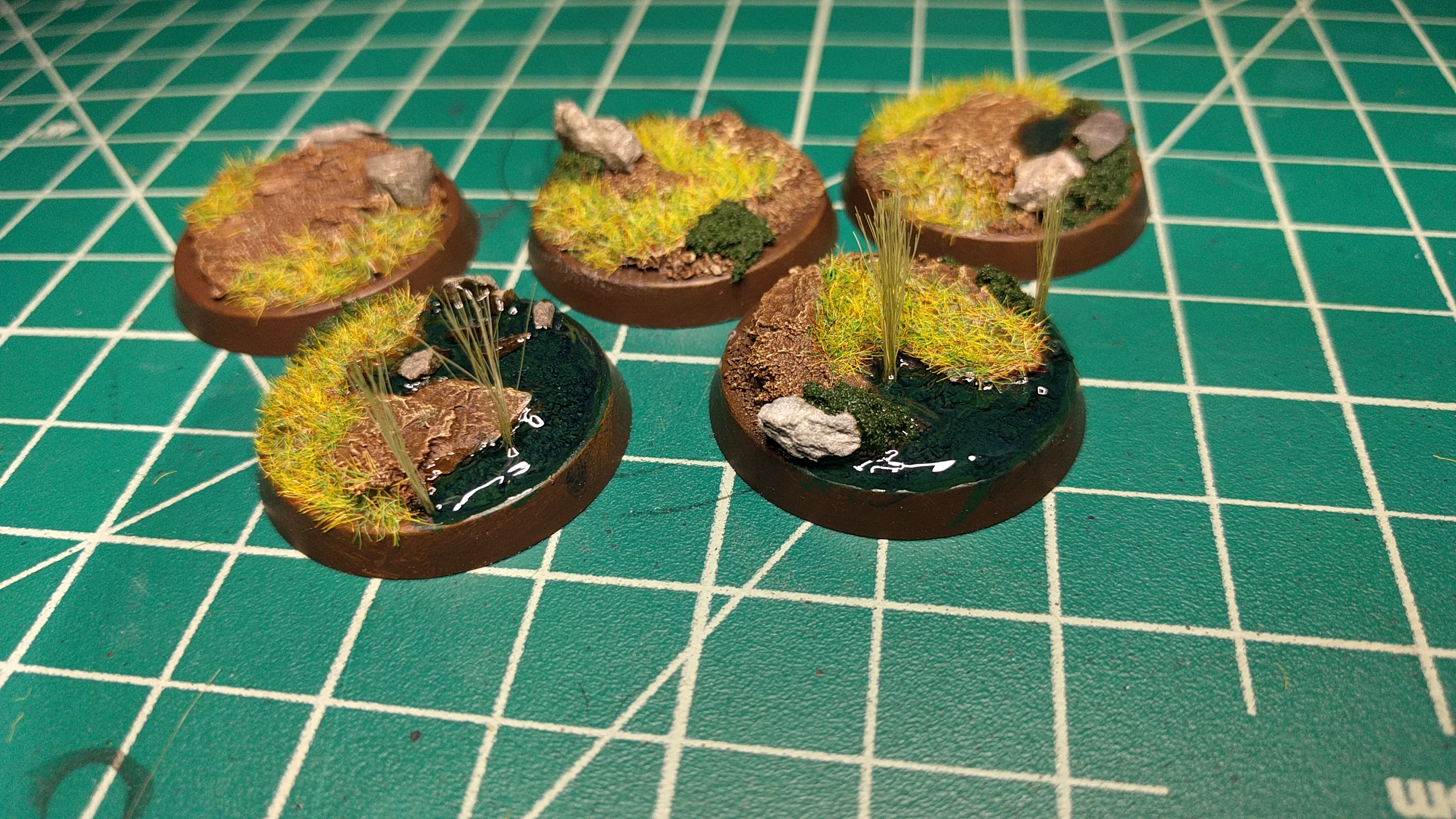 And here's the mostly complete squad on them. Armless guys in the back will have Plasma Canons once they're done being painted. I took a break from painting guys to work on these bases. 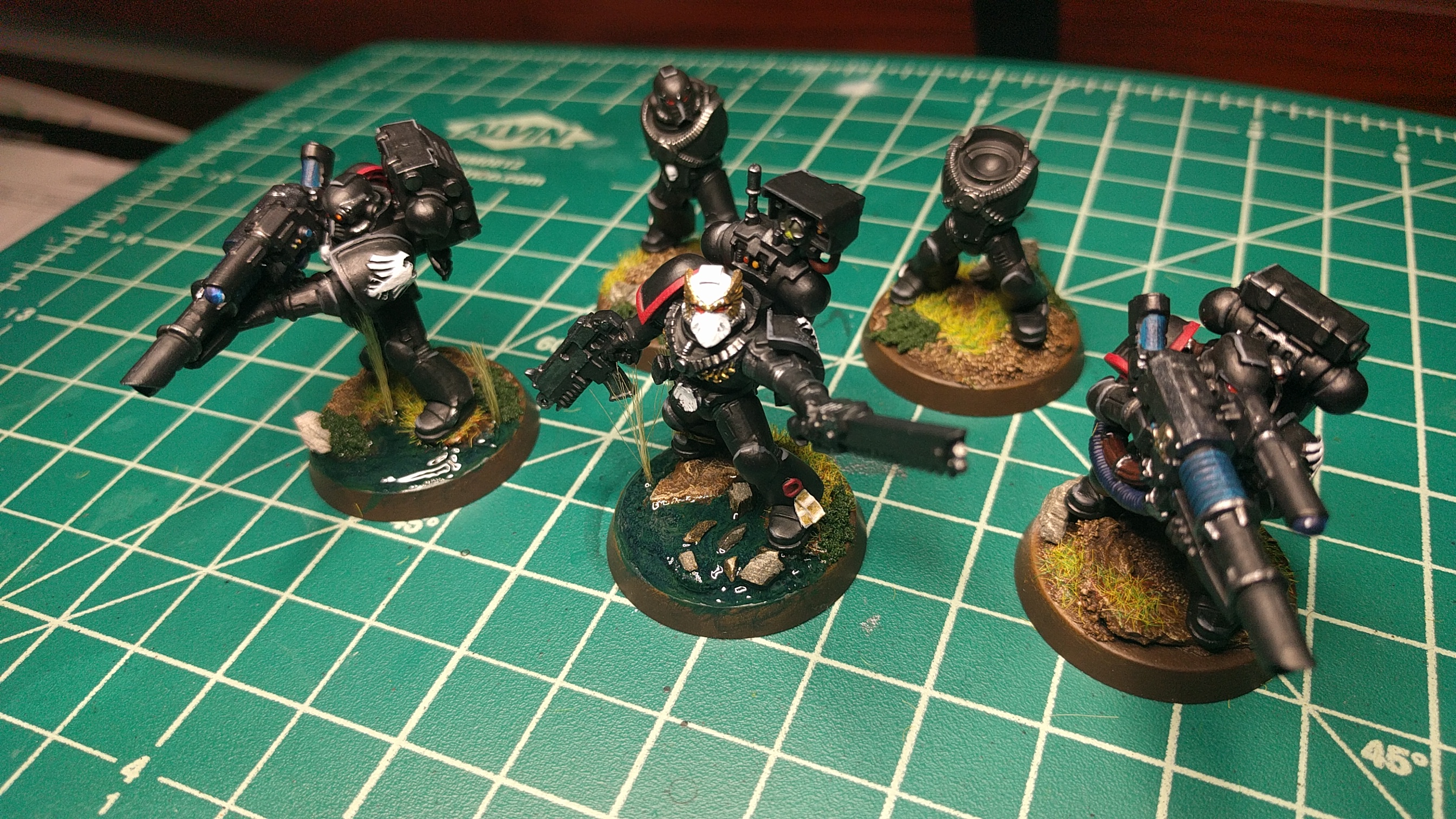 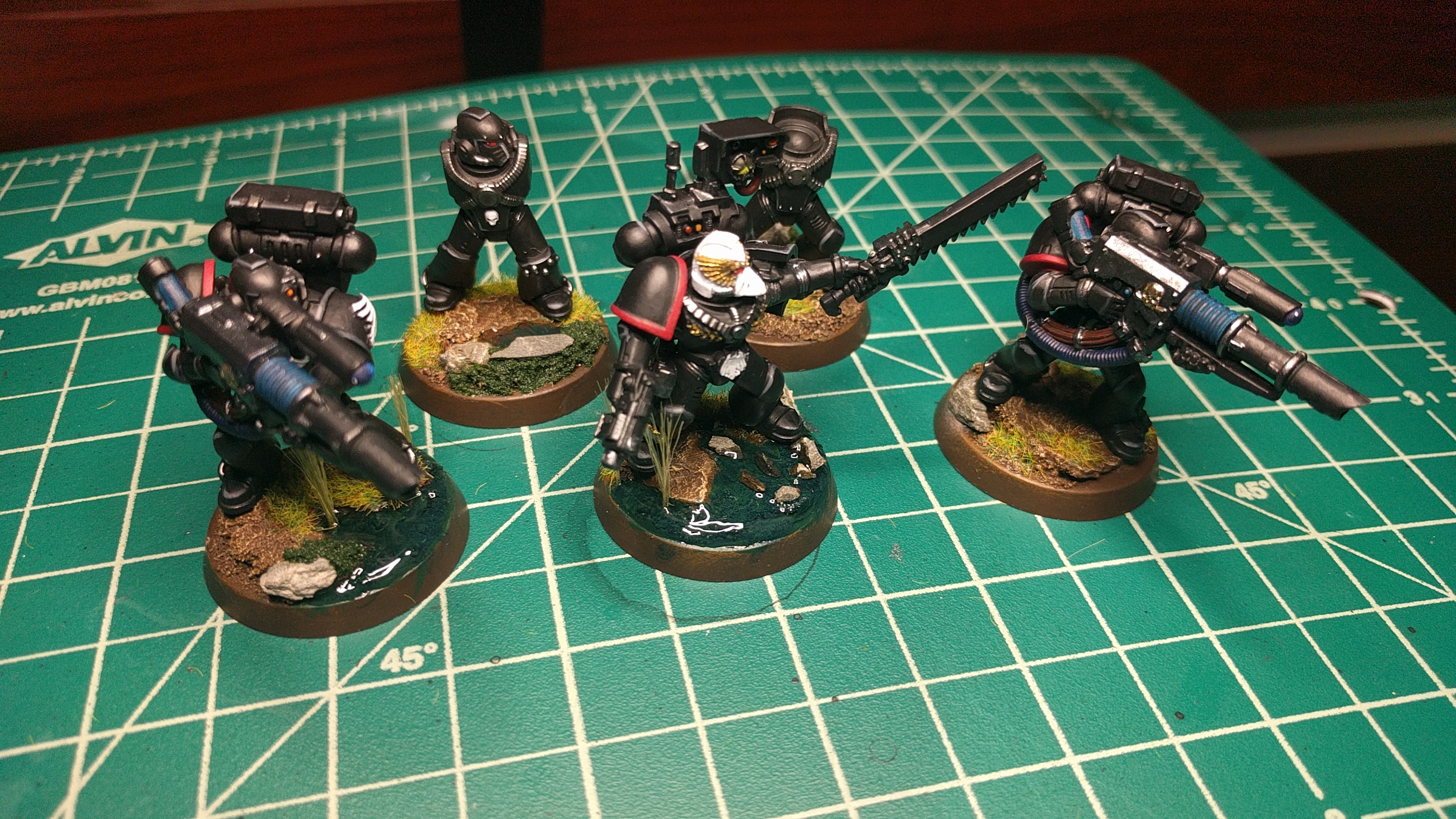 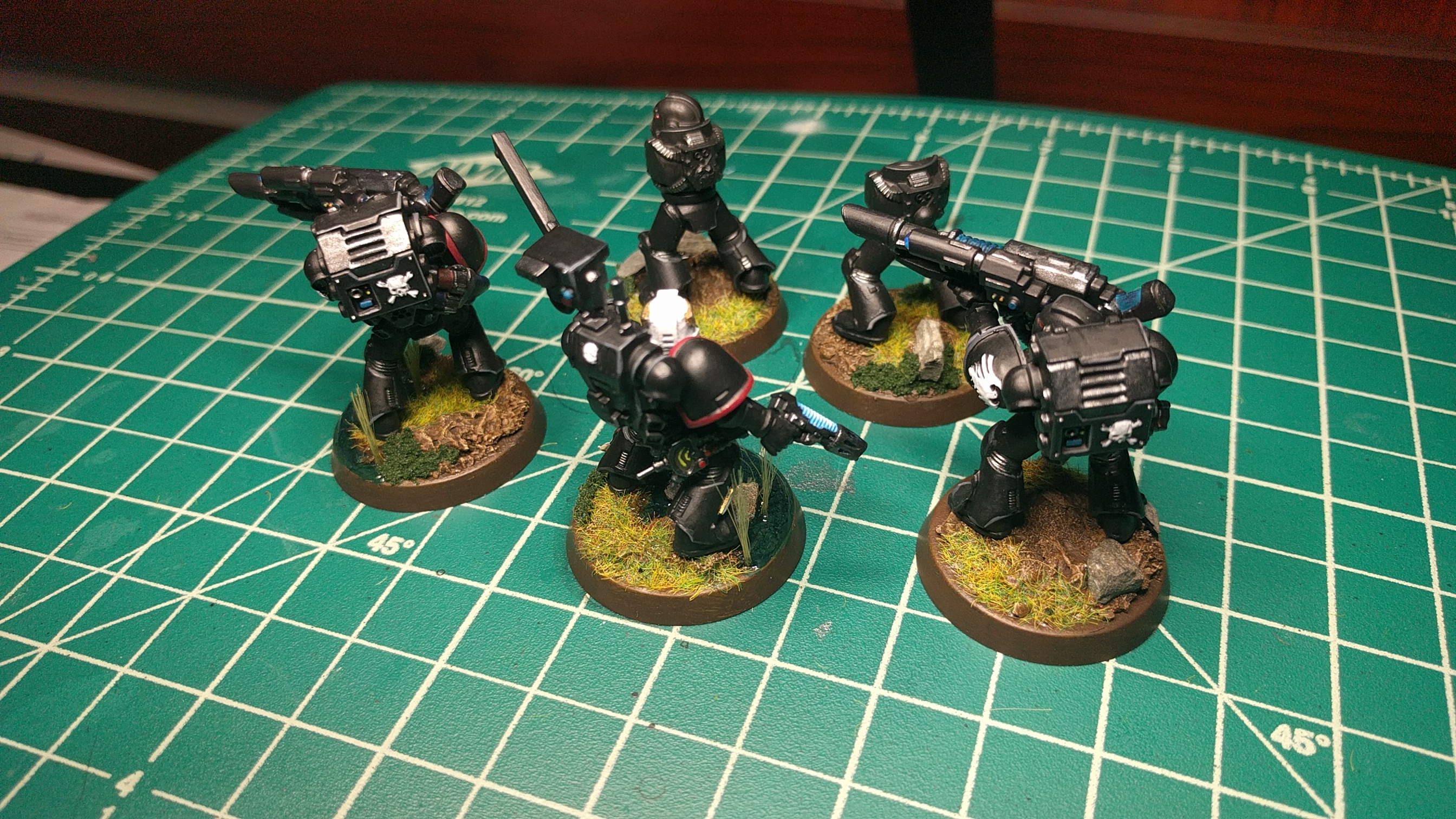 Thanks, they didn't get pictures of the models though

Plasma Cannons were base coated and had their first layer of wash applied last night. I'm hoping to get these finished up in the next week or two and then get a game in. 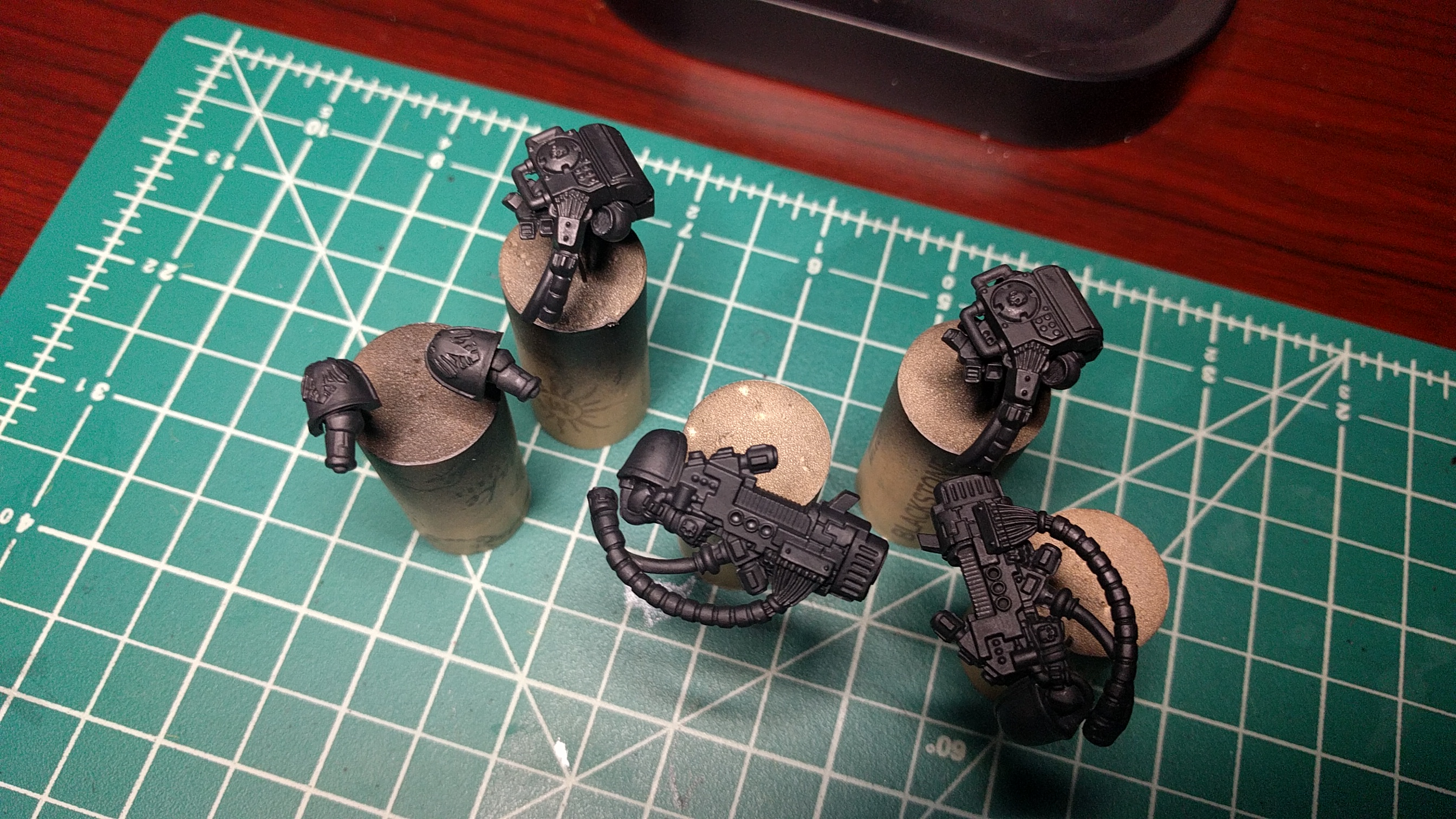 Got the base silver done and the final wash. Now it's on to highlighting edges and other small details for the Plasma Cannons. After looking at them I'm thinking I need to add a little more silver to the receiver... it's a lot of black and I think it might look better if it was broken up a little more and not so monotone... thoughts? 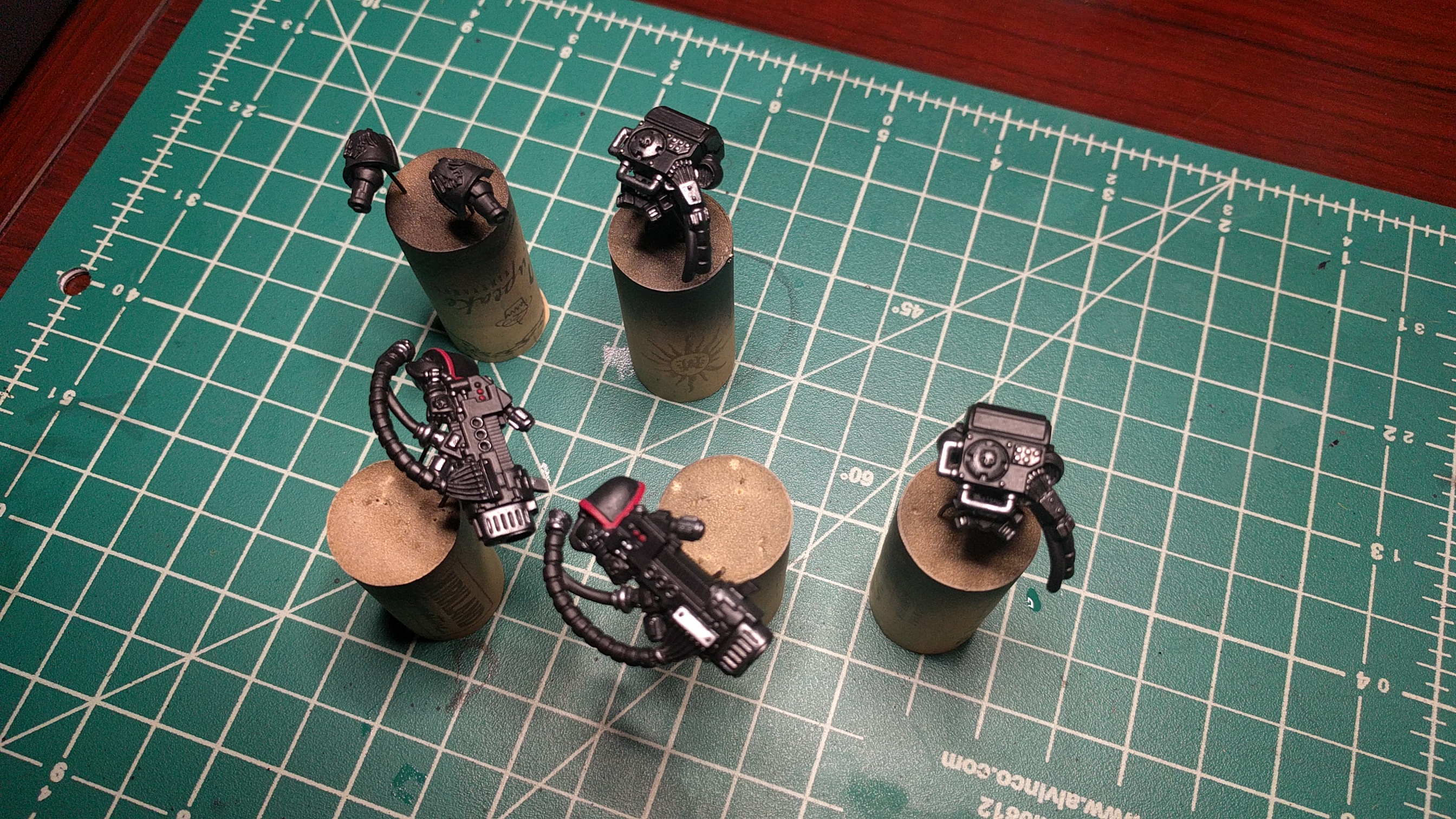 I also saw an awesome Lias model for sale in a FB group. While I'm not going to buy the model I really really really liked how they did the camo on his cloak. The seller was nice enough to give me the pattern he worked from and his recipe so I am going to try and emulate that. After this squad I'm going to work on some bolter scouts. I think I'll try to make them some cloaks from green stuff and paint this pattern. If it doesn't come out well I can always make new cloaks and I'll be able to field the models without them so I don't have to worry about being held up. 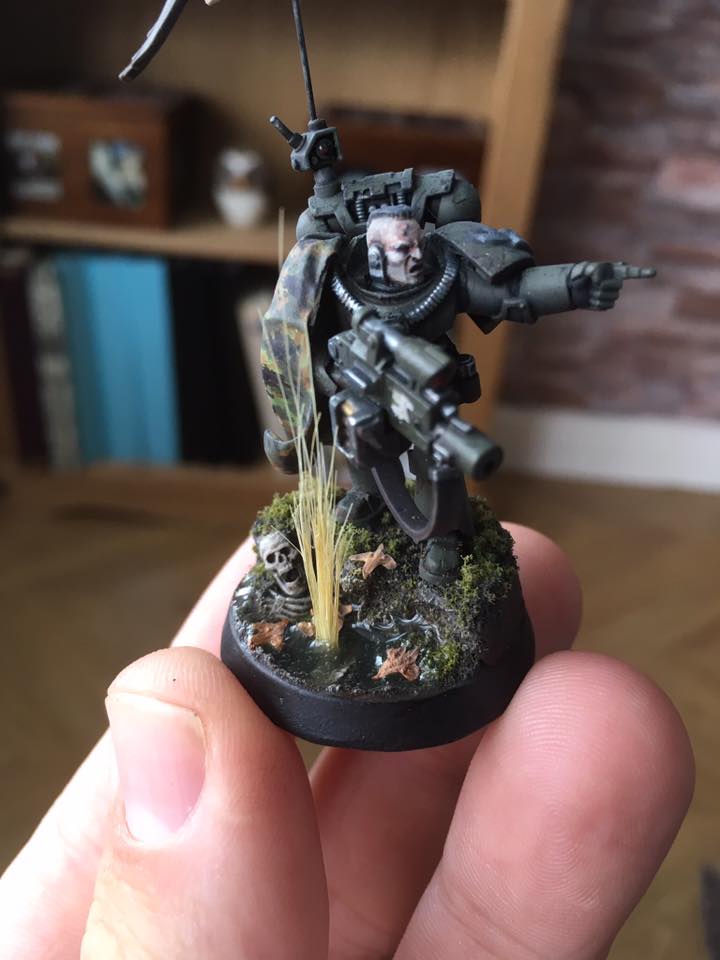 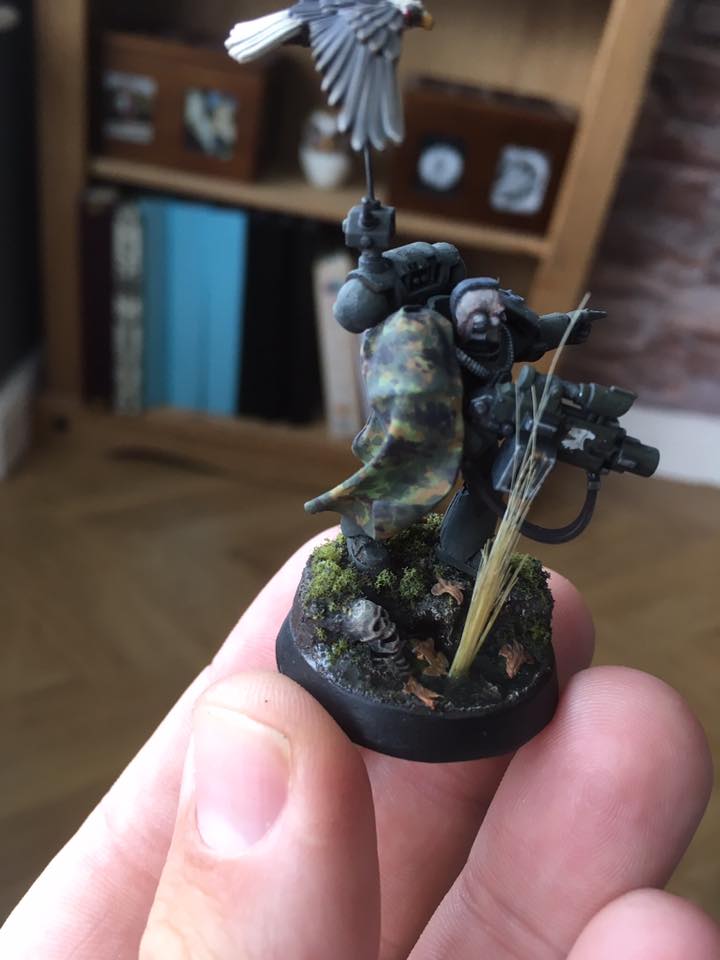 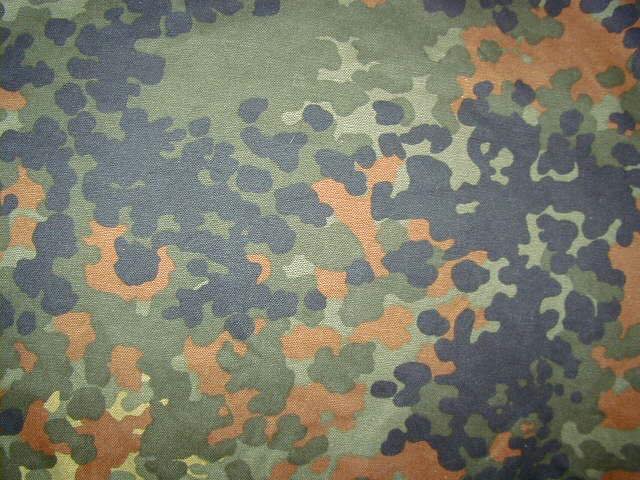 I think it also really helps that the base on this model is similar to mine so I think this pattern should fit right in.

Here's the current pattern on my sniper scouts: 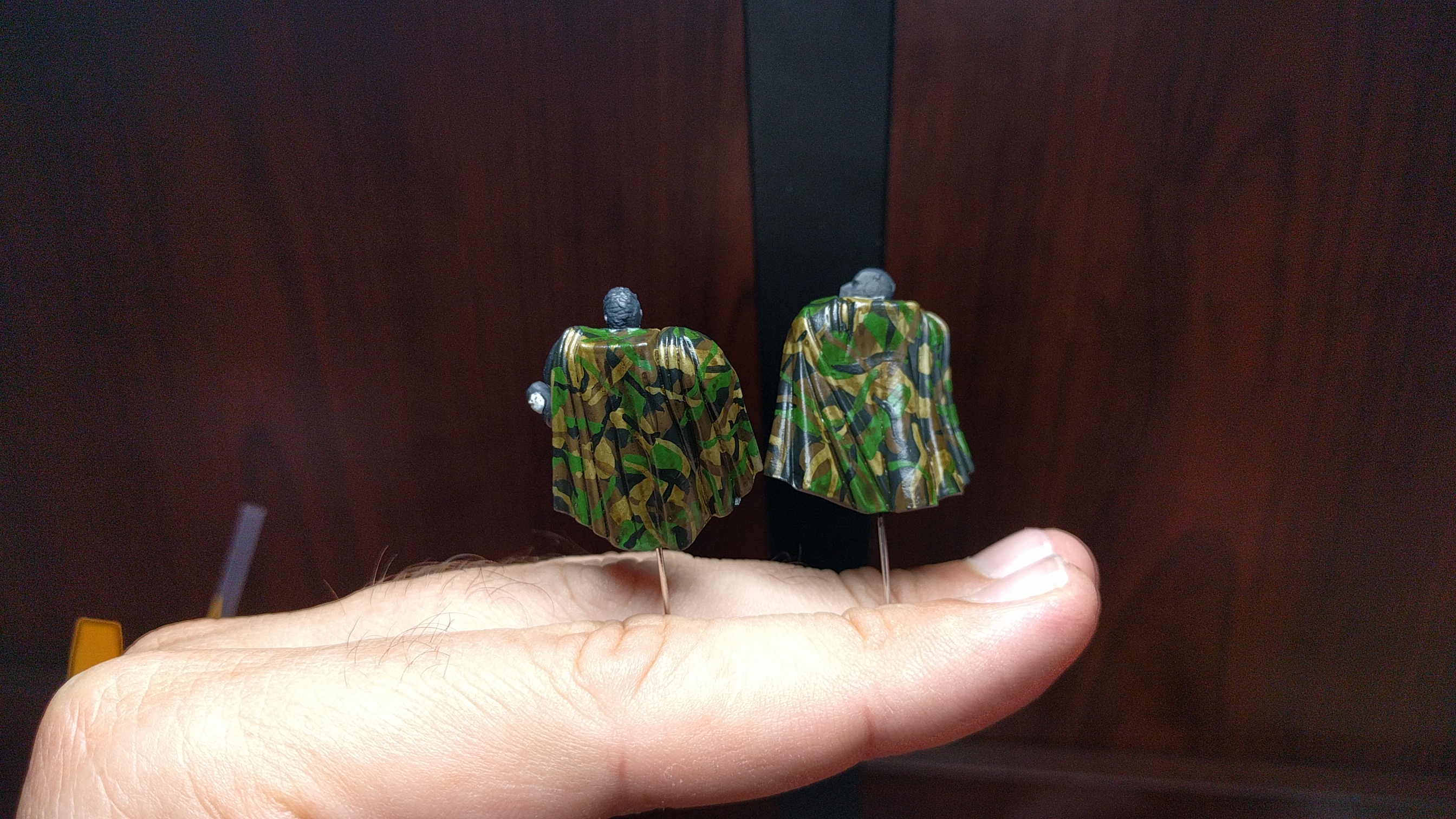 Starting to look finished! I'm actually really close. I need to do the edge highlights on the black and finish the arms. There's white that needs to go on the ravens and then I can assemble them. Very excited. I wanted to push through and finish but I know my limits and I was just at the point of being frustrated (kids coming in and out, TV noise, etc). Better to pack up and work again at a later time when I'm fresh and ready to get the brush dirty. 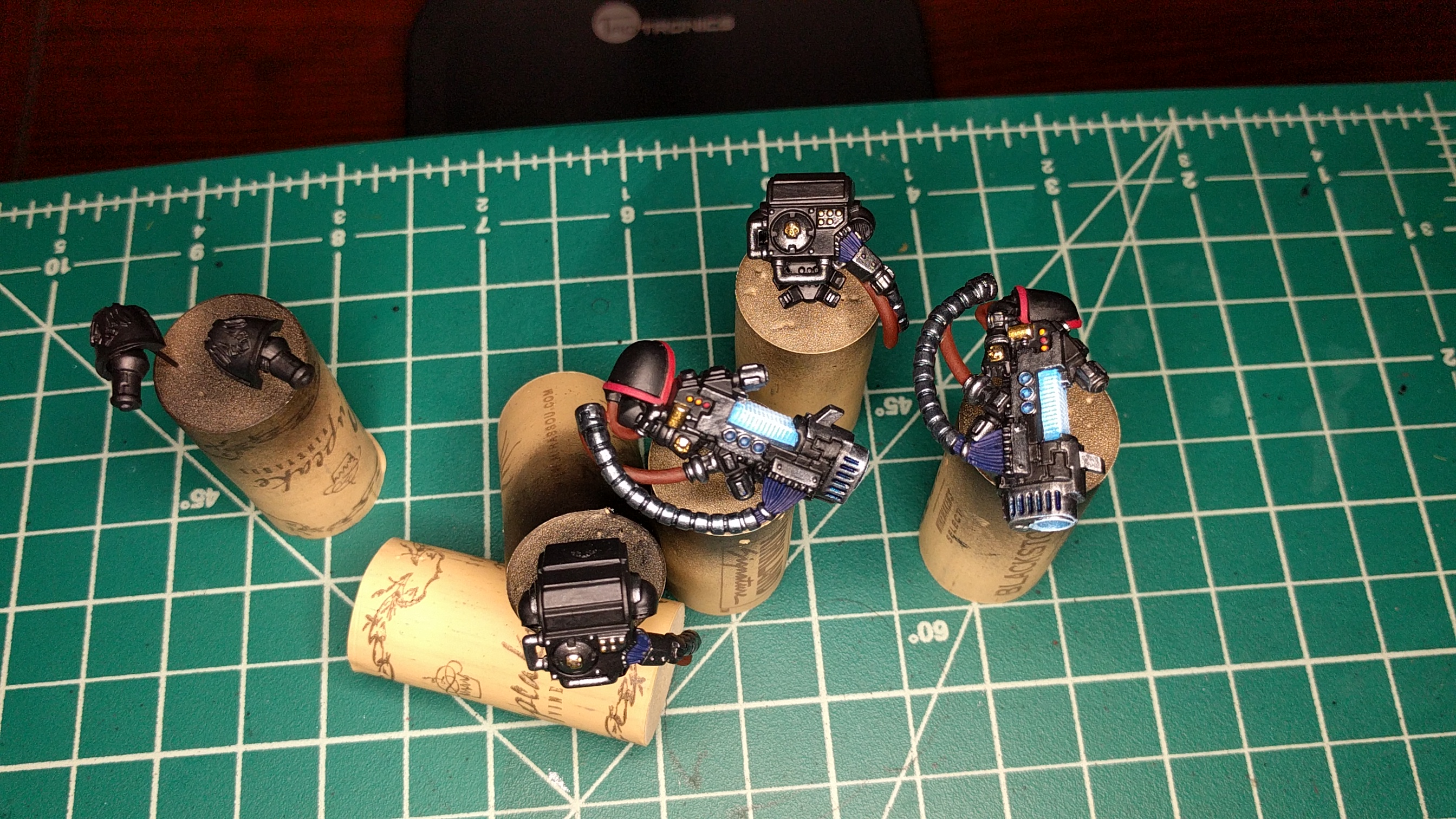 I like the nice clean look on them!
I hope I can get that on my Primaris marines

Plasma Cannons are done! I can now field a fully painted dev squad

What I'm planning on doing is painting up one more heavy bolter and missile launcher. Then I can run two squads, one ML x 2, LC x 2, and the second 2 heavy bolter and two plasma cannons. The first can deploy deep and the second can deploy a little closer or SFTS into an opportune spot. If I can get them both 11-12 inches apart and plant Shrike/captain/LT in the middle they all benefit from rerolls and hopefully be a source of many wounds. 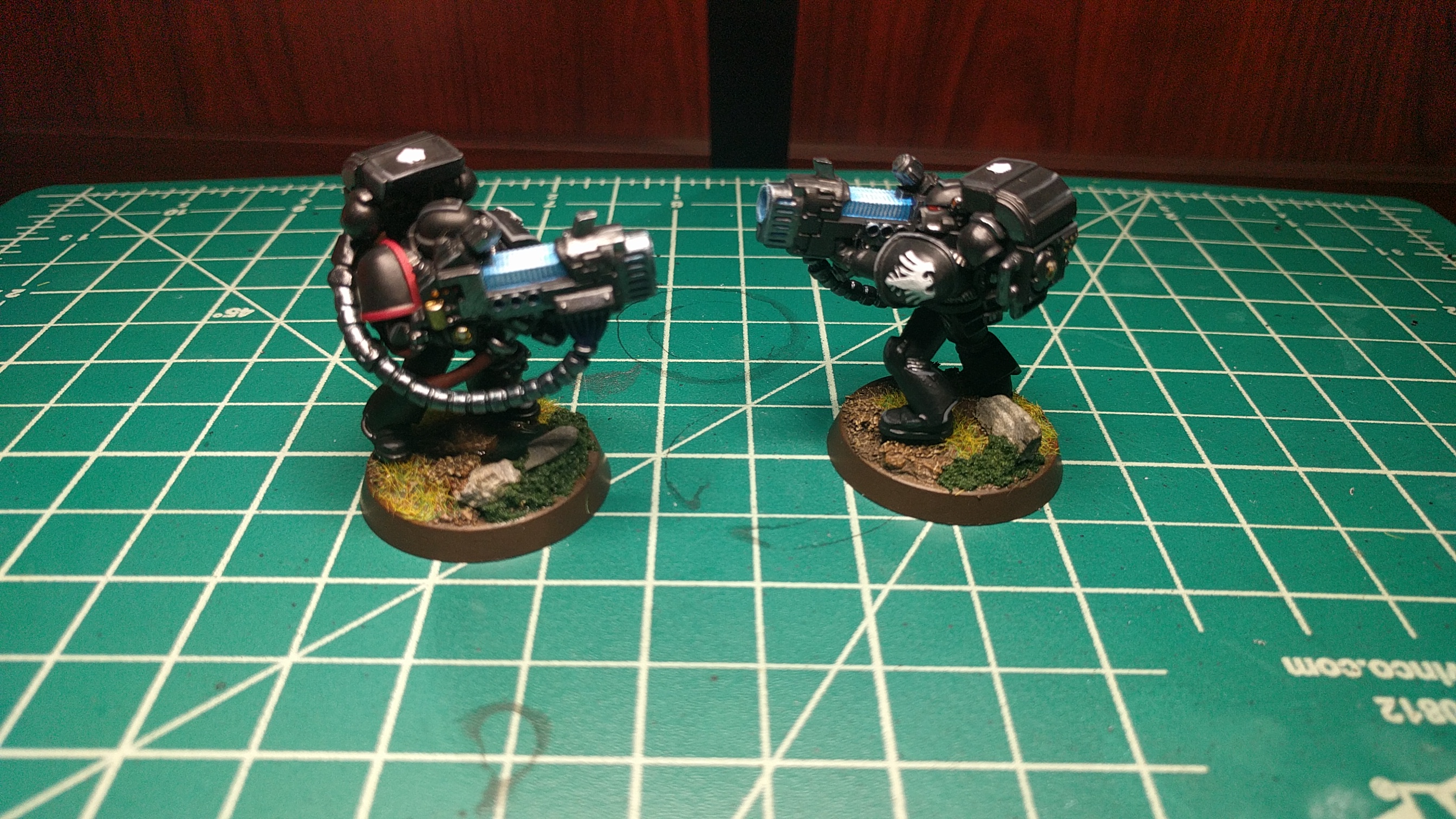 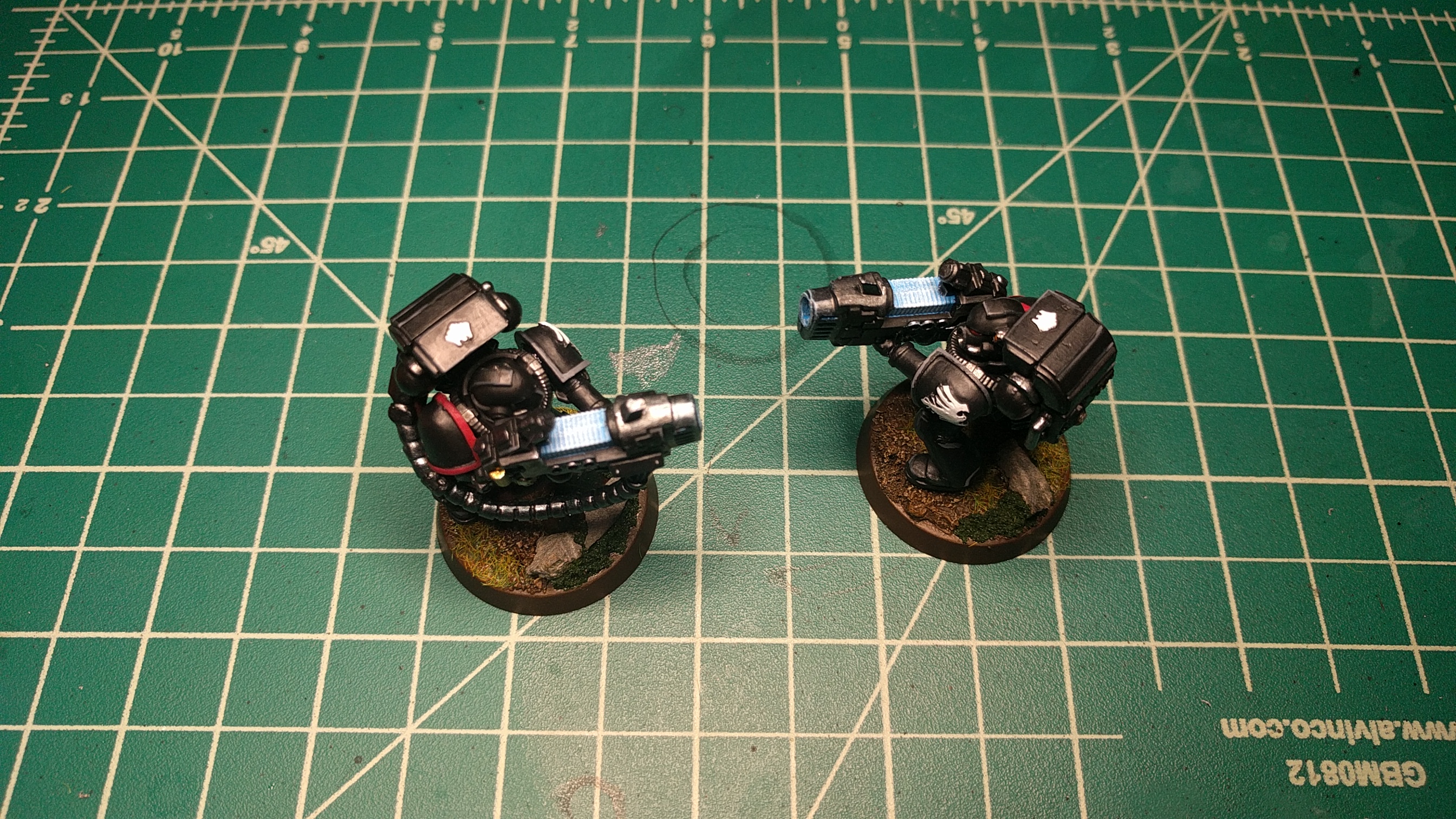 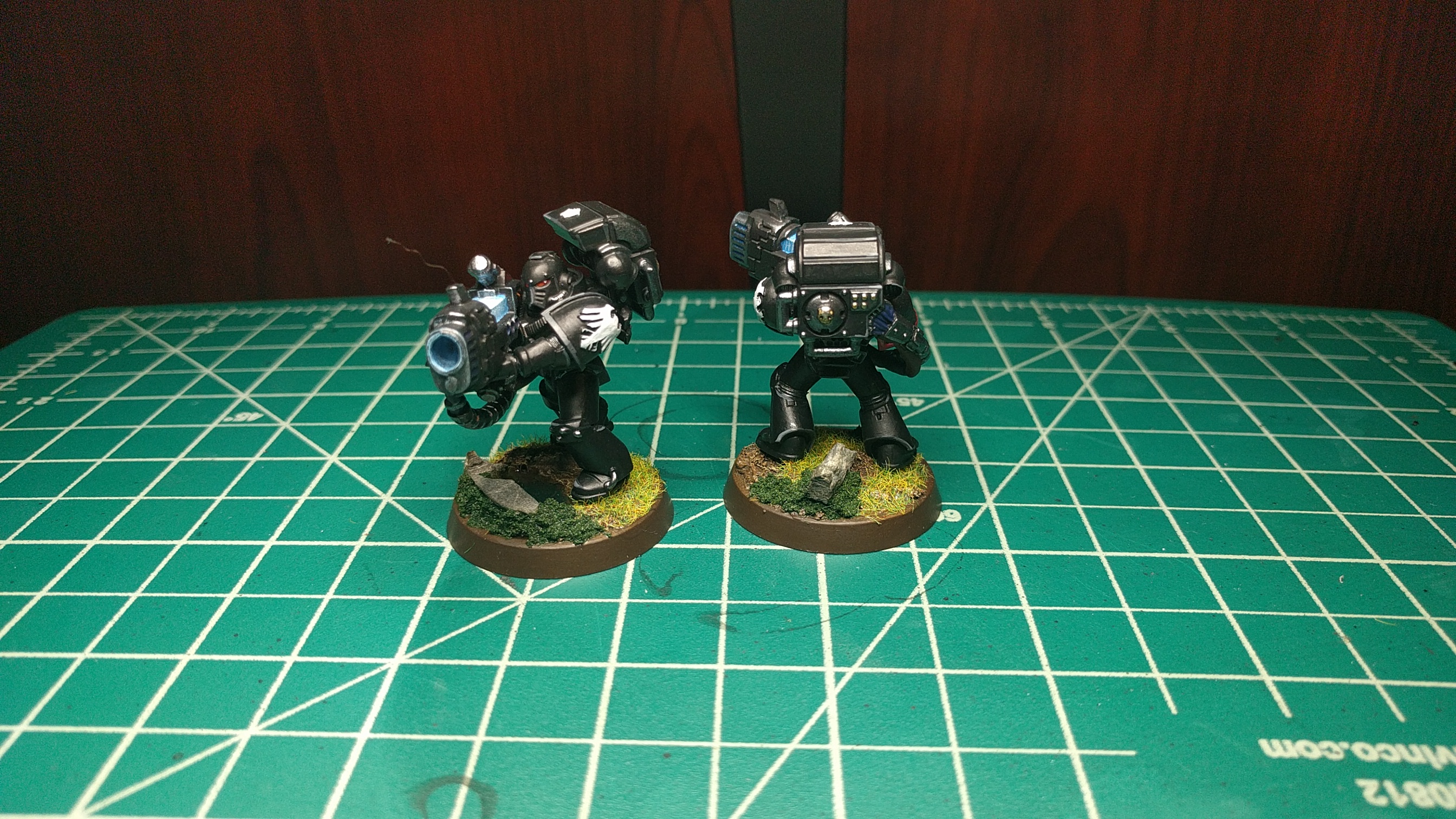 hrm... i told myself no more purchases until I get more stuff painted but I just found a Shrike model brand new in the blister. I'm not a fan of the model but it is THE Shrike model...

I also think I'm finally going to take the plunge and get an airbrush so I can start painting vehicles. I've spoken to several people I know who are phenomenal painters and they've steered me towards the badger patriot and compressor. I can pick up the compressor at Michael's when they run a 60% off coupon and get it cheaper than anywhere else. The airbrush I'll probably wait to pick up until after I get the compressor.

I'll have to be patient and realistically might not get the whole setup until early next year.

Thats the way to do it!

They just had a 60% discount on the weekend I believe!
Also watch out on Amazon, I scored mine when they randomly had 40% off which beats the 60% of Michaels

Certainly helps for vehicles! And getting base coats down on other models!

Watch some youtube videos, I like the OrcPainterNerd (?) the long war guys have some... they're painful but some nuggets in there.

I've read a lot of people say to start on paper/cardboard. Practice spraying so you can get used to the action on the brush, try different pressures, make a consistent straight line, etc.

I actually just bought my trio of badger primers for that exact purpose too! (Apparently theyre the bees knees) Spraying outside here is near impossible most times of the year!

Yeh I tried that for a little ... maybe an hr or so then got bored. Was a good opportunity to learn how to clean the brush though. Definitely watch some of those videos for tips.
Best way to learn is on models though. Maybe start out on the bottom of a rhino though.

Ps apparently grey primer is the best option if you want to use an airbrush to max potential an use various techniques. Annoyingly it seems getting fancy whilst painting predominantly blast is kinda tricky.

That's one of the reasons I want the brush. Painting black is tough since it's on the far end of the spectrum. I don't plan on going crazy. I think black panels but using a dark grey on all the edges will really help to make the modes pop. We'll see. I watch videos off and on. As I get closer to purchase I'll start watching a lot more.

love the base tutorial

I liked 1500pts at the beginning of 8th and most of 7th. Now I've the hang of things I don't mind playing 2000pts. Its certainly faster than 7th. I still like the list building restrictions 1500 imposes though.

I only have the one unit of sniper scouts done. I have bolter scouts built (mostly, I'm still debating on magnetizing them so I can go between bolter or CC, but the models don't make it easy). I will be working on them next and getting them painted so I can have more area denial in my lists. Plus a unit of scouts is cheaper than a tac squad so I can squeeze more into my list in other areas once I get them done and playable.

Id go bolter or shotgun scouts for this edition. It made more of a difference before when you couldn't rapid fire and charge.
Yeh the scout models leave a lot to be desired.

I can't really think of a time when shotguns trump boltguns... If I'm going to advance and shoot with shotguns I still can't charge, and then I'm closer to the enemy for them to get me. A boltgun seems to make more sense since most likely they'll be in rapid fire range in the same range band as when the shotgun would shine.

Also since I'm raven guard I think assault squads or VV make more sense for CC units, not scouts who only have a 4+. I think boltgun scouts with camo cloaks in ruins are the way to go.

Side note: What color are our LT helmets supposed to be? Sgts/captains are white... is an LT white with black striping? I thought I saw a picture in one of my books at one point but I cannot find it anywhere now.

Also tagged with one or more of these keywords: WIP, Raven Guard, Space Marines, Painting