So after looking up artwork ideas on how to paint my shiny new Armigers in House Cadmus colours, I realized there's actually nothing out there for that livery.  I figured others might be bummed by this fact and want to see what others came up with, so i decided to post pics of what I've decided to do with them for the sake of others interested in the Household.

I should note that part of the colour choices i made went off-kilter to the traditional colour patterns because of the decal sheet in the Helverins box.  Normally, depending on the Household you paint them as, you'd use black Aquilas on a red background, or white Aquilas on a black background.  Unfortunately, the decal sheet in the box comes with 4 sets of black Aquilas instead of 2 pairs of each colour.  I'm hoping that maybe the Warglaives sheet won't have this mistake, but since the cog decals for both kits' shoulder pad designs are on this sheet, i kinda doubt they'd catch what they did and fix it.

Anyways, onto the gallery!

So to start off, here's the torso work.  The parts were basecoated with Leadbelcher primer spray paint.  Then i coated the brass framing with Runelord Brass.  the piping was Vallejo Black 70.950, and the golden motor housing areas were Vallejo Liquid Gold  'Old Gold'.

The Leadbelcher areas were washed with Nuln Oil, and the brass and gold areas with Agrax Earthshade.

Moving onto the legs, these were done with the same basecoat colours, with the addition of Retributor Armour to do the piston rings on the legs, the waist ring, and the nub tops of the rear calf pistons.  Instead of using Nuln Oil on the legs however, i used Gloss Nuln Oil, because i wanted the thicker pooling it gives, to let it seem like the legs had a bit of oil dripping from the moving areas.  After that had dried, i also drybrushed Stormhost Silver over the legs.

This difference from the torso was because the legs will have more contact with objects when the pilot moves around, causing the metal to scrap against things, making the metal shine a bit more, whereas the torso itself is higher and blocked by the armour plating and the arms themselves, so dried, caked on oil and grease and grime will tend to stick more and darken the metal.

Lastly, the pistons on the calves were also given a wash of Agrax Earthshadeto show them being well greased for the constant movement they'll be undergoing.

Here you get to see the framework with the arms and exhausts attached (in mockup only, i still had a little more detailing to do at this point).  the exhausts were done by putting 2 washes of Agrax Earthshade, followed by a wash of Seraphim Sepia over the Leadbelcher.

Onto the plating, here's the initial colours.  i undercoated everything with Army Painter Greenskin, and then coated them with Caliban Green.

Once i had a general idea of the mockup of how the pieces looked, i stopped to consider how i wanted to do the black and yellow accent panels.  It was at this point i realized i didnt get any white Aquilas for the shoulderpads, so i had to take that into consideration in the design.

As you can see, what i came up with was to use the yellow, which was Vallejo Goldbrown 70.877 (a color match to Averland Sunset in dropper bottle form)  where the Questoris class knights have the black panels on the shoulders.  This way, i could still use the black Aquilas the kit comes with.

Then i did the black accent plates.  This covers the front outer wings of the torso, the back half over the engine, and the right inner thigh plate.  Again, using Vallejo black, as it has a nice matte finish to it.

Satisfied with the choices i made on the plating, i did a pin-wash of Nuln Oil on all the armour plates to hide anywhere my transition from silver trim to color areas didnt turn out perfect, and any armour lines.

I also added more gold to the head and gun arm using the Liquid Gold with a wash of Agrax.

The eye lenses and the hatch lens was done by painting them with Vallejo Liquid Silver, followed by Soulstone Blue.  The Liquid Silver gives it a much better underlay to get that glassy lens effect.

Finally, here's where i'm at right now with the model, one shot with flash, the other without.  The left arm, the Carapace Meltagun, and the left ankle plate still need more work, and then i can start prepping the model for decals.

Really enjoying this. The picking out details in different color metallics on the under carriage goes a long way in giving the model some nice depth.

Just when I was looking around for an armiger painted in those colours this thread shows up to show me a few ideas. I'll be going for camo dark green and leadbelcher trim, but I'm definitely stealing some of the tricks for the smaller details. Also- cool tip with the vallejo liquid silver under soulstone blue.

Hey guys, another update here for ya.  Today i did my Decals.  I still gotta do some goldwork on the left arm, and them im going to coat the whole thing in Purity Seal to cut down the shine.  the shine is because when you clearcoat with a gloss finisher, the decals will stick better, and you dont see the transparent excess around the edges of the decal afterwards.  its a good trick for hiding that you used transfers instead of freehanding it.

I'm not sure why GW designed them that way. The single barrels with their circular armor plates look like medieval lances, tying into the general Knight aesthetic. The Helverin is meant to be a ranged Armiger, so it needs a gun on both arms, and maybe two twin autocannons was a bit too much from a cost effectiveness perspective.

Personally, I think they are coming. Like a massive electrified thousand ton ball of barbed wire with hundreds of trapped and frustrated gamers embedded in it, rolling down a hill. "That, Bilbo Baggins, is the sound of inevitability."

Do not suffer your zeal for the Chapter to lead you into argument with others.

for something a little different this time, here's the Cerastus Castigator.  he's still got some details i gotta finish; exhausts, tabard, some pistons and hosing on the right leg, and some trims.

thanks to some OT i've been clocking in at work lately, and a small push from a buddy to play my knights alongside him at an Apoc event in June, i finally bought my first Dominus knight-castellan.

I immediately wasnt too impressed with the kit's overall height, so i've been doing some alterations to make him a bigger boy.

firstly, ordered a set of these knee joints to make the legs longer: 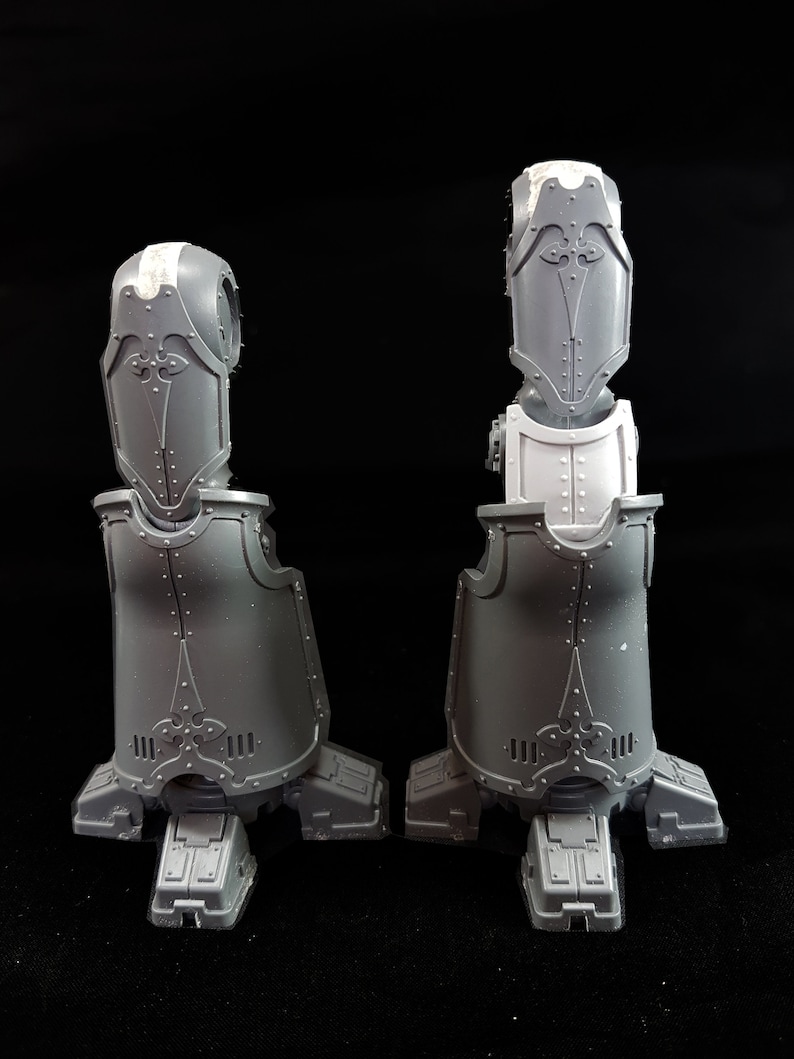 then, while looking around for other items, i saw a neat kit that added soles to the feet, and made the "ankles" taller.  pretty neat, but didnt want to spend the $20 for what should really be a $8-10 mod.  so instead, i chopped some bitz left over from a storm talon's engine assembly:

and then i also added some height into his waist by cutting the ball joint off, and using the exhaust from a storm talon engine to increase the height and re-attach the ball joint.  the assembled bits should've been almost flush before the alteration:

overall, my engine bitz added 16mm of height.  when the knees arrive in a week or two, ill be certain, but i expect those will being the total added height closer to about 30mm overall.

a long overdue update on the work i've been doing for House Cadmus.

A Castellan has been in assembly for a while now, slowly worked on in between other projects.

So to start off like before, here's the core chassis framework.  Primer with Leadbelcher spray, wash with Nuln Oil.  Golds are Vallejo Liquid Gold "Old Gold", and the brass/bronze stuff is Runelord Brass.  Both of these get washed with Agrax Earthshade.

And the initial work on the head.  Mainly done because i wasnt sure at the time what would and wouldn't be visible once all the cabling and plating was in place.

And one of the arms.  the bright silver is Vallejo Liquid Gold "Silver".

Now this is where some of the photos will become disjointed, because i went back and took photos where assembly was more complete, but there's going to be some pics from before with mockups showing things unpainted. so if stuff switches back and forth, now you know why.

here, i was comparing heights with the changes i made to the ankles and waist.  So far, he was made a full head higher than a normal Errant/Paladin chassis.

And then the knees i ordered finally arrived.  now that height is looking more impressive.  And i can finally put paint to the legs.

And now the one arm is coming along nicely as well.  The plasma glow is from the Talassar Blue contrast.

And here we have all the plating so far.

You're a skilled painter.

got some more work on my castellan to show off:

The framework of the models came out absolutely wonderful, great job!

Love that green, it would make a good AT color scheme.

Really well painted it's almost like the picture on the box jumped out and poof there it is lol.

i was hoping to finish it tonight, but sadly my gold appears to have dried up on me.  have to wait until i can replace it before he gets finished now.