Memoirs of a Fallen Angel.

CLASSIFICATION: *Primary Level Intelligence*
CLEARANCE: *Vermillion*
DATE: *451.M41*
AUTHOR: *Visual Record Unit 3140*
LOCATION: -UNKNOWN-
SUBJECT: *Debriefing*
++Audio activation code accepted++
++Vid-capture initializing++
++Warning. No Authorised interrogator present++
++Override accepted++
++Interrogation room 337 Alpha++
++Astartes prisoner - No discernible marks of allegiance++
++Record starts++
Many of my brothers would call me a traitor.
Thinking of many of them, I will gladly take such title and all that comes with it.
I know this to be the truth, as I would call them all but the same. But what is the opinion of masses to one such as I?
I know what I am, despite the millennia of confusion, the centuries of pain and the eternity of war. I know I am a true warrior of the Astartes.
The Imperium as a whole has forgotten what we did for it. Ten millennia of stagnancy, one hundred centuries of religious dogma and degeneracy.
Can your mind wrap its tiny self around such thoughts? You are but one of countless others, all of whom have been born, lived and died pointlessly more times than even a mind such as mine could calculate.
If an intellect such as mine, built from stock of the very homeworld of our species, engineered by science and technologies that have never been replicated since, cannot contemplate such wonders, what chance does one such as you have?
It almost makes me smile.
I know you are watching me, my hidden observers. Your hearts beating so eagerly inside your chests, your shuddering breaths with each word I grace you.
I hear the scratching of your scriveners as they take everything in triplicate, the hushed whispers you share when you think you have captured some unknown nugget of information from the pittance I allow you to absorb. It's almost amusing.
But alas my friends, I tire of talking to these blank walls. You have me here for a reason, I allowed you the grace of my presence for far too long to continue the almost oppressive lull. But you still give me nothing.
++Access panel opens++
++SCANNING++
++SCANNING++
++SCANNING++
++Identity confirmed++
++Inquisitor Lhyras Zhoul. Ordo Hereticus++
Ah! Finally we meet. I was beginning to grow tired of these games.
Please, take a seat. No, you don't have to say anything. You are here to listen, not speak.
I will make this simple for you, as we do not have a lot of time.
No, questions are not needed just yet. We will get to them later.
I know you have the pict-captures, I know you have the images of them all.
Bring them out and I will tell you everything. I will answer all of your questions before you even ask.
But first, the simplest answer of all.
My name is Barquiel Myda.
I am a true son of the First Legion. Born of Terra. Forged by war.
And this is the truth.
++Record ends++
Hello to all.
I am a bit of a hobby tornado and am always starting projects that never get finished.
But me and a few of my buddies have all jumped on a new year/new army wagon at the moment and I have fallen on The Fallen!
This army will be my go to this year and I am aiming for about 2500 points.
I also want to try and build/model it all so it can be played as either Dark Angels or CSM. So it's gonna be interesting!

First and foremost, let's see some pictures of what we have so far!
First off the build pile.
Tactical squad/CSM squad. 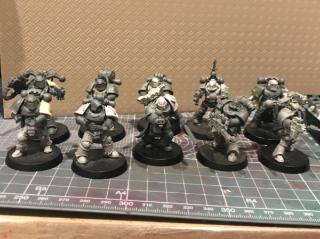 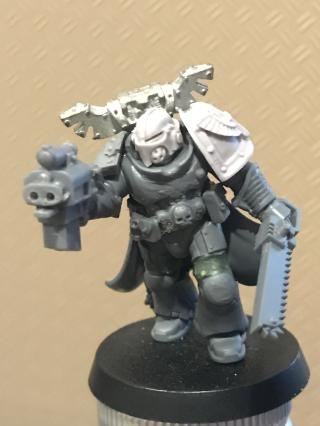 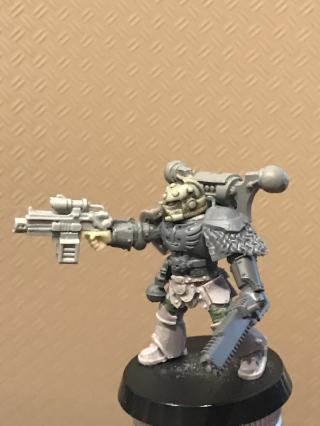 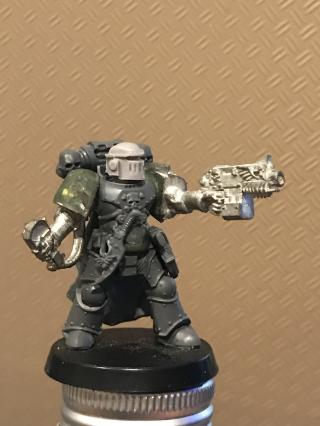 I am doing a little bit of size variation to these guys, I can't understand the idea of marines all being so uniform in size.
Here's the second brother compared to a standard veteran. 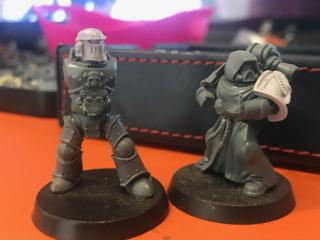 Next up is the SGT/Champion for the first Veteran/Fallen squad.
I imagine this squad is made up of former Destroyers, so I wanted him to look a bit more brutal in his bearing. 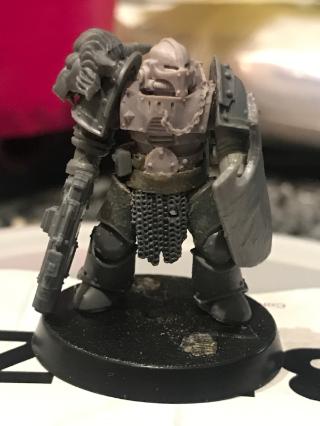 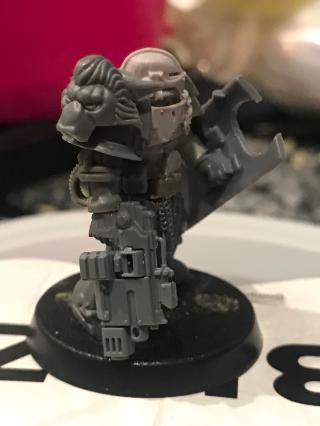 I have always loved the Destroyers. Brothers who were shunned by their own legions, in so many cases they were openly hated.
It almost makes you want to betray your oaths to the Imperium and strike out on your own!
Last but not least, some glorious Devastators/Havocs. 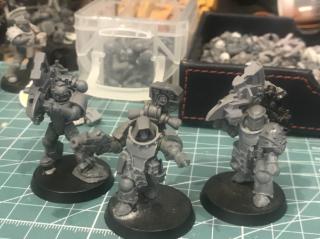 There's something about a missile launcher that makes me happy.
I think it's the ability to destroy dreadnoughts.
That's it from me tonight.
I have a whole mess of other bits that I have started for this army so far, but I am trying to make myself stay on target with this!
Until next time.

I eternally consider doing a Fallen army, but the lack of support in the CSM codex always puts me off. What are you planning to run the non-Fallen stuff as in the CSM army?

That Fallen sergeant looks amazing btw. Where are the torso/head from?

Kraad! Bout time you got your Fallen up here. Great to see them. Looking good as always and may this give you the push to get a single army finished for once

These are really solid, what a great set of figures, the ex-destroyer champion in particular is just spot on with a more brutal, medieval styling.

Dang dude these are awesome! Can I get a parts list on that Sgt?

Fantastic work on those models! They do have that slightly sinister vibe that will make them work rather perfectly as Fallen/CSM! The Destroyer Sergeant is a fantastic conversion, and I also rather like the left bolter guy! #

Really looking forward to your next update!

Great conversions man! I'm particularly enamoured by that former Destroyer turned Fallen Champion, he's giving me a kind of 'robber baron' vibe that I kinda wanna steal adopt for an idea I'm cooking up at the moment... 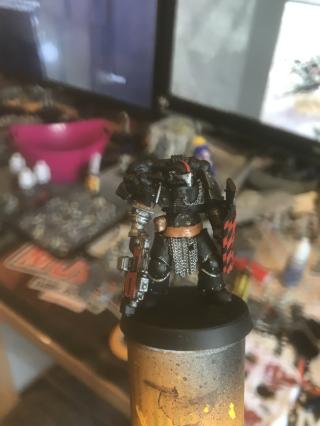 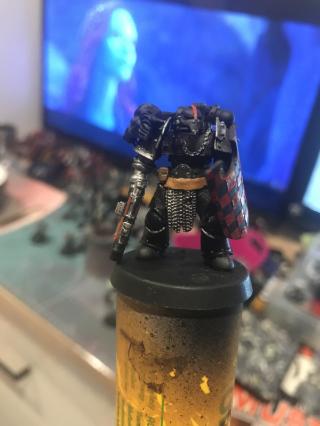 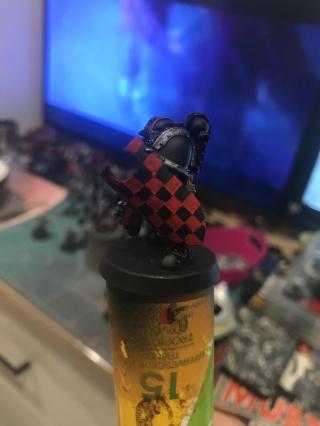 It is just basecoats at the moment, but I have had a minor crisis of the painting variety because of a WIP log I saw here.
My original plan was more of a black/grey mix, with finer highlights in grey as the layers went, but then I saw the AWESOME work by Johanhgg. His Consecrators have driven me to a more silver/grey highlight, with the red accentuation in the armor, as opposed to the original black I had planned.
This put a bit of a delay on my painting efforts, as I am a really slow painter and I was getting far too ahead of myself when it came to trying to emmulate Johangg's scheme.
Please leave him hateful comments on how awesome his minis are! (On a serious note, please do go see his WIP, they're fantastic! http://www.bolterand...-consecrators/)
I plan on really dirtying up the shield and cleaning up the checkers before i start focusing on the rest of the mini.
But for now, it looks like I am out of time.
Have a good one lads, ladies, mechanical death robots and alien insect hive-minds from beyond the stars.
Kraad.

Awesome, each marine is unique and really carries it's own flavour. They really stand out as individuals. The fluff is well done too and really adds to this project, looking forward to the next part!

Also tagged with one or more of these keywords: Fallen, Dark Angels, Chaos, Traitor