"The weak will always be led by the strong. Where the strong see purpose and act, the weak follow; where the strong cry out against fate, the weak bow their heads and succumb. There are many who are weak; and many are their temptations. Despise the weak for they shall flock to the call of the Daemon and the Renegade. Pity them not and scorn their cries of innocence - it is better that one hundred innocently fall before the wrath of the Emperor than one kneels before the Daemon.""

- The First Book of Indoctrinations

I must have been on-off on-off with regards to Warhammer over the years, largely because of the numerous projects that I've started and lacked the motivation to finish. With this in mind, I've decided to start anew. I'll list anything that I am working on, such as the new Cultists I'm prepping for an upcoming Escalation campaign at my local Games Workshop, but I'll avoid setting targets for myself. 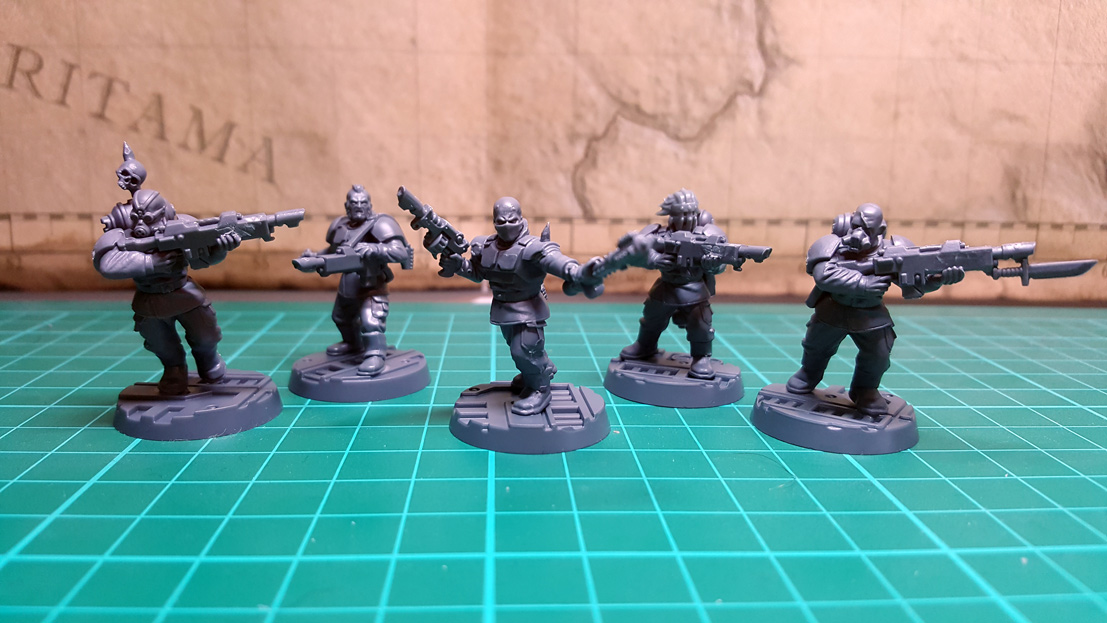 To kick it all off, 1/3rd of one of my Traitor Guard/Cultist squads. I wanted these dudes to stick to the "former IG" aesthetic as much as possible whilst making it clear that they aren't loyalists anymore. To this end I used the GSC Brood Brothers as the base (or the Cadian Shock Troops, I forget which) with some heads from the GSC Upgrade Frame, a Flagellant head, an Orlock head and some arms from the Skitarii Rangers.

I took stock of some spare Space Marine melta bombs that I had lying around and I've been using those to represent gas canisters. Although, the thought of doing a suicidal cultist all strapped up with melta bombs and krak grenades for dealing with enemy armour is enticing now... 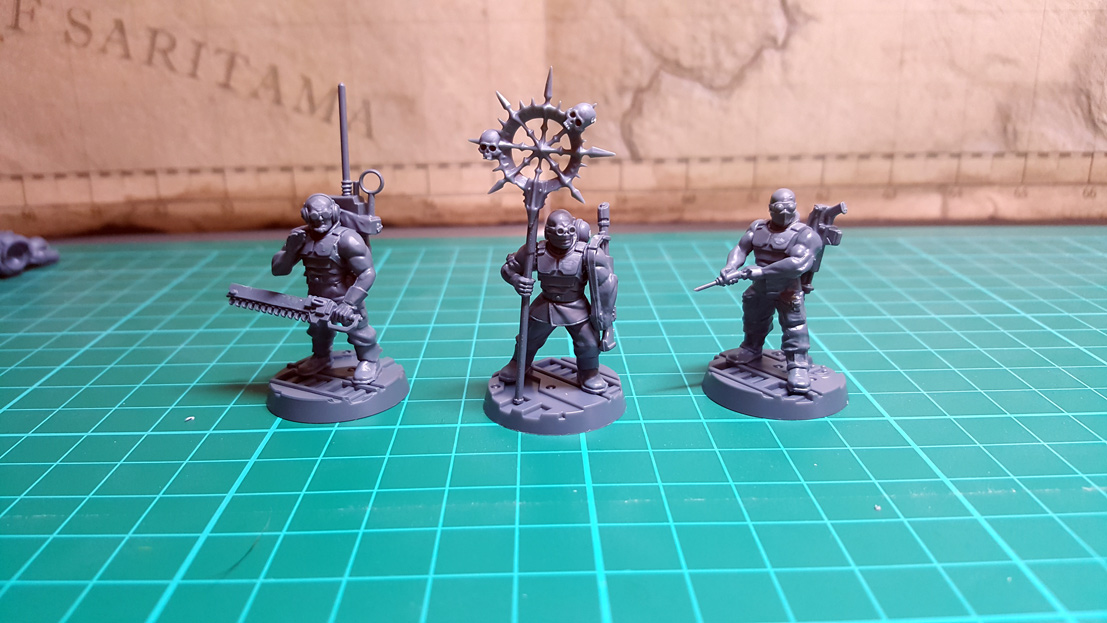 An Icon Bearer and two generic Cultists. I wanted to break up the squads a bit, so they weren't just stacked with autoguns and heavy stubbers. The Vox Caster and the Medic seemed like practical additions to the squads as well; I imagine that even the Traitor Guard recognise the need for a well-trained surgeon from time to time, and I like to think that it's a bit of a holdover from their days as loyalists. I used a mixture of bits from the Cadian and Catachan command squads, as well as the icon from a Chaos Chariot. I threw in some leftovers from the GSC Upgrade Frame for good measure as well. 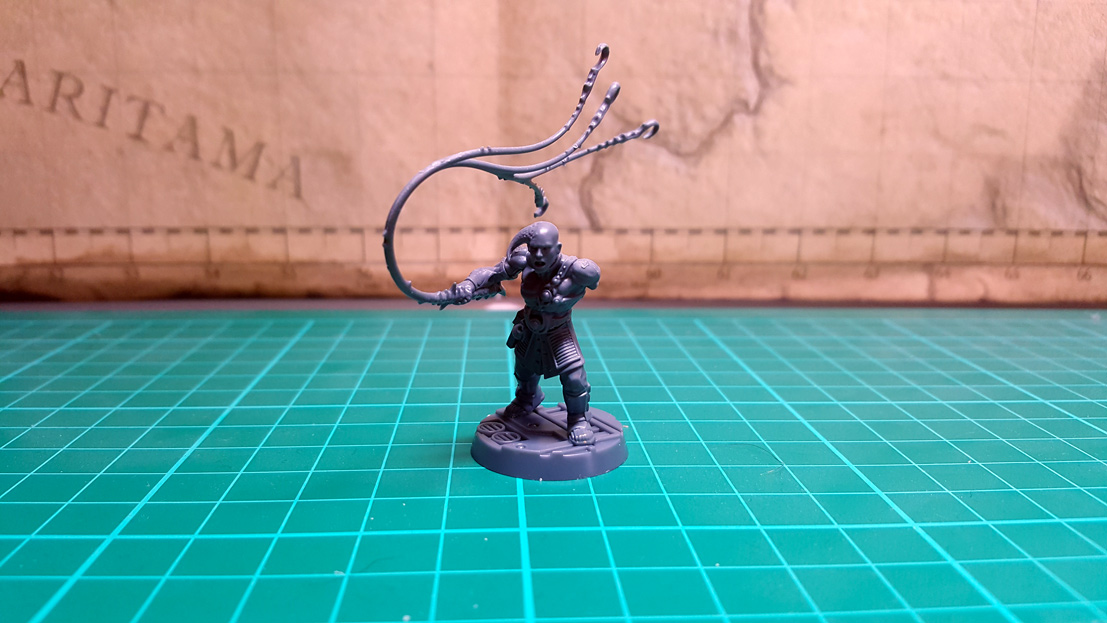 Last but not least; a Slaaneshi Enforcer that I started way, way back in 2017 and never got around to doing anything with. Now that I'm actually working on my Traitor Guard/Cultists a bit more I feel like it's time to finish this dude off. He was converted up using bits from the Hellstriders of Slaanesh kit and some Neophyte Hybrids.

I'll post some more up a little later this week when I'm ready to show off the rest. I've got some greenstuff/plasticard work to do in the meantime!

And we're back with another few Traitor Guardsmen to add to the army! 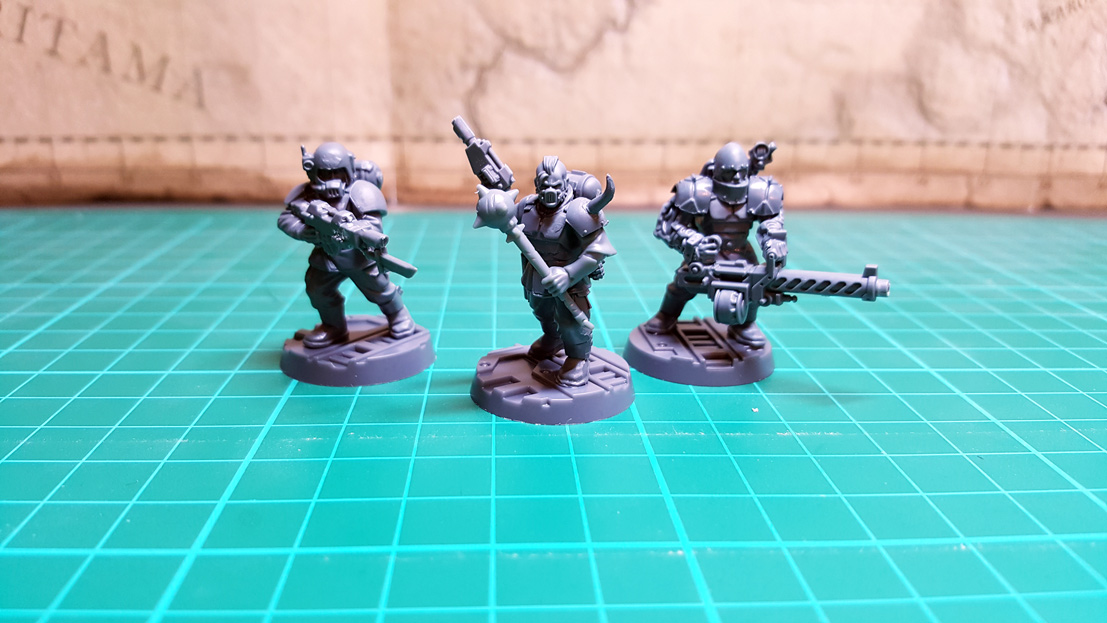 Just a few simple mixes again; Cadian Shock Troopers bits, a pair of Flagellant arms, an obligatory Orlock head, Marauder shoulders and the spike off of a helmet, some Space Marine melta bombs and a Bretonnian head. I really like the central dude (he screams badass to me - plus he reminds me of the Dark Vengeance cultists/Blackstone Fortress Traitor Guard) and Heavy Stubber bro (who was actually the first Traitor Guard I put together for this project). 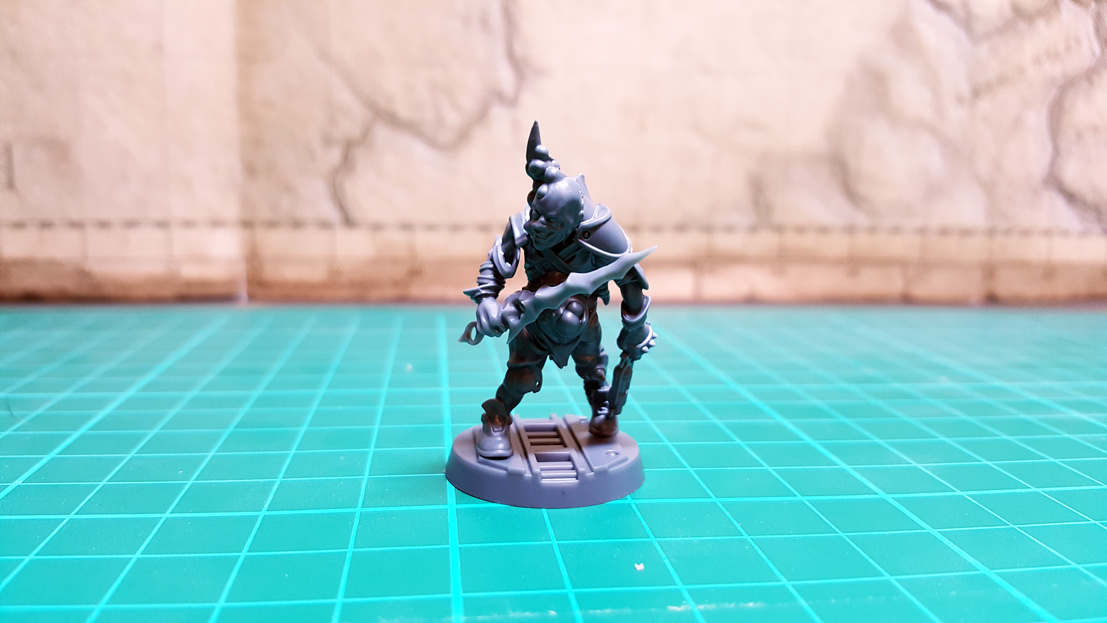 ... a burgeoning Nurgle Cultist, converted out of a Rotter from Blood Bowl, a Plaguebearer knife and an Orlock revolver. I'm hoping to do some greenstuff work on this dude (sort of shawl/hood thing around his upper body?) to really drive home the cultist aesthetic. He's more of a one off for now, although I suppose I do need a new Kill Team...

... then again, I did want to look at doing Khorne or Slaanesh for that.

I've had that kit for like, forever; alongside stuff like the old WHFB Forsaken (which is amazing for conversion fodder). I really wish I'= had used it sooner!

I wasn't too sure on the colour scheme initially, however after seeing the new art for the Sons of Sek in the updated version of the Sabbat book coming this December, I think I'll be doing a scheme similar to them. 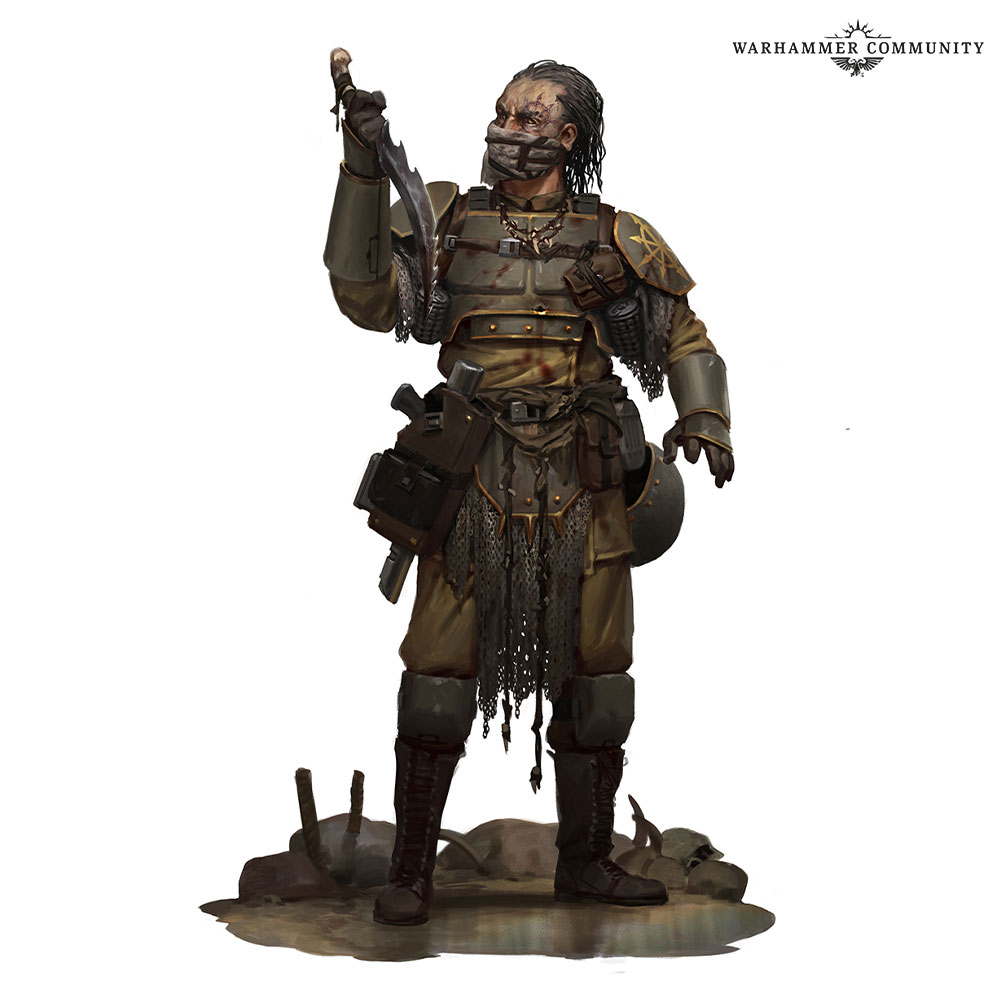 Nothing to throw up this week, beyond this little tease...

Good :cuss! Keep it up

"Nothing wrong with having a bit of pride, brother." - xarl

Really good looking traitor guard models, hope there is an update coming in the near future!

Give up yourself to the Great Gods in body and of soul, Discard all that does not benefit their Greatness. The first thing to be discarded is the Name. Yourself is nothing to the Gods, and your Name shall be as nothing to You. Only once you have reached Enlightenment shall you reclaim your Name, and yourself. Thus spoke Great Lorgar, and thus it was to Be.

- fourth tenant of the Book of Lorgar

Hell, it's been a while since I posted hasn't it? Between work and a new baby nephew being added to the family I haven't really had the time to do much in the way of hobbying. Thankfully, everything does seem to be clearing up again, so I can get back to fiddling around with all the boxes that I've picked up over the last six months or so. 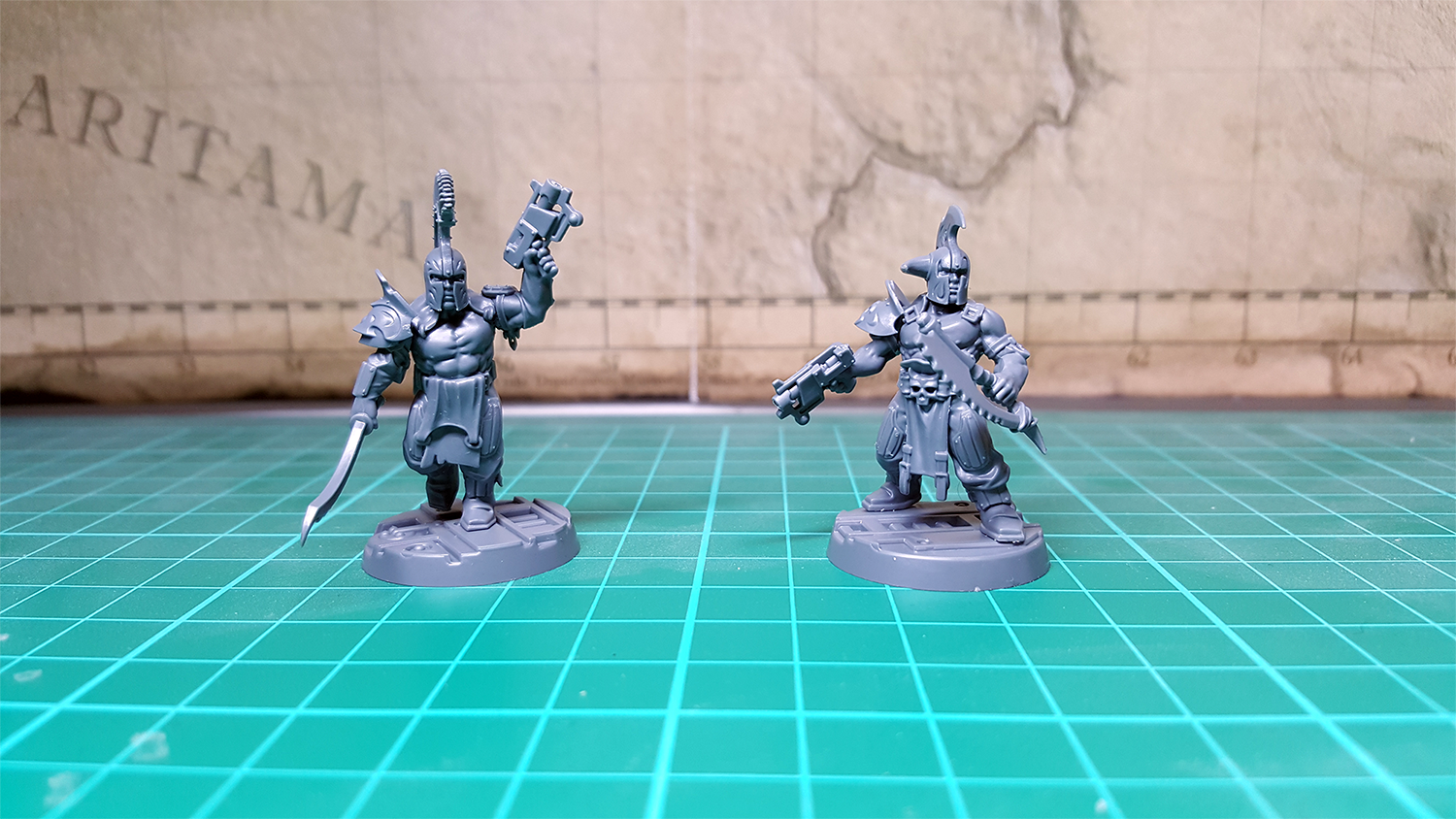 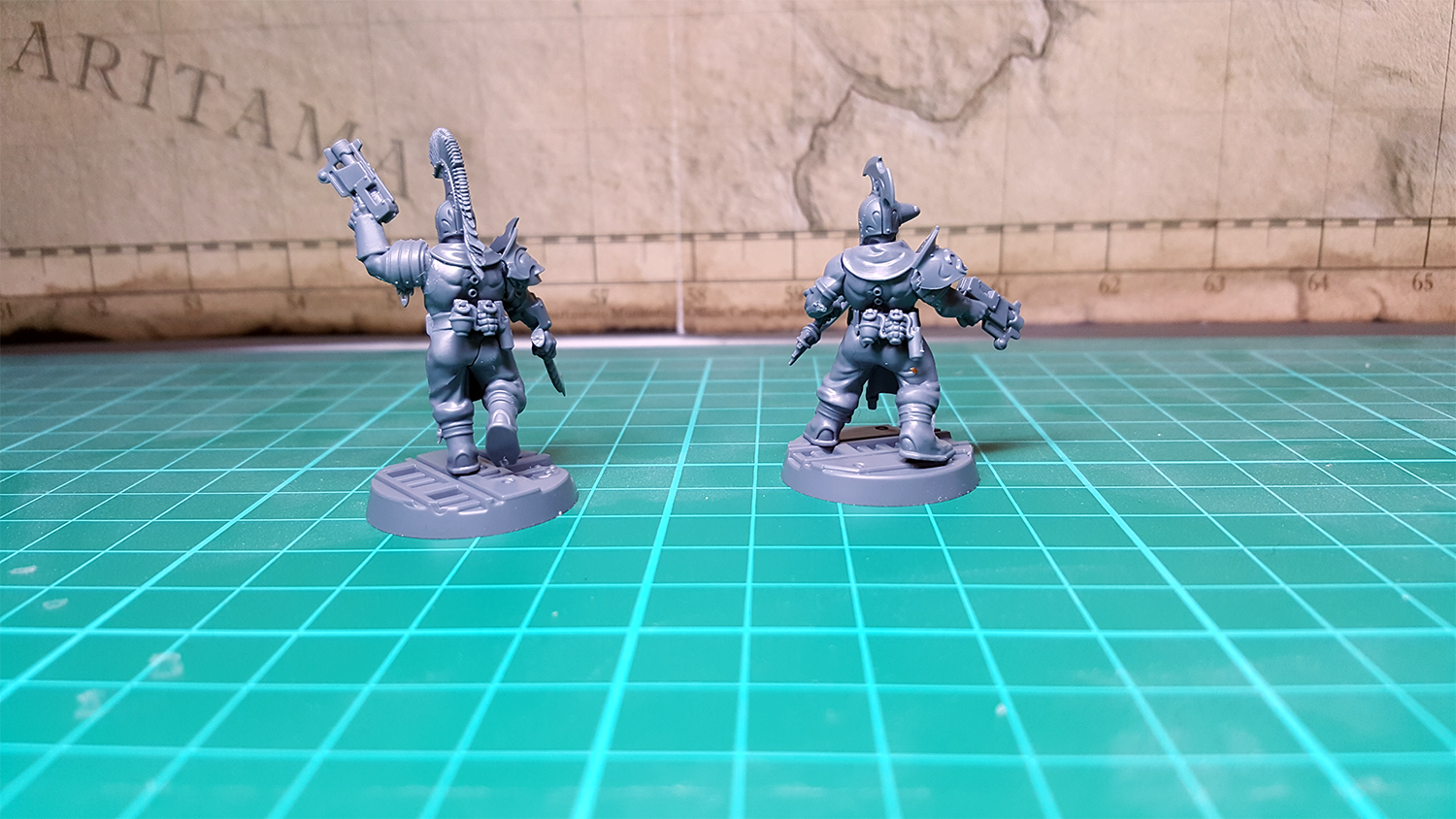 Kicking off the thread again, here's a pair of Slaaneshi Cultists from my as-of-yet unnamed, un-backstoried warband. When I first saw the new Corpse Grinder Cult for Necromunda I knew they'd be perfect for use as a wee Slaaneshi cult with minimal conversions, although I've had a few ideas since for some increasingly wacky and/or mutated chappies using pieces from the Daemonettes of Slaanesh kit, amongst other things. As with the Enforcer conversion that's still languishing in a case somewhere, the heads were sourced using bits from the Hellstriders of Slaanesh kit.

I'm hoping to have some more stuff up early next week. Until then, peace! \o

Thank you Kolgrim, and apologies for the slow response!

I've been chewing away at another test miniature recently to see whether or not it's feasible; a Thunder Warrior, a legendary warrior of the Unification Wars. I really wanted to try and capture a low-tech, barbaric feel in the early power armour, which led to me mixing and matching pieces from a variety of kits, such as the legs and head from the Corpse Grinder Cults, the torso and arms from the Mighty Skullcrushers, the axe-head from the Goliath Stimmers & Forge-born, as well as a few leftover pieces from my Mark III and IV Space Marine boxes, and a top-knot from Shadowspear.

That said, he isn't quite done yet! I've got some extra pouches, spikes and furs to come; hopefully I'll be able to come up with a suitably low-tech looking las-weapon for him to carry too! 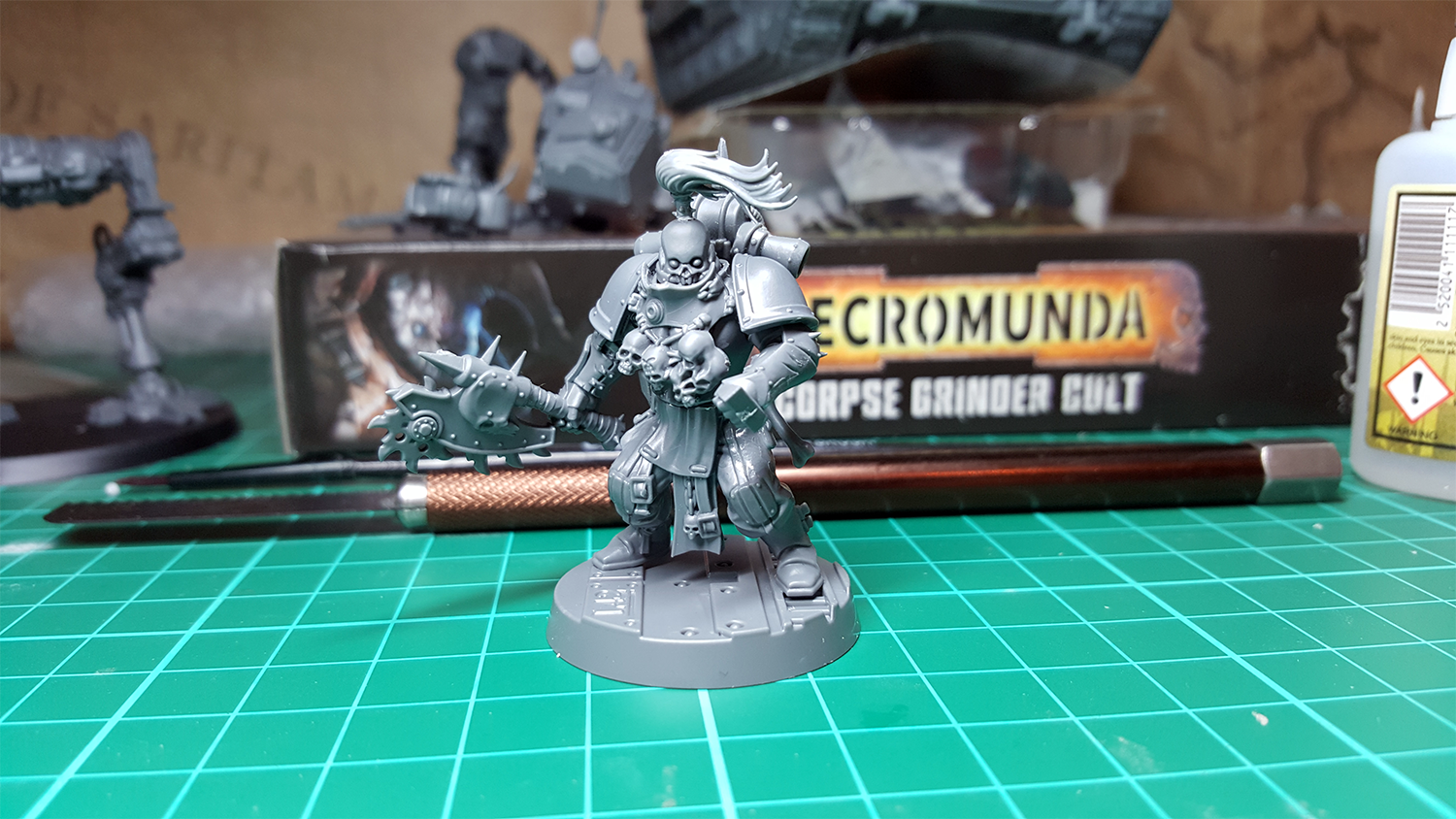 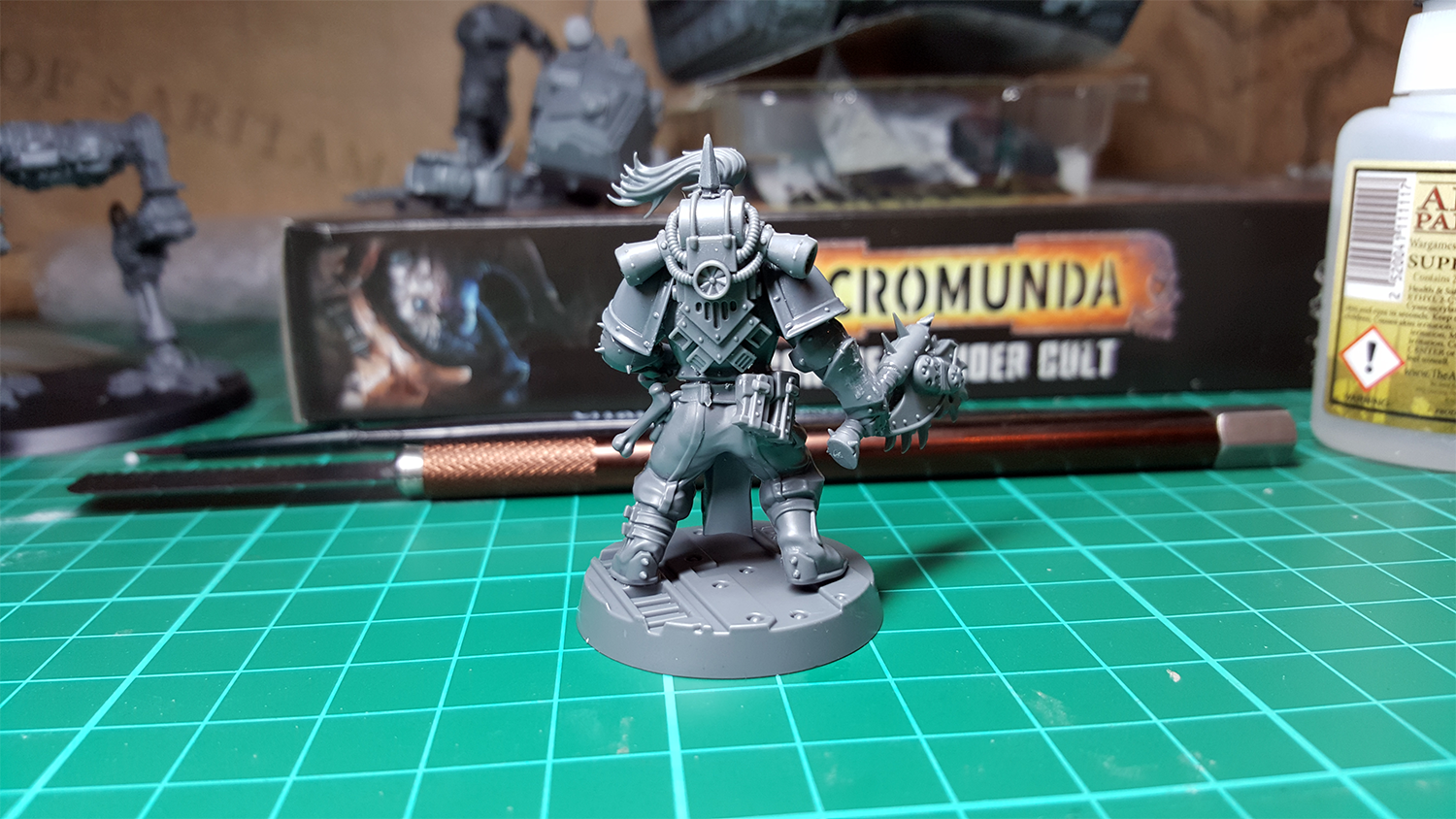 Also, if you get the chance, please feel free to subscribe to my Instagram! I'll be endeavoring to post more hobby related updates on there from now on as well!

That’s a great looking Thunder Warrior! How does he stack up size-wise compared to Marines?

Also tagged with one or more of these keywords: Isinfier, Conversion, Space Marines, Chaos, Traitor Guard, Renegades and Heretics, Lost and the Damned