"To be a king and wear a crown is a thing more glorious to them that see it than it is pleasant to them that bear it."

Elizabeth I, Queen of England

"We will not attempt any alliances with kings"

"...from my investigation, I can only see one truth, as difficult to accept as it is: the Freeblade Questoris know as the Skull Knight, King Crimson,  Old King, Knight of the Death Rose and Rosa Mortis among other names, has not gone rogue, nor mad.

The Knight has a pattern, a plan I may say, in its seemingly random acts.

Unrequested support of Imperial forces, usually seen as miraculous apparition of a God of Death by guardsman, have saved lots of lives...still I can confirm reports of the Knight side with the forces of Chaos and Renegades.

The "Skull King" seems to have no known base, but operates in some known subsystems, and his acts of heroism and treachery can only have one meaning in my opinion.

He is protecting something, somewhere, a hidden system I think

This is where I'm headed for."

Excerpt from one of the last letters

Knights are fantastic kits, and they deserve, in my opinion, long projects and dedication.

So I started my first Knight project, inspired by KrautScientst Gilgamesh and Tibbs Queen Bee, not aiming at the same results, as it would be frankly impossible, but simply to do my best with my current set of skills.

I started first to work on a background, taking bits from a lot of Ideas I found or created (mangas, history, 40k fluff, previous projects backgrounds and role play campaigns); after all making models is telling a story.

I aimed for a difficult task: a knight I could use with my forces, where they Imperial or Chaos. I wanted a Knight you could look at and ask "Is it loyal or traitor?".

There is not so much room for grays in the grim darkness of the far future, even aesthetically, but I manage to have something to work on.

Skull was my first thought as a unifying theme. Spikes, but small, not too pointy and arranged in a certain way. 30K aesthetic helped a lot!

Then I remembered this guy.

A lot of you probably recognized the Skull Knight from Miura's "let's hope he finishes it before dying" BERSERK.

He got everything I wanted from an inspirational view. Knightly, Mysterious, Noble, Damned, Spooky and obviously very Skully!

With that dangerous, evil but not monstrous look, spikes, skull, the rose heraldry on the shield...all seemed perfect to me.

The ghostly appearance fitted greatly with the looks and fluff I wanted, after all we have precedents as knights goes (Gerantius anyone?)

So, full with Ideas I started with mounting the knight with LOTS of TAC

(not the final pose, but cool)
An then set sail for Convertiland...
I have no time for now to cover the process already done, but I plan to do so, I just leave you with pictures of already done stuff and little explaination
First thing fist I wanted a full skull face

I mean a greenstuff crown

Still to be trimmed in this picture

Then I needed to do something with the pauldrons

I settled for this

I put some skulls 'cause why not? they are the previous nobles, reciving the honor of be buried in their own war engine. Seems appropriate

So this is how my knight looks like now, save for the :cussty picture

Last it needed heraldry. This was an adventure in itself and a long story I will gladly tell you if you manage to follow me in this WIP log

The Rosa Mortis
So it's all for now! hope you like it!
Filippo
P.S. Yes, I plan to give my knight some kind of cape too!

That's beautiful work. Will you later add Guts and/or Casca to your army?

Thanks!
I will probably at least pay a homage to them on the base

I am strongly in doubt for the knight "breastplate" (the plate with the scroll under the head)
I can leave it as it is, just adding something
Or
Add some spikes as vertical elements as in the skull knigt armor
Or
Go all in with a naked woman spreading wings as the skull knight horse brestplate...could be hard but not impssible to find the bits for that
(As I posted I realized that in the drawing I used it is not possible to see..that is probably for the better as you know...breast...
You can easely find some images on the internet!)

For the breastplate, I think a rib cage is most appropriate. Say the "ribs" are components for an archeotech shield generator (improve his Invulnerable Save) or a high-output reactor's cooling system (improve his Strength)...

Yeah, the ribcage is actually a good option... Still, I have seen it in some third part conversion kit and in a way it seems to me a little waste, because the chest area of a knight is someway hidden, so you need to do something minimal or something very evident, in my opinion

My fear is that the ribcage will pass unobserved and, when seen, do not manage to get the "wow factor" I want, as opposed to something more complex as the woman figure...

Ok, I post an image where the Skull Knight horse's breastplate is seen

If any Admin has a problem with it, i will remove it instantly 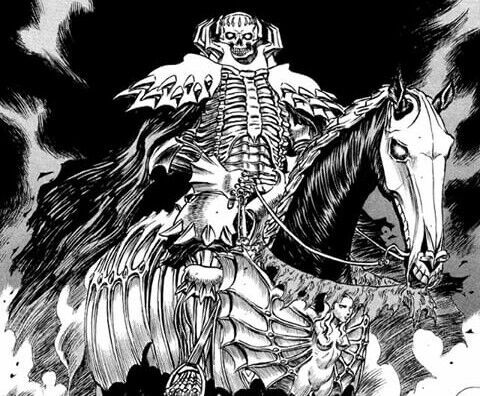 See? I like a lot that figurehead look, even if I would probably go a bit less "anatomical" there.

It should be really difficult to do something good given the small space, but this entire project is a test of my skills, so...

As I did not made up my mind yet, for now I will focus on the upper part.

But first, in following posts, I want to talk a little about the mask and the rose heraldry on the shield

Seraph emerged from  the wreckage of his chimera only to fine himself surrounded by the ruins of the building on which it landed...

Sweet Emperor, he thought he would have died.

Instead, the Skull Knight, his supposed "prey" had trowed his entire vehicle out of the battle before disposing off the rest of the "hunting party".

He has been a fool, he thought , as the engine stopped in front of him, his crimson eyes glowing.

Then from the mist a small figure descended, a gun in his arms.

She had no skin on her face...no, it was just a skull mask

"I am Baroness Ametista Malaluna Von Neumann" she interrupted, lifting her mask; then in a caring voice "Are you hurt?"

She shoot him with the stun-gun. Twice.

Pilot! I am one of those that Do not consider a Knight fully done without a proper pilot! My kit is an old one, but I got plans for the driver for two years, taking the seat from a sromraven (do not ask how..oh, actually, feel free to ask, but the answer will be "Painfully and Dangerosly".
My pilot model and idea has changed greatly and so meet Ametista

Yes, she has no face. She well have a skull mask as soon as possible, this is just an early wip

Things than I am very happy with are her left hand, her hair that suggest some strange energy in the cockpit and how the parts combine in a unique look...I challenge you to find out where the bits came from (HINT: everything is from GW)

I am not too sold on the boobplate, but I need it to show that she's a she

Tell me what you think of her

Meanwhile I still think about my possible figurehead...and also about spikes

The female Knight Scion is a good touch. As she carries a stun-gun to defend herself when dismounted (instead of the expected pistol), will you build a gun locker or miniature armory into the Knight? A gun rack behind the Throne Mechanicum? Greaves (lower leg armor) that open up to reveal a long-las, shotgun, boltgun, and/or other weapons secured in their hidden racks?

Great project! - really like that they are a true 'freeblade' and therefore unaligned as traitor/renegade or loyalist.

The inspiration/ theming brings a dark fantasy mix to the sci-fi world of 40k (but then again so does the whole concept of knights)..

it reminds me of Leoric from Diablo and the wild hunt from the witcher who i always had a soft spot for.. so many great Skeleton king's to work with!

The Rosa Mortis is a nice funerary touch - will it be a velvety black (ref: Knight of the Black Rose) or bright red?

Berserk is a great place to draw inspiration from.

Berserk is a great place to draw inspiration from.

Also tagged with one or more of these keywords: imperial knight, not sure if loyal, Skull Knight, conversion, long project