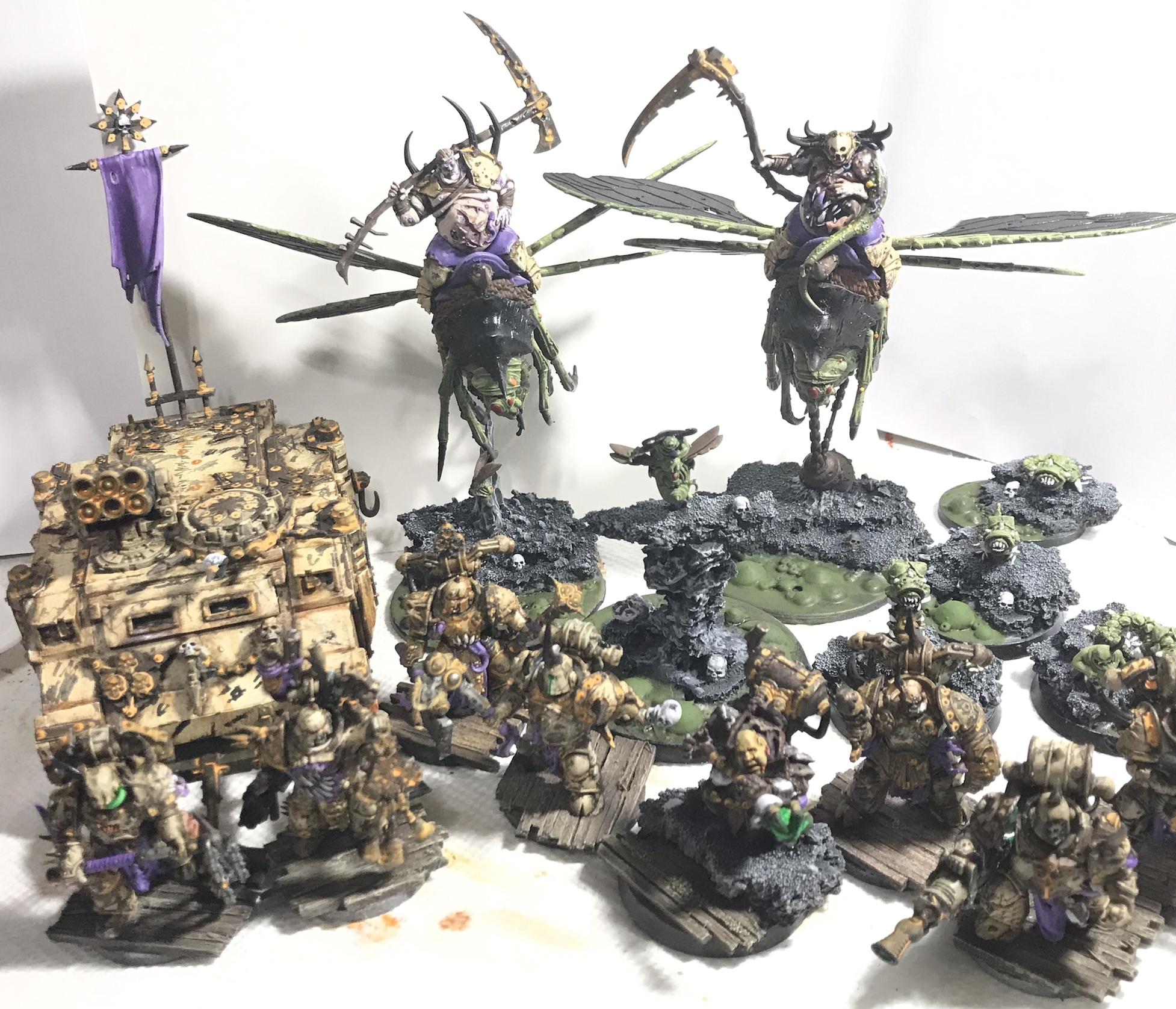 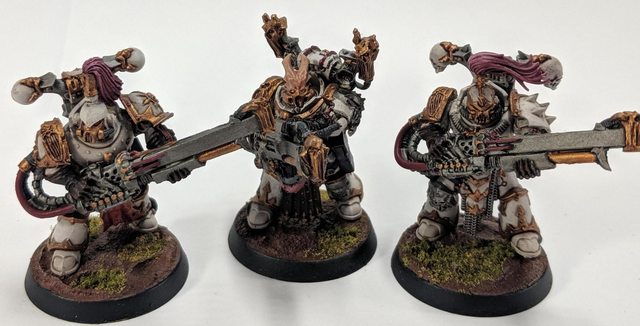 Not one of the easier paint schemes I've attempted, but it is damn satisfying to look at now that it's done. And yeah, those Noise Marine arms still hold up fairly well.

I know my next project will be 10 Berzerkers with the new sculpts, but I highly doubt I'll be able to get them all together in time for a vow. Hope you all enjoy, and happy painting.

I leave the room for a minute, and there is finished vows incoming like no tomorrow... awesome!

Great work everybody! There are almost two full months of ETL left, so if you are confident in getting another vow done: please consider re-vowing.

A great wave of completions!

Keep it up guys, you have the numerical advantage but that can be a curse as much as a blessing!

@MaliGn dam, that is one crazy looking obliterator. Cant wait to see whats next!
@iron daemon forge, what ratios are you using in the spray bottle roughly?


Thanks guys, I've started to get the basecoats down on the next vow, early days yet mind...

Awesome. Those are some serious quality vows coming through! Great work.

The Alpha Legion are properly underway along with a Venomcrawler from the Forge Fanes of Incaladion! Had a backlog I needed to finish for an Apocalypse match last weekend, but now it's full steam ahead!

I tremblant rise to the challenge of E TENEBRAE LUX on the side of the Chaos Space Marines and vow to complete of total value 716 total points’ value of the vow here on or before September 1st, 2019. Success will bring me eternal glory and failure will doom me to wear the Badge of the Oathbreaker until the year-end 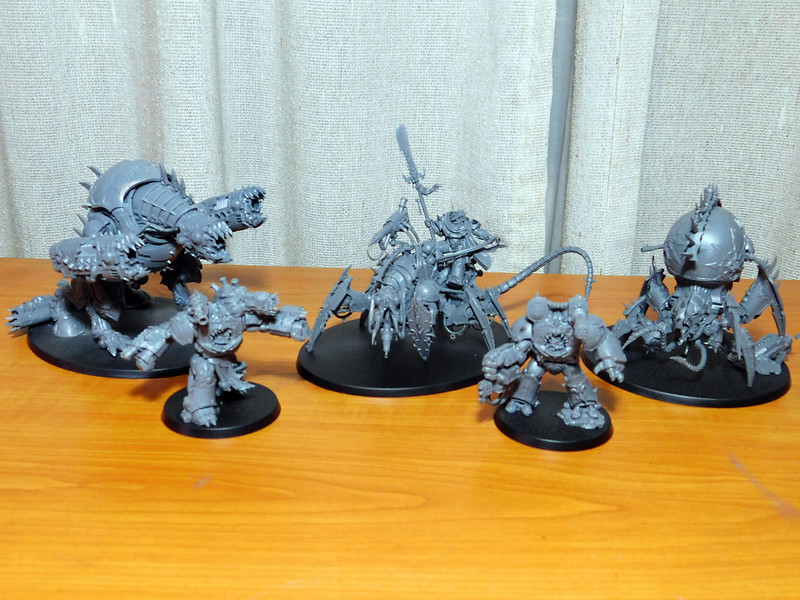 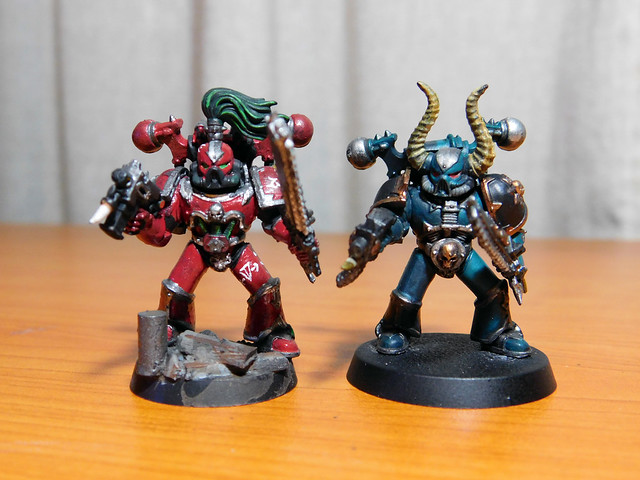 First ever vow complete, I give you Vrosh Tattersoul, Exalted Champion of the Crimson Slaughter.

I will have to have a look through my stuff to find something suitably manageable for a second vow this weekend.

Some of you guys are animals on here! Such quality and quantity at a good pace! I had alot of overtime at work and 3 weddings to go to last month, not to mention back surgery in March that makes sitting for long periods of time Unbearable. Trying to take @darnoks suggested strategy of trying for atleast 15 min a day. I used to hate basing and loved painting, now I love basing and find painting can be tedious.

Keep up the good work fella's!

I, Dasanaman017, rise again to the challenge of E TENEBRAE LUX on the side of Chaos and vow to complete:

of total value 440 points on or before September 1st, 2019. Success will bring eternal glory to the Sons of Magnus and failure will doom me to wear the Badge of the Oathbreaker until the year-end.

OK so for vow 2 I am going to try out some batch painting with the contrast range, see how quickly I can get through a bunch of models.

I Am Forsaken vows to rise to the challenge of the E Tenebrae Lux in the name of the Crimson Slaughter Chaos Space Marines and complete the models below before September 1st. Should I fail, may the voices in my head taunt me as an Oathbreaker for the coming year.

Excellent: completions and re-vowing, that how to do it!

And I saw some Spawns there - they should enter the Beauty Pageant!

Excellent: completions and re-vowing, that how to do it!

And I saw some Spawns there - they should enter the Beauty Pageant!

Here's today's WIP on the cultists

So are those Cultists done purely with Contrasts?

Work progresses slowly on my vow, been knocking out bits of trim here and there this week. I've either been too tired from work, too hot or both to get a proper session in.

Good looking cultists there! Other than the bases (and maybe some more detail work on the champion) I'd consider these finished.

All contrast except for drybrushing with very old boltgun metal and agrax earthshade wash on the guns, and some slight touchups on the skin and the red cloth.

Going to smash out the other 15 before I do the final details like the scars and tattoos on all of them.

Great to see the completions starting to come in, well done all!

I'm nearly there myself, a couple of freehand details to add and a bit of agrellan earth slapped on the bases and I'm there. Don't think I'll get them in for this week's update, but should definitely be done for week 6!

+++THIS IS THE CUT-OFF POINT FOR THE FIFTH WEEKLY UPDATE+++

Just show some work in progress.  With way thing are working out in RL, I think it be first week August until I get vow 1 complete as I need to buy the two Predators then.  Was mean to past few weeks, but money been needed for a few other stuff that the moment.

Since this photo, the Predators has been painted.  But waiting until transfer & weather powder before posting the finish model.

Two Thousand Sons Rhinos.  I've got Friday off, so aim the afternoon to get the spike sorted & ready for undercoating.

Third Thousand Sons Rhino that get built some point during the week.

Second Iron Warrior Rhino that I'm current working out & try sort out a few parts.  Like trying to get the open hand from the Primaris Blood Angel Lt model.  I think trophy wise there will be a Novamarine, Red Scorpian, Alpha Legion, World Eater & Ork that I would like to add right away.  Rest I'll be looking that passed events to see what will fit for the unit be transport.  Crusifed Marine will be Ultramarines.

Iron Warriors Heldrake, 2x Maulerfiend & Land Raider.  These are been painted for a friend & need to get done pretty soon.  So hopeful have them complete by tomorrow.

Got Friday off.  Main one to try to get my World Eater Biker built.  They not have base done until August.  I also get the Thousand Sons Rhinos sorted.

Then Sunday been spent getting a friend Black Legion force built & they will get painted during the rest of this month.  There needed for the start of August for a event.

It just the 2x Predators, Cypher & Fallen Angel Lord.  Also the Exalted Sorcerer, got parts to convert up one for the moment.  But the second needed to wait until August  Cypher sitting there & get painted as he also for my friend Black Legion force.  Aim for a vow 2 for the new Chaos Knight once this lot complete.  Then Vow 3 will be a squad of Iron Warriors.  Vow 4 for a Plague Marine Lord.  Time permitting another 5-10 Chaos Marines by last week of ETL as I'm needing to get my Iron Warriors ready for a few important games I've got planned in September,

It just been the 2x Predators that been push.  Any time I've planned to get them, something came up where the money needed else where.  Hobby money I'll have by next week is going toward to new Chaos Knight release.

I, Eldrick Shadowblade, rise to the challenge of the E TENEBRAE LUX for a second wave of reinforcements in the name of Lord Kraven Thrice-Cursed, Master of the Oath-Broken and vow to complete:

11 Cultists 1 with flamer and mark of Slaanesh

Not sure what the updated points are if someone could give me a hand. I'm going to knock these out in 1 week is my goal! I'll need their might to summon vow #3.... 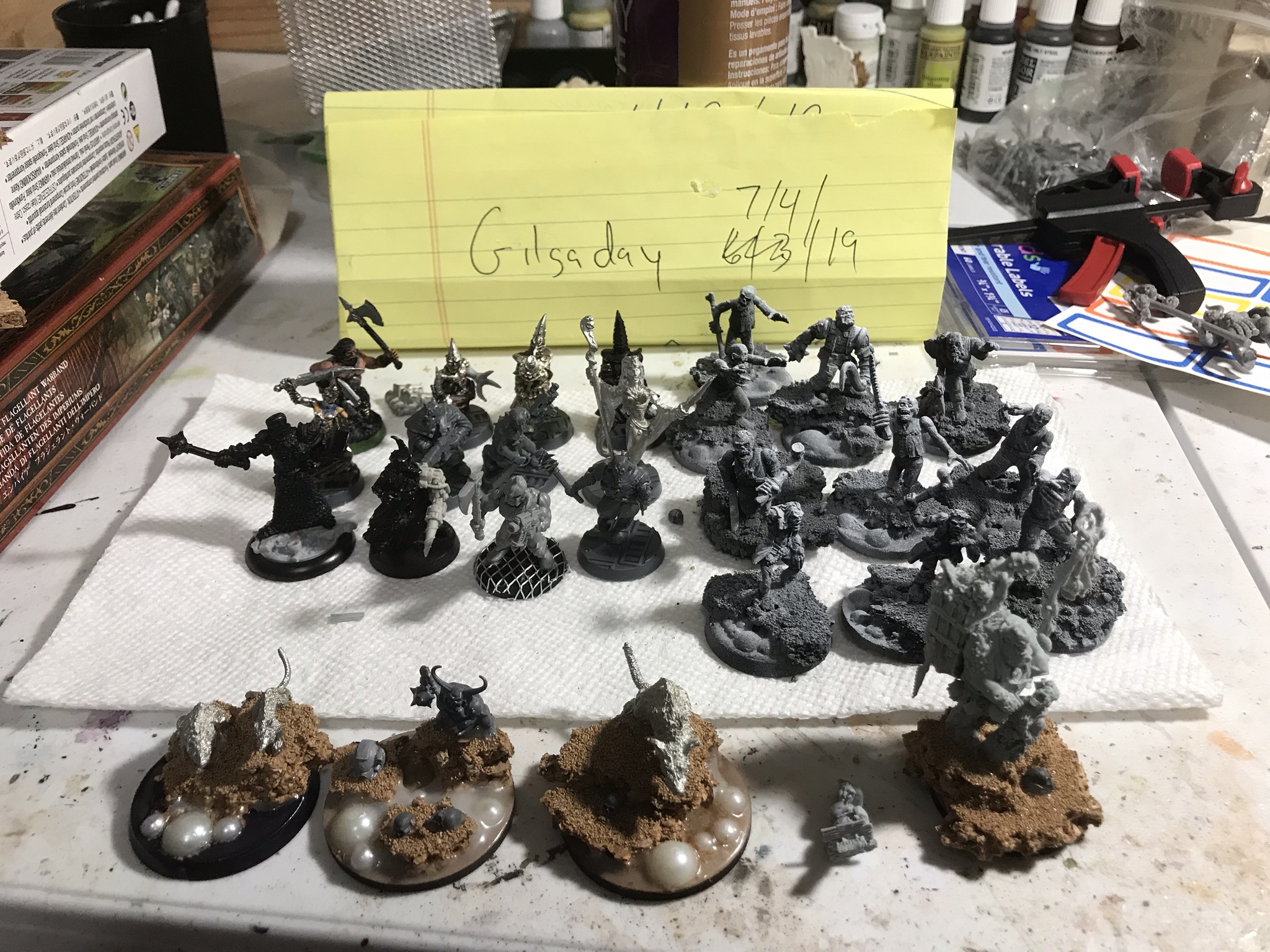 Quicker than I thought...

(Will add more pics to my WIP thread)

11 Cultists 1 with flamer and mark of Slaanesh 61 points

No idea of the Heralds points, but he is not a legal choice for CSM anyway. What is the Exalted Sorcerer equipped with?