So very close to done. so very very close.  And the white scar is just about done, as is his little pet. Should be finished (and all posted on this one) tonight... with any luck.

White Scars Praetor got finished too, and his psychic familiar.

Thanks Altis, I'll admit I'm happy with how it all turned out but it ain't perfect so, eventually, I'm gonna go tidy some bits up.  But, with Lord Lupercal and the White Scars adviser, I may call this vow...

And it won't be my last vow.  There might be a bit of a preview on what will be coming up.

That is the BEST Horus I've ever seen! Especially that head... Vykes, you are an artist! Congratulations and looking forward for your next one.

BTW, It's high time we see some first vow completions here... Any progress to report by anyone?

That's a beautiful horus, Vykes. I took one in on commission a while ago, I think I did him justice, but yours blows mine out of the water. Well done man.

Ah thanks a ton, you two.  It means a lot, especially as white always spooks me just a little bit, even now.  StatusJoe, my dude, you got a picture of that one around?  Always love seeing the big man done up.  I always like seeing characters done up, there's always inspiration in it*. You and the corpse worshiping lot sure are tearing up the track in general, but seriously you lot are doin' great....

-tilts head and slowly looks at the rest of the Warmaster's pack- you hear that ya' lot, the Loyalists are doing REEAAAAAALLY well.  We might need to do something about that.  Like, offer them something more than gribbly space magic.

*-sighs a bit- I'm considering Horus in green with a completely different weapon... for funsies, and kicks, and due to some unmentional story thing I hath seen.

Vykes, man. You're a machine. No idea how you do it, but your stuff is just great. Well done!

My Plog - Tales of a Lazy Hobbyist

Lord, the Mechanicum insists that work progresses as fast as possible, and to work any quicker may result catastrophic damage.

Current estimates for completion are in the next week, terran standard. 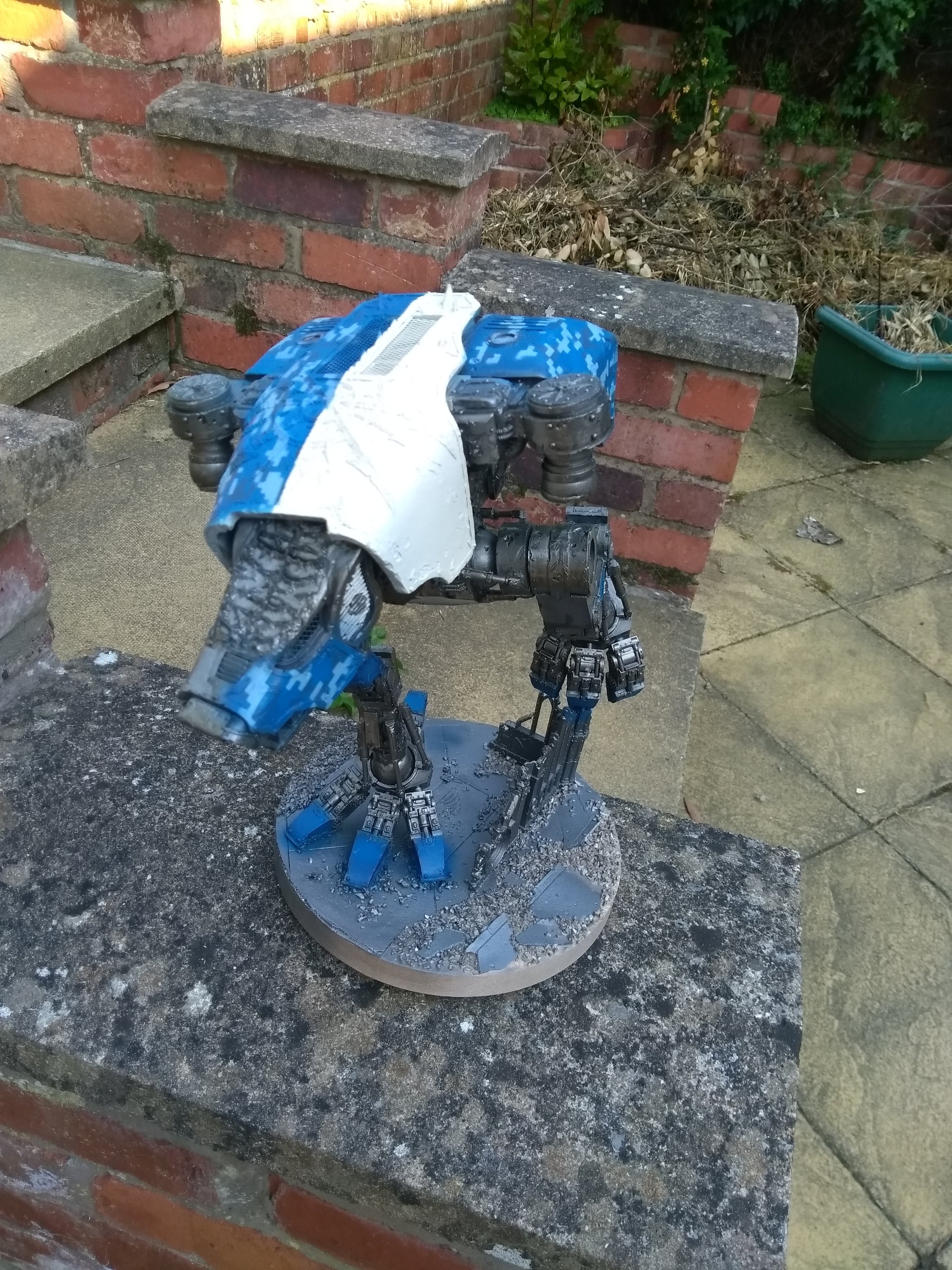 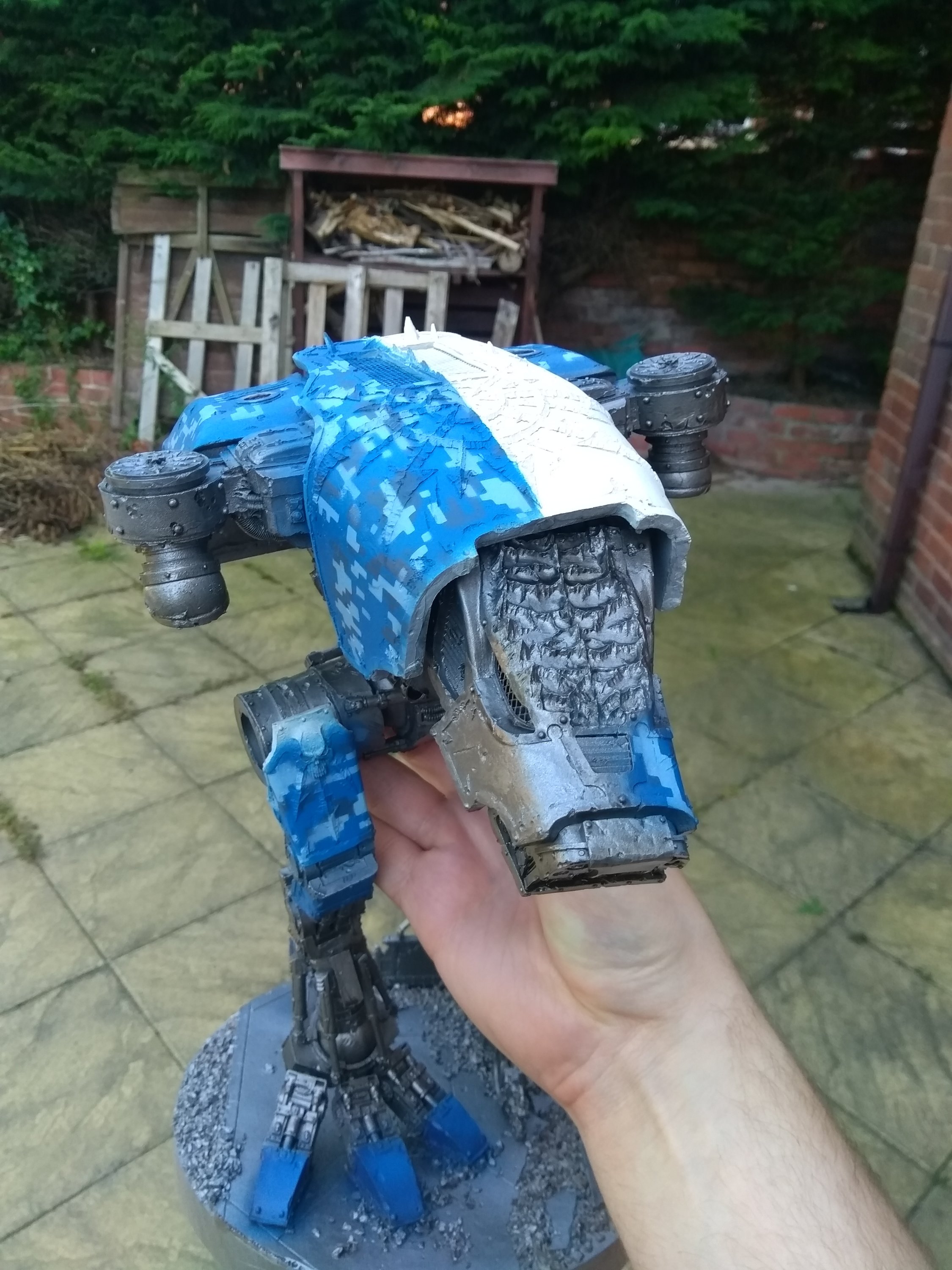 I've not forgotten the knight part of my vow either, work progresses on them as well: 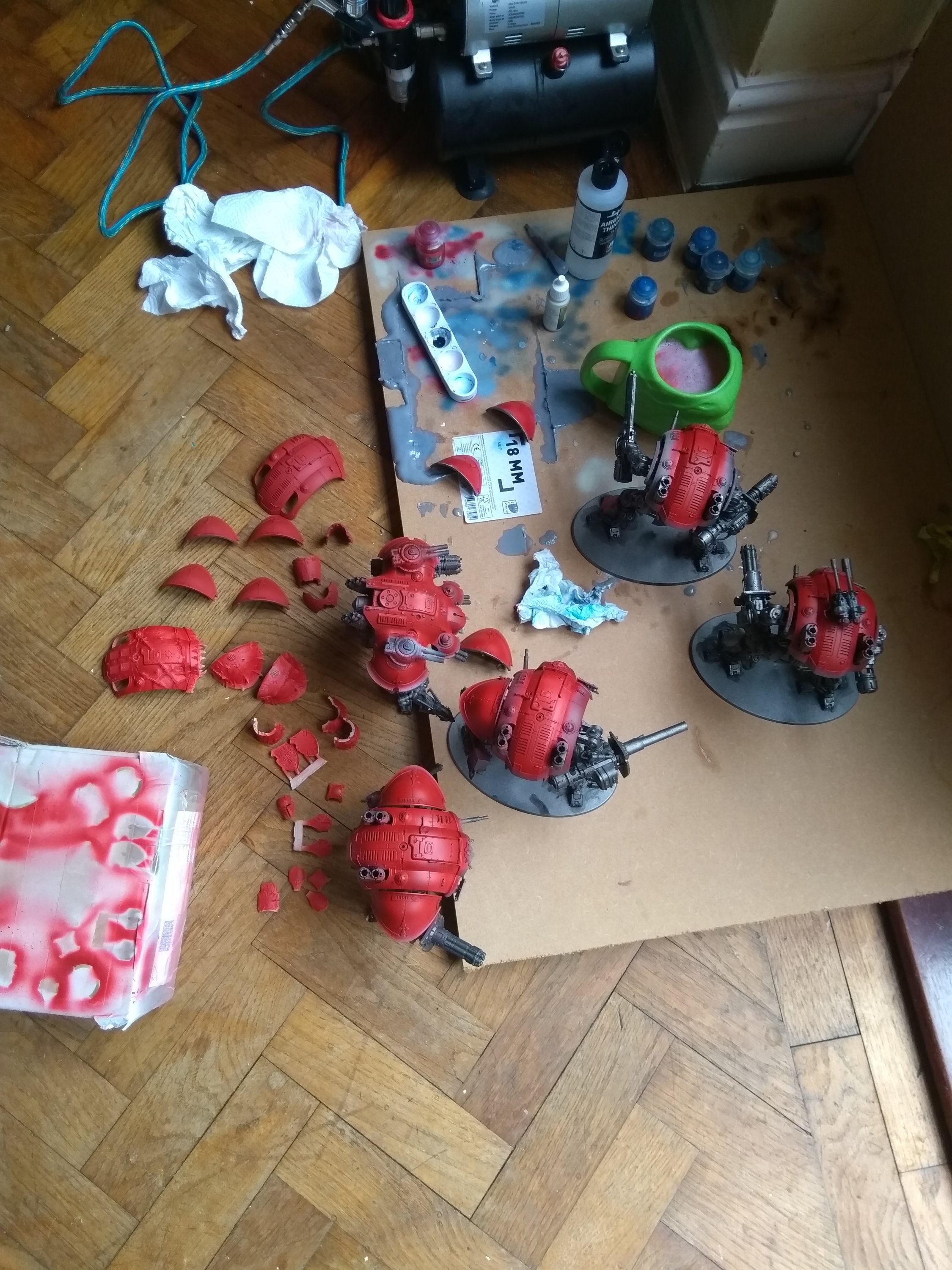 Gotta say actually, contrast paints in an airbrush is fantastic!

+++THIS IS THE CUT-OFF POINT FOR THE NINTH WEEKLY UPDATE+++

Waaaaait wait wait, Altis, you telling me that Contrasts can get put through an airbrush?  That's all everyone was saying they can't do, and the patriot 105 I have is a pretty beefy big-boned needled sort that can handle thicker mixtures (My Khrome renegade, uh, can't).

-stares blankly- I may have to try some things very soon.

The red you see on those knights is blood angels contrast, straight from the pot, no thinning.

The colour you end up with is very much dependent on the undercoat, so for example I had sprayed leadbelcher on the knights and found I was getting a dark metallic red. But from what I've read that's fairly standard with contrast.

So I sprayed an undercoat of bone over the panels and reapplied the contrast over that once dried, and I'm really happy with the result. Vivid red, nice even coat, and no need to thin.

I'm a complete amateur when it comes to airbrushing, but I found it quick and easy with the contrast.

I'll be trying the templar black contrast in the airbrush tomorrow, so I can show you the result if you like?

Vykes - It wasn’t that contrasts can’t be used with an airbrush. It makes them work more like a clear/tint instead of getting the contrast effect you would with a brush.

That'd be great Altis, love to see how the black would look (I typically use either an ink or Minitaire Oil Discharge as my usual transparent black)

Hmm, honestly Shard of Magnus, I kinda wonder if a quick brush then air spray over would get both effects so you aren't left with any brush streaks and you still get the volume needed with contrast. That... yeah that's worth a test for me.

Here you go, Vykes: since you asked for him. I did this commission back in May, (The 1ksons in the background are a commission as well, and a White Scar pledged in my first vow) Like I said, not quite as good as yours, but I think I did him justice for a four hour job.

Satusjoe, it's rocking.  Definitely got that balance between the miniature and the base while the Black and bronzy gold gives it that 'Psuedo Black Legion' feel too.  And for that time frame it's even more impressive (Not gonna lie I probably spent about 4 hours on the face for Horus and 4-5 hours on the body plus drying time... the body I knew what I was doing as this is actually my third Lupercal and second for myself, one went to the local 30K club for a Siege thing.  The face, well, I was toying with inks and such so time didn't matter too much.  Then some more time on the base, probably 2 more while on this Horus I did it with a batch of the other Luna wolves loooong long ago.  There was planning in it... I didn't notice that it had a helmet until I actually set the figure down and thought, "Wait, Horus never wears a helmet... hah, score").

See, primarch can be done in 4-12 hours.  We need more here, mooooore -goes back to staring at Magnus-

Chances are, I'm going to pick up another Guilliman as it's been over a year since I painted mine, and my style has changed a bit in the time since.

See, primarch can be done in 4-12 hours. We need more here, mooooore -goes back to staring at Magnus-


Ha! That doesn’t include the 6+ hours of staring at it while you try to figure out what you’re doing or if you’ve messed it all up. I got called away on a business trip and don’t have access to grab any pictures. Lorgar is done, minus face tattoos as my hands aren’t steady enough right now and redoing the head once was enough punishment. Rest of my vow still needs some work before I’m ready to call things done. Probably won’t be home with enough time to do that until after the next cutoff but will see what what is possible.

And then I’ll probably do something crazy like vow Perturabo and see if I can find enough time to start and finish him in one week.

I might have a fourth vow incoming. Just bought a Contemptor and a Quad Launcher Second Hand.

I'm still way slower than I hoped to be, but I should get my vow finished next week. If I find the time I might vow a primarch for the last week.

Until then, here is my finished Triaros.

The Silence below - Dark Mechanicum

Just as a reminder guys, Week 10 Update cut-off will be tomorrow... Any chance we'll see some completions?

+++THIS IS THE CUT-OFF POINT FOR THE TENTH WEEKLY UPDATE+++

I Chaoself rise to the challenge of E TENEBRAE LUX on the side of the Age of Darkness - Traitors Era and vow to completea Thousand Sons Warmonger Consul of a total of 130 Points on or before September 1st, 2019. Success will bring me eternal glory, and failure will doom me to wear the Badge of the Oathbreaker  until the year-end.

I know the picture is bad, but it will get better with some colour on the miniature. 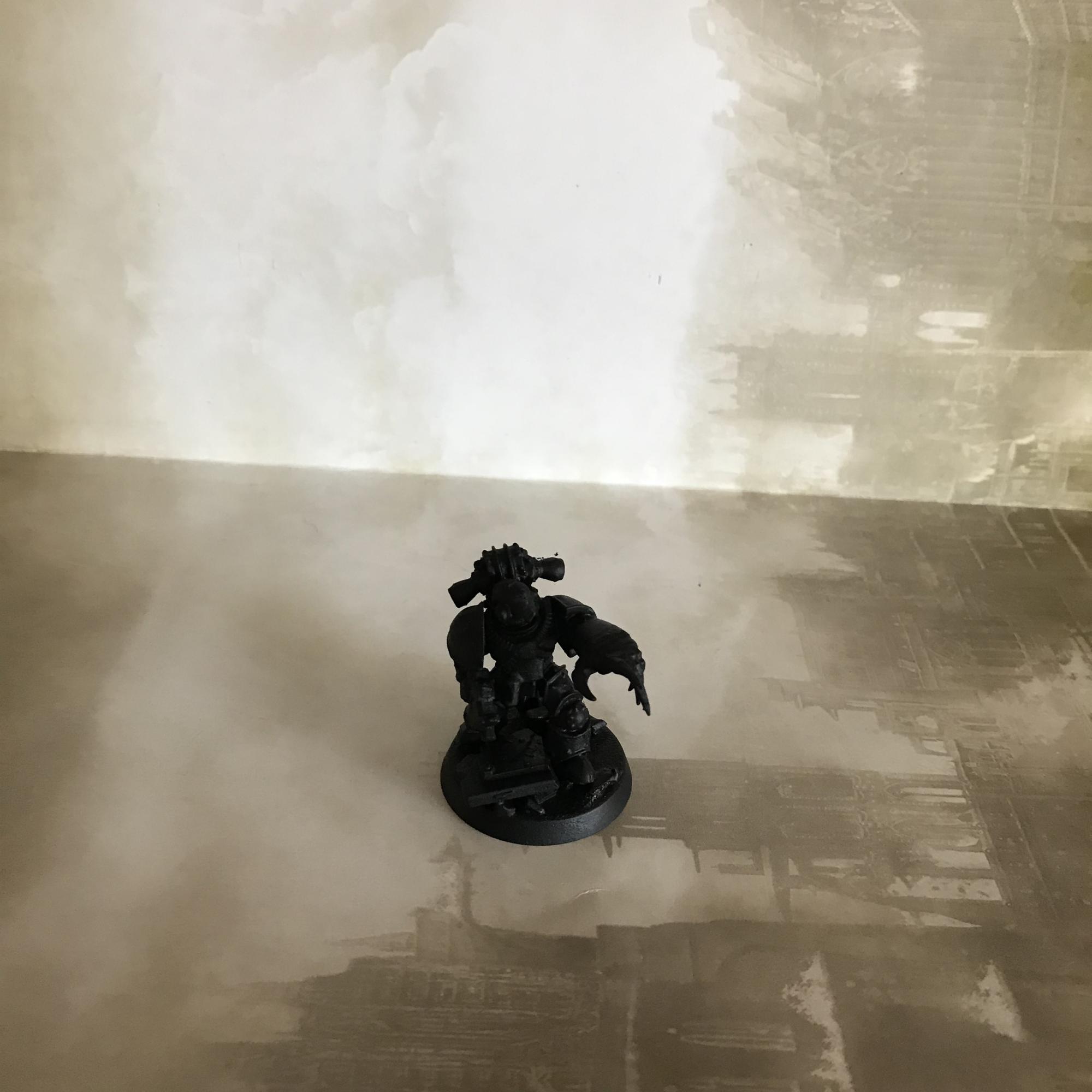 Hello my friends, just wanted to show you I am not ghosting you. Some progress: sergeant nearly done (just varnish, weathering, basing - although it will be a real pain carving him off that 25mm ...). And then 9 more of the blighters!  I am worried about the deadline but painting every day now.

Deliberately going for an old-school terracotta colour. IRL it's more terracotta and very flat/matt. In fact, too flat/matt.

8 user(s) are reading this topic