Hope everyone’s doing okay in lockdown so far, if you’re doing that locally? It’s enabled me to crack on with my Administratum Vow, and I now claim the title Prefect for completing these along with my ruined buildings from a couple of days ago! 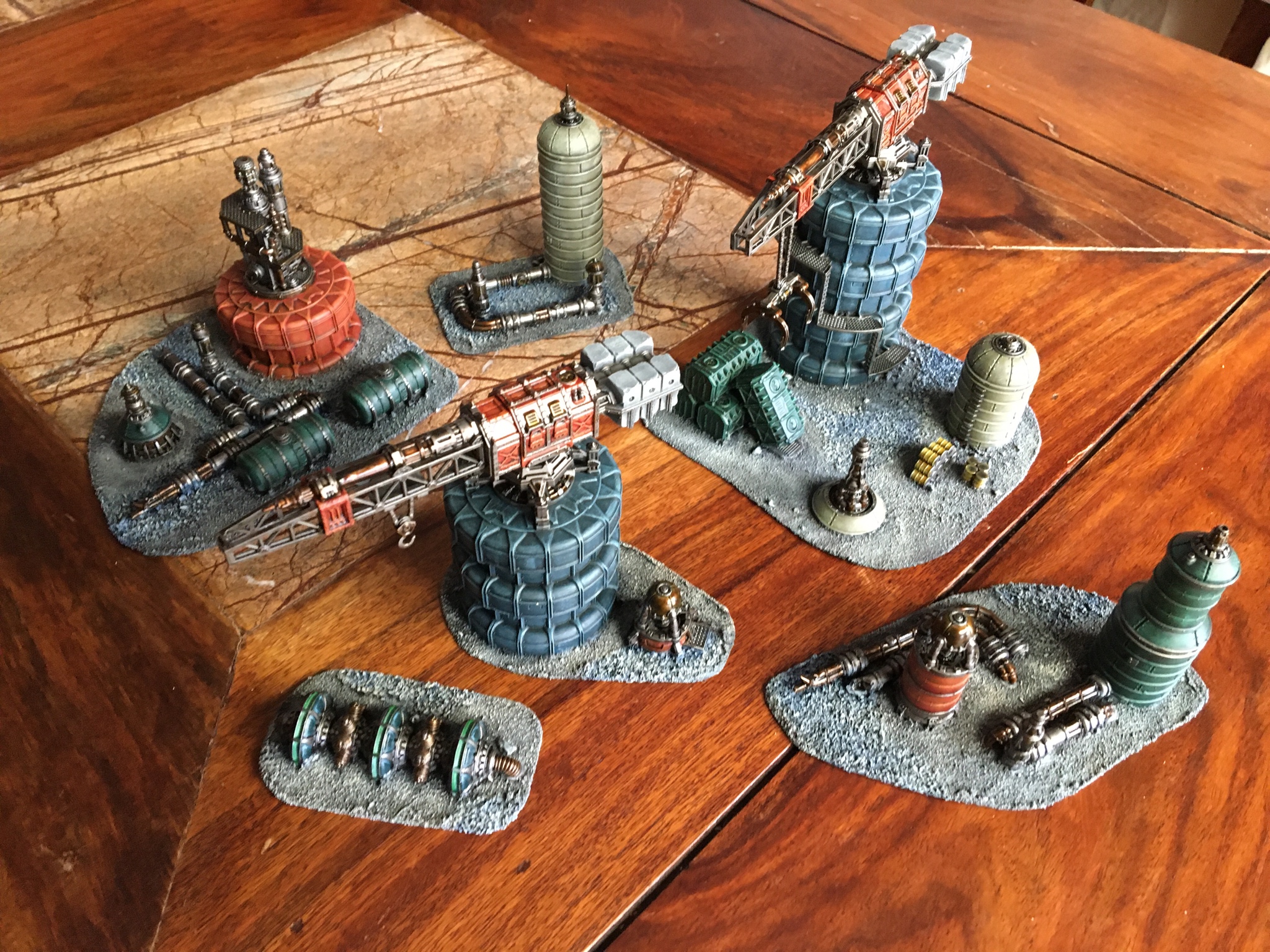 Seei as we still have a few weeks left, I think I’m going to push on and extend my Titanic Pledge to Task 3, Princeps Majoris. Though my fourth and fifth titans won’t make a legal maniple, the numbers are right! First up will be a Fureans Warbringer (name TBC); 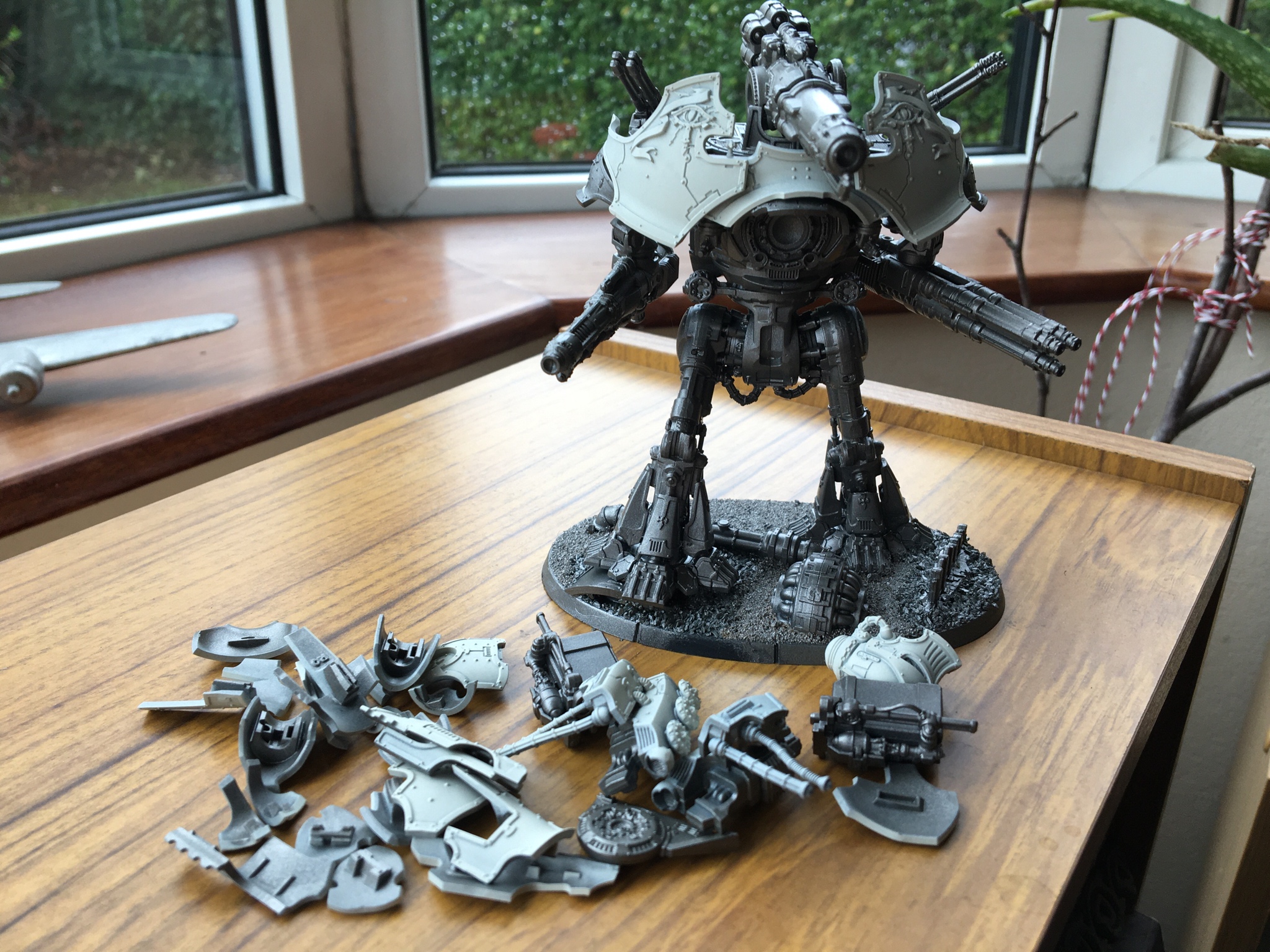 And for my fifth will be an entirely unrelated Ordo Sinister Psi-Titan, (also name TBC) for my loyalists, with an array of right hand and carapace weapon options; 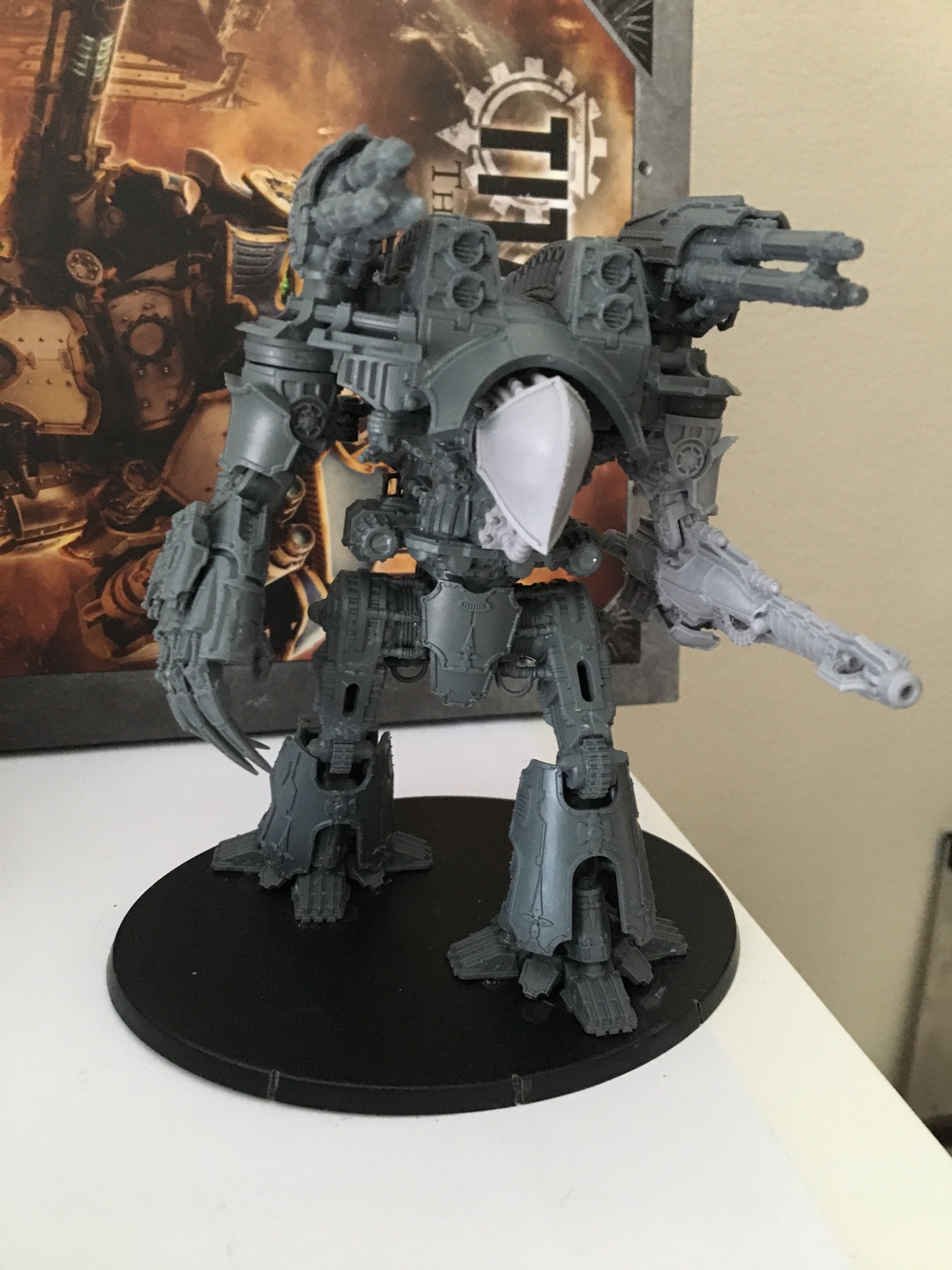 (And yes, I’m going to drill out the barrels on the lasers!)

Contempt for the World walks and my tri-titan vow is complete!

The first Warbringer joins the Ashen Gods, bringing us up to ten painted engines. Put a few guys on the deck, tried out some more damages on the metals and freehanded some stripes. 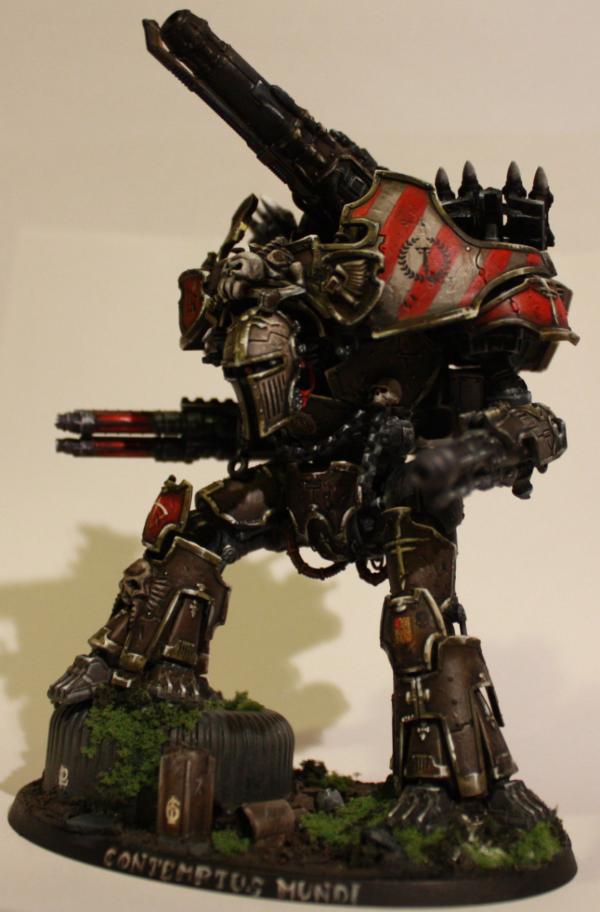 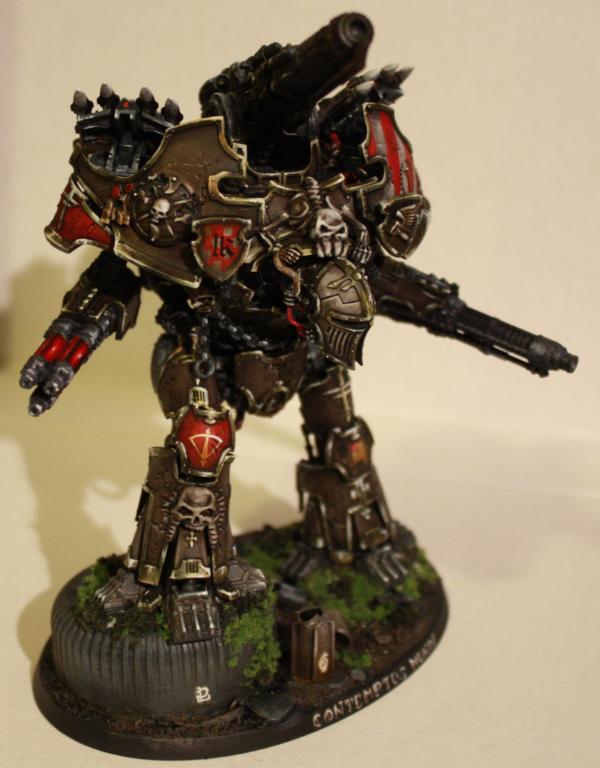 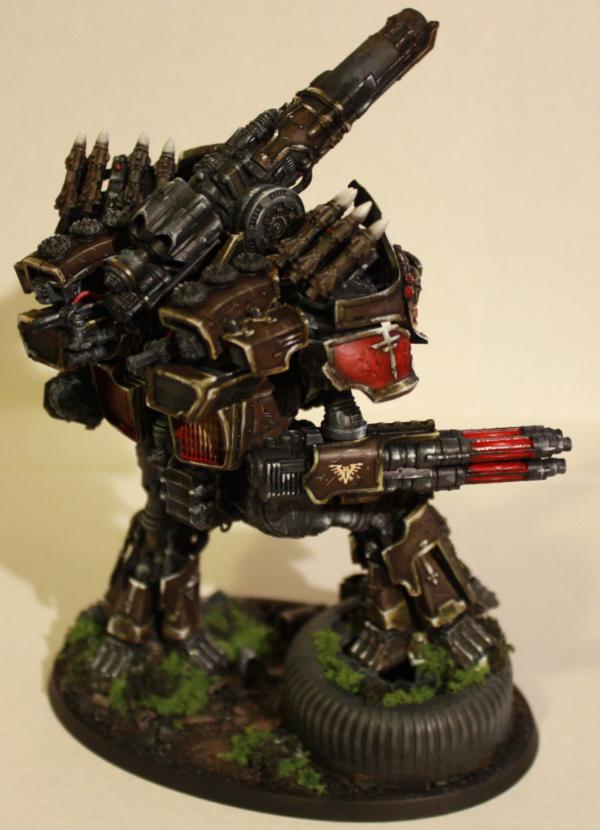 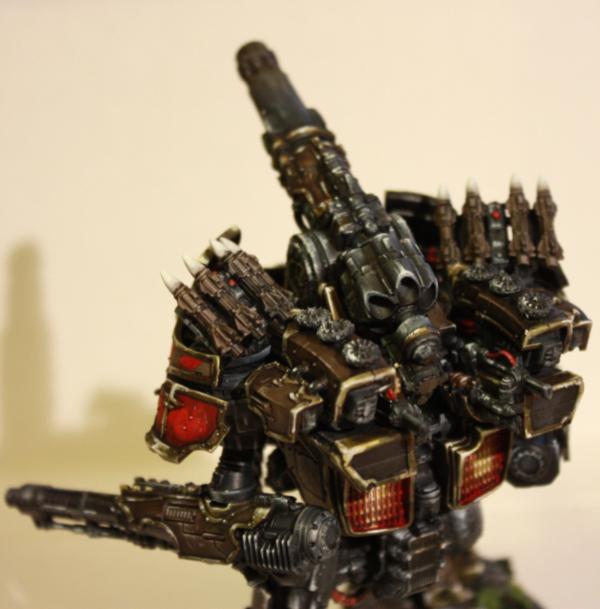 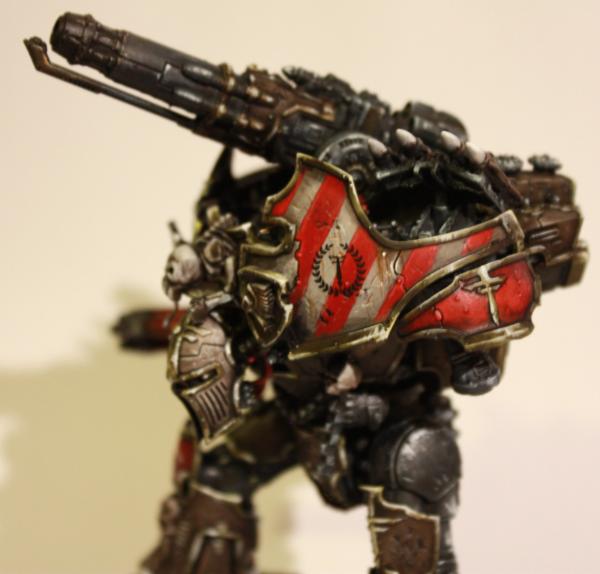 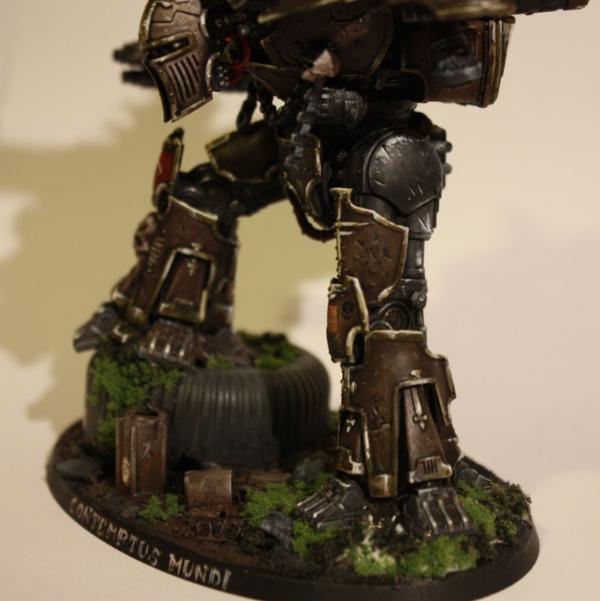 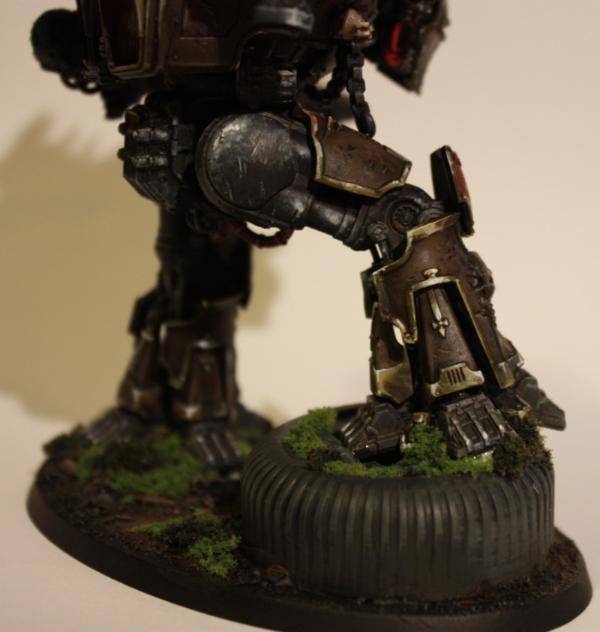 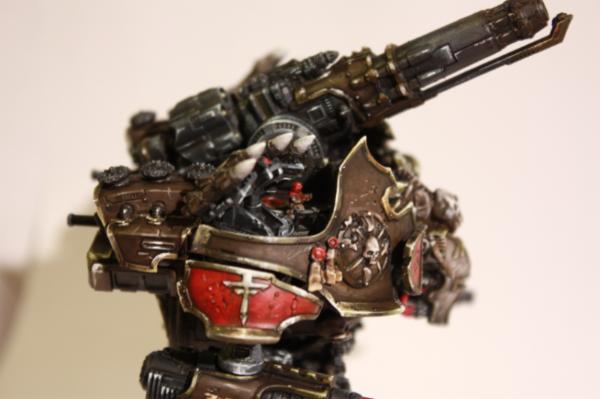 What a BIG change in the overall look! The vibrancy of the red is in stark contrast to the rest dark-ish look. A VERY Grimdark interpretation there Sherrypie, I'm in awe!

Haa, have I finally achieved a new rank in the hobby when people react with a jaw drop

Thanks Cap! Operation "baroque by the bucket" rolls on full steam.

Pic of all my knights redone... I will do the transfers and stuff in the next few days.

Not really a vow its more of the redo... with added Pory and Cerastus

Very impressive force you got there! I look forward for the decals, they have a tremendous impact in the final look.

It finally begins... My first Titan.

1st part of my Regia Maniple for my Legio Armatura - The Gorgons.

I doubt very much I can get 5 done before the end of the event with the redo of my Knights but at least 1 Warlord would be good.

Very impressive force you got there! I look forward for the decals, they have a tremendous impact in the final look.

There you go good Captain

Transfers done... not sure what to do with the tilt shields thou... The Terryn crest does not fit there...

Well, they do look amazing, don't they? Job's a good 'un! Now on the Regulus Vindictae!

Nice work Einar. Shame the transfers don’t fit the shields. That seems to kind of defeat the point in having them. I’ve been sort of planning to make my knights as Terryn because I’ve got their transfers, but if the transfer don’t fit...

Meanwhile some progress can be reported. My warbringer is done and all four of my warhounds are well on the way. The Astorum one is ready for its transfers. For the three Mortis ones I’m doing a bunch of guns - 10 in total. I made cables for a pair of inferno guns out of bent rod designed for pinning, which took a while. Wish there was a third pair of those cables on the sprue, instead of the pointless extra plasma cables.

No pics for now because the warbringer is going in a competition on the FB group, which is anonymous. I’ll post some soon, maybe with some more finished models. Looks like I might actually succeed at this 6 Titan vow! 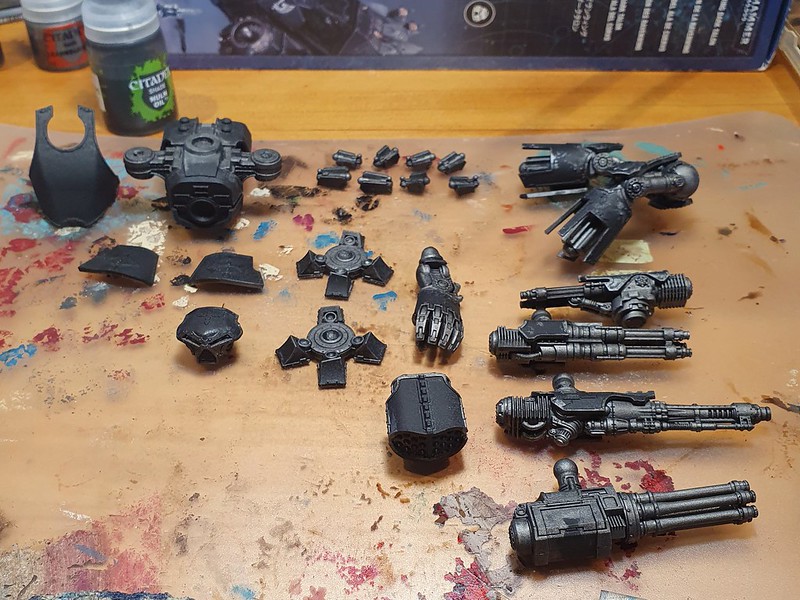 Captain Semper Brother, my Son has settled on names for his Lords of War, if you would be so kind as to add them to the roll:

The Warlord: Reaper of Worlds

Hail! I have completed my fourth Titan, with one more to go on my current pledge. May I introduce the Legio Fureans Nemesis-Warbringer, Thunderchild; 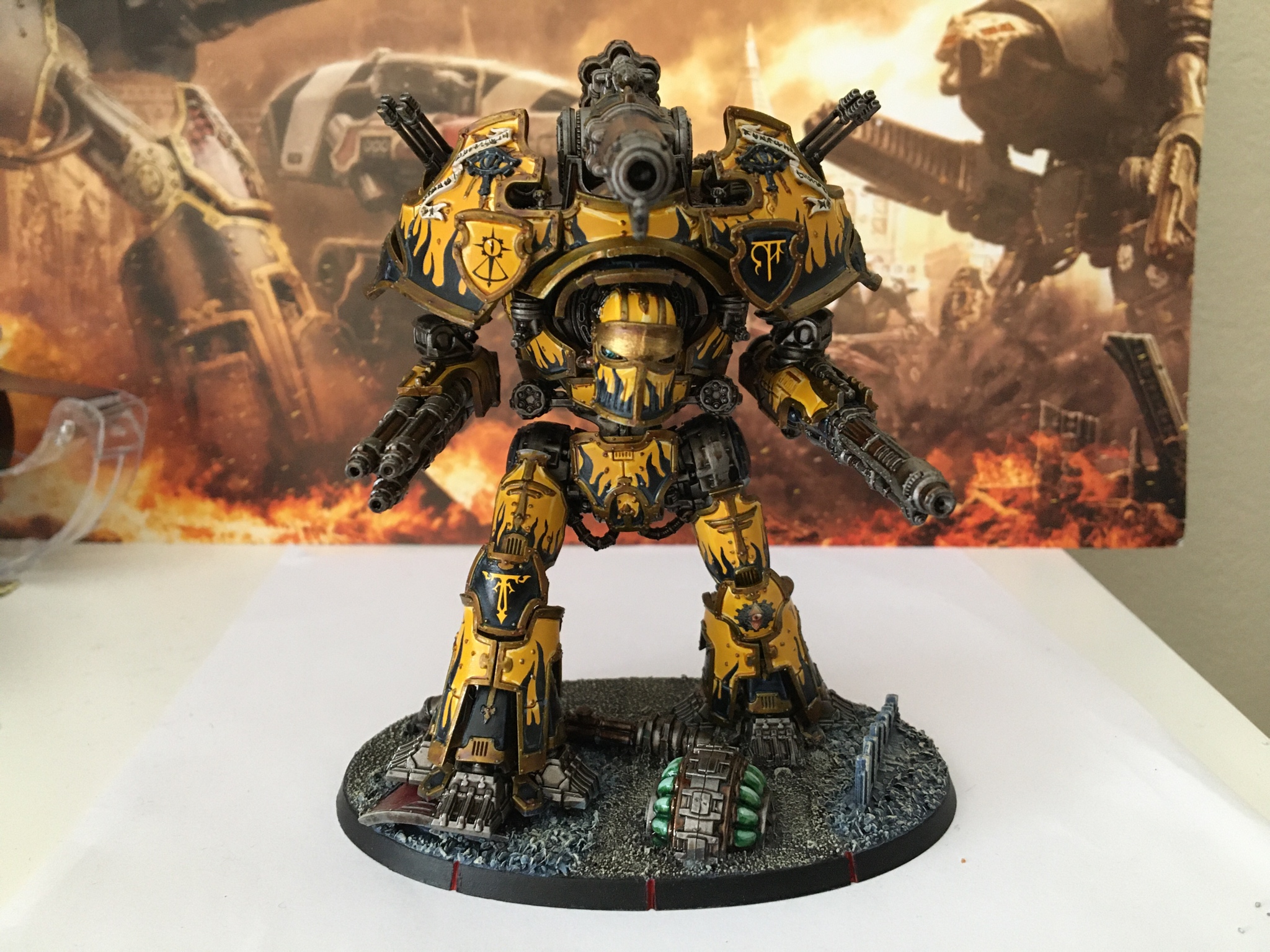 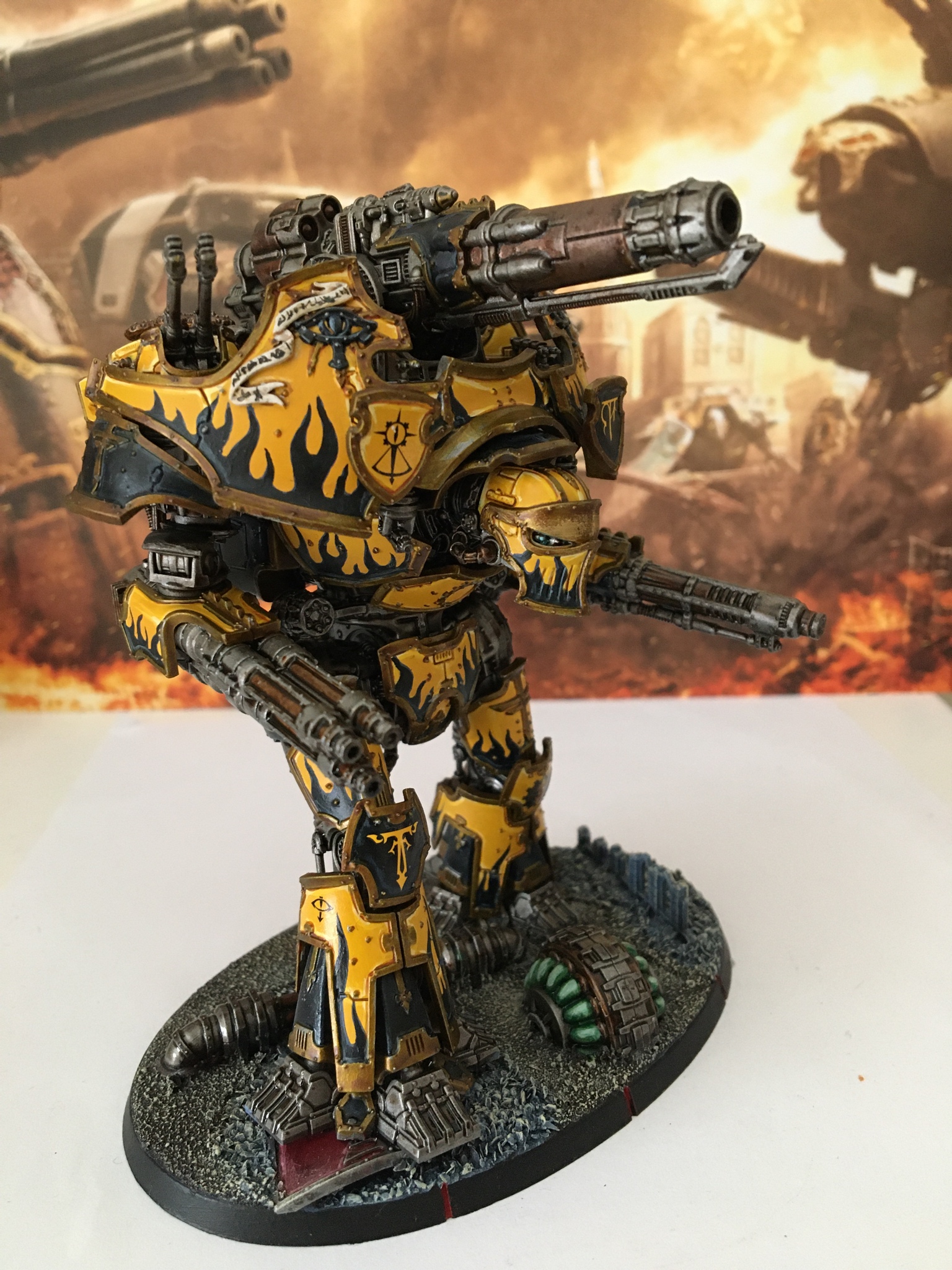 Next up is my Psi-Titan for the opponents of my Fureans force!

Swift update here on the vow. Here’s a shot of the 6 titans I’m doing: 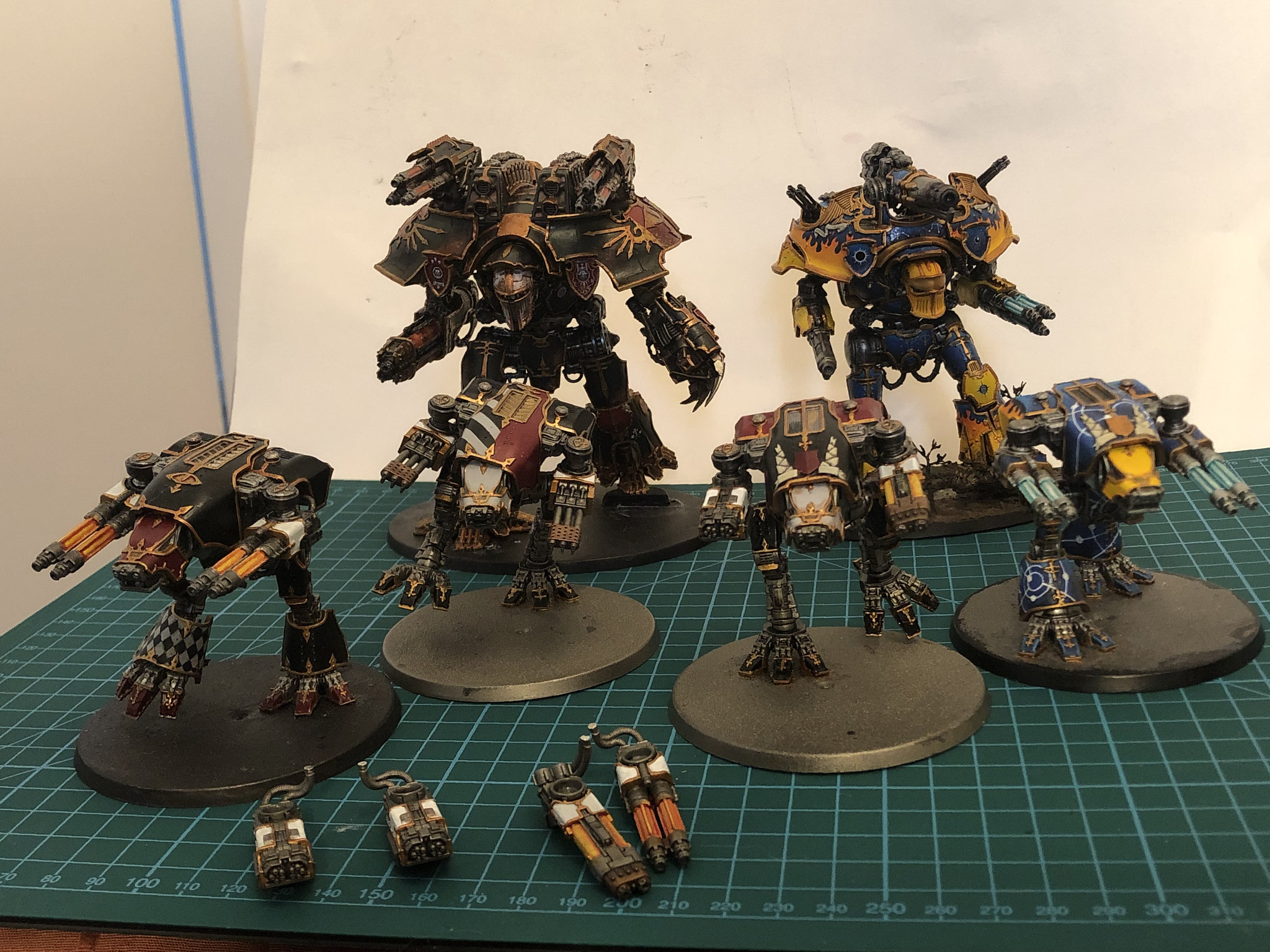 So I’m feeling pretty good about finishing this vow in time, with two weeks left. All my titans are built and basecoated.

The Warbringer is finished. I’ve put transfers on and I’m not totally happy with them all, so I might revisit that, but otherwise I think it’s come out pretty well.

The Astorum Warhound is ready for transfers, weathering and basing.

The Penumbral Reaper is virtually ready for basing. I want to do a couple of details like the eyes of Horus. Basing needed, obviously.

The three Mortis hounds are coming along quite nicely. I’ve got them all basecoated so the next thing is some highlighting on the black, red and white areas. Then transers, weathering and basing. I’m giving each one its own pattern on the leg armour, probably to be shown on the right leg. Here are my pairs of designs, all of which need some tidying up. I've found that it definitely looks better if I pick out the rows of rivets in gold, but it's a bit of a painful process as they're so tiny. 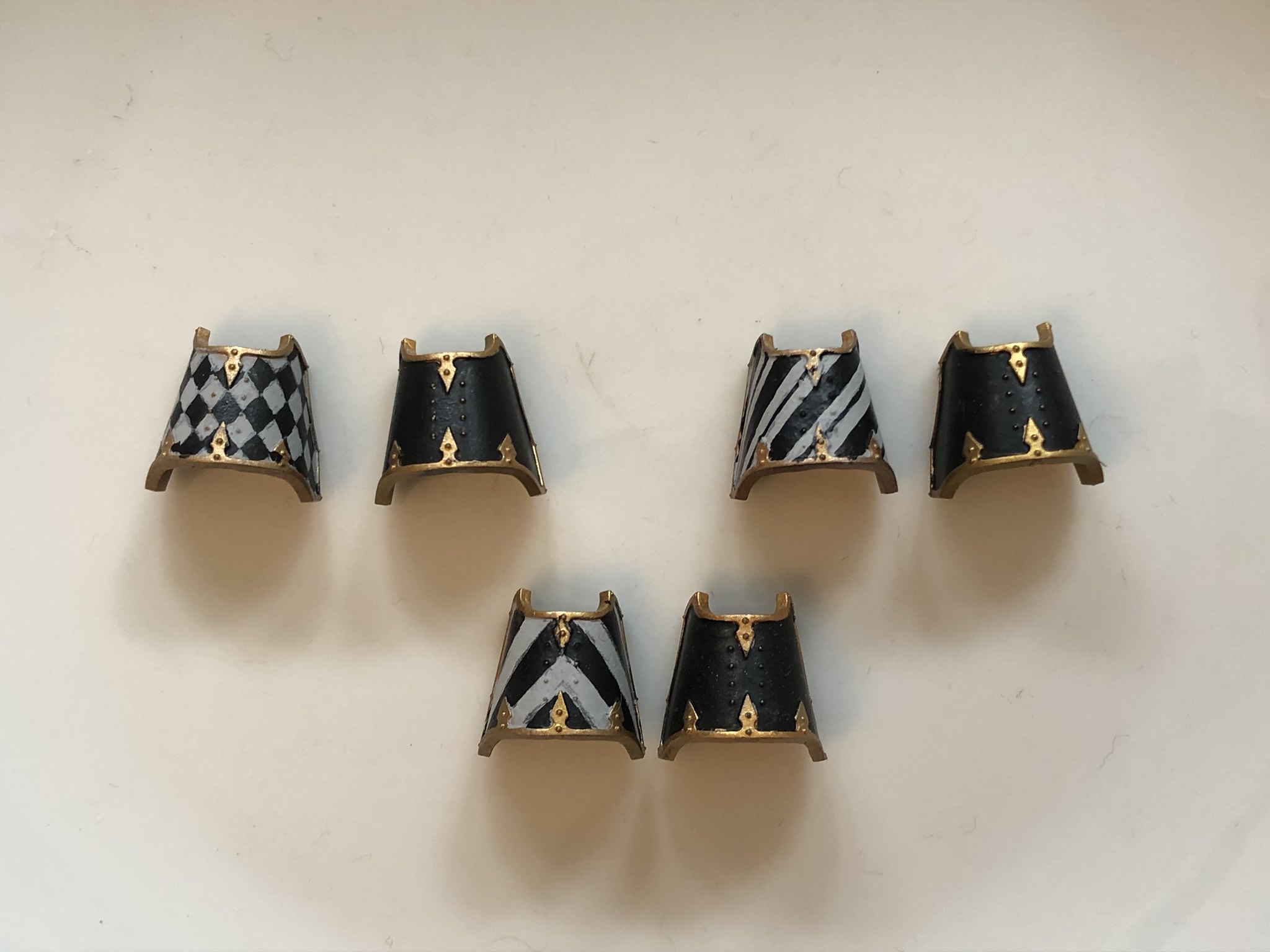 The plan is to get all the hounds ready for their transfers and then do that, the splatter mud and basing for them all. My Mortis guys are going to have the same style bases as my Astorum, to show that they’re fighting over the same place.

I did originally plan to do a Mortis Reaver instead of the Warbringer. That’s still in its box. I plan to do another hound and that Reaver for Mortis, so I’ve got a 1750 point force with minimum-sized Mandatum and Ferrox maniples. Self-isolation has given me more time to paint models but less of a need to make them into a field-able army right away. So I’ll probably take a bit of a break from the Mortis army and work on other stuff – like my Psi-Titan and some Aeronautica stuff I’ve recently (and perhaps foolishly) ordered. Oh and I’ve got a load of AT knights to do, if I ever decide what household to go for.

Good luck to everyone else working on the vows, and hope you’re all doing ok generally at this mad time.

And now for my next Vow

A yet to be named Raver titan

Your titan bases are really nice. They make it look like these God-Engines are fighting in a rather pleasant suburb with actual grass, pavement and streetlights and not in a nightmarish war-torn battlefield completely inhospitable to human life. I mean the area they are fighting over will probably become the latter, but I really like how making it seem pleasant almost makes it more tragic when you think about what will happen once they unleash their weaponry.

"Loyalty is it's own reward." -Lion El'Jonson

Agreed. Those are fun bases.

If Mard's bases are "before", then mine are "after" 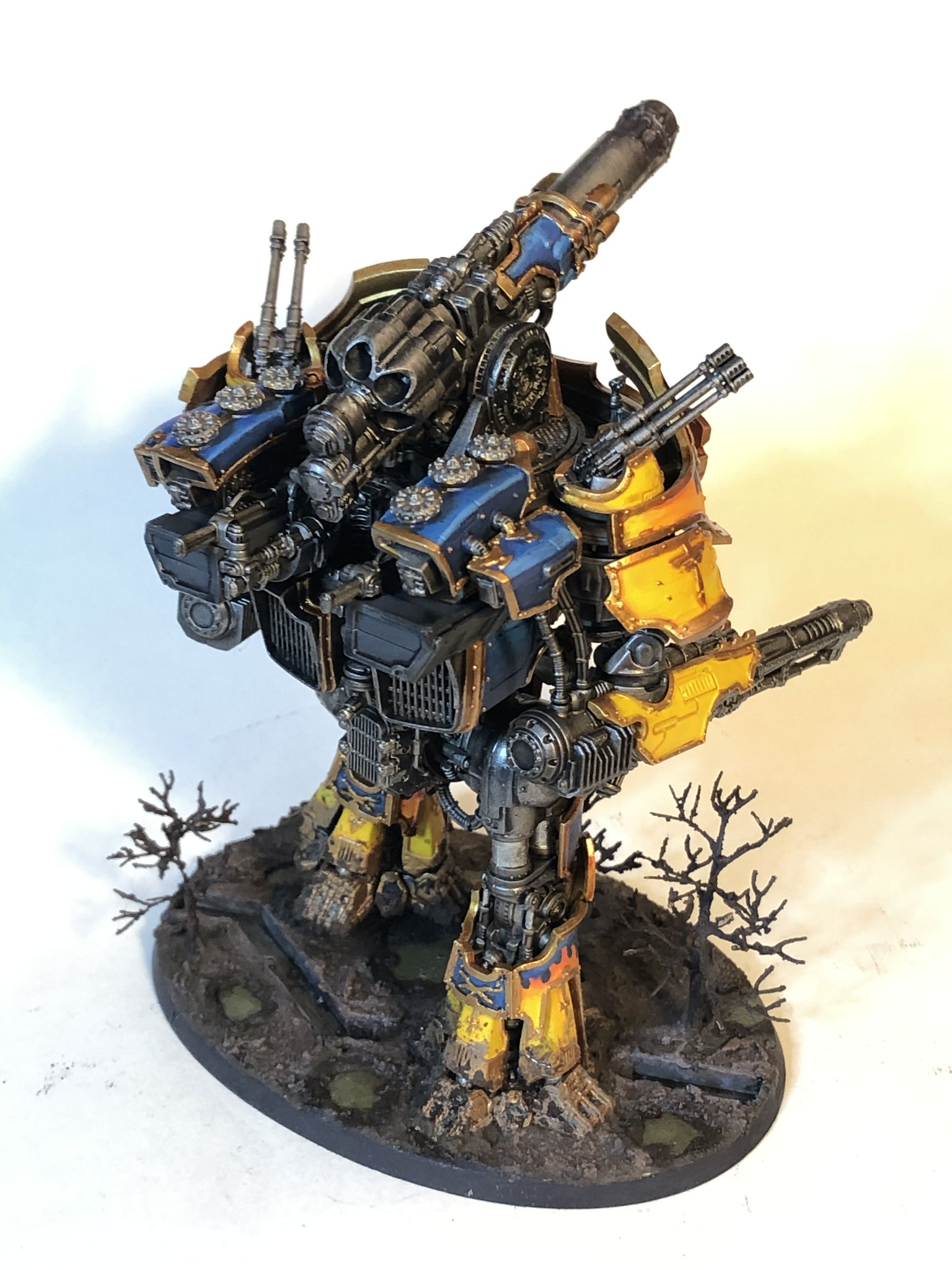 The Warbringer has ended up being my first properly finished titan for this vow. That's not what I expected, but I'm quite happy with how it's come out. 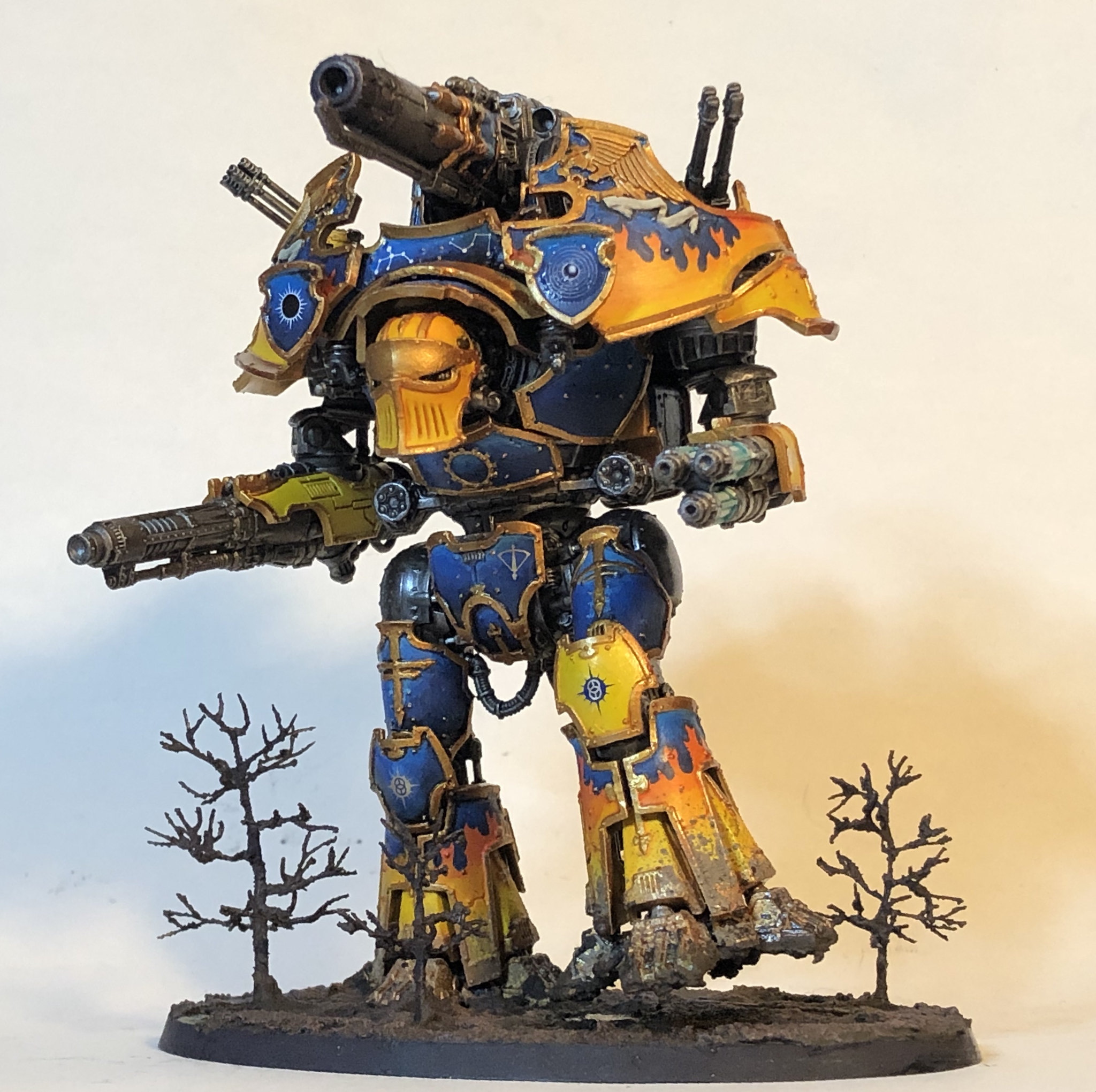 Still working on it ... But I've done the plasma glow now.

Inspiration for my bases was watching the documentary by Peter Jackson called "They shall not grow old". The film footage of the gray mud of the fields of France with trenches dug in and pools filling with rainwater, corpses and poisonous gases left an impression on me that I don't think I will shake soon. I don't know if that was what you were after on your base Mandragola, but they remind me of that grey clay sludge sticking to the titans feet and with those potholes filled with brackish, disgusting water.

"Loyalty is it's own reward." -Lion El'Jonson

Yep, that's exactly what I was after. Glad you think it's worked.

What did you use for the burned out trees?

Edit: got too excited to ask the question and forgot to say I love them.

They’re brass etched trees from 4d model shop. I give them a coat of Stirland mud to make them round-ish instead of flat. It makes them a bit knobbly too. Simple.

@Mandragola: The trees do look good with that mud on them, gives them a nicely non-uniform and natural look. The grey sludge of WW I is, oddly enough, an eerily beautiful sight on these models. If you wanted to push the shelled out look a bit further, maybe consider clipping some branches off and lay them in the mud? With full, rounded branching still on the trunks, they look more singed than shelled, unlike the very hard hit ground around them.

Even when there's some branches left, it'll be like this:

So finished my two ex Solaria ones, not sure how they count towards the vow as they have been repainted.

"Way of Kings" Left. Oldest Warhound in the legio, it's seniority reflected in it's black armoured head and weapon carapaces (figured the difference in head colours in the examples in shadow and Iron had to matter somehow) and known for it's calculating but stoic and good natured temperament.

Right "Mistborn" In contrast, the titan engine "Mistborn" is one of the newest warhounds of the legio, having only been deployed once prior to the Crusade of Iron, and with a rash and haughty machine spirit that has seen it assigned to squadron with the way of kings in the hopes the elder God machine may have a positive effect on the younger one.

It's time to extend my vow, this time with a Warlord, this will bring me to four,