114 replies to this topic 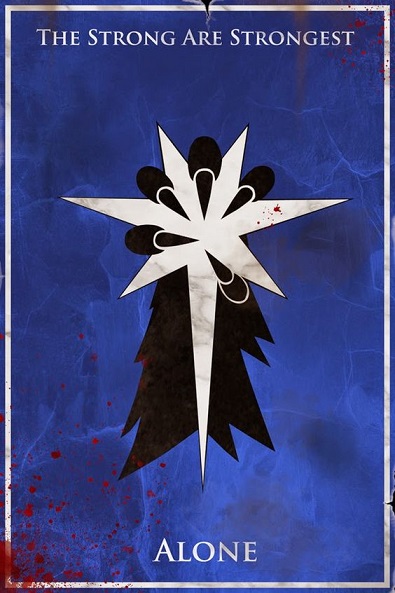 Another storm of bolt shells clattered against boarding shield, the adamantine pavise weathering against the rupture of detonations along its slab frame.

"Push!" roared the Strike Leader as the shield wall pressed forward, boots sinking deep into the mire of mud and ruin as they moved in terrible unison. They moved down the highway, their cold wall of adamantine corralling the Auxilia forces forward into the enemy's gunfire. For the mortal chaff, there was but two fates that they were given; throw themselves into the enemy with the barest glimmer of a non-existent hope for survival, or turn and face the certain death of their savage masters.

Muranu snarled, a savage and guttural sound as he breathed through clenched teeth, smelling the recycled scent of his own genetic-rich blood as it filtered through his oxygen supply. With the Strike Leader's command, he pushed with the bulk of his pavise, forcing the terrified mortals forward to face the Star Phantom bombardment point. Up ahead, head could make out the ghost-white silhouettes of Whirlwind siege engines cresting the avenue, releasing their deadly payload towards the Palace walls. Just below that, two tactical squads and an accompaniment of tarantula turrets defended the siege position, releasing their payloads into the street and scything down Auxilia and Armsman alike.

His chainsword dripped with blood, the teeth clogging with the sticky cling of gore that caked at the chains. There was far more human blood than Astartes on his blade today. There always was. He'd been fighting without pause for days, fighting and leading these worthless vermin into the maw of battle, knowing their deaths were spent just to buy a little more time. It was all spent to stall the inevitable.

They were all going to die here...

Behind the Retaliators, the Hyaenidae moved in close, taking snap shots between the shield wall and following up the rear guard. They followed in the wake of their Lion masters as loyal hounds, sanguine with the doom they now faced and willing to die alongside their masters. What else could they do? When faced with annihilation and no other alternative, once might as well continue moving forward.

The eye-aching flash of a plasma gun's discharge temporarily blurred the filters of his helm, the heat of a star cast out towards the retaliator line. Muranu intercepted it, bracing his weight in the mud as he lowered his shield and shoved the end straight into the knees of the nearest Auxilia. The woman fell, screaming in her respirator as her legs her shattered before she was lifted up onto the angled pavise and brought directly in line with the inferno ball of blue-white plasma. It slammed into Muranu, his entire bulk pushed back a few inches as it impacted with the Pavise. The Auxilia took the worst of the volley, her shoddily-fashioned flak-plate and malnourished flesh took the brunt of the impact and dissolved in absolute agony. She had paid the Tyrant's Due, her life spent as currency in Lord Huron's hand as what remained of the charred corpse was cast to the mud and trampled beneath ceramite boots. Then the testudo reformed, and the Retaliators advanced once more.

Pict-feed taken at the siege of the Palace of Thorns, exterior defense grid LJ5-GB 22

Subject announced K.I.A. from cranial trauma, head caved in by a Crozius Arcanum

His shield broke before his body. His blade snapped after his mind 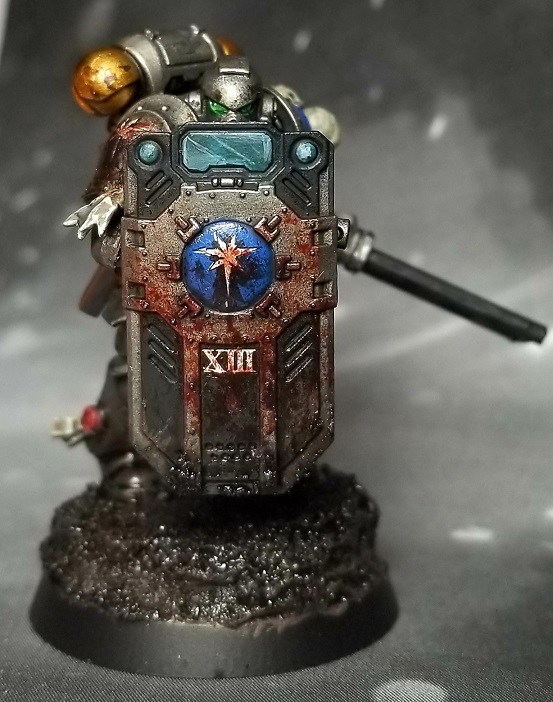 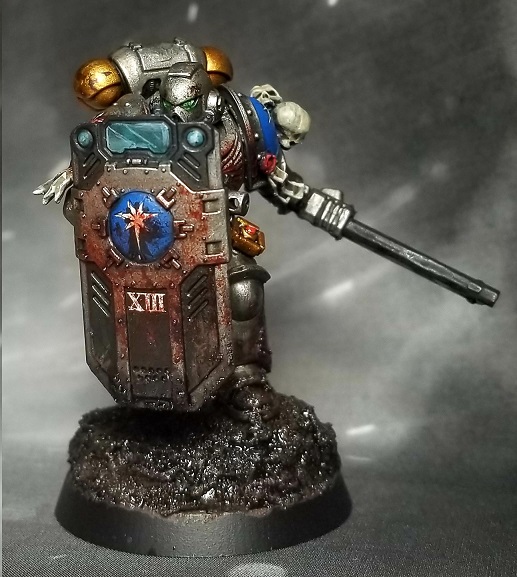 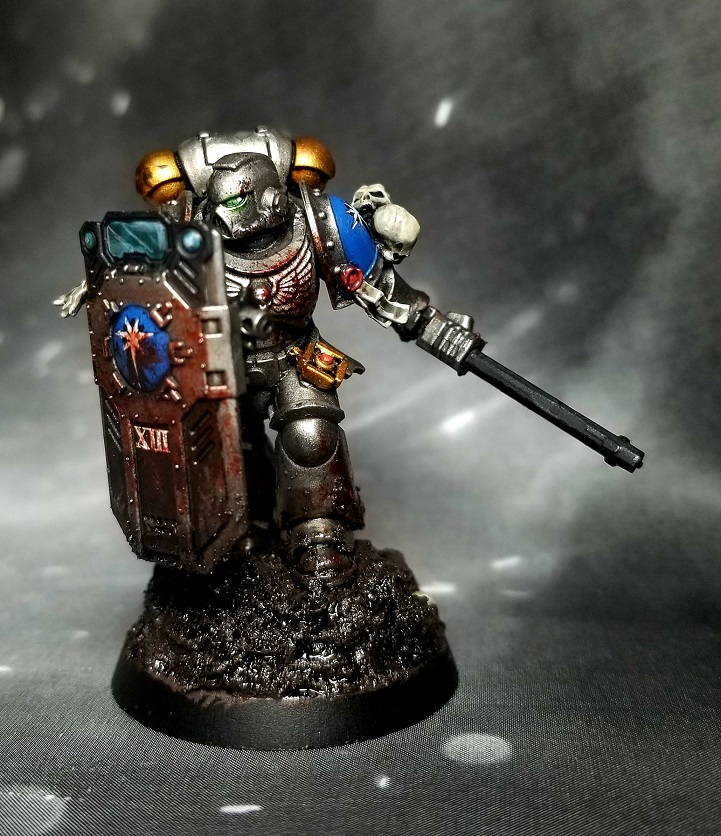 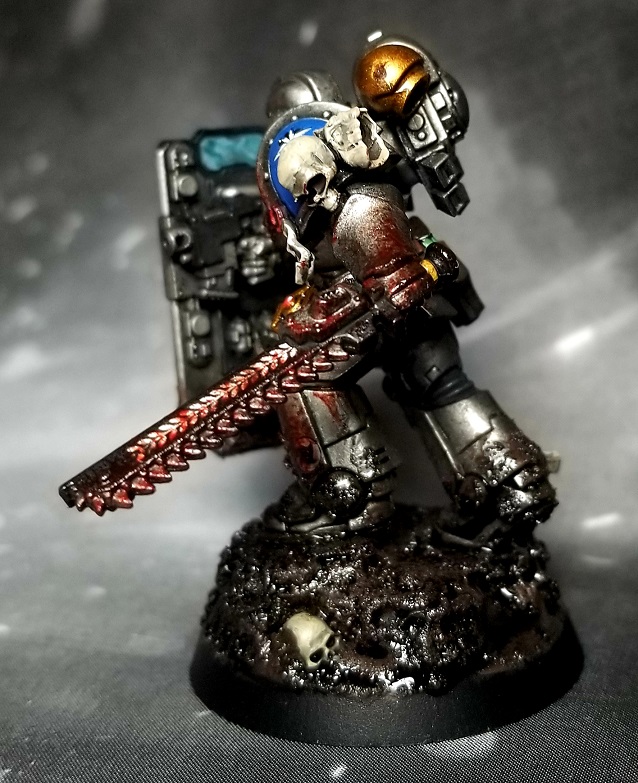 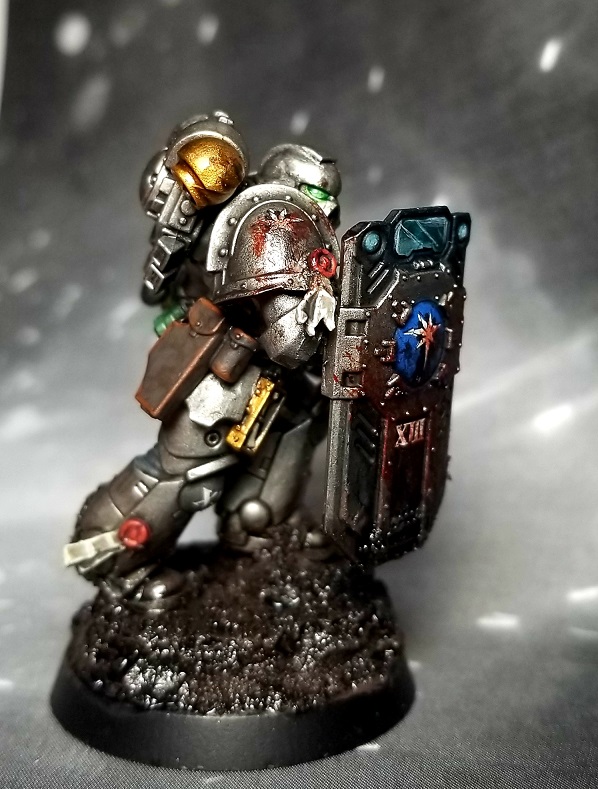 I'll admit the Astral Claws came down to a knife edge in drawing me away from the Marines Malevolent.

That Muranu is a bit of a beast!

Putting the Gore into Gorgeous! Excellent!

Another really enjoyable piece of writing and a great hobby piece to match it! I love the smeared, dirty faded glory of Murano's plate

I'll admit the Astral Claws came down to a knife edge in drawing me away from the Marines Malevolent.

That Muranu is a bit of a beast!

Much appreciated, friend! Astral Claws are, by far, one of my top favorite organizations in the 40k lore. They're only just barely topped by Word Bearers and old school Black Templars (4th edition lore).

Marines Malevolent are great. I sorely considered at one time going back to them, but decided to better focus my attention on existing projects.

Putting the Gore into Gorgeous! Excellent!

Glad you like it! I'm honestly so incredibly happy with how the gore came out. I'm super thrilled.

Another really enjoyable piece of writing and a great hobby piece to match it! I love the smeared, dirty faded glory of Murano's plate

Thanks, mate. Underneath all that mud and gore, there's still a Lion's fierce pride...

Excellent painting and writing. I always enjoy your posts.

Excellent painting and writing. I always enjoy your posts.

And I always appreciate your continued support. Thank you, Badgers.

Thanks! I've been super happy with this new method of applying blood that I recently developed. It's been such a treat to utilize, now that I've got a hang of it!

Should have something more soon, lads! Looking forwards to sharing more!

Ok I really like what you've done with the shield.  It has me eyeballing it as an alternative to my plan for using Bullgryn shields in a similar manner.

@NC what shield is that on the Retaliator? For the life of me I can't find them.

@NC what shield is that on the Retaliator? For the life of me I can't find them.

Yaaaas thank you! I haven't dived back into the necromunda revival so they slipped totally under my radar but are perfect for an idea I have.

I'll be sad when GW ditch the firstborn marines for a bunch of reasons, but rich and evocative projects like this are one of the biggest. Superb work!

That is really nicely done. I especially like the grim and gore, it's not over the top and looks credible giving a really nice feel to the over all paint job.