Faith is the Truth of Nothing - A Word Bearers Blog

56 replies to this topic

One of my hobby resolutions this year was to get more involved in the community (beyond just posting on Instagram), so I’ve decided to start a blog to document my efforts to build and paint at least 1000 points of Word Bearers (in 9E points). Hoping sharing my work and thought process will help push me to try new things, and to hopefully inspire others to do the same.

Historically, I’ve also been very hesitant to kitbash and convert models, so one of the aims of this blog is to try and move away from just painting stock models. I’ve also settled on a painting method that strikes a satisfactory (to me) balance between effort and result, so hopefully I can keep to a steady output despite limited hobby time.

Pictures of what I’ve achieved so far: 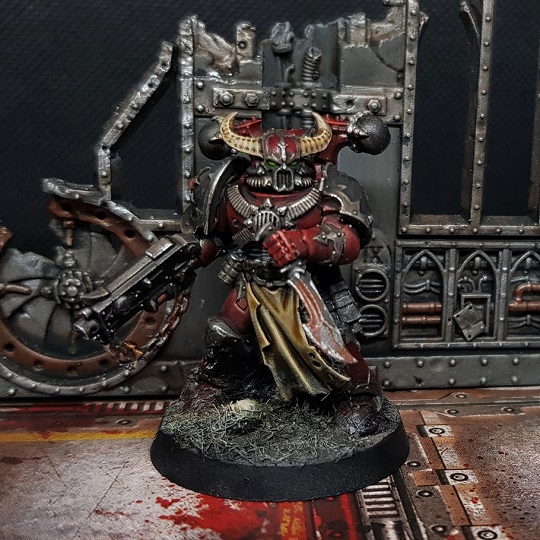 Test Word Bearer paint scheme – for subsequent models, I’d like to include some freehand script on the armor panels. 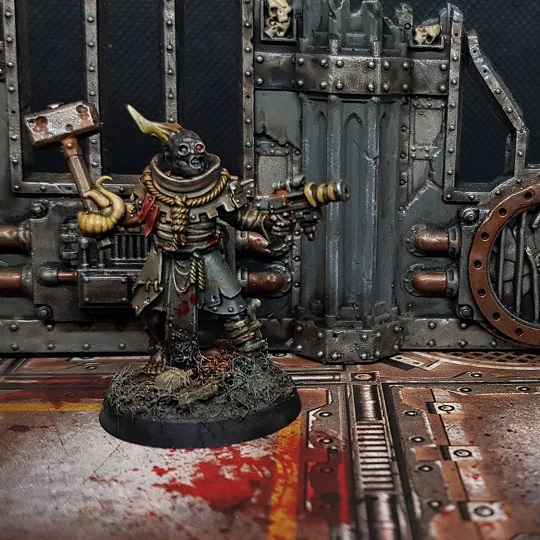 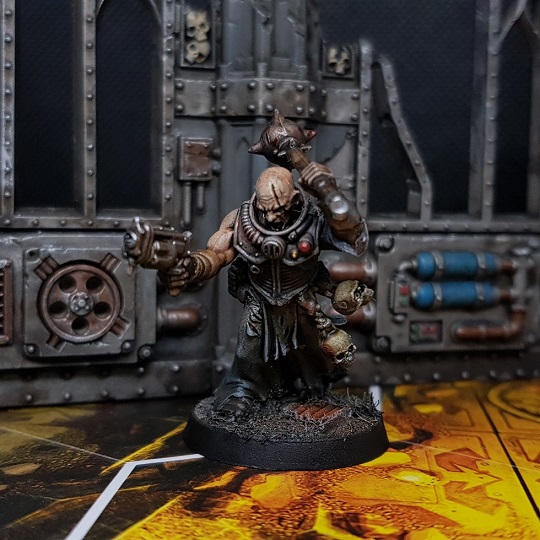 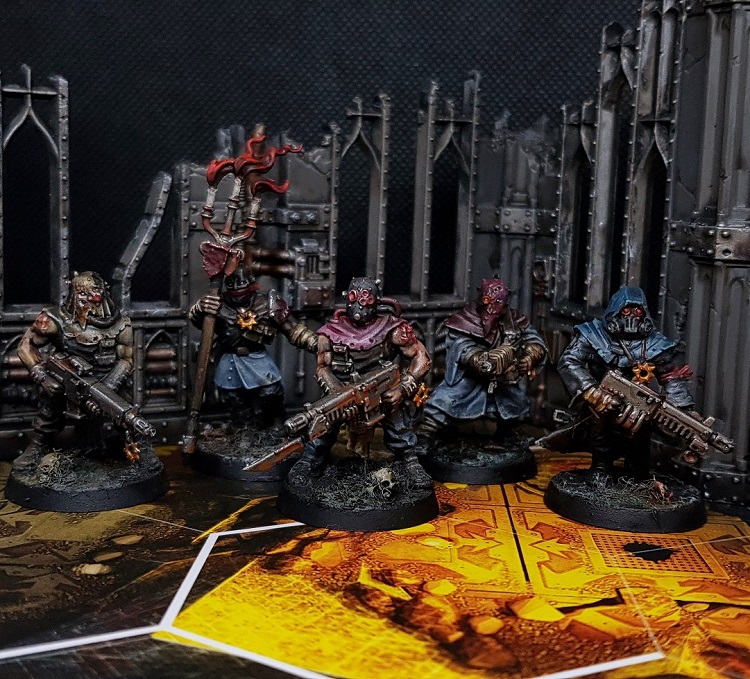 A couple of original cultists I made, together with some of the stock cultists from Dark Vengeance.

So the immediate goal for the near future is to complete:

I hope to share more WIP pics soon, in the meantime, thanks for reading!

Damn! They are really well painted! I hope to see how they all turn out.

Digging the deep rich red of the legionairy, adding the script will finish him and his future brothers off nicely. The cultist rabble are well painted too.

Nice work on the Word Bearer! He is looking proper.

And your convert/kitbashed cultists are looking good too! The Cawdor with what I think are Poxwalker bits looks great.

Thanks for the encouragement, everyone! I do think the Cawdor kit has a lot of potential, but at the same time I think it's challenging to find ways to work them in without overwhelming the entire rabble with Cawdor bodies. I'm definitely going to have to set a cap of using no more than the 5 bodies on a single sprue.

Speaking of rabble, I've managed to put a few more together last night:

First up is a simple head swap on one of the Dark Vengeance cultists. I think it gives the model a whole different vibe, but I feel it's still not different enough from my other cultist using the same body (see below). In hindsight I think I should have modified the earlier model below more, but since that one is already part painted I might settle for exchanging the newer guy's autopistol with one of the revolvers from the new admech riders. 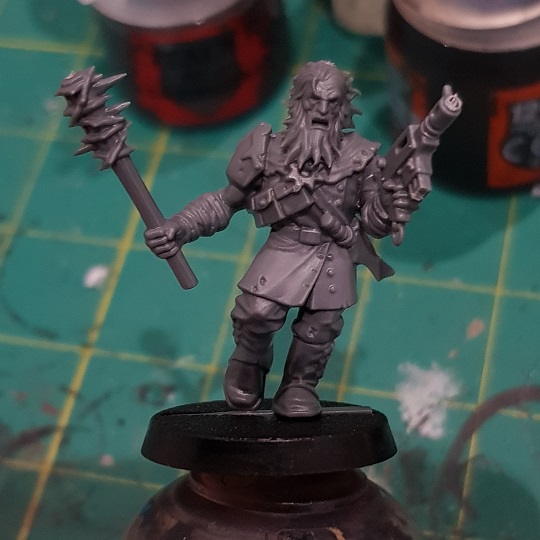 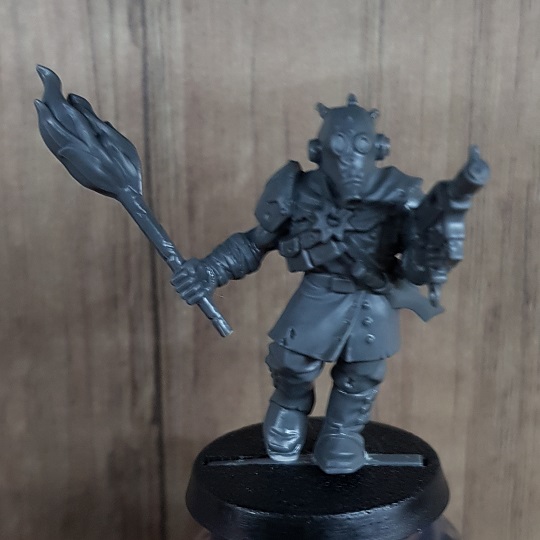 Aside from the equal opportunity cultists, I'm also trying to have a number of cultists who skew towards a particular chaos god (like the earlier poxwalker/cawdor bash). Still trying to figure out how I can incorporate Slaaneshi elements (any ideas?), but in the meantime, here's a pretty Khornate guy. 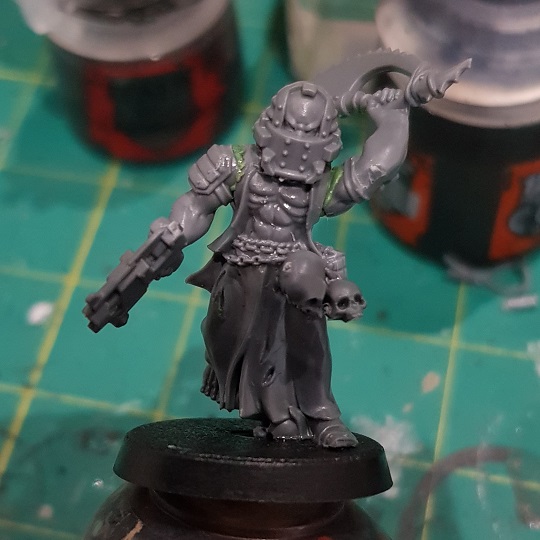 I wasn't really planning on it being just a Flagellant with Corpse-Grinder bits (I dunno, feels a bit lazy), but I tried on a dozen different heads and nothing seemed to really fit (for some reason the Flagellant heads didn't even seem to fit very well with this torso). I probably won't be using that much more Corpse-Grinder bits though (since I want to build them as Corpse Grinders in the future), but to give some visual consistency to the rest of the unit I decided to use another head on this guy: 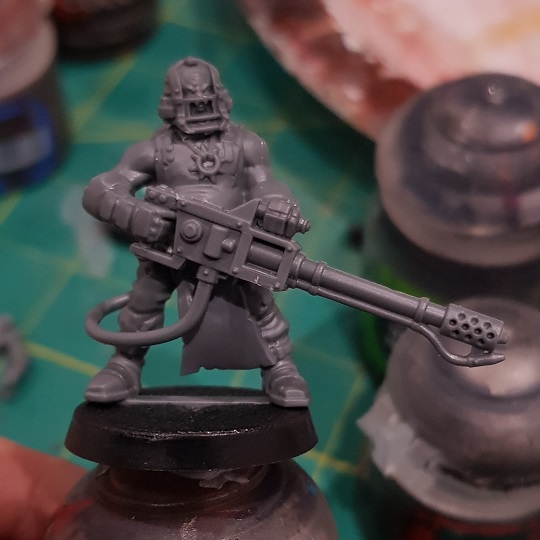 That's all for now, any ideas or suggestions are welcome!

Cultists are looking great. Really like the mix of the Cawdor and Poxwalker bits

Those conversions are really great! They are the best kind, where you can’t tell that it’s not an official sculpt. Also, digging that dark red on the Word Bearer. Great job!

The red on the Word Bearer is a really nice, rich colour!

Thanks for the feedback everyone! The red armor is actually pretty simple to do - I followed Kristian Simonsen's BL tutorial to achieve a zenithal undercoat using Black Templar and Wyldwood, followed by a drybrush of Screaming Skull. After that it's just a matter of coating the armor panels with a 2:1 mix of Flesh Tearer Red and Contrast Medium - if done right you should still be able to see the undercoat beneath the red.

I'll post some progress pics of this tomorrow - in the meantime, here's a group shot of the next batch of 5 cultists (including the two I've posted previously in this thread): 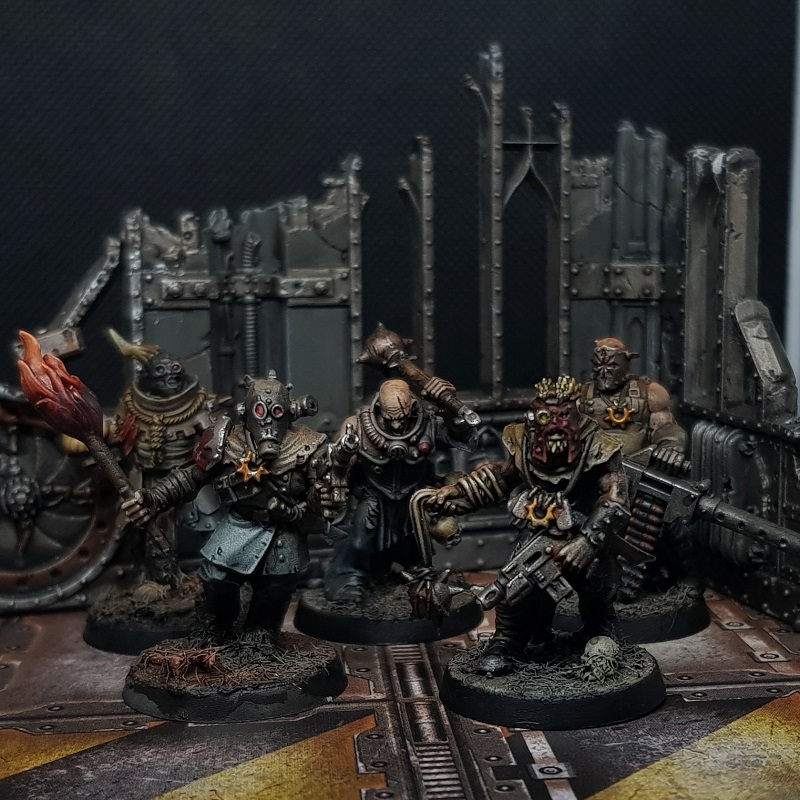 Nice work again with the cultists, it's good to see such efforts being put in, even for the horde units. The burning brand could perhaps do with a little more yellow I think.

Cultists look absolutely wicked! I especially love how bald head with the mace came out.

Thank you! One thing I've come to realise in the hobby is that plenty of things seem a lot harder than they actually look. For instance, I was worried that gluing two incompatible parts together would result in an obvious seem, but so far I've found that green stuff / paint do a pretty good job of covering things up even if you have no talent at sculpting (so far all I can do is use greenstuff like blue-tac and then just scrape the excess bits off).

At the moment I'm still just making minor changes to the rank-and-file Word Bearers with some heresy-era bits (think it'll be awhile before I do anything as drastic as re-posing kits). Some WIP below, showing the undercoat / flesh tearer red process. 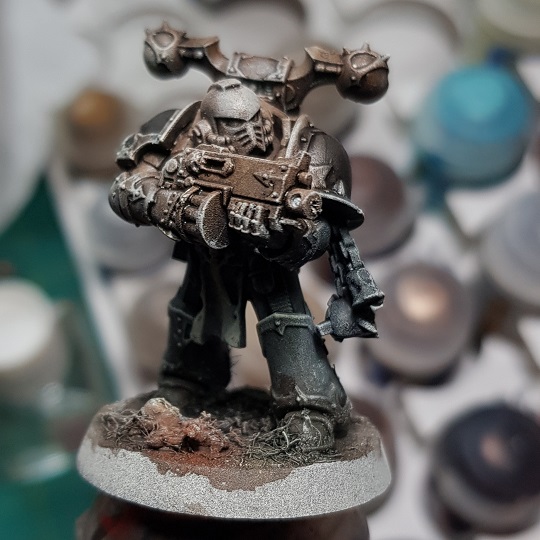 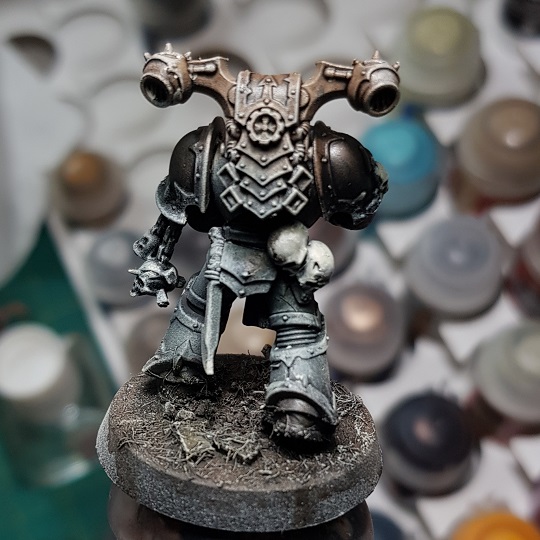 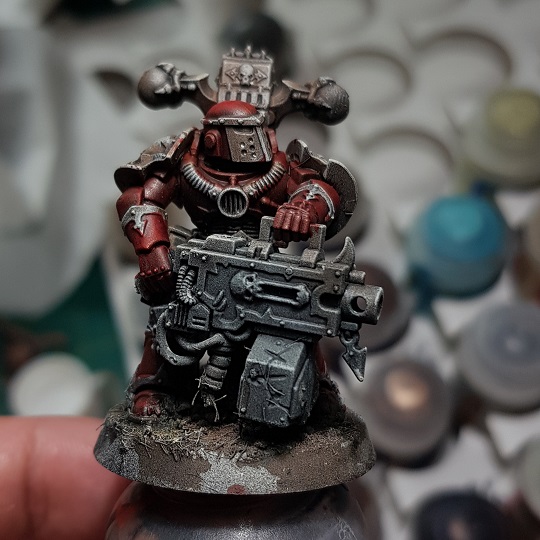 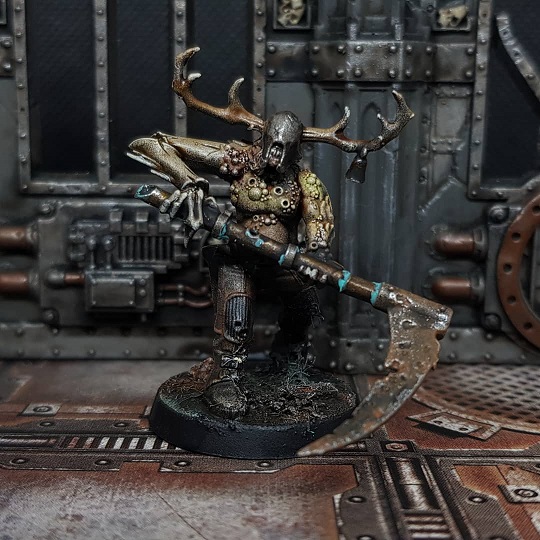 This new cultist is ace, the head in particular, really dark.

My first reaction, even having read it as a cultist, was "That daemon is awesome looking!"

Have to agree, that scythe cultist is awesome. Really Blanchitsu.

Finished another cultist today, based off what is probably the most converted poxwalker in the Dark Imperium - I see mine as a sort of messenger boy whose job is to deliver whatever blasphemous texts his Word Bearer masters are looking for. 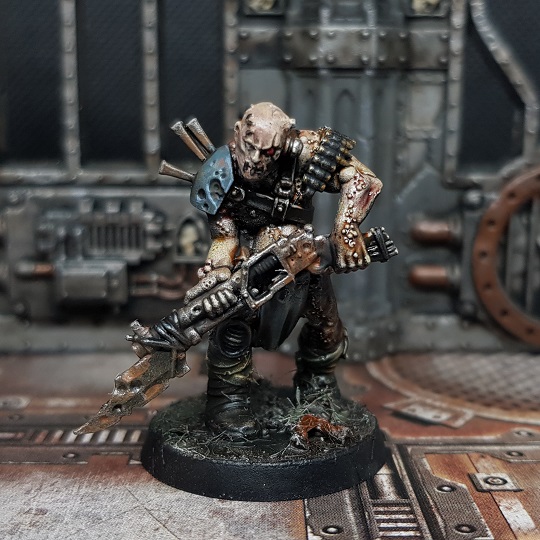 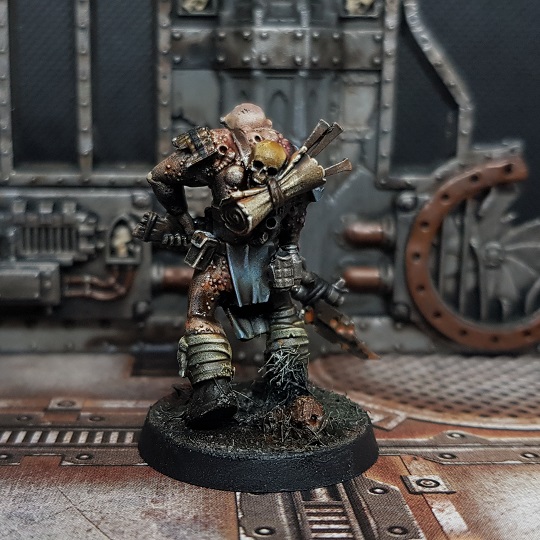 I've also started putting some base colors on another Cawdor conversion, featuring a mix of mechanical parts. Oddly enough the one thing about this miniature I'm most proud of is replacing the Cawdor noose with the chaos star and dog tags. 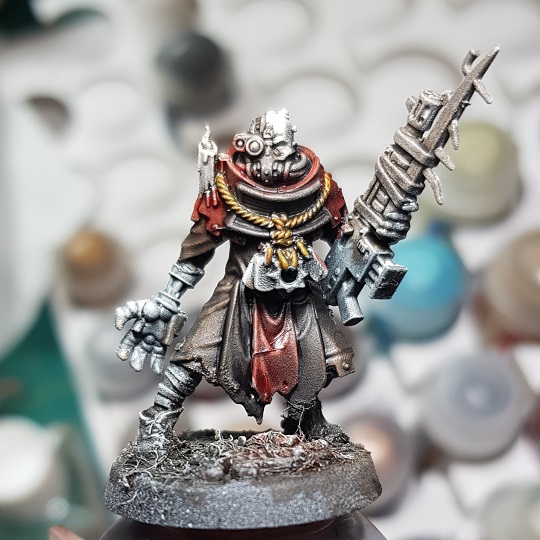 Looking ahead, I've picked up the Unmade and Corvus Cabal warbands, and I'm also thinking of getting the Blackstone Cultists to see if I can work them into the mix without them coming across as too distinct from the ones I've put together so far. But in the meantime, there's still plenty else on my table that needs painting, and I swear I'll actually paint more than one Word Bearer in time!

Truly gorgeous work. May have to steal a bit of inspiration when I get back to my own Word Bearers.

Thank you for the feedback! I'm really surprised myself at much you can get out of contrast paints - most of these guys are like 70% contrast paints and washes, with just some quick edge highlighting for emphasis at the end.

Anyways, the latest Cawdor cultist is finished! Well sort of - I realised after taking this photo that the white drippings on the candle wax looks a bit out of place, so I'll probably touch that up. 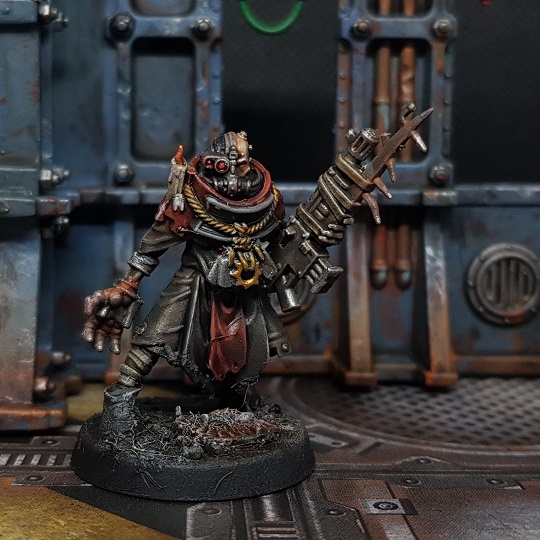 I've also finished another stock cultist from Dark Vengeance - nothing special, although I gave him some green pants to give the mob a bit more colour variety. 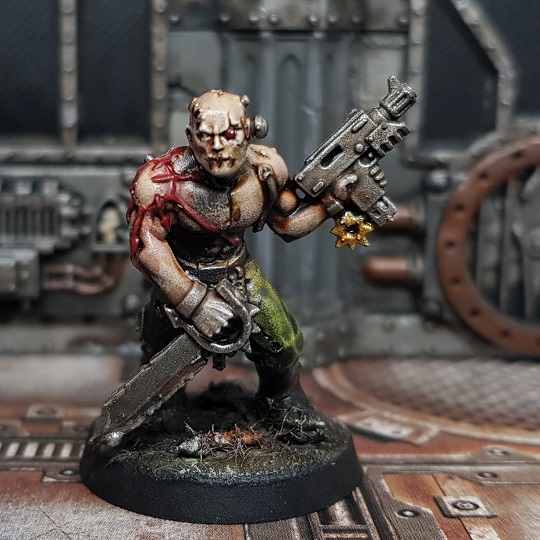 Lastly, I'm trying to squeeze as much mileage as I can out of the Flagellant kit, which lead to the creation of this guy - the intention was to give him a sort of shambling, swaying motion, and I think I succeeded? 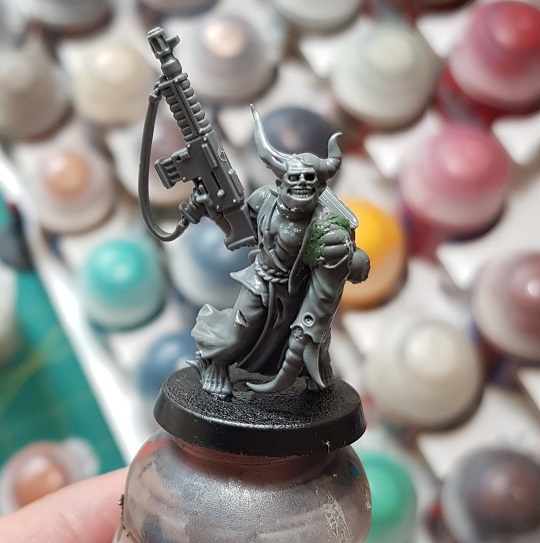 A bit of a question mark at the moment as to how I can build more cultists with autoguns - I've got plenty of arms from the GSC kit, but I haven't quite figured out what torsos I can use. Any suggestions?

Took a step back from the cultists to work on some of the rank-and-file Word Bearers. Here are the two I've completed this week: 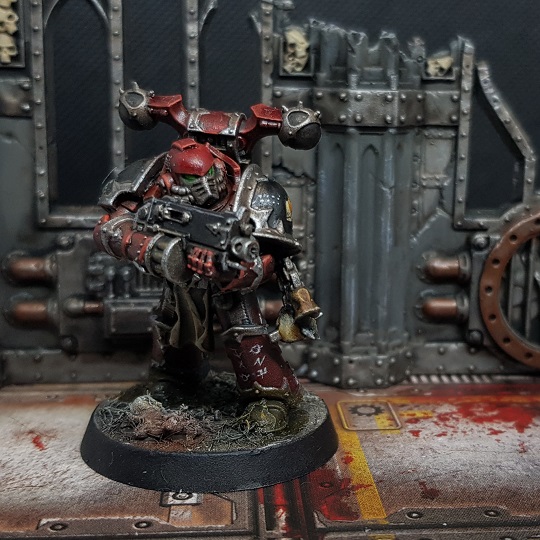 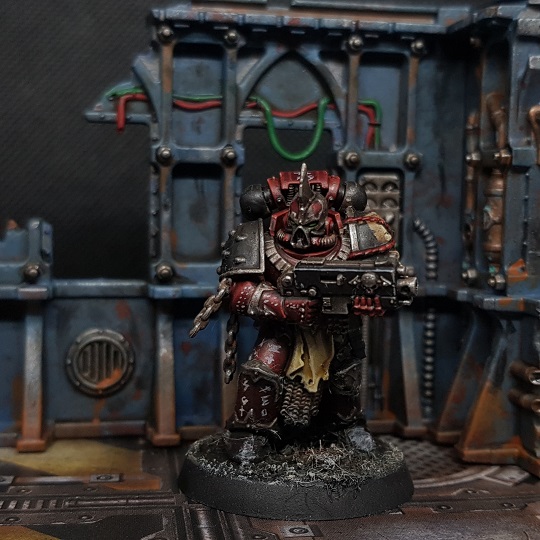 It's not really noticeable from the picture, but I was pretty pleased with myself to stumble across the shoulder pad from the BA Death Company kit. I tried painting some text on it, but the black on beige doesn't really show up well on camera.

Aside from these two, I've also managed to assemble a Aspiring Champion, and another bolter-marine. The idea for the bald guy is to have his head tatooed with runes - I've never done anything like that before, so let's see how that turns out. 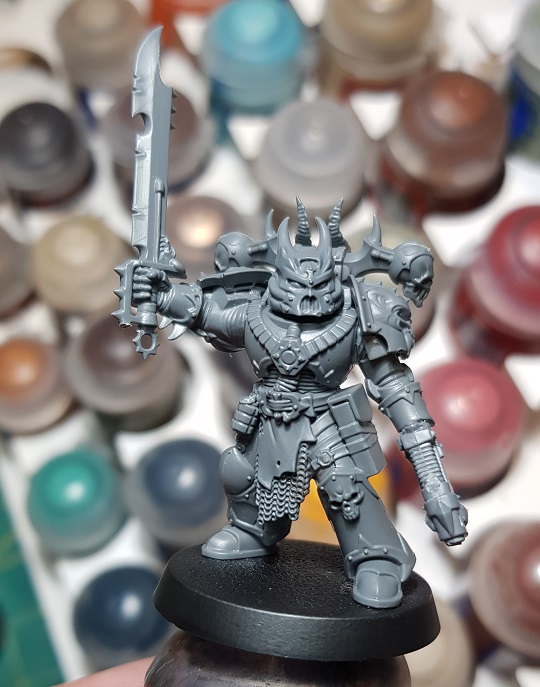 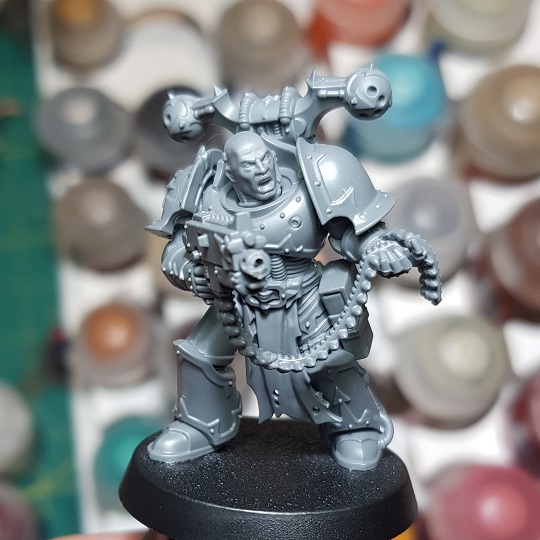 Playing around with the CSM kits has given me a bit more ideas. Once I'm done with this squad of tactical marines, I'd like to try and put together 5 possessed and 5 melee chosen using the CSM bodies.