32 replies to this topic

Quick bit of back ground - I used to collect Bretonnians (RIP) about 14 years ago but just to paint, I never played WFB. 7 years ago I decided to start 40k and bought some Tau (don't hate me) but before I could get ino assembling them I had a near fatal motorbike accident, spent 7 weeks in hospital and came out with a permanently paralysed dominant arm and hand, which I had amputated in summer last year. I have a basic prosthetic which I use occasionally but mostly I make do with blu-tacking models in place. I decided it had to be Iron Hands, I feel like I can relate to a whole chapter of elective amputees xD

As you can imagine this has made assembling minis nigh on impossible but I can still paint as long as I've got someone to put them together for me. As I type I am at my best mate's house for a few weeks while he puts my tanks and vehicles together for me so I can use his airbrush to prime and basecoat them. Painting with my wrong hand has been immensely frustrating but I feel like I am making progress now. My plan has been to paint during the day while my mate is working and then we do the tanks at evenings and weekends. We've just finished the second Repulsor (one is an Executioner), here's the total of what I have:

I've also got the Indomitus box but that was on made to order so prrobably won't arrive til Christmas.

I decided to start a plog to keep up the motivation in the sea of grey plastic I have because I made the classic mistake of going ALL THE THINGS WHEE and getting models that I thought were cool. I haven't even played a game of 40k because lockdown happened the week after I got my (8th edition) rulebook so I have never built an army list and have no idea if the stuff I have is any good. I'm not a competitive player at all, I'm more of a 'just for fun' kind of person. I figure as soon as we are allowed to game again someone a the store will help me get organised. 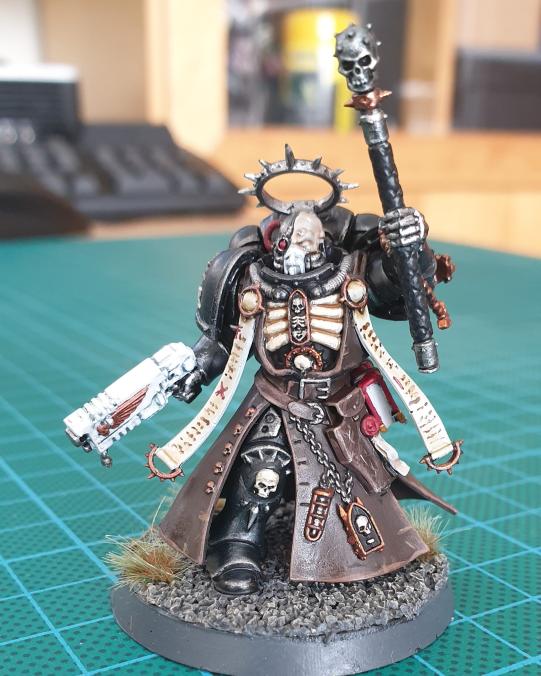 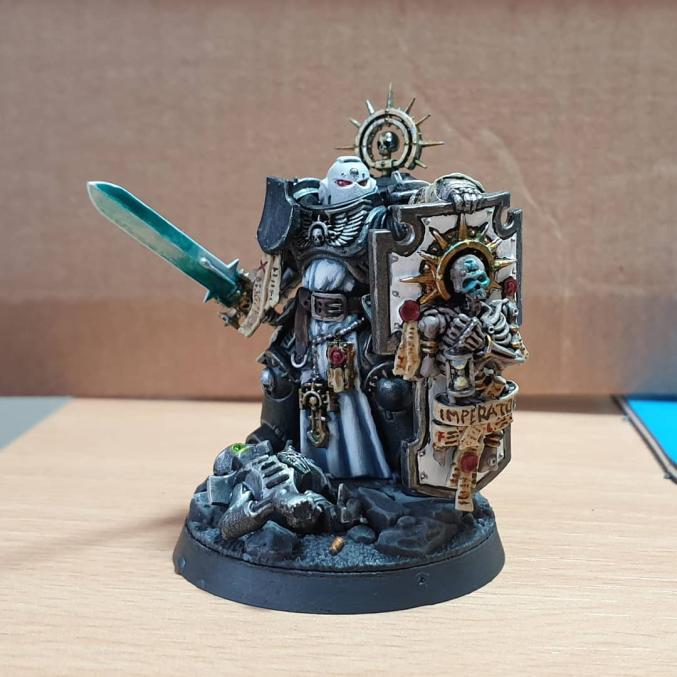 I'm working on my Librarian at the moment, the it'll be the Lieutenant. Saving Iron Father Feirros til last as a reward 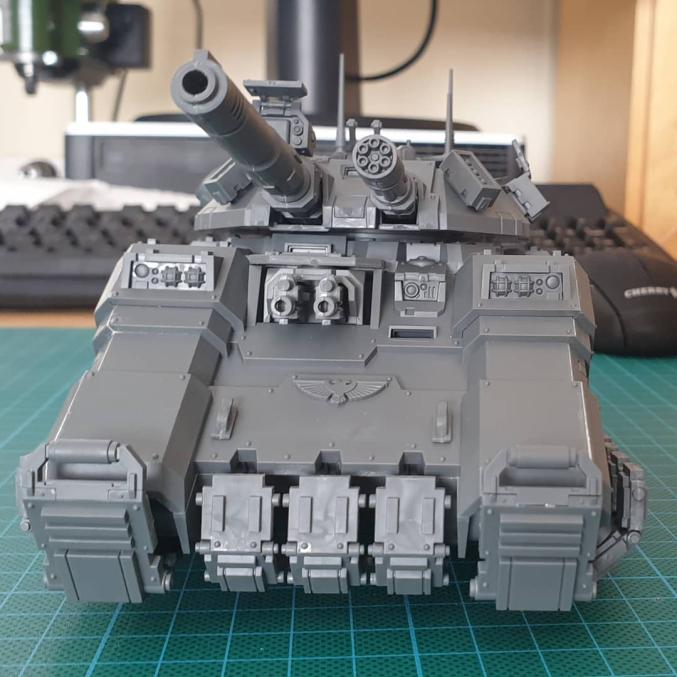 Thanks for reading if you made it this far!

That's some cracking work for the 'wrong' hand, the captain's blade in particular is nicely done.

Good job on the Chaplain and the Bladeguard.

Thanks very much! Struggling a bit on the librarian's robes because I wanted to paint them white and I'm not used to painting cloth, but will keep plugging away. If all else fails I can paint them black and pretend I meant to from the start

Your bionic boys are looking good!

Your painting is very good, the colours are really working together with the layers etc nobody would guess this was you learning a new handedness! Very impressive and better than mine already

Wait this is using your non dominant hand?! Wow great work! Honestly even with both hands I feel it'll be a while before I can do what you have. Welcome to the chapter brother!

yes, this is with my right hand although I've been a lefty for writing/painting/delicate tasks all my life. I bat and throw right handed though but obviously there's a slight difference between trying to gun a runner down at 2nd base and painting space marine eye lense dots

I finished my Librarian today, here he is: 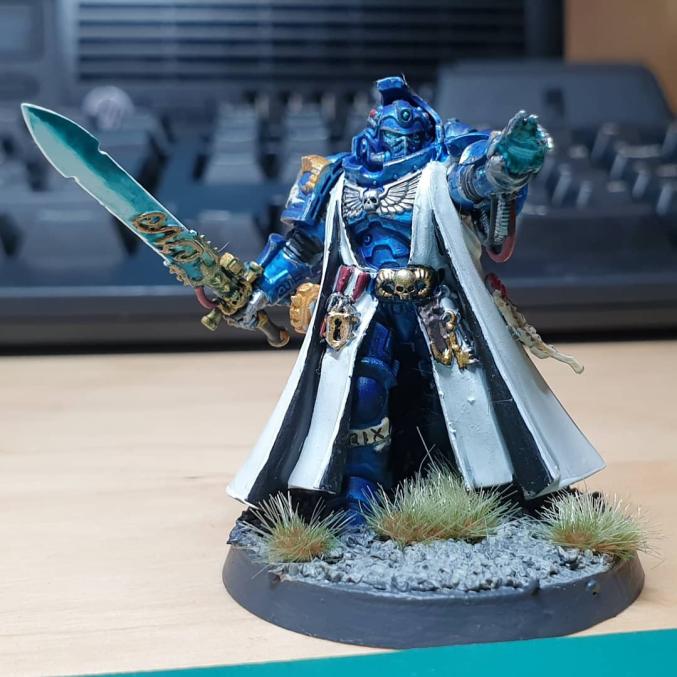 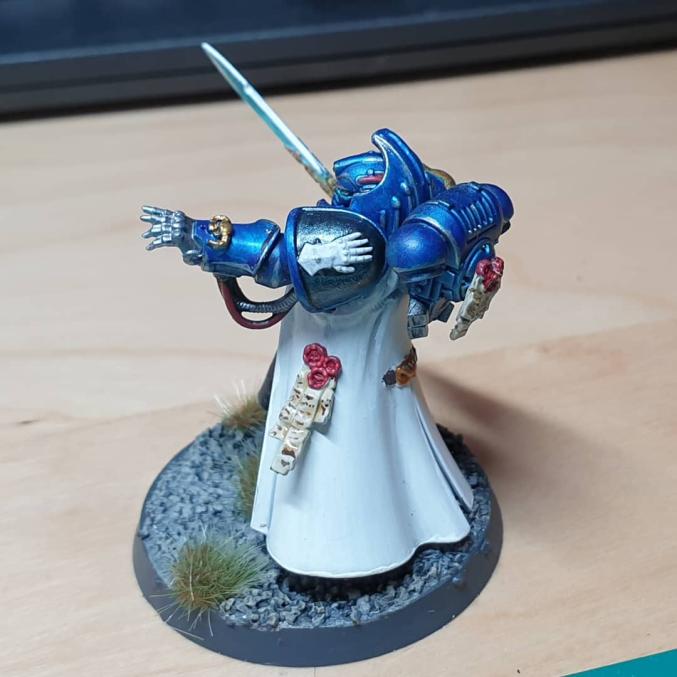 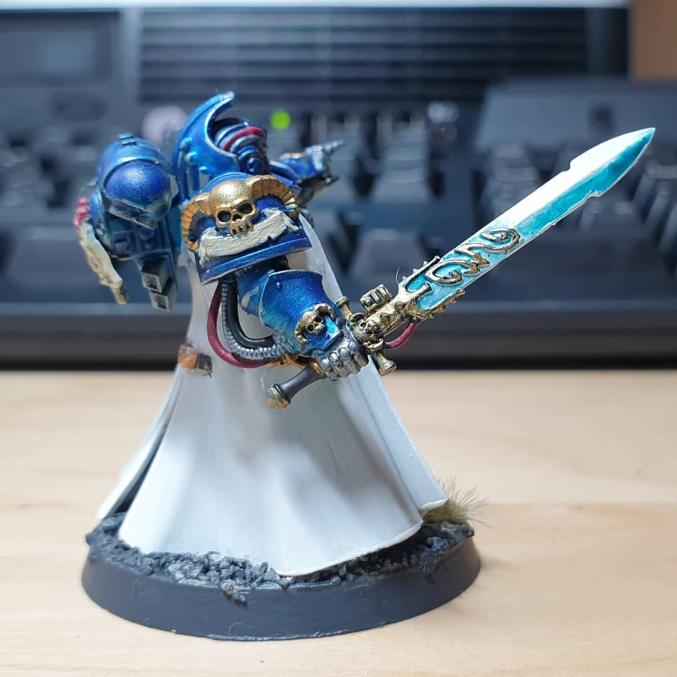 I didn't want to do him in the 'official' yellowy robes and pipes so... I didn't. He's done with Vallejo Transparent Blue glazes over Vallejo Metallic Air Gunmetal. I did my Techmarine gunner for the Repulsor Executioner the same way but with GW Flesh Tearers Red contrast paint.

And a group shot:

I haven't filled in the shoulderpad scrolls on my captain or librarian because I haven't chosen names for them yet. They'll have lots of angular letters in though, I predict

I primed and basecoated my Repulsors today, first in black primer then in Vallejo Metallic Air Black. Next is a super thin spray with Black Templar contrast paint to one down the sparkles and then it's blocking in colours and highlighting. I've never painted a tank before so should be fun although I expect it will take a while. I primed the turrets separately wih white to get the gun casings, then I'll mask them off and give them the same treatment as the base. Til next time o/

Good job on the Primaris Librarian.

Finished the Lieutenant (well, I thought I had but after taking the pictures I noticed i hadn't done the little node things on the sword) and now I'm starting on the Repulsor which is a pretty intimidating thing to paint when you've never painted a tank before 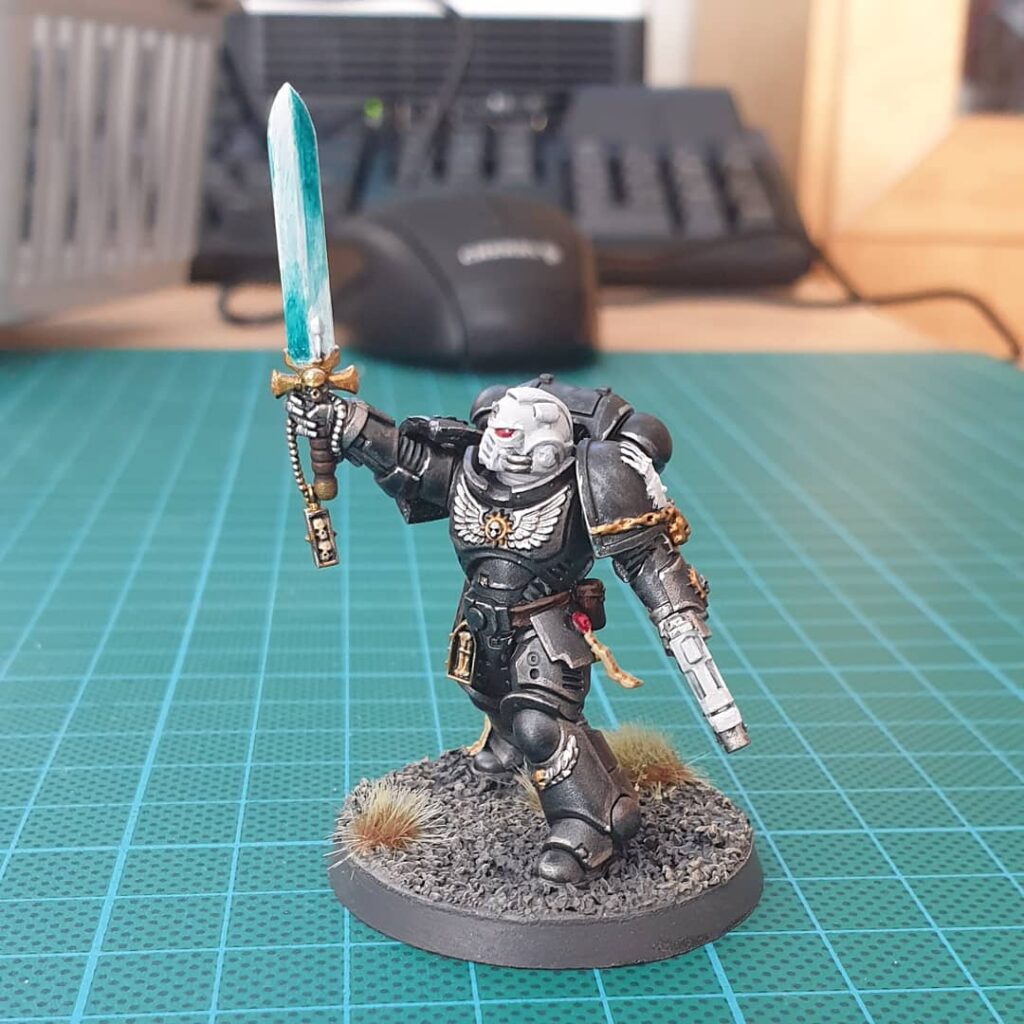 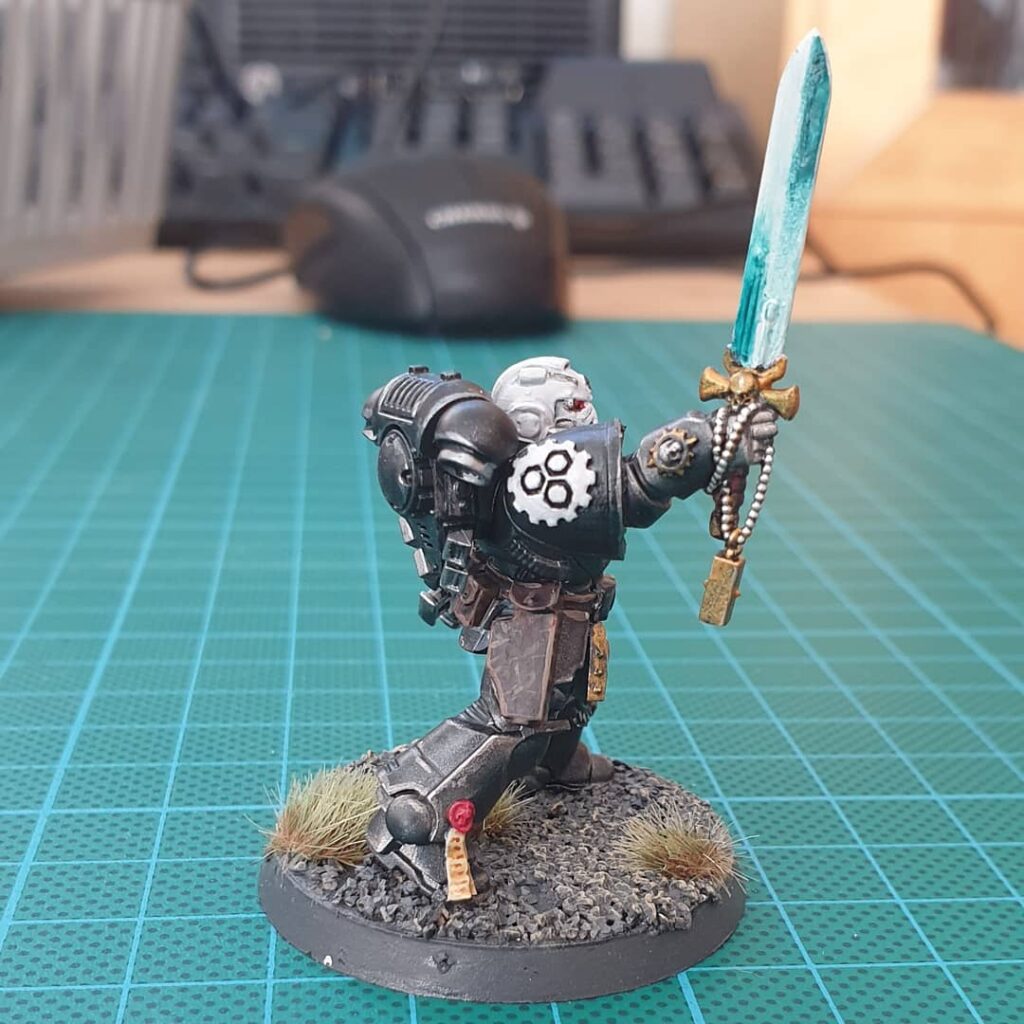 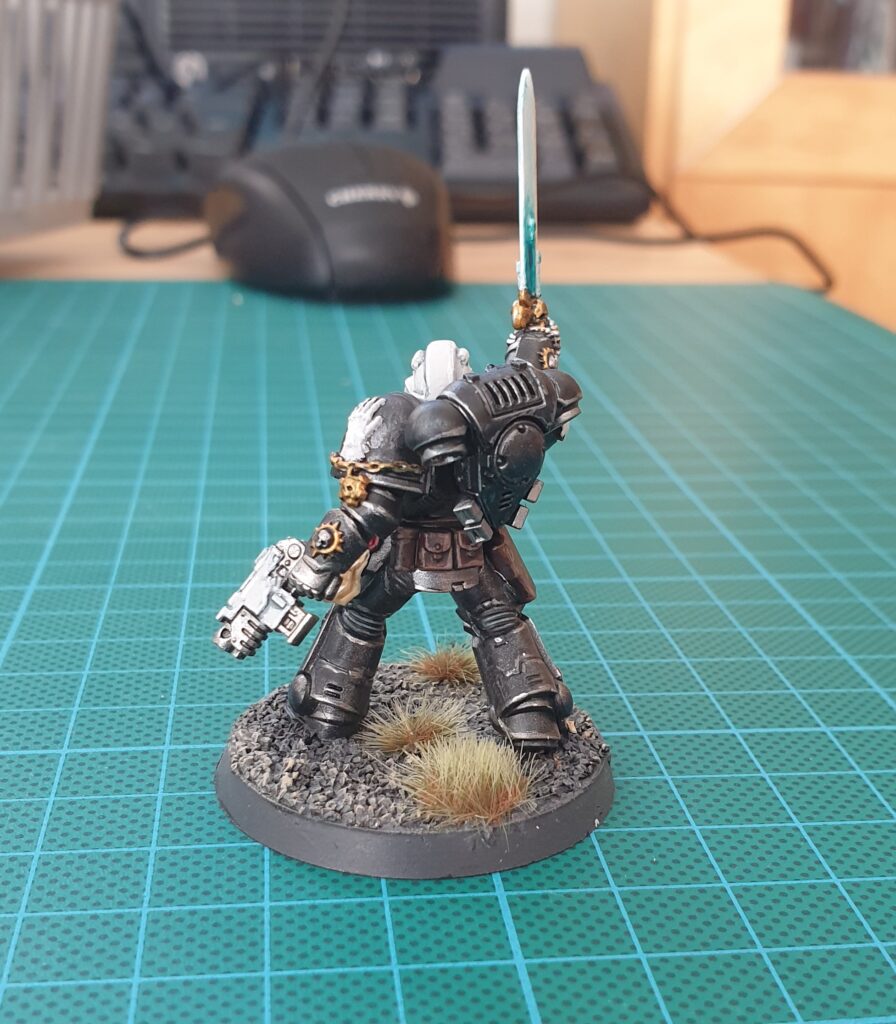 I finished my assault intercessors to a reasonable tabletop standard that I'm happy with, when I'm done with everyhing else I'll try and go back and tidy bits up. Decals will be done en masse when I can bribe my best mate with enough chocolate to do them 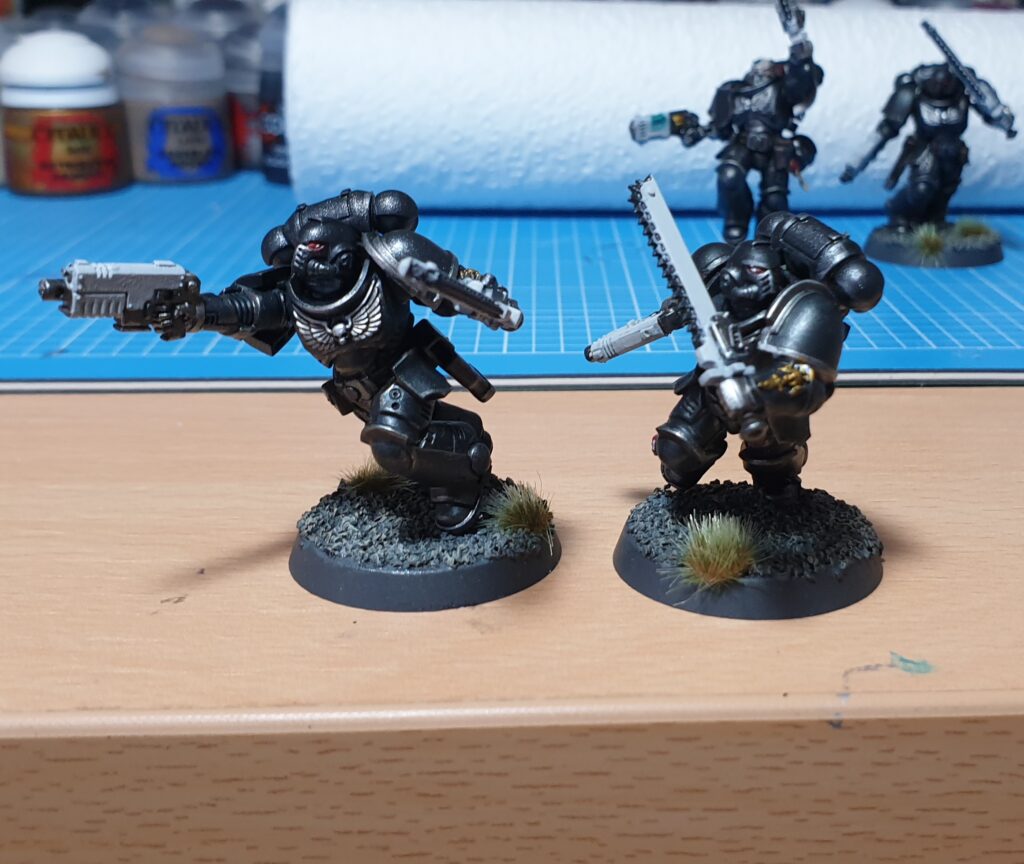 Onto the Outriders and then it'll be the Eliminators next. 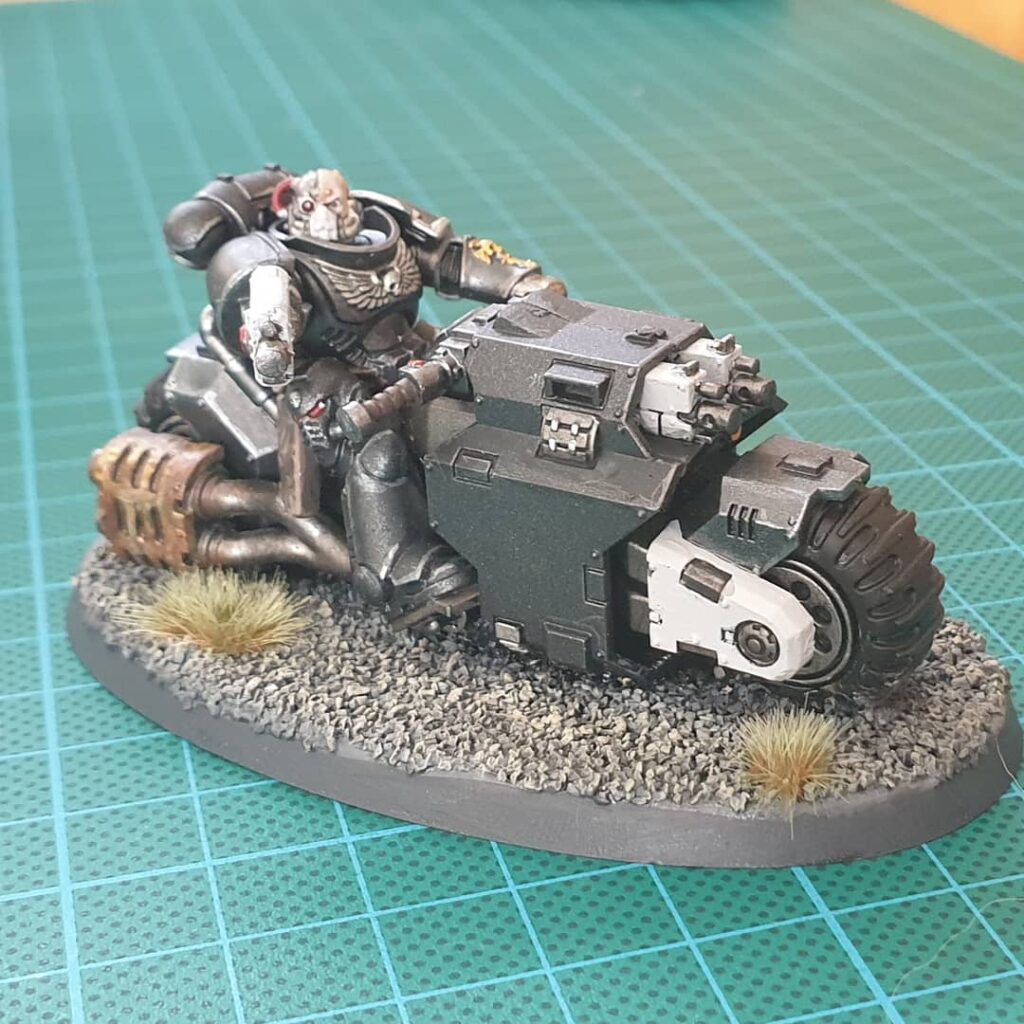 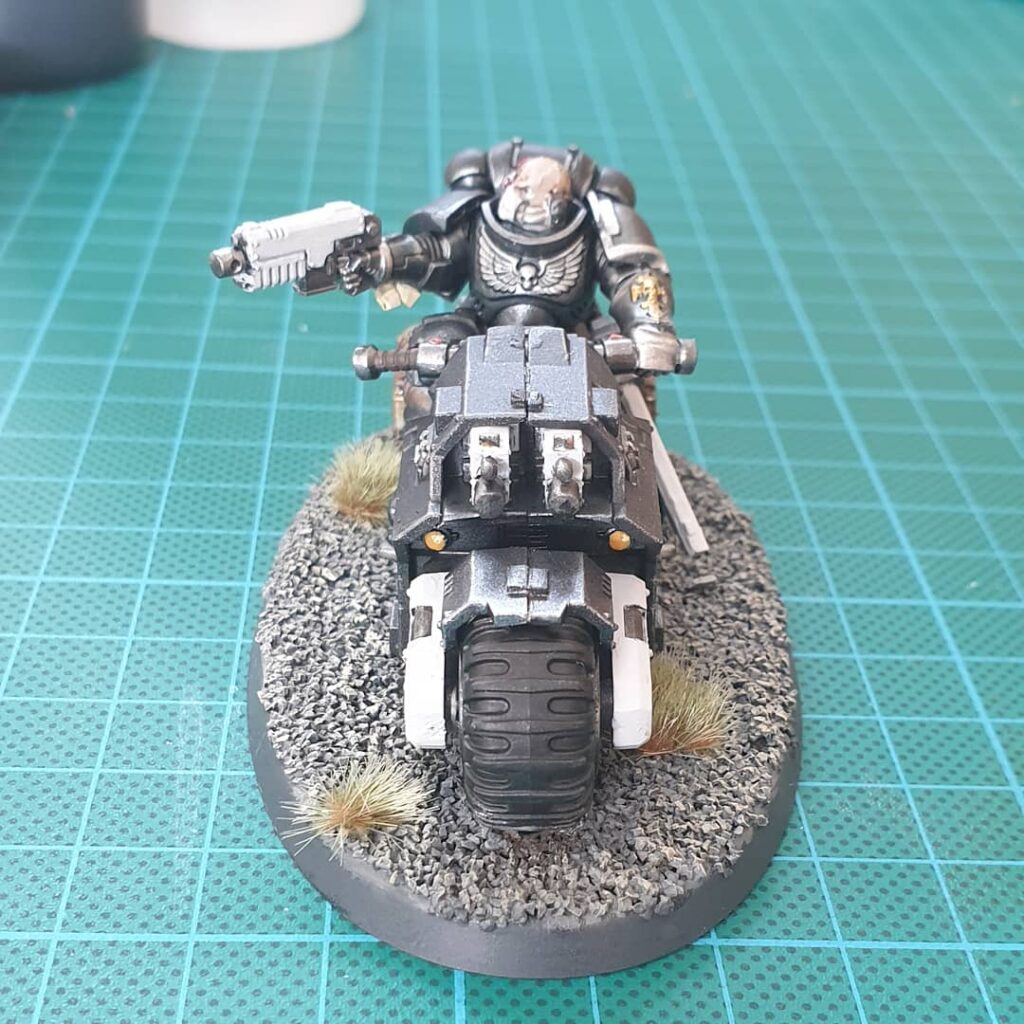 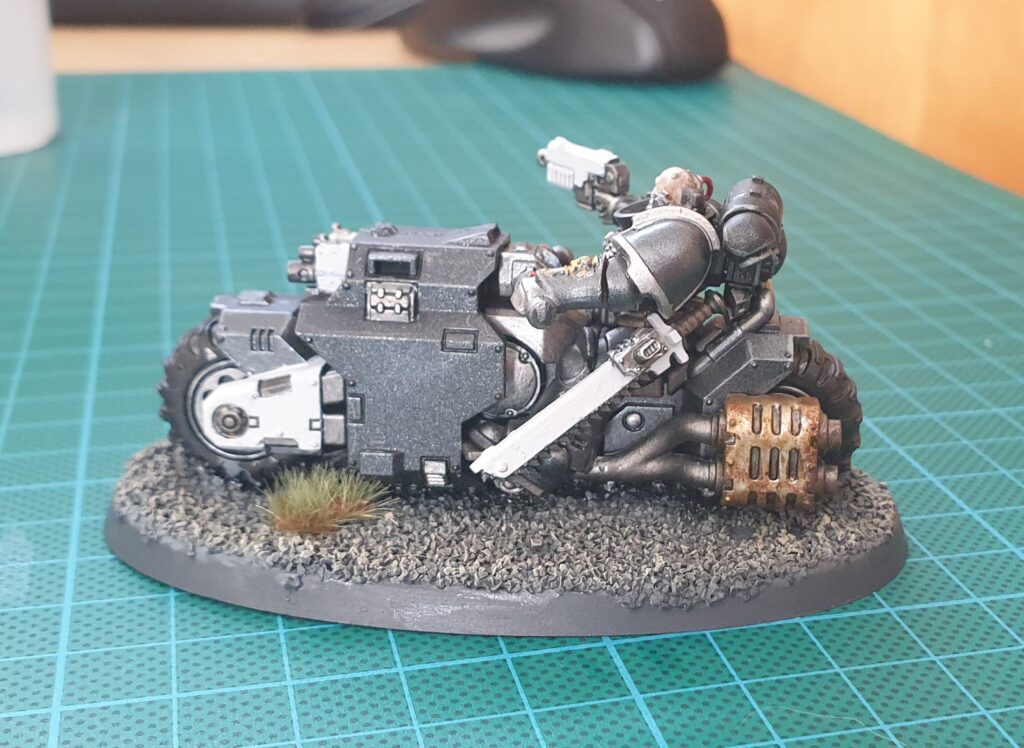 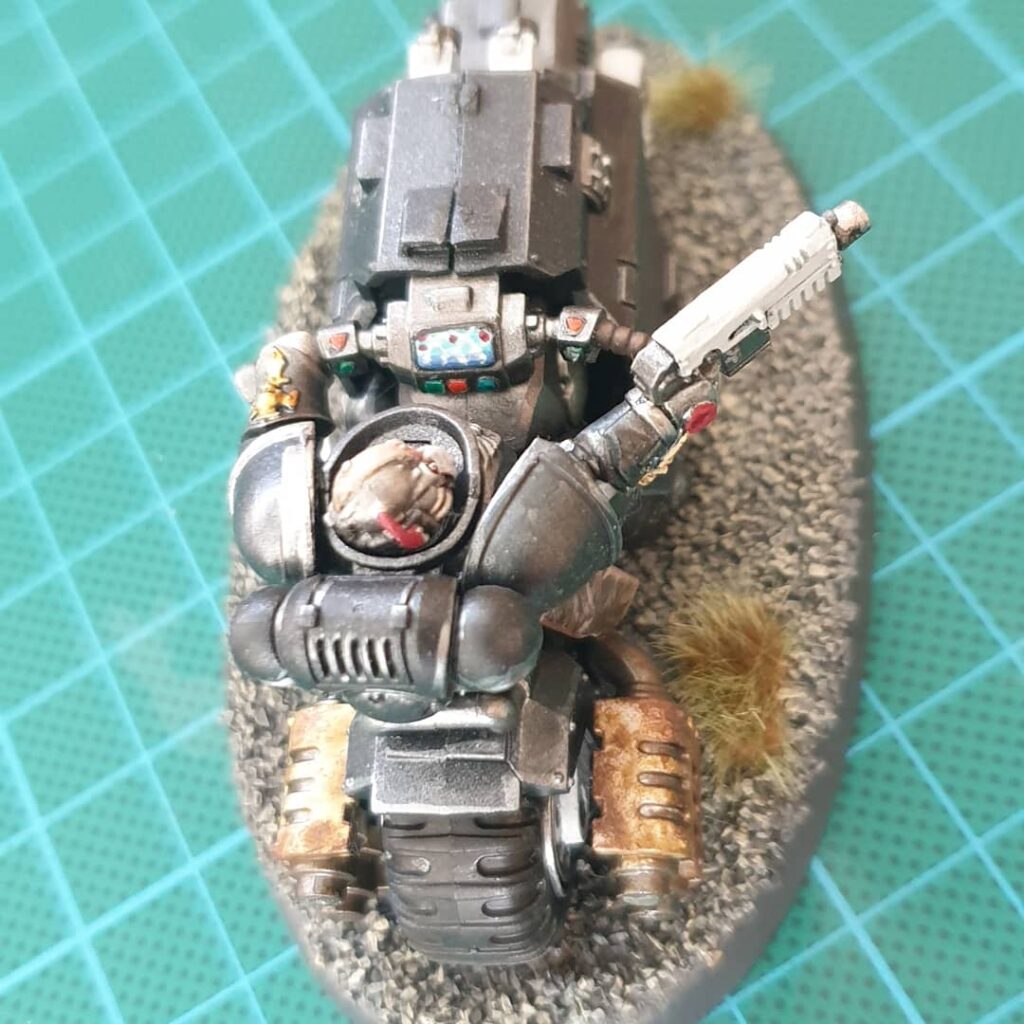 I did the bases for the apohecary and Eliminators too afterwards: 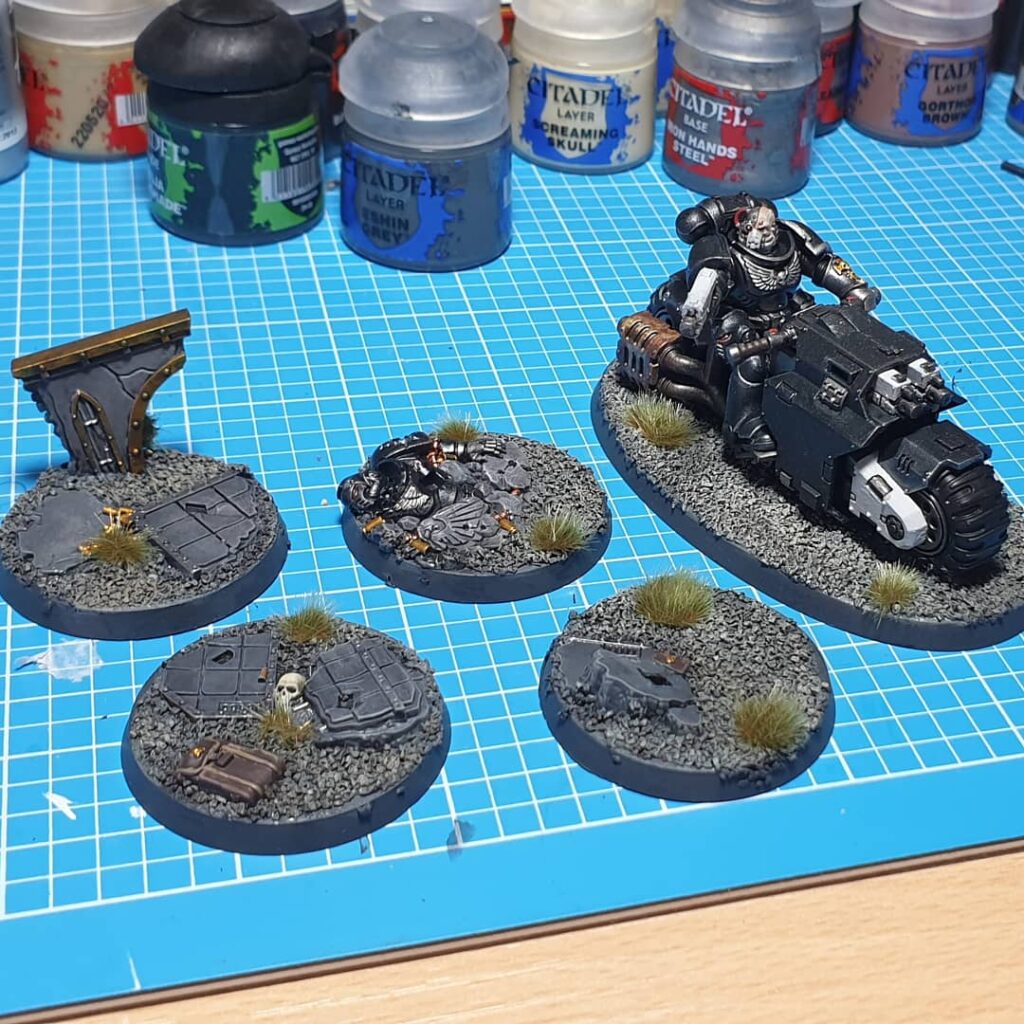 The Outrider is well-painted. Good job on the Marines' bases.

Have been struggling with phantom pain this last few days so not much got done but I did have fun painting the back of one of my impulsors; as an Iron Hands player I don't get to use a particularly broad colour palette so I went a bit mad on all the screens

also did the little skellie just chilling in his shrine. 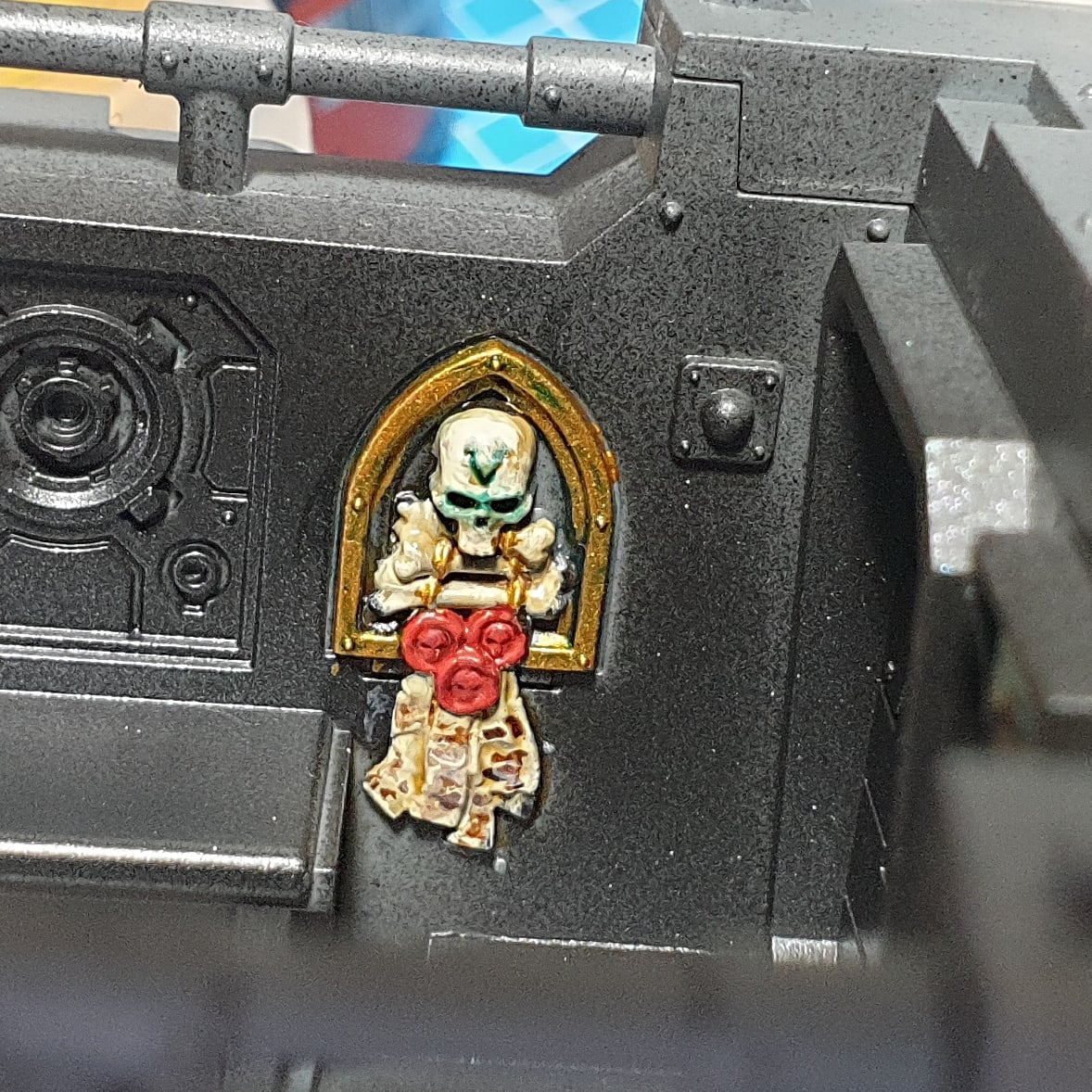 Great job on the radar screen!  That looks fantastic!

I finished the first of a 3 man Eliminator squad late last night, I need to tidy up the rim but was so knackered after taking he photos I went straight to bed. I've tried to use an acive camo style; am still on the fence about it but others seem to like it. 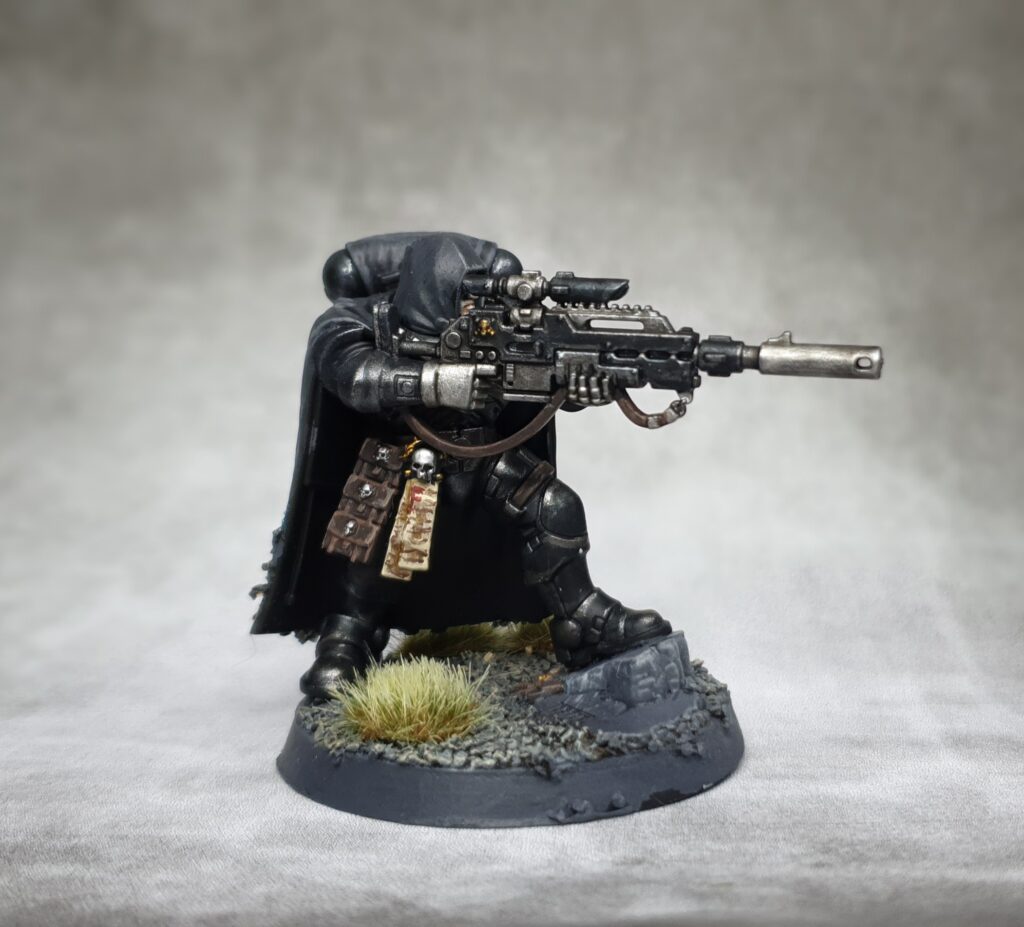 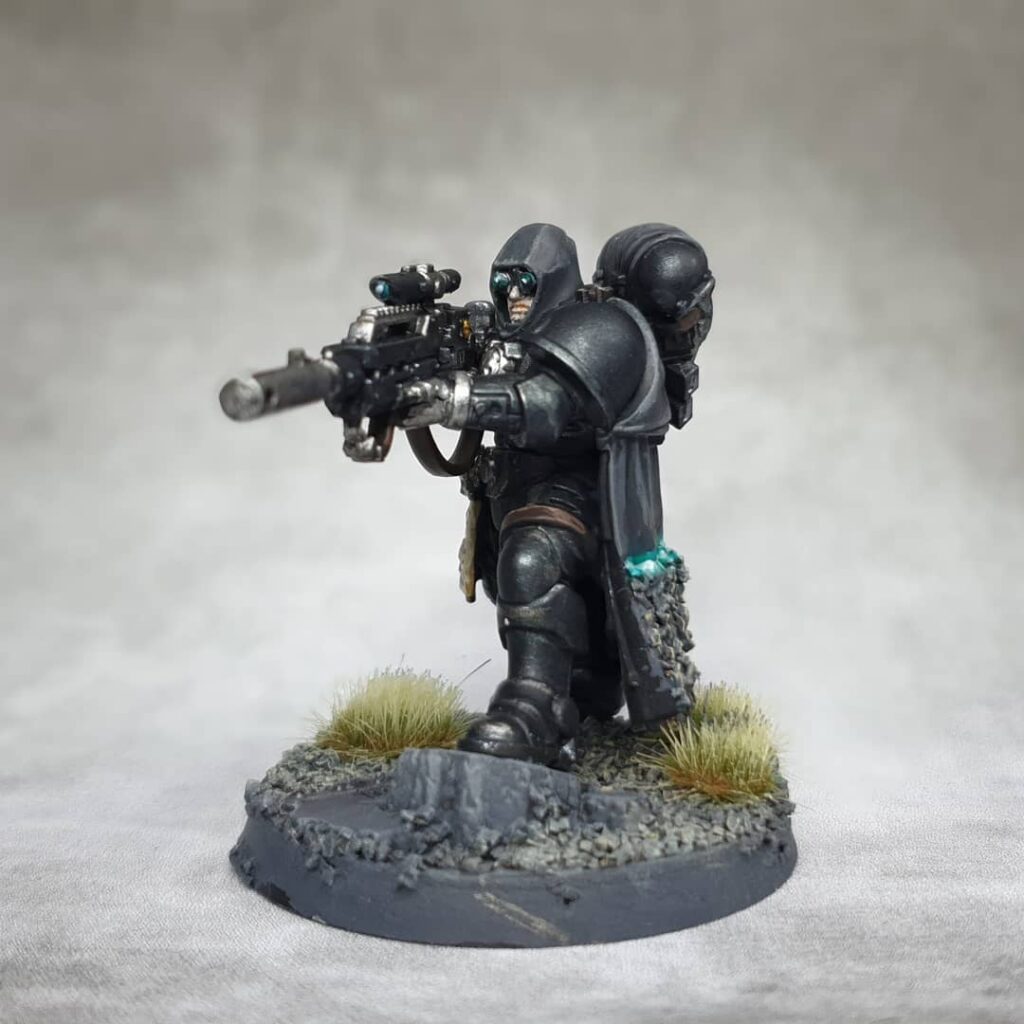 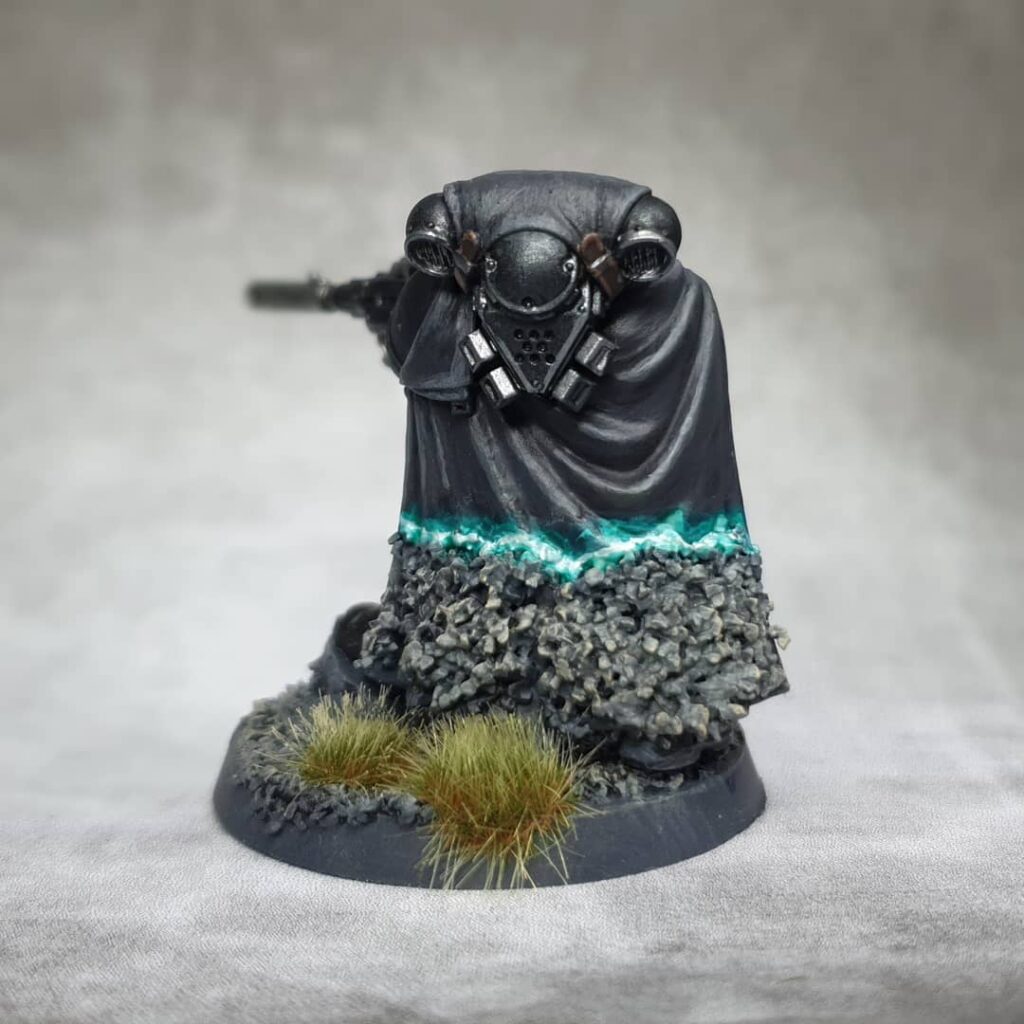 Oh yes, none of my unis have decals on, I'm waiting for enough of them to be finished to 'batch decal' the lot. I'm also aware that IH have white weapon casings but that seemed a bit odd for snipers so I did them in the same colour as the armour.

Good job on the Eliminator. I'm impressed with your efforts to make the camo cloak look as if in mid-transformation.

Outriders are finished. Finished the Eliminators; used beach sand on two of hem which seemed to work beter than basing sand. No sure what's next, I might varnish all my tanks while I still have access to an airbrush (I've been staying at my best mate's house in Cornwall who has kindly assembled everyhing excep the pushfit stuff for me and I'm going home on the 1st). 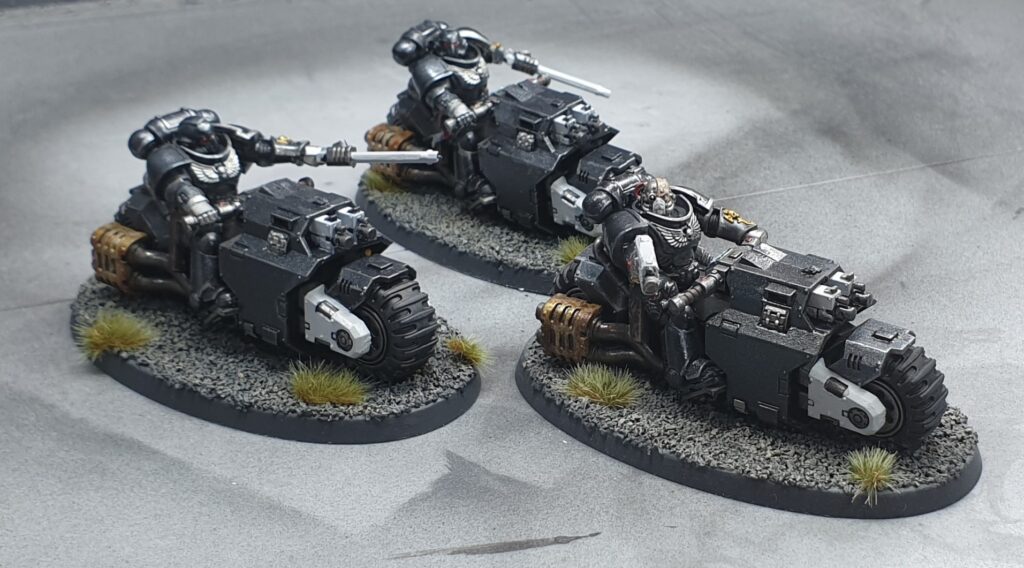 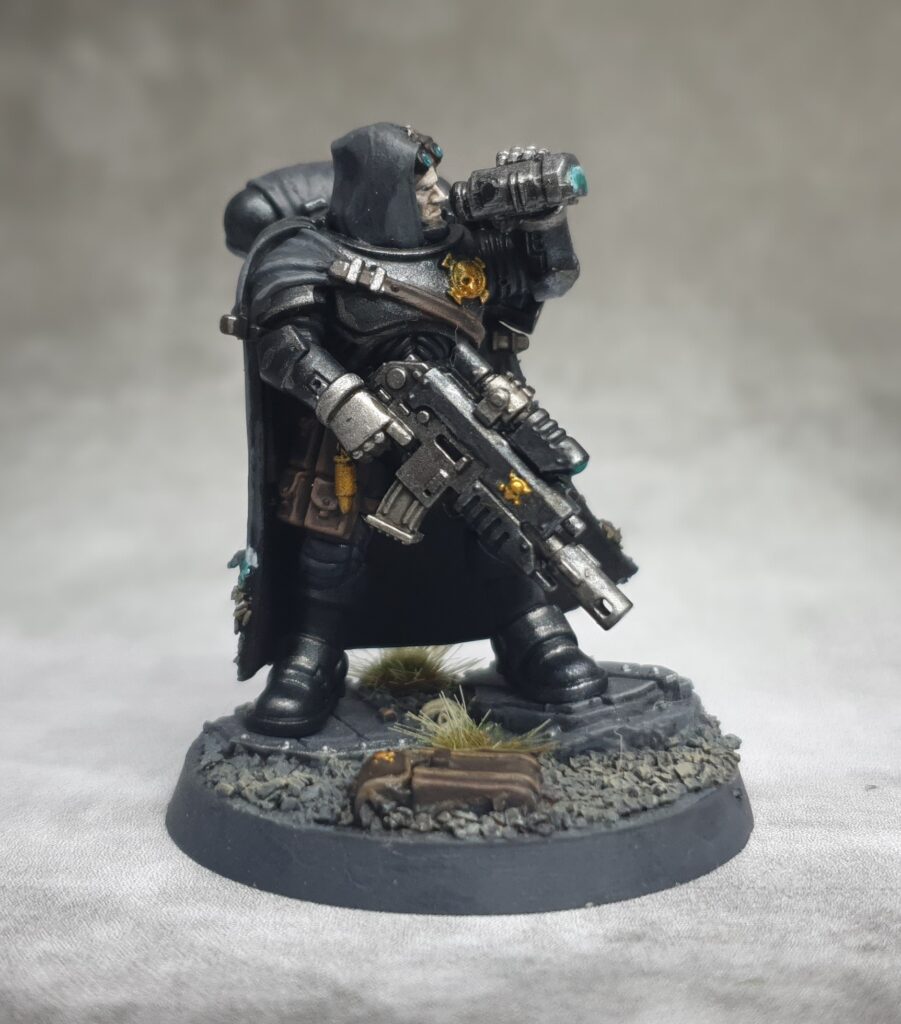 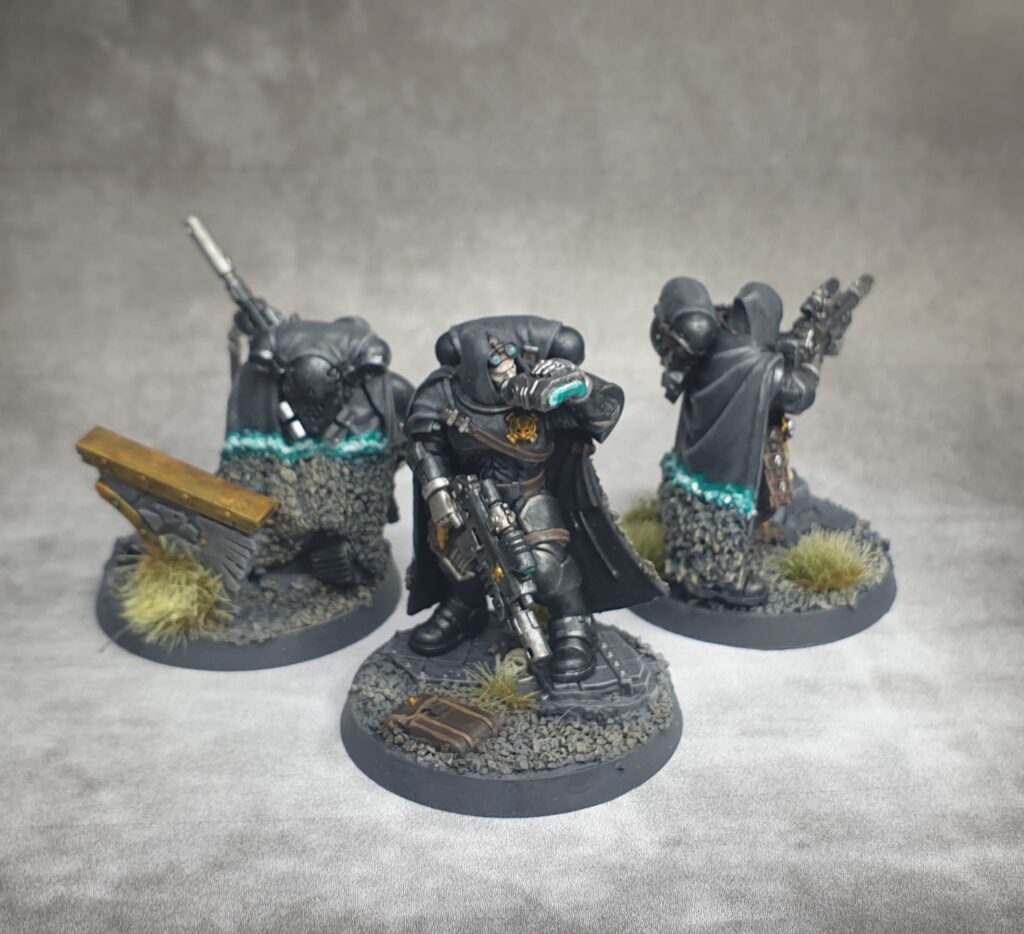 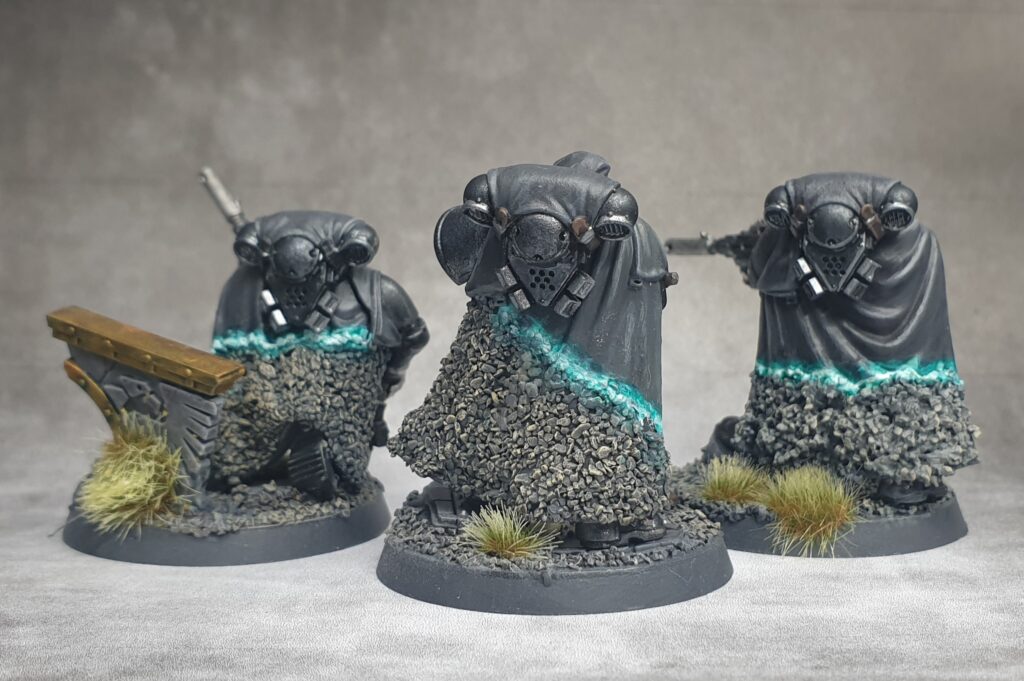 Your models are modelled and well-painted.

Reasons to use the Steel Crusaders ('Codex: Space Marines' supplement) or the Iron-hearted Angels ('Codex: Blood Angels' supplement): Because you think giving Sternguard Veterans a heavy bolter wtih special issue HEAVY BOLTER ammunition is ALMOST as much fun as shoehorning an Earthshaker cannon into a Land Raider.
Back to + IRON HANDS +


5 user(s) are reading this topic