The final battle of the round.

The war for Exelia Tertius draws to an end.

The Wings of Dawn have accomplished their goal. They now fall back —injured, but whole— to a district deep in their own territory, to be extracted.

The Sons of Rust cannot allow this to happen. They now abandon their own foothold in the city to give chase to the bleeding Astartes. They are freshly maimed after their encounter with the Necron Vizir, and ready for the killing blow.

First, though, they must manage to traverse the central district of the city. The nexus of Exelia Tertius, from which the roads to their prey spring forth. A place which is overrun with the hunters of the great Khan; as he makes his own final march against the one force he is yet to conquer in the city: The Vizir's necrons themselves.

It is a dangerous place to cross; but corss it they must. 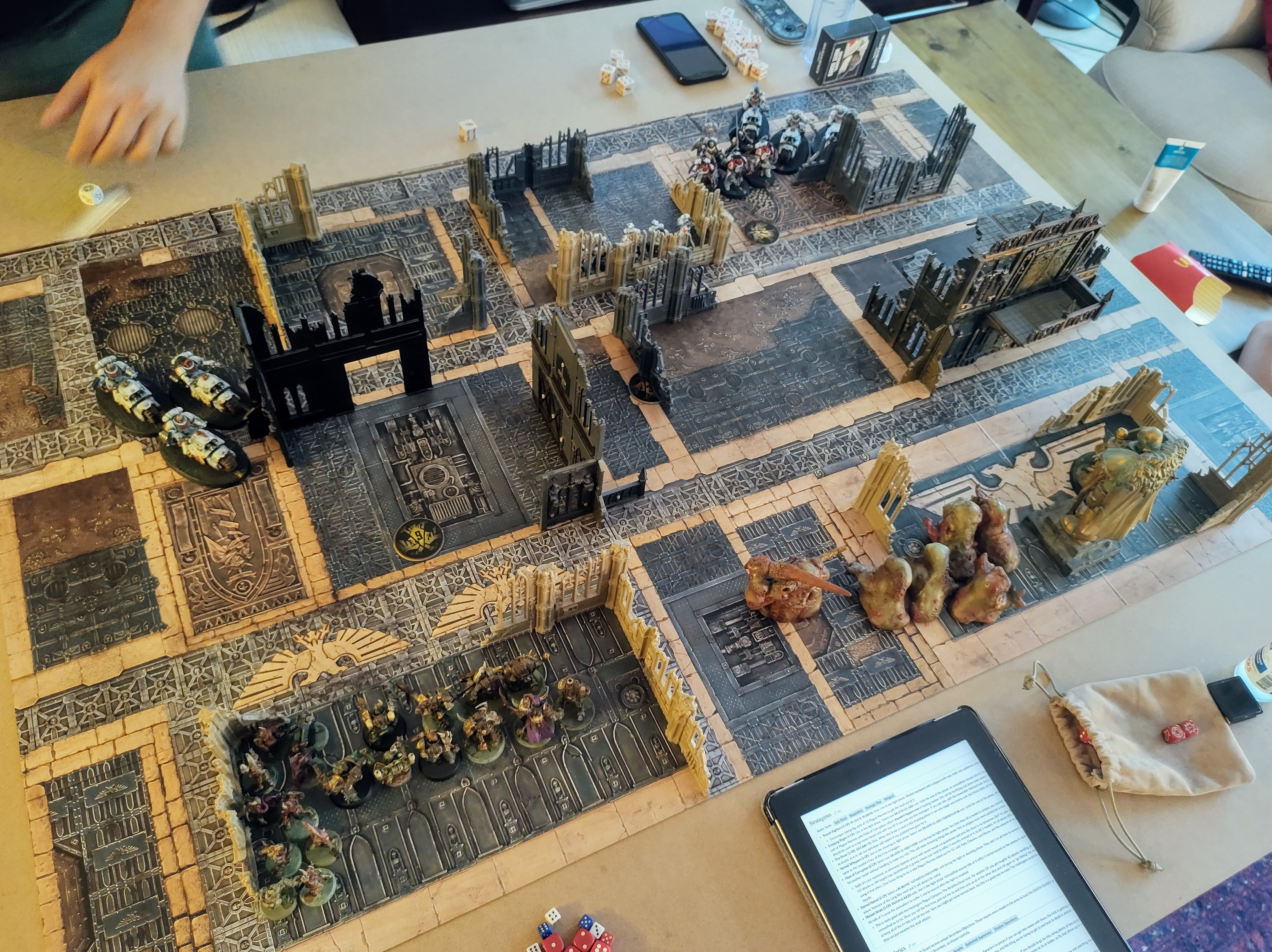 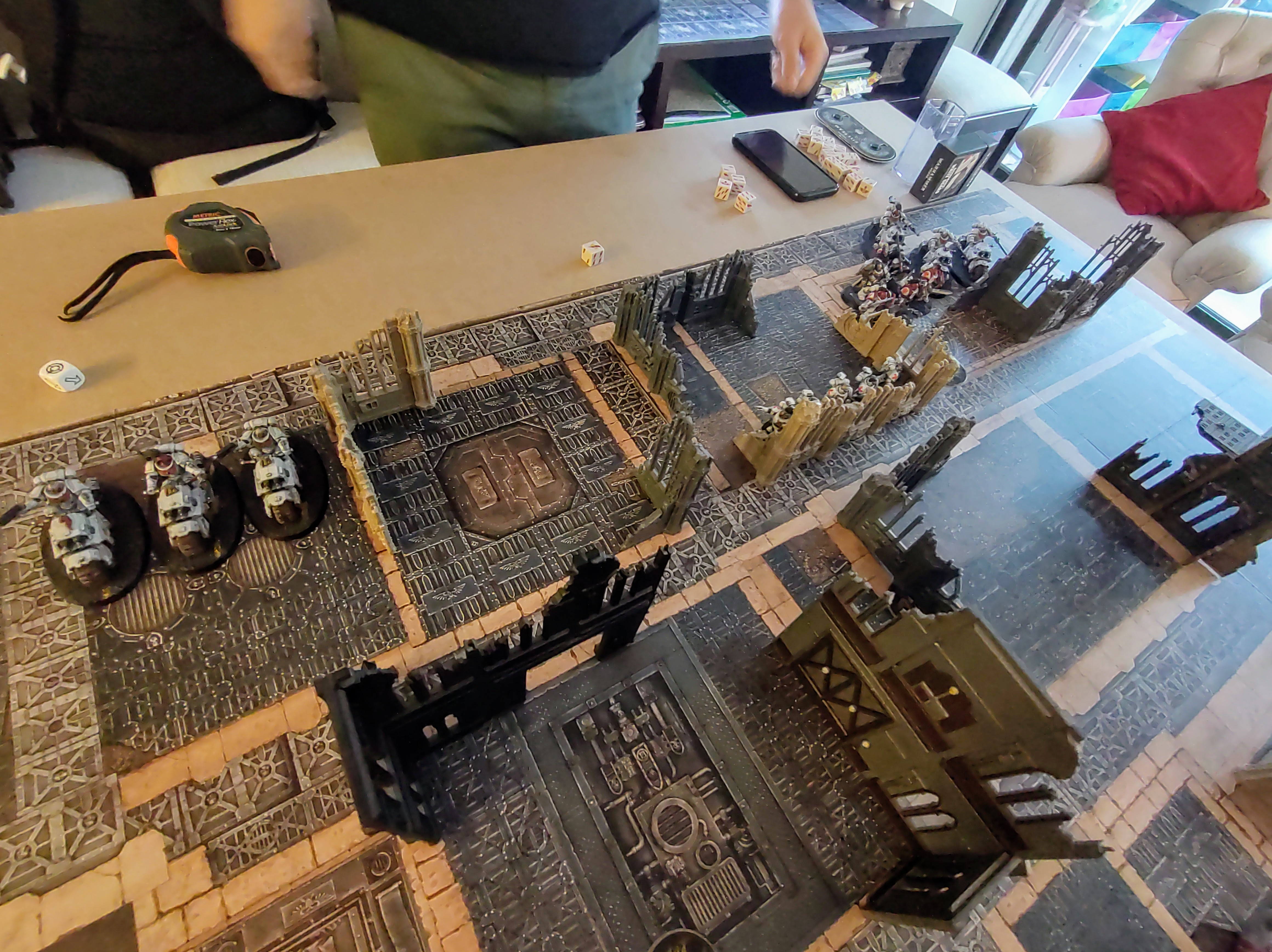 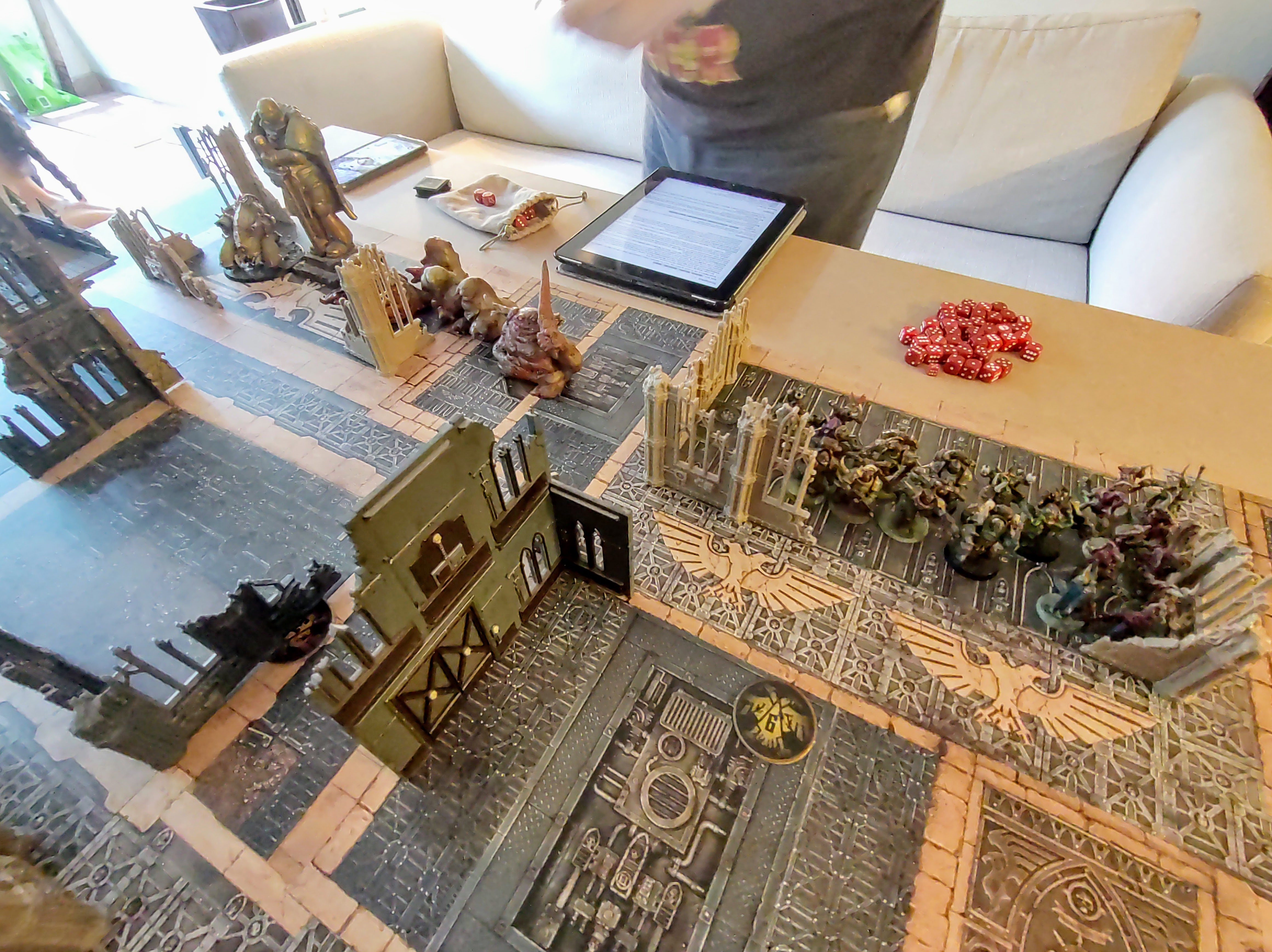 The White Scars have the initiative and fall hard on the Sons of Rust. Slaying three Plague Marines with combined bolter fire, and locking down two objectives on the battlefield with Incursors and Bladeguard.

The Sons of Rust strike back with a slow march and a heavy rain of firepower against the sword and shield Astartes, who see one of their brethren fall. This, as an opener to a charge from a group of Chaos Spawn and their leading Demon Prince. 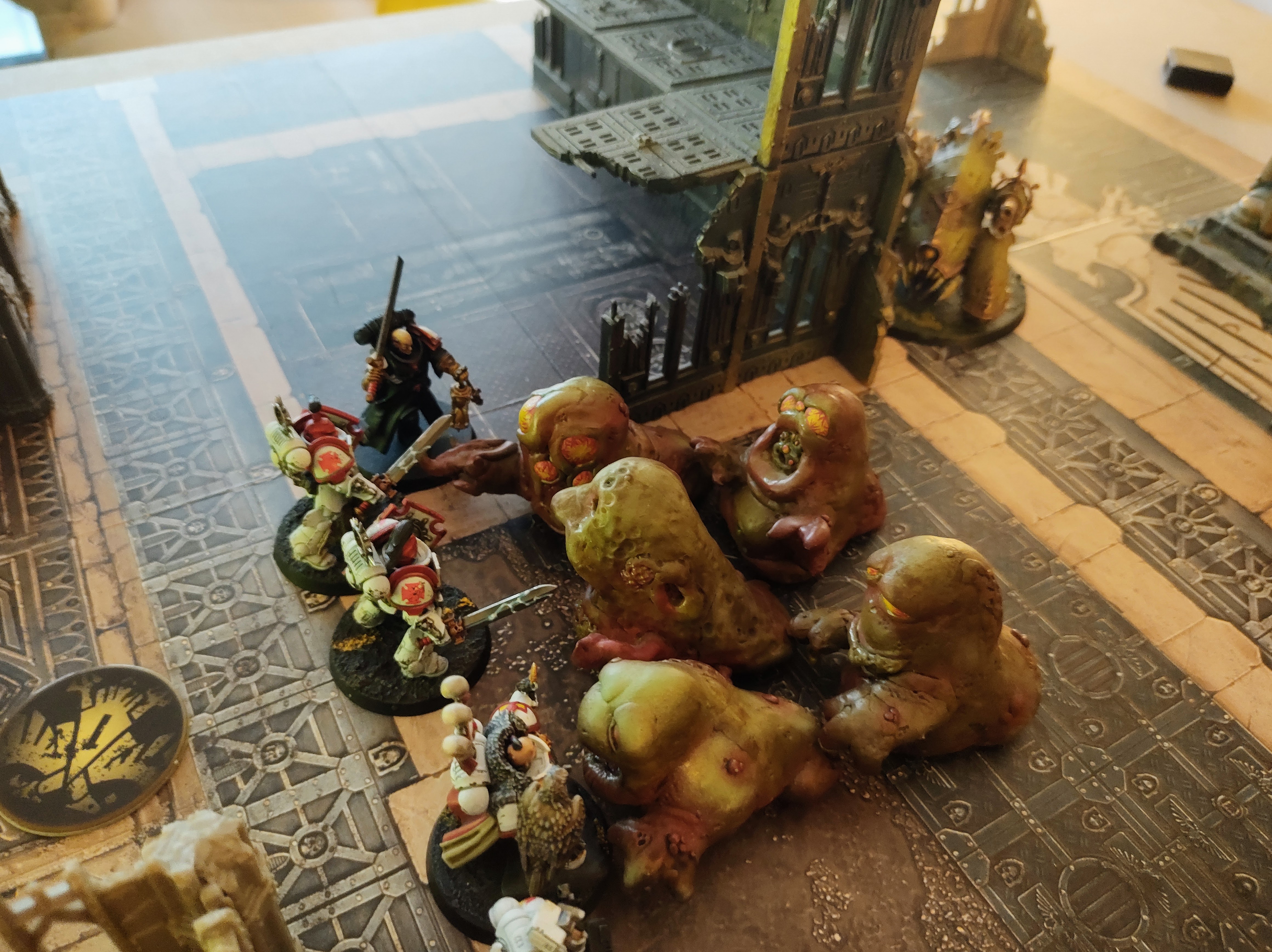 The Judiciar of the White Scars makes the monsters fight last, however, and they are taken out almost entirely before they can make a single attack. 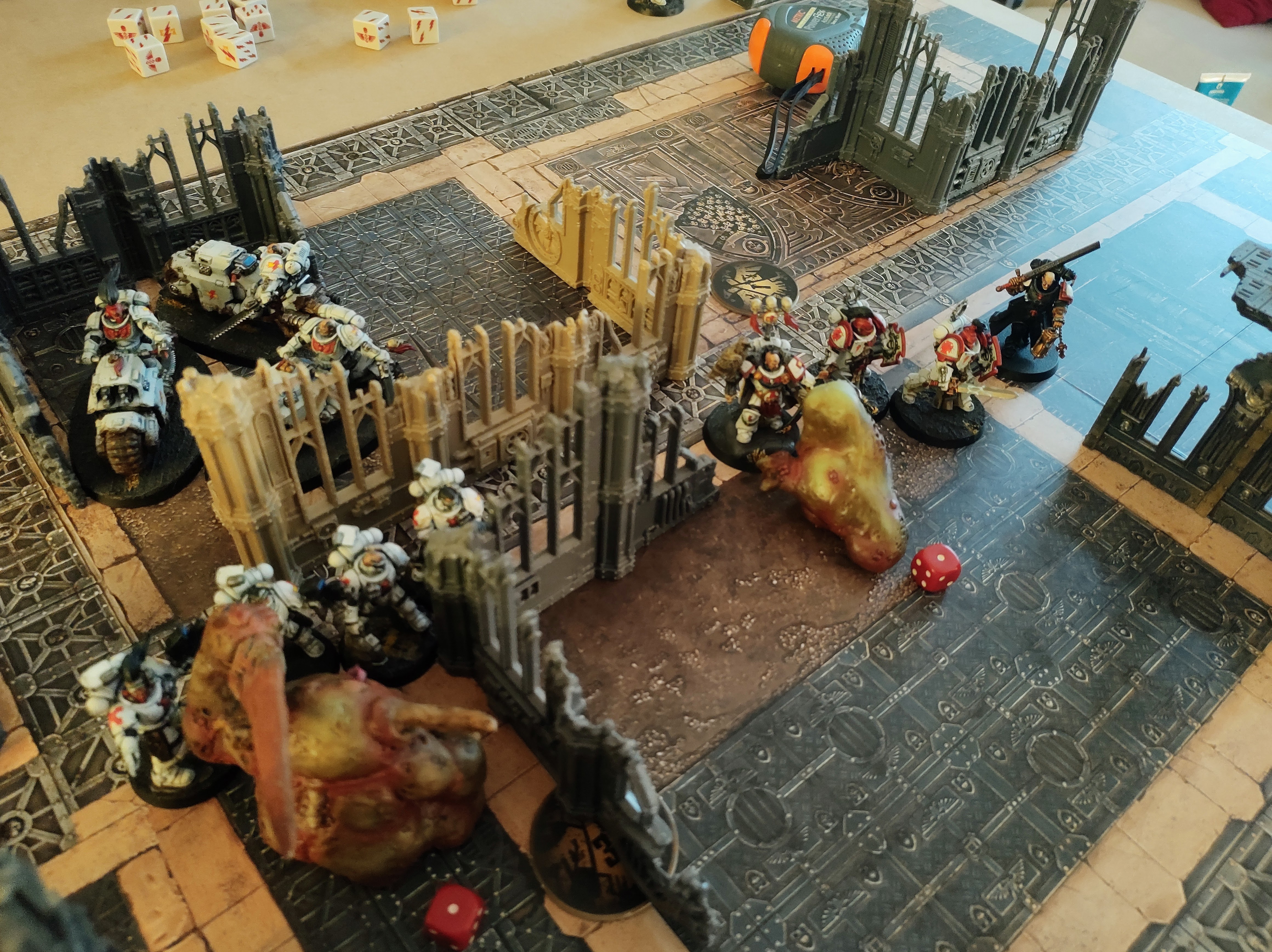 The White Scars take the fight to the heretics, by charging into their lines and cleaving through the chaos infantry. 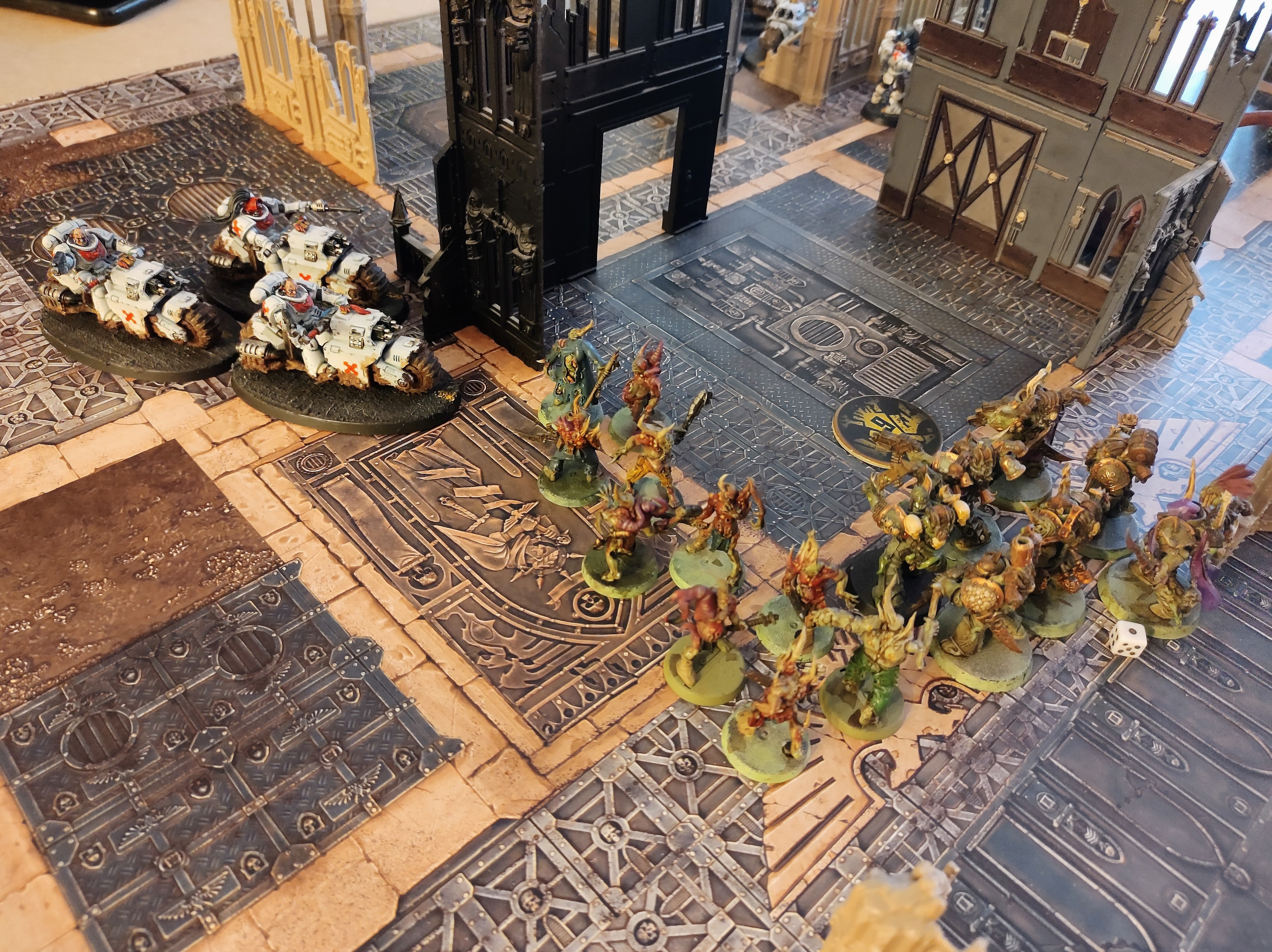 The ensuming melee is quick, swift, and bloody, with marines falling every which way, and Chaos Demons meeting a similar end. 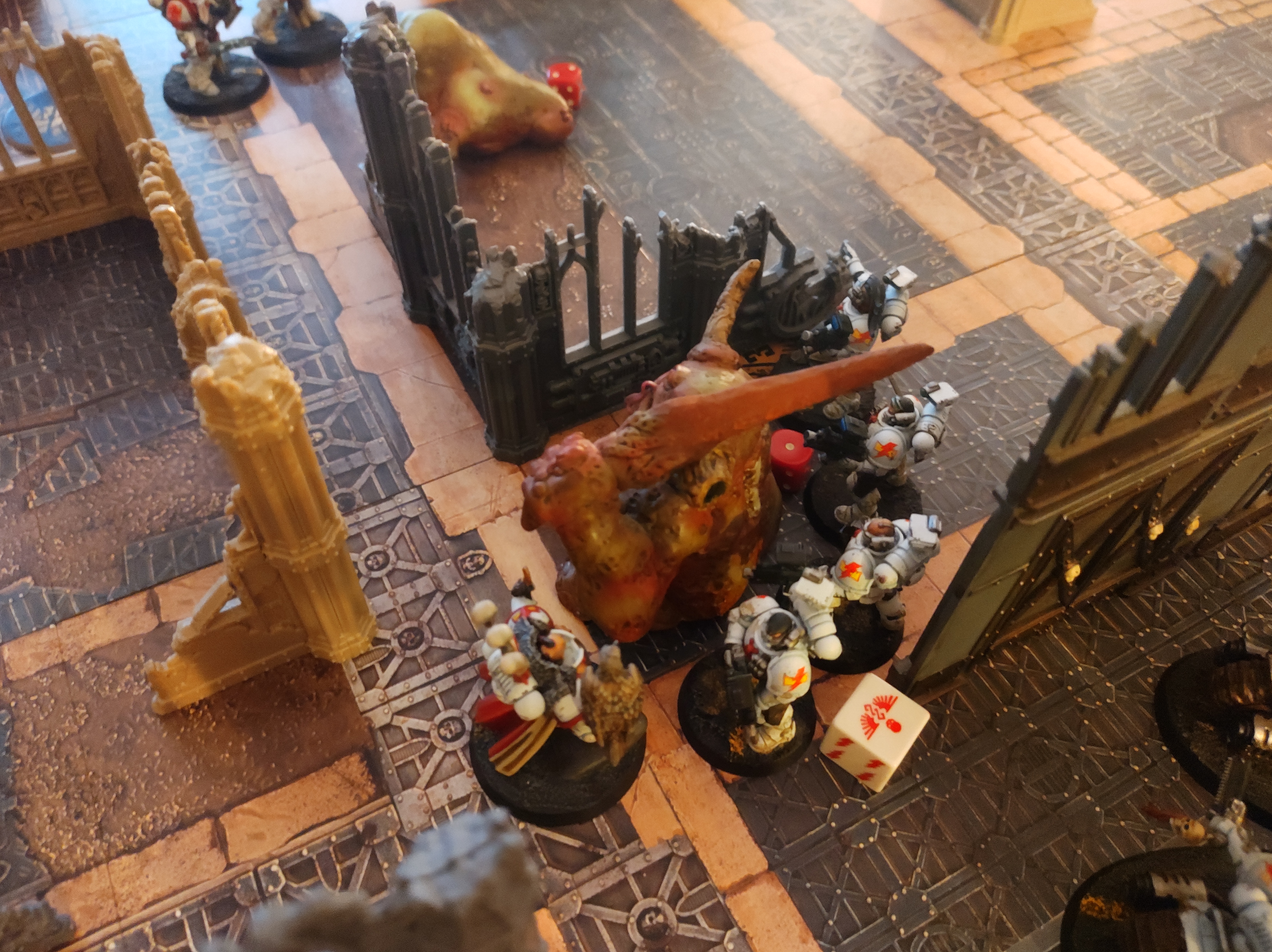 With the upper hand, despite heavy losses, the White Scars make a turn for the last few units of the Chaos Army, and by taking them out from the battle they fulfill their deadly agenda, and claim a quick victory for the glory of the Chapter. 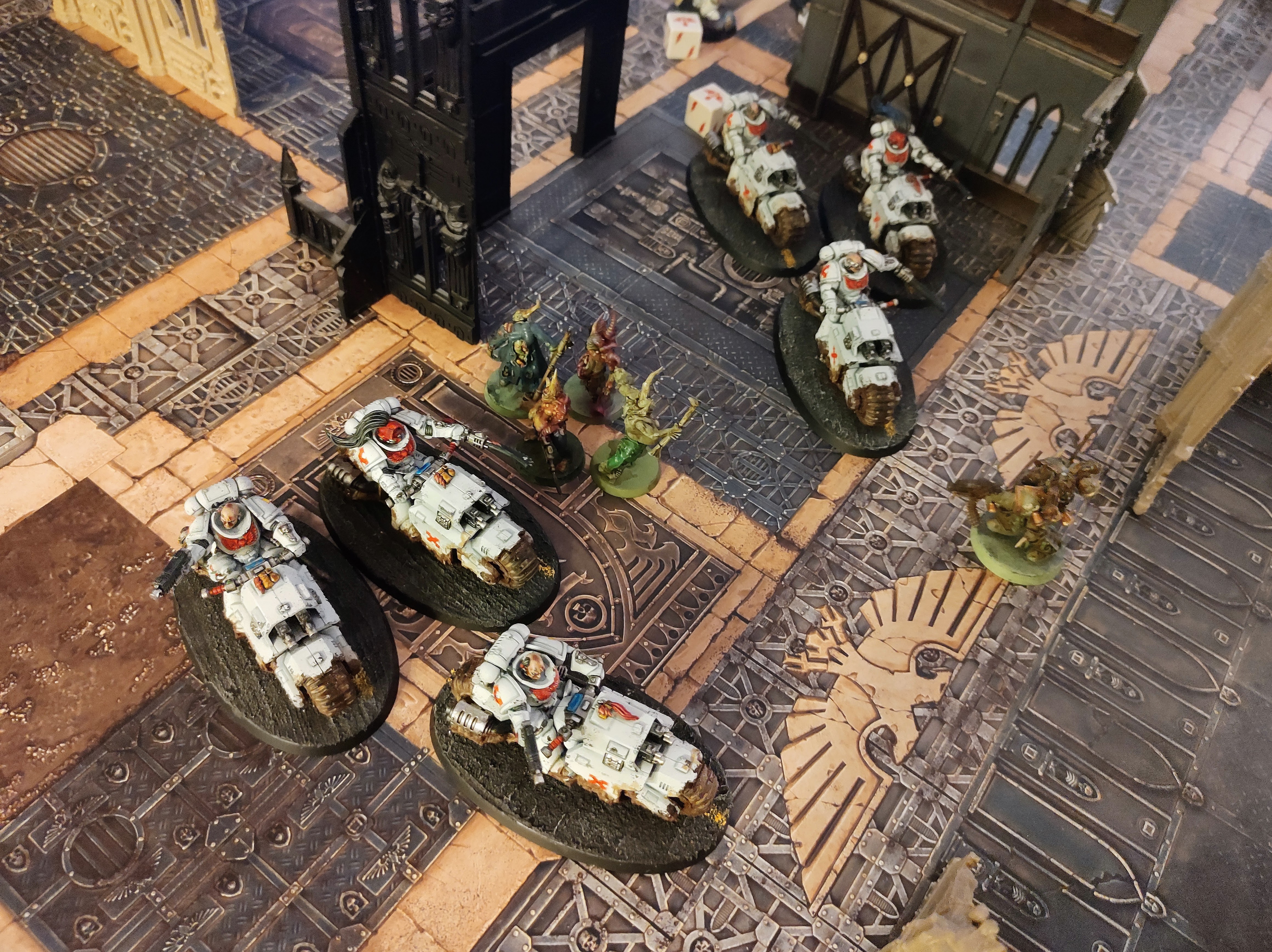 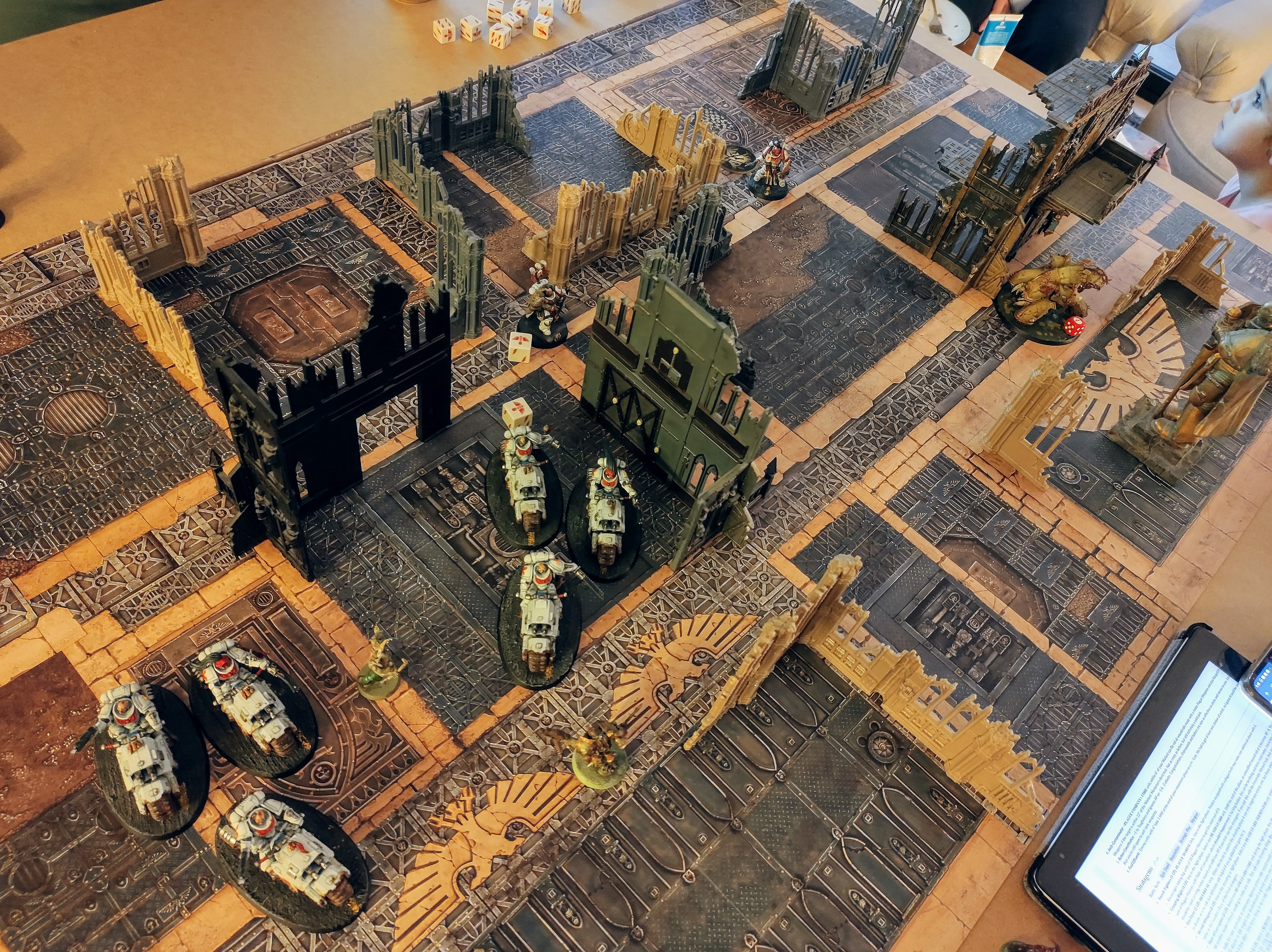 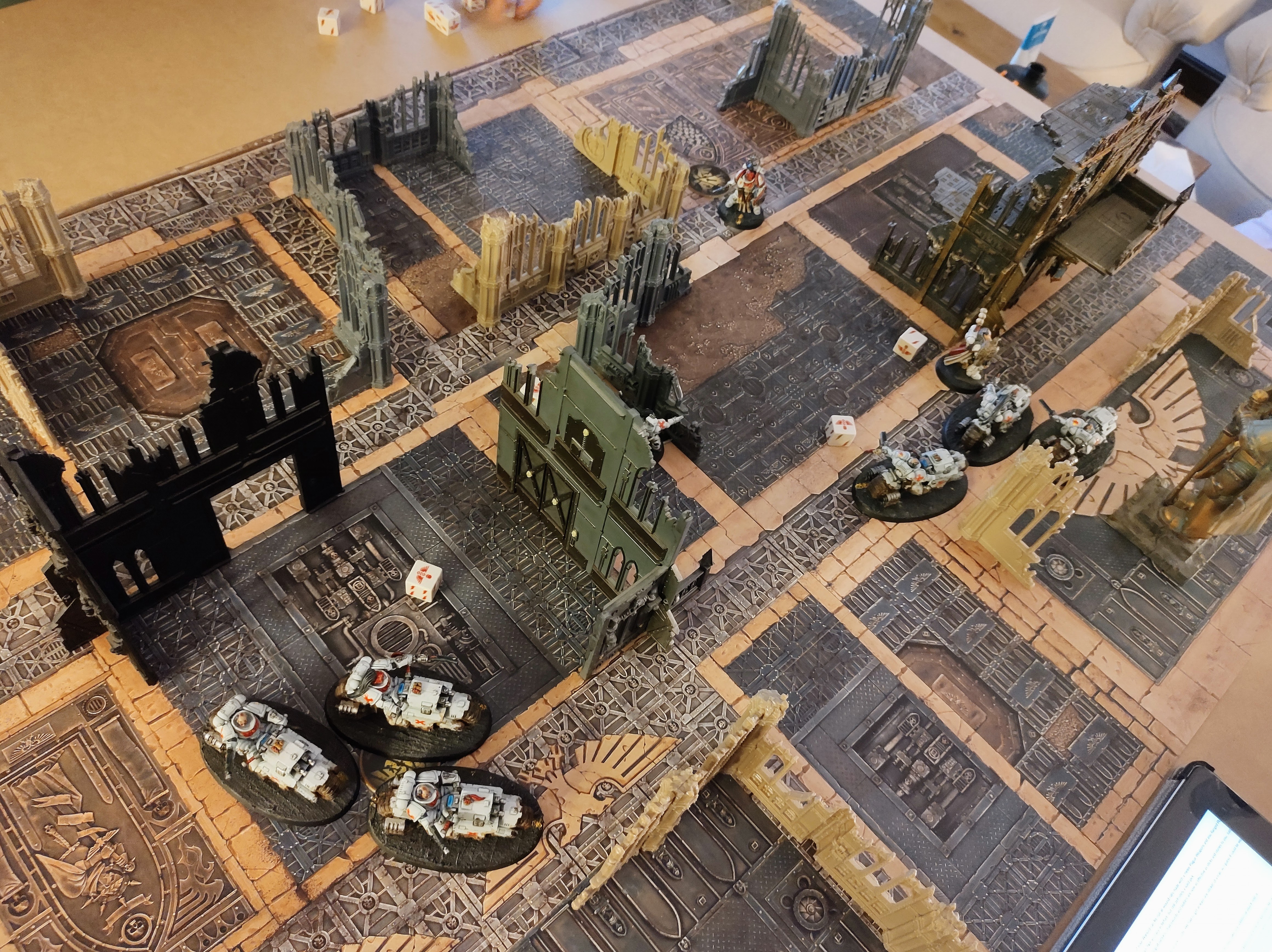 END RESULT: Victory by tabling on round three for the White Scars. +4 GLory Points to them for their victory.

With this last battle, we finished round three of the Campaign.

We are now officially tallying the results, and moving on to the final battles to close the narrative.

Territories were conquered, as follows, with 8 for the necrons, 7 for the white scars, 5 for the wings of dawn, and four for the sons of rust: 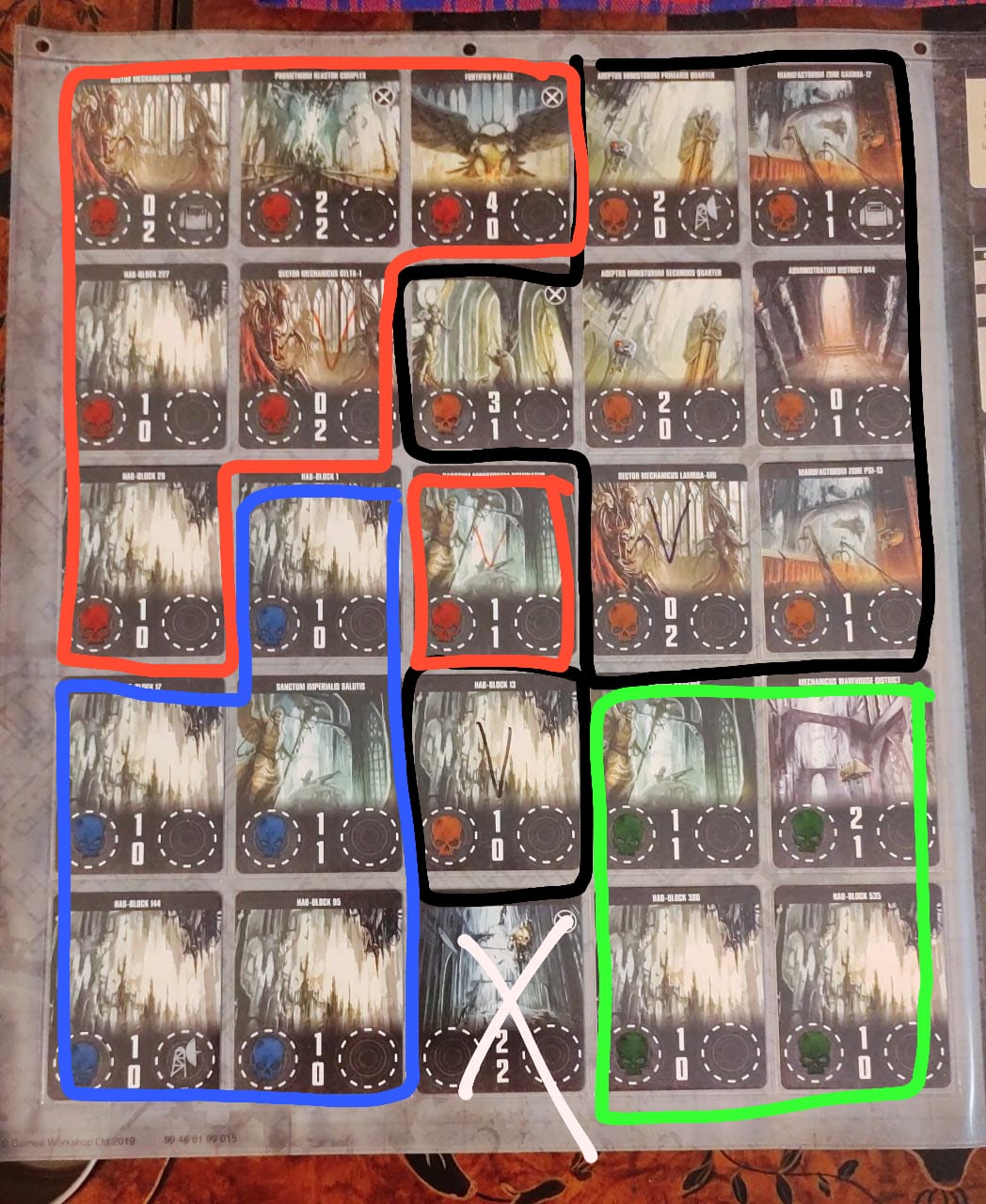 After counting campaing points per conquered districts, we were left with a ranking of 28 points for the necrons, 24 for the white scars, 18 for the wings of dawn, adn 15 for the sons of rust. 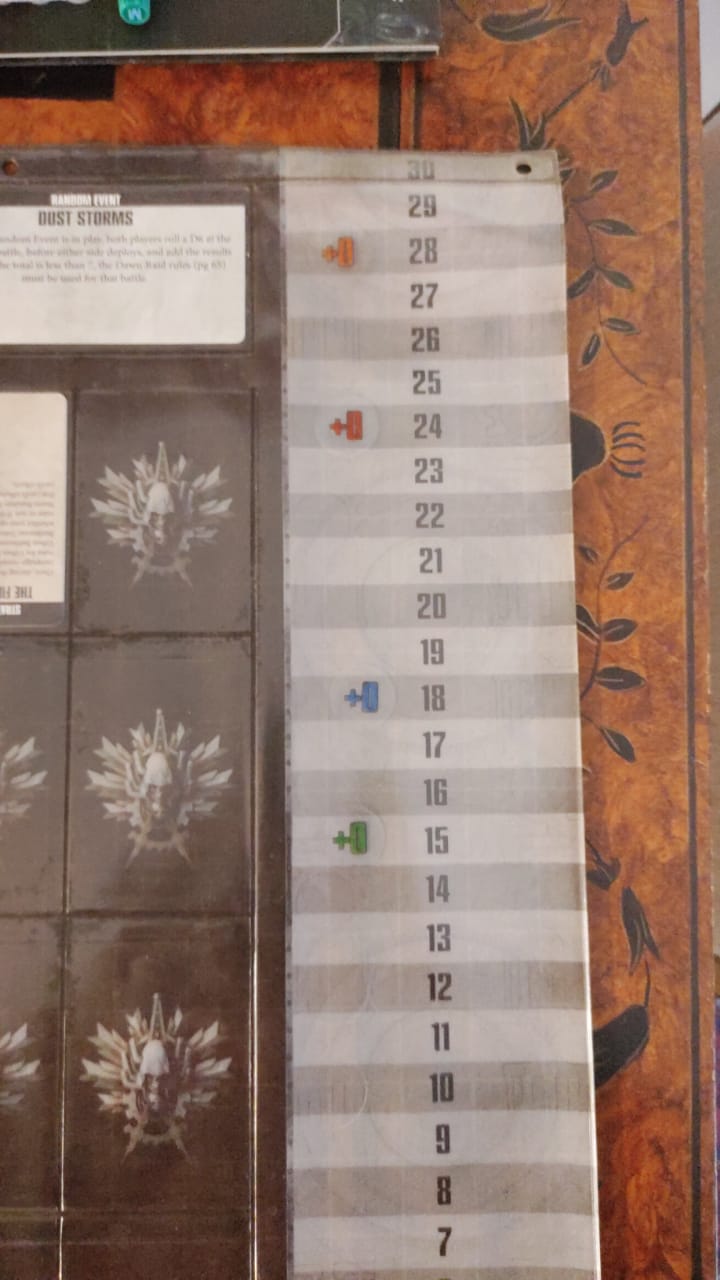 Once glory was calculated, the initiative order for the round's end was of the white scars with 8 glory, the necrons with 5 glory, the wings of dawn with 3 glory, and the sons of rust with 1 glory. 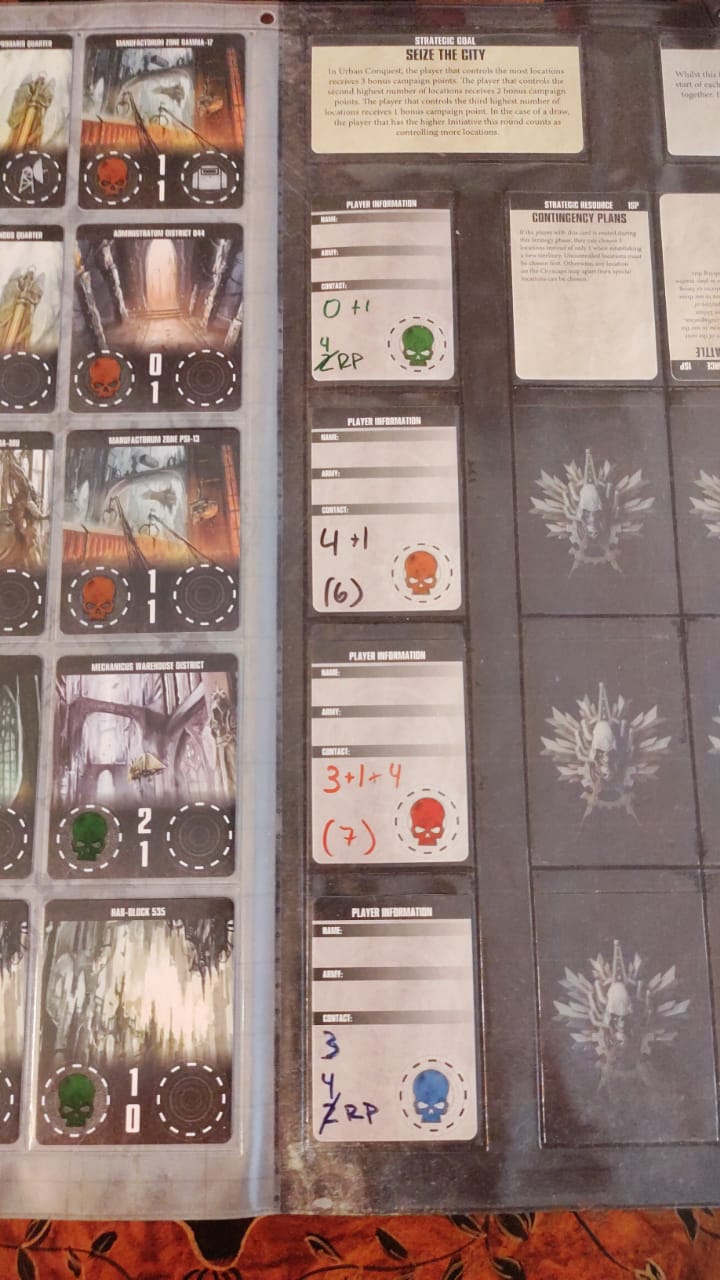 With that, we took appart the ONLY strategic resource cards that COULD be used for anything in this end-round, and went after those in order of initiative.

The white scars took a D6 extra campaign points, then the necrons took a D3 extra campaign points. The wings of dawn took the chance to choose the Random Event for the final battles. The Sons of Rust were left with stealing some glory points, but that was useless by that point so we just moved on. 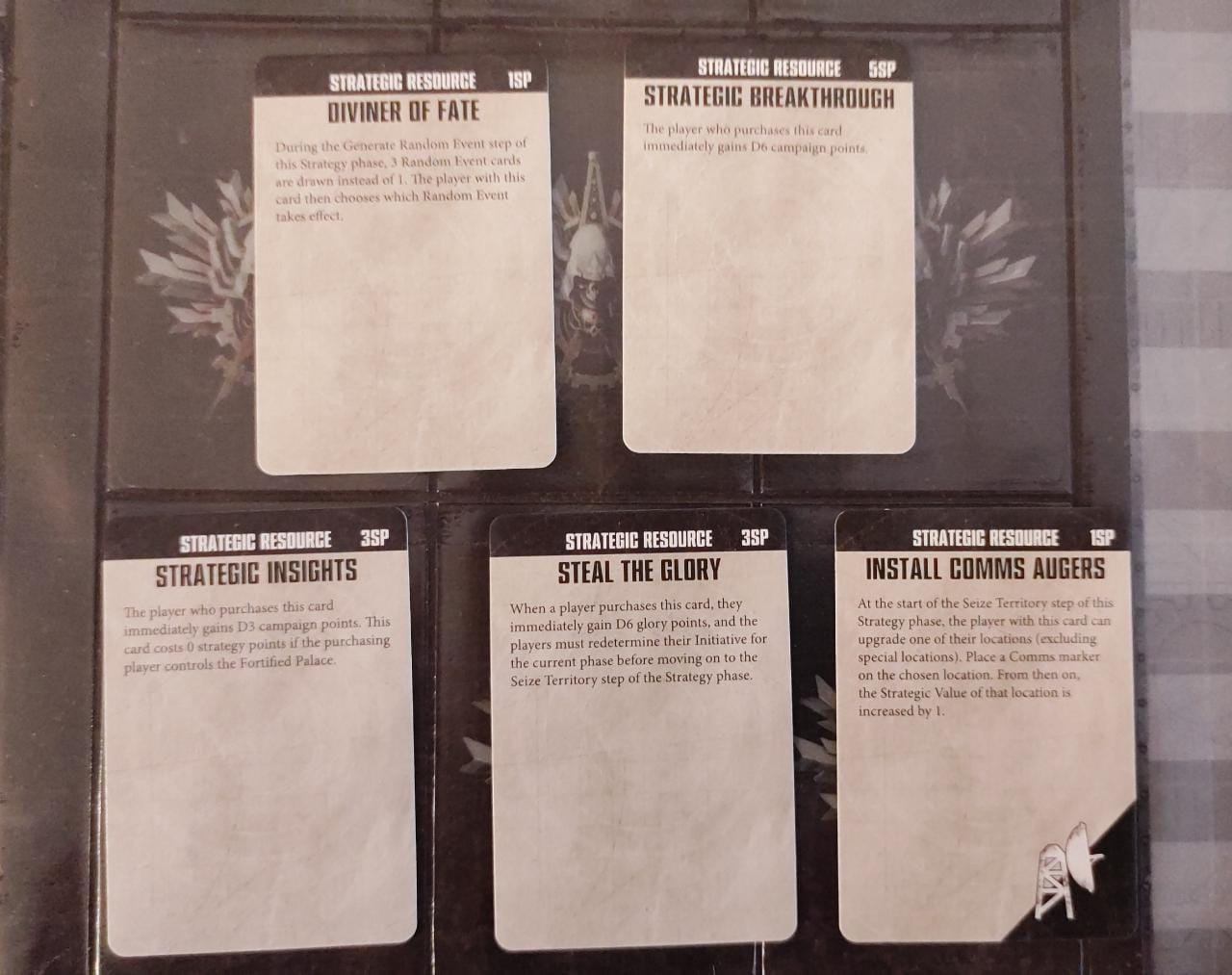 The White Scars rolled for the extra D6 campaign points, and got a 6. Placing them at 30, and 2 points over the necrons.

Then, the necrons rolled for their D3 campaign points, and got a 3, taking back the lead with a final score of 31. The first place and highest ranking value of campaign points in the whole Crusade. 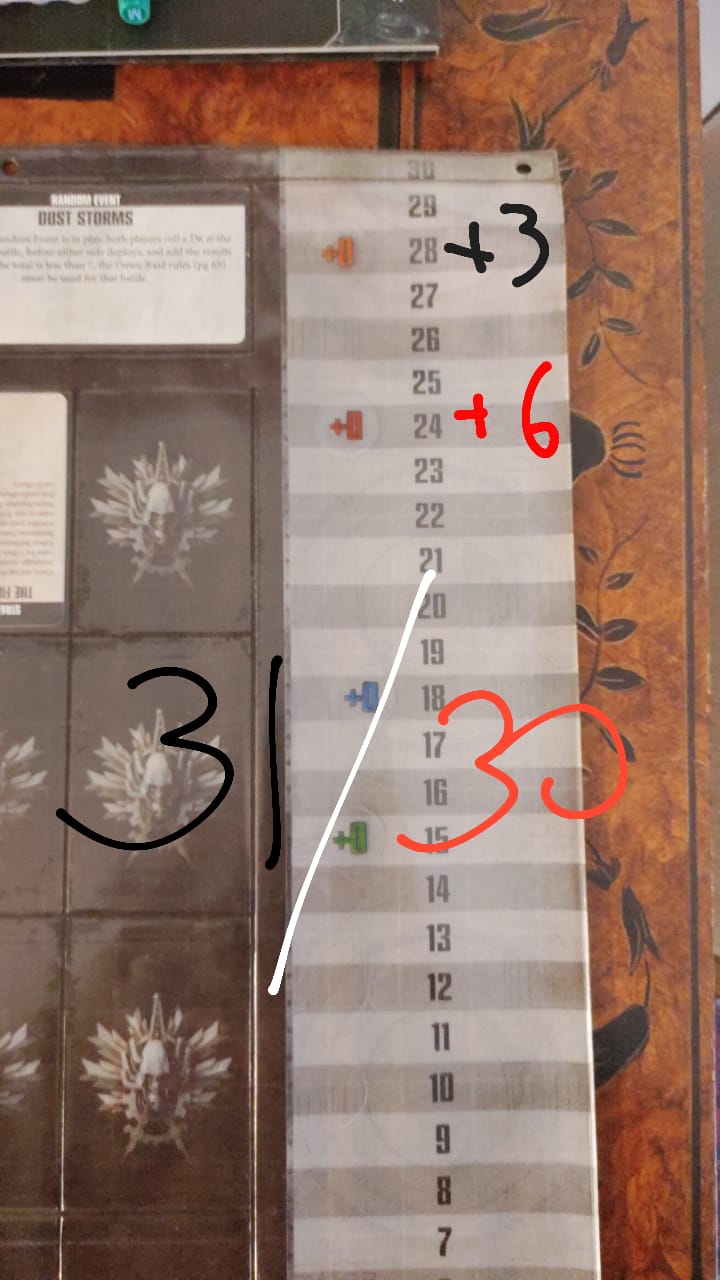 Now we move into the final round of fights. We are closing the narrative with 2 battles. The format of which is still being decided.

Per the narrative, all we know so far is that:

1) The Khan seeks to kill the necron Vizir, as he is the final enemy his hunt needs to be completed.

2) The Vizir seeks to clean the city of the presence of the White Scars, but remains confident in the fact that the Astartes have their days numbered. The city belongs to the Necrons. The necropolis that lies beneath is secure. Destroyers will clear the palce of stragglers, while the master of the host moves to the following city to awaken more warriors.

4) But, the demons are close behind them. They will not allow Casimir to leave this city, and so, they prepare their largest force to strike at the Astartes at their last bastion of defense. To take down the Psyker, before he can be extracted.

What we will do with this narratives is that the White Scars and the Necrons will have one final battle for supremacy. The scenario and rules to be decided between both players.

Meanwhile, the Wings of Dawn and the Sons of Rust will have one battle, using the "Eldritch Encounter" Scenario of the Pariah Nexus book. The narrative will have Casimir and his forces stand their ground at the Relay Station on Hab-Block 144, having called for an extraction. The Sons of Rust will send their demon engines in two waves. As this happenes, Osric and his own force will arrive from the northern districts, to provide support to the Epistolary, and allow for him to leave the planet safely to deliver his discoveries to the Chief Librarian and the higher authorities of the chapter's command.

We do not have a date for these battles yet, but things should happen relatively soon.

I am enjoying these campaign reports very much. Thank you for sharing them!

I am looking forward to see how the narrative will evolve in these final battle :-)

Great stuff! Looking forward to the final round.

After that, we will begin working on the system for our follow up campaign. We will be using the same setting, but try and improve on the format of the campaign as a whole.