106 replies to this topic

In any case, the army needs to be viable regardless of what "cult" a detachment is.

Death Guard can function just fine if a player was to say "yeah im just gonna play without my Plague Company stuff" and that is the kind of game design this codex needs to have throughout.

Picking a particular cult to be able to survive against local players in a casual game because it is the only good choice is bad.

What I think the Thousand Sons need is more magic.
We have rubrics and goats.

Seeing all these weapon improvements for the various 9th edition books... just hopin' and looking forward to a better missile launcher, soulreaper cannon, and warpflamer.  Dang....thats about it for weapons unique to us isn't it? Unless you count sorcerer staves and tzaangor weapons.

Please improve the scarab kopesh blade to something, anything.

I think we're guaranteed to at least get 12" on the warpflamers, with any luck the soulreaper will get the assault cannon treatment and get a shot per barrel, otherwise I'd like a more thorough overhaul.

Hellbrutes are still going to be good, I'd like to see more warpy options for them, like Inferno bolt heavy bolters without needing a strat, same with warpheavy flamers.

Yeah, something I wish GW did the first time, as an army-wide rule, all bolt type weapons should be using inferno bolt ammo.

I have zero fears about the book but I do sort of worry that many of the rules we want will be consigned to Crusade.

On the other hand, they could do us a Help and finally keep all that "Tzeentch is Fickle" dribble confined to Crusade (like the Spawn sorcerer strat, which is just a waste of paper which could be used for solid strats)

I'm less concerned with weaponry overhauls than I am with making our psykers absolutely stupid good. There is no reason to fail a power like Firestorm. The risk is there, the reward is small. Weaponry just fills in the gaps, or should. imo.

To be absulutly fair-that strat would not even be that bad if we had a slew of infantry chars like the DG has.

Because the once-in-a-blue-moon opportunity to blow up a minor char to place an instant spawn inside an opponent's shooty unit to block it will actually be a useful tool to have, but the very few chars we do bring are either not infantry, or too valuable. often both.

The flesh change strat is a fun little gimmick, still akward when using on models that are on the verge of death because more often enough, even on one wound I would still rather have the sorcerer be alive to dish out mortal wounds or whatever else. Honestly I would find it more useful and thematic if the flesh change triggered when a sorcerer died from perils. Placing a model at the end end of the phase like the necron resurrection protocols. A nice little "ah-hah" when this unfortunate circumstance does happen.

The Flesh Change strat is significantly worse now that they faq'd it so that a spawn cannot be placed within Engagement Range.

I would like to see a few things for Thousand Sons: new daemon engines like what Death Guard got, improved spells, dedicated anti tank units, and maybe something cool like a Silver Tower as a Lord of War but at this point in the lore they're probably too large to place on a table.

I think they're on the money with having it represented as distant artillery/influence.. just not with a 3CP strat

WIth the 9th FOC changes harming our ability to take characters, It would be nice to see aspiring sorcerers in rubric squads get real smite or options.

If they push the story and give a way for thousand sons to be remade, would that become something else in game? No longer automata (but not psychic) could they be worked into a Havoc-like role? Perhaps be given weapons that disrupt enemy psykers, or fast moving with an aura that can deny Deny the witch (custom JP eye-of-the-crow vibe)

Or they writhe and mutate into chaotic forms as they were doing pre-rubric, but with magnus guiding the transformation they become something more, like decent mutilators?

Here's what I'm expecting in the next codex...

Warpflamers will push to 12" (obv)

Soulreaper cannon will get go to dmg 2

Sorcerers will likely become our Lieutenants or they will give us a new HQ to fill that role. Someone else suggested they will split the sorcerers in the rube and scarab units like the mistress and repentia which is a possibility. It would also help with Abhor the Witch since rubes and scarabs will no longer count as psycher units.

I suspect we will no longer be able to get any better than a 4+ invuln except maybe on HQs. You'll notice they really clamped down hard on that in other codexes.

We MIGHT get a transhuman. Every codex in 9th so far has given out transhuman abilities like they were hotdogs. Maybe this will replace our 3+ and 2+ invulns.

Magnus will get 3 warlord traits and interact with the cults in some way. Perhaps he can know powers in cults and counts as being from all cults etc.

Warptime will be nerfed to Temporal Corridor (SM codex) meaning you can't shoot or charge afterward. I would keep an eye on the Orc codex when it drops because if they get this treatment then the writing is definitely on the wall. I'm hoping we get something like a +2 to charge rolls power to compensate.

I expect a mass overhaul of the psychic trees. We will probably get a lot of identical powers found in other codexes so far and they will take out a lot of gimmicky powers. I like the trees in the other books so far so this is probably one of the things I'm looking forward to the most.

Inferno weapons may get their own special rules other than more AP.

Some sort of doctrine system. Every other army that has come out so far has gotten one. Maybe we could get a psychic power themed doctrine where specific trees receive a bonus depending on the "doctrine" active.

Some sort of army wide bonus. Will probably be like the above^ or smite warp charges staying at 5. Who knows...

Now if we got all of that more or less I would be mostly content I guess. My biggest problem with chaos factions is how badly written their rules are. I'm a new player and almost quit the game when I saw what a mess piecing together their rules from multiple books was. 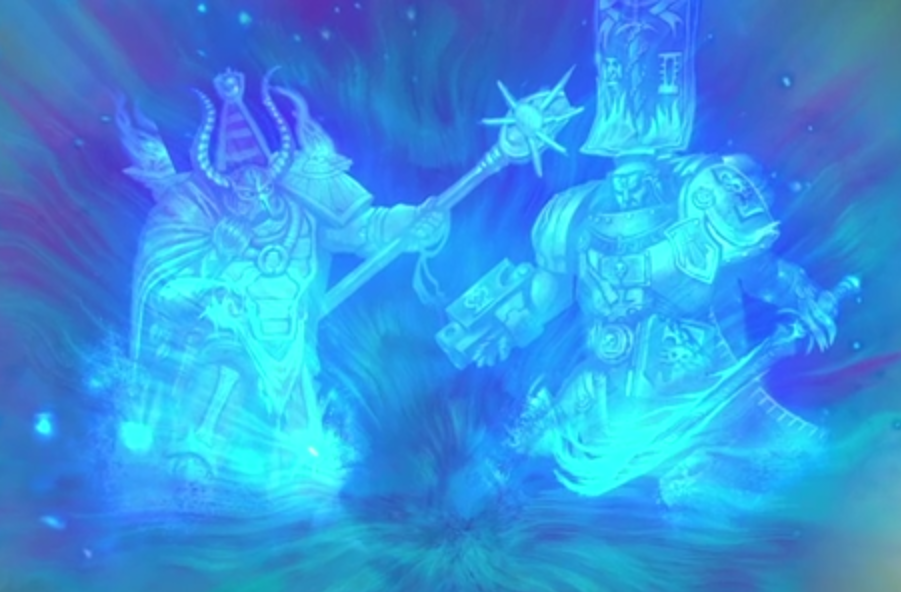 New character from an upcoming battlebox

I think the best part of the teaser means 1k sons codex has entered the line up (after admech, sisters, orks and around Grey knights). Hopefully at least comes with a character. They do need some more unique units like DG got. Everytime I see a blood angels librarian dread I think it's silly they can have it but 1k sons can't.

Looks like Madox tbh. I only say that because he has those older chaos horns but with TS aesthetic.

I expect it'll be a generic character. Hoping that it's not another Lord of Virulence situation, e.g. one where the rules don't clearly delineate between different kinds of characters (in this case, sorcerers)

At least he is a human, not a gor.

I am absolutely shocked that each TSons datasheet doesnt have their own unique spell like in AoS. That would add granularity, utility, fill in gaps for the faction, AND give you the choice of faction disciplines separately like normal. Ok I'm not shocked. I'm just shocked I had a dream about it and woke up mad.

Maybe this guy will be some sort of "_________ of Rituals" and be able to summon the Storm of Change spell.

This bodes well. The new character approach for box sets is decent enough, and for once I could do with more units so this is probably something for me (assuming it doesn't sell out before I can get it

). I'd also like a more generic character, especially if it could come with a new unit choice as mentioned. CSM get specialised roles, for Sorcerers too, and it makes sense for Thousand Sons to go off/in the deep end in particulars.

Even if it's something like a Sorcerer "dedicated" to a particular cult's powers, it'd add a lot

Hoping we can find out more soon.

I expect it'll be a generic character. Hoping that it's not another Lord of Virulence situation, e.g. one where the rules don't clearly delineate between different kinds of characters (in this case, sorcerers)


Or hopefully they don't lie about the character. Remember when they said the Lord of Virulence would support Daemon engines and then didn't even give him a single rule that helps them?

I don't know I Thousand Sons are obsessed with knowledge in general not just sorcery so I think they have more design space than just adding in more powers. You could have characters that provide buffs for rubrics against certain targets like vehicles and monsters for example.

Back to x THOUSAND SONS x