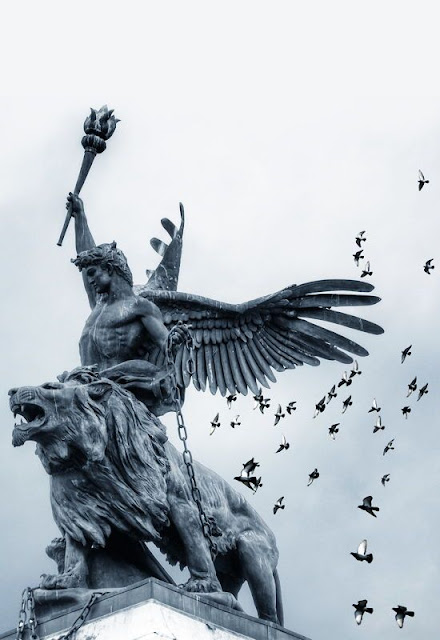 For some time now, I've been running a series of project-logs over in the WIP forums detailing various forces and occurrences in a particular region of ostensibly Imperial space. These span the gamut from Heresy-era campaigns through to M38 Crusades and M42 local conflicts fought between quasi-feudal forces.

A lot of what I've produced for many of these has been a combination of world-building, in-universe reports upon matters of culture (and religion) or history, and the occasional narrative piece. It's arguably wound up outweighing the miniatures in some scopes.

I'm intending to get this all more 'organized' - not simply via centralization of various of those non-miniature elements here, but also by going through and compiling points of use so that I can deploy them in a more consistent manner later on.

So things like words, names, characters, toponyms, historical details and rough timelines of events ... the stuff that really turns it all from a scattering of lines upon the page into something seriously internally interconnected that might be more 'lived in'.

I keep much of this in my head, of course, and it's already been happening in there already for ... some years now , especially in dialogue with my long-standing collaborator, Umbral; but as I've found myself doing things like googling my own posts on here to see which log I used a concept in so that i can find out just what it is that I actually called it ... well, it's not hard to see how the notion of putting it all in one place and *systematizing* the elements contained therein in a lexicon, or a dramatis personae, or even arcening towards stellar cartography ... was a logical step.

I also figured that it might be a good idea to place the narrative development / worldbuilding side of things, in a part of the forum where people may have a greater interest in these. As the WIP forum is, understandably, mostly frequented by people who prefer a more miniature-dominant approach.

Two of the major threads in question:

First up - Hara Barazaiti , which looks at Adamantia circa M42, with frequent incursions from the past ;

And second - The Haunting Harii of Hvergelmir , which has a broader (but eventually contemporaneous) period

Well..... call me tantalized and intrigued

You've really got something very interesting going on here. I've read through your first post here with great fascination and I've skimmed through the two threads linked from your second post. I've a flurry of questions but I'm going to hold off on barraging you with them until I've given these last two threads the study they deserve.

In brief, I like what you've got here so far, and I'm looking forward to more

We don't get near enough activity in the LIBER IMPERIALIS, so this is a most welcome thread.

General/Other:
> The Pinnacles [LokaPura ; AstraPura ; Caelestial Occuli; Jewels of Heaven]
> The Stars of the Dead [Star-Eye-Barrows ;
> The Region of Ghosts
> The Varuna [lost ship, pride of the Adamantine navy - also has the necessary activation elements for the Stars of the Dead, Operation Apam Napat]
> [forgotten the name of Thorian station]
> JyothaSteppe

> Dead Stars
> The Vratya
> The Manyu

Dhanvan locations of interest
> Huskaala sector [combination , works out at 'Rajasthan' via 'Huskarl' but also 'Kaal']
> Ondlangr  [literally translated, 'Long(Expanse) of Wind'; although carrying other means, also - with the meaning-field for 'langr' including 'ancient' (as in 'long ago'), and 'Ond' also having a meaning of 'Spirit']
> Hreumigarh  ['Dusty/Roaring/Famed' depending upon inflection, plus 'Enclosure/Fort/Settlement'].
> E'Rumkhoth [somewhat figuratively translated: 'Fort in the middle of nowhere']

M38
> The Fall of Adamantia

Adamantine Way -
"And in this way, while the feeling, the knowledge, the *belief*, of being Adamantine, was constantly out there waiting to be re-fleshed .... Adamantia could never truly be conquered. Adamantia could never truly die. The Adamantine Way stretched out as an endless road, a path, and a Pati, running all the way from Terra to the present. A shining ascendency through Holy Light, which cast a direct line across the otherwise trackless Steppe of Stars. And which also therefore situated Tapas - Heat, Light, Struggle, Worthy Effort - and Vax ('Speech'), as dual emanations from the Adamantine Goddess at the Heart of All."

Vajra - "Adamantine, Hard, Implacable, Indefatigable, Enduring."
viz. Ash-Clad - Upon the battlefield, the Ash-Clad put to use skills often honed in previous lives of military duty, yet also marry this with the mystical facility afforded to them by their unquenchable faith in the power of their homeland. They are, after all, swathed and protected in Her Native Earth - the stuff, carbonized, of which the hardest Diamonds (Vajra - a term that can mean both Adamantium, and Diamond, and Thunderbolt, Weapon of the Gods ... for such the most gifted amongst them also see themselves as) is made.

Pralaya - " 'Pralaya' meant an 'unraveling', and in this context referred to the tapestry of Adamantia coming apart due to some apocalyptic-scale onslaught."

Blade-As-Mind - "wherein the goal and object was to take the singular shearing purpose of a weapon, and think out, reason out, feel out the potential paths of its application, and thusly deliver not only immediate victory but the far-reaching triumph which could only come from understanding the nature of its employment and the broader context of the campaign. "

Mind-As-Blade - "designed to move past the nebulous clouds of doubt, and instead concentrate and focus the mental faculties simply and singly upon the bearer's nature as a weapon - and thence, excel at one's appointed role, regardless of such hesitation-inducing consternations. "

KalAdharastines (occasionally Gothicized as 'Kal-Adrastines') -
'The Blade / Leading Edge / Hand of Kaal' - Kaal being an Old Adamantine theonym for a deity of both Time and Death and bearing the Black colouration of the Dark Night. With slight alteration of inflection, it could also be interpreted to mean 'The Skillful in the Craft', implicitly of Death; and when calqued into the Yavanite languages to Adamantia's West it became 'Kal-Adrastines': understood there as "The Inescapable Kal".
['Kaal' also as 'Beauty']
- Bhairava specialization .. terror, headtaking
- Kapalika - 'Headman'

the Cog-Wheel device represents a not uncommon escutcheon for the KalAdharastas - as it is thought to symbolize the inexorable, regular expression of the Law : the central wheel about which all else turns in motion as a result. And hence, once again, the inevitable cycle via which Night follows Day - and the KalAdharasta pursues his quarry til its dissolution. Declaring to would-be usurpers that they shall be ground down between the indefatigable gear-teeth of Order in recompense for their having sought to defy and oppose Reality Itself.


The Manyu - " a 'spirit' or a 'mind' (with which it is etymologically linked), as well as the 'active expressions' thereof. In the latter case, most usually in aggressive, negative form. It is 'wrath' and it is 'sorrow' - yet it is also 'piety' and 'zeal'. Such are the intricacies of the Adamantine Old Tongue. "
- "veer-y specific form of destroyer-spirit in the Adamantine Old Faith. A Facing of the Spear-Lord Who takes the field when situations are at their direst, inspiring and imparting His power to the Adamantine war-host; and overtly terrifying any who might seek to stand against Him. "
- "referring also to the 'War-Mask' and its accompanying psycho-metaphysical state of investment wherein the Devotee becomes almost akin to those baelful spirits from Adamantine legends whose faces and facets they have drawn in. "

Ash-Clad - "an order of renunciate warrior-mystics, so named for their practice of going into combat their skins slathered with the white ash of dead burned worlds and shattered memories.

During the course of the Scouring of Adamantia, countless thousands of settlements, shrines, and clans were consigned to the charring expurgation of the Ekpyrosis Edict. The intent of those who sought to inflict such all-enveloping iconoclastic incineration upon Adamantia was that it should be burned down in spirit as well as in physical form. The heritage, culture, and mindset that had previously flourished there - and enabled Adamantia's flourishing in return - be reduced to ash upon the wind, never to rise again.
"

Trita - THE THRICE-BLESSED SAGE-SEER OF THE PIERCING FLAME

"Amongst the Harii, it is said
That Fire, Lightning, Sun,
Are all of common thread"

'Testimony of the Wind Lord as to Ancient Days', a mytho-historical text of the Adamantine Folk Religion.

Also tagged with one or more of these keywords: Adamantia, Adamanticores, Vox Stellarum, Hara Barazaiti