Twilight Wardens assemble! A thread to motivate myself

I got back into 40k a few years ago and had the idea to start my own Space Marine chapter.

The liber article can be found here: http://www.bolterand...ilight-wardens/.

(Long story short, they bear the geneseed of Rogal Dorn (specifics not totally clear atm), their arch-enemies are green-skins and they are based on african cultures, particulary herdsmen like Zulu or Massai.)

Some may wonder: "Didn´t you start that thing 4 years ago?!"

Well, yes. I might be a horrible hobbyist. Or not. I don´t know.

Anyways some things kept me from wholeheartedly continuing the project. It´s not that I didn´t do anything. I passionatly assembled minis for a time. Painting is another matter entirely for me. Though I am a creative person and quite decent at drawing I somehow fear putting a brush in my hand and paint a mini.

So only a few got started and eventually even finished. Being your own worst critic doesn´t make things easier, right?

As the title says I wanted to finally start this plog to motivate my self to be a less-horrible hobbyist. Of the Twilight Wardens fluff, I am actually quite proud. It isn´t totally set in stone, but that too can be worked on of course.

So I make a start in presenting you my build (and some painted minis).

Enjoy and I´ll be grateful for any feedback!

My first painted marine! The paint scheme is not really what I want anymore, so he will eventually be repainted
https://imgur.com/fUmee1Q

I just had fun putting this one together. A little over the top, I guess. Don´t know what he will eventually be used as yet.
https://imgur.com/1OJMRf6

Cataphracti Captain. Had to buy because he looked so damn cool! Don´t know if even playable in 40k atm

A painted Intercessor, hooray! Not really satisfied with this one, but hey he can always be repainted.
https://imgur.com/lCDy6ym

The "flagship" of my army. I got him for christmas and my brother was so kind to paint him for me. A reminder of what the army could be one day...
https://imgur.com/abKvNBI

Thanks for watching. I might replace the links with actual pics, but atm I still find it a bit tricky, tbh. 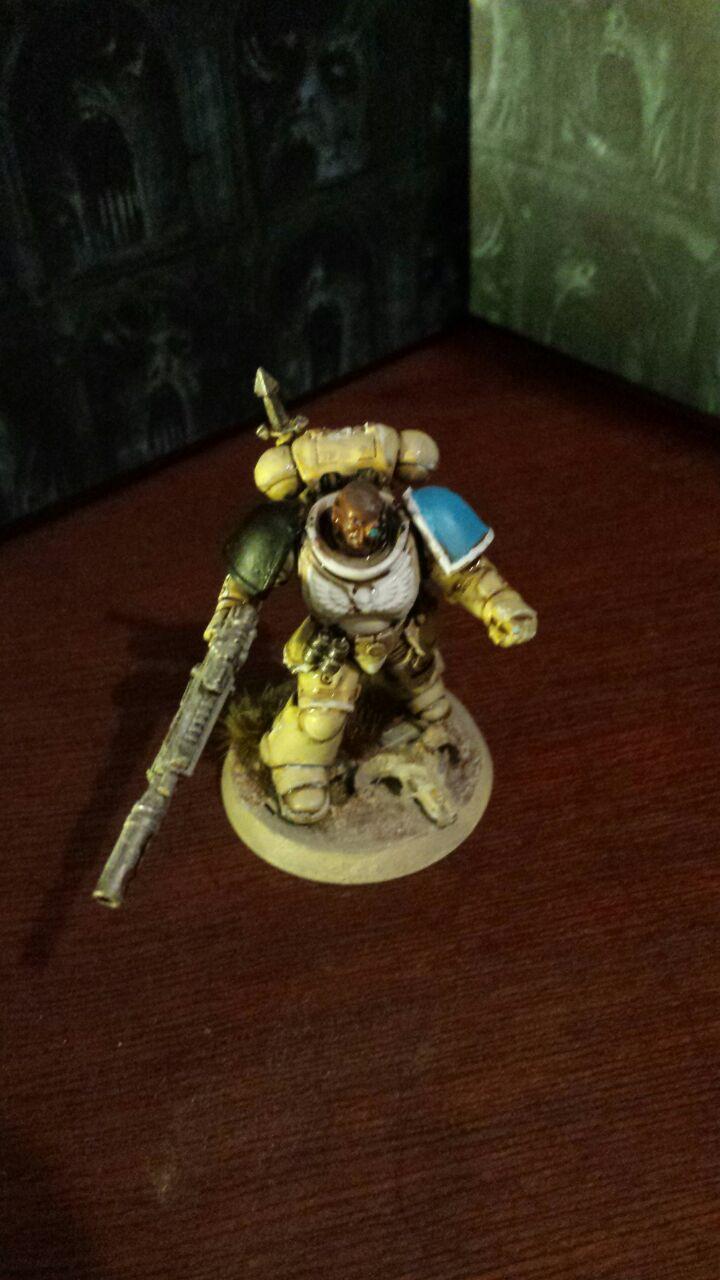 There are you are. It’s quite simple really - you just need those bits in the square brackets each side of your links.

You don´t use the brackets themselves, do you?

Thanks!
You don´t use the brackets themselves, do you?

You will get the hang of it


I´d say it symbolizes the desert (main body), night and day (shoulder pads).
(I actually just came up with it, but I think it fits. ^^)


No, that sounds good.

You might want to think about why their name is effectively “those who guard the twilight” - is that a time of greater danger in their home world? Or is it more metaphorical, they guard against the fading of the light...?

I quote from the Liber article:

"A "Twilight Warden" is the honorary term for able-bodied men, guarding the herds for the dangerous period of twilight at dusk and dawn, then the gods sleep and hyenas, lions and other dangerous predators stalk the Night, ready to slay and eat the animals of their precious herds."

"The people of Enoch are deeply spiritual and have many myths concerning the earth, animals and natural phenomena.

Their pantheon is vast with a myriad of spirits, animal gods and an extensive cult of mythic forfathers and ancestors.
Two vastly important gods which can be found with any tribes though, are the twin gods (who are also husband and wife) Nami and Iman.
Mani, known as the Great Father, or the Demanding brings hardships to make his children, the people of Enoch strong, while Iman the Great Mother, the Caring, gifts them out of love. When both are honored through good, just living and their respective rituals an ideal state is preserved if not, ill will befell the people in one way or another.
Mani shows himself through sunshine, storms and drought and is peronated by the sun, Iman through rain (or floods) and is personated by the moon, clouds and the birth of livestock, Manis time is the day, Inam´s the night. Dusk and dawn, when lions and other dagerous animals prowl to hunt cattle and kill men, is the time when both of them sleep and so men have to fight against nature in order to survive."

Granted, predators also come at night or daytimes. However they tend to think, that they are better protected during those times under Nami and Imans watch.

At least that is my idea. The name should suggest that they don´t guard the twilight, but in the twilight so to say.

I could add to it, that one or several ork invasions coincidentally came at times of twilight. What do you think?

I think the background/history/philosophy behind the name is really great - apologies, I hadn’t read your Liber article.

I also think it’s better not to try too hard in fitting the in-universe events to fit that philosophy. So no, I wouldn’t try to fit coincidental ork invasions with the background.

However, the choice is absolutely yours

Also tagged with one or more of these keywords: DIY, Space Marines, Liber Astartes, Twilight Wardens