One of the biggest draws to Tyranids for me is the sheer scope for converting and painting them; due to their nature as a constantly evolving numberless swarm of giga-predators, where even the smallest Hive Fleet has sufficient numbers to block out the stars, there's plenty of room to get creative with colour schemes, weapon conversions and even anatomy. Their fluff is (with the possible exception of daemons) the most "Your Dudes" friendly of just about any army regarding this; they don't have a Codex Astartes to follow, Mechanicus supply chains to worry about or Administratum to be hamstrung by, and the end result is there's basically nothing to stop you going full Rule of Cool with how you model your army.

So with that in mind, I thought a rather cool idea for a thread would be a place to amass ideas, inspiration and the like for all things Tyranid, be it old fluff, monsters from other media, or real life biodiversity for inspiring paint schemes and conversions. So without further waffling, let me start!

First off, colours. I've always found crabs and other crustaceans fascinating, and in some ways Tyranids have more in common with them than insects. Obviously the "coconut crab" technique has become very popular lately, and understandably so as it's relatively simple and looks stunning, but there's so many beautiful crustaceans out there whose colours could be applied to a Hive Fleet. For instance, I went on holiday to Tenerife shortly before Nurgle decided to pay us all a visit, and got these shots of a delightfully coloured crab. 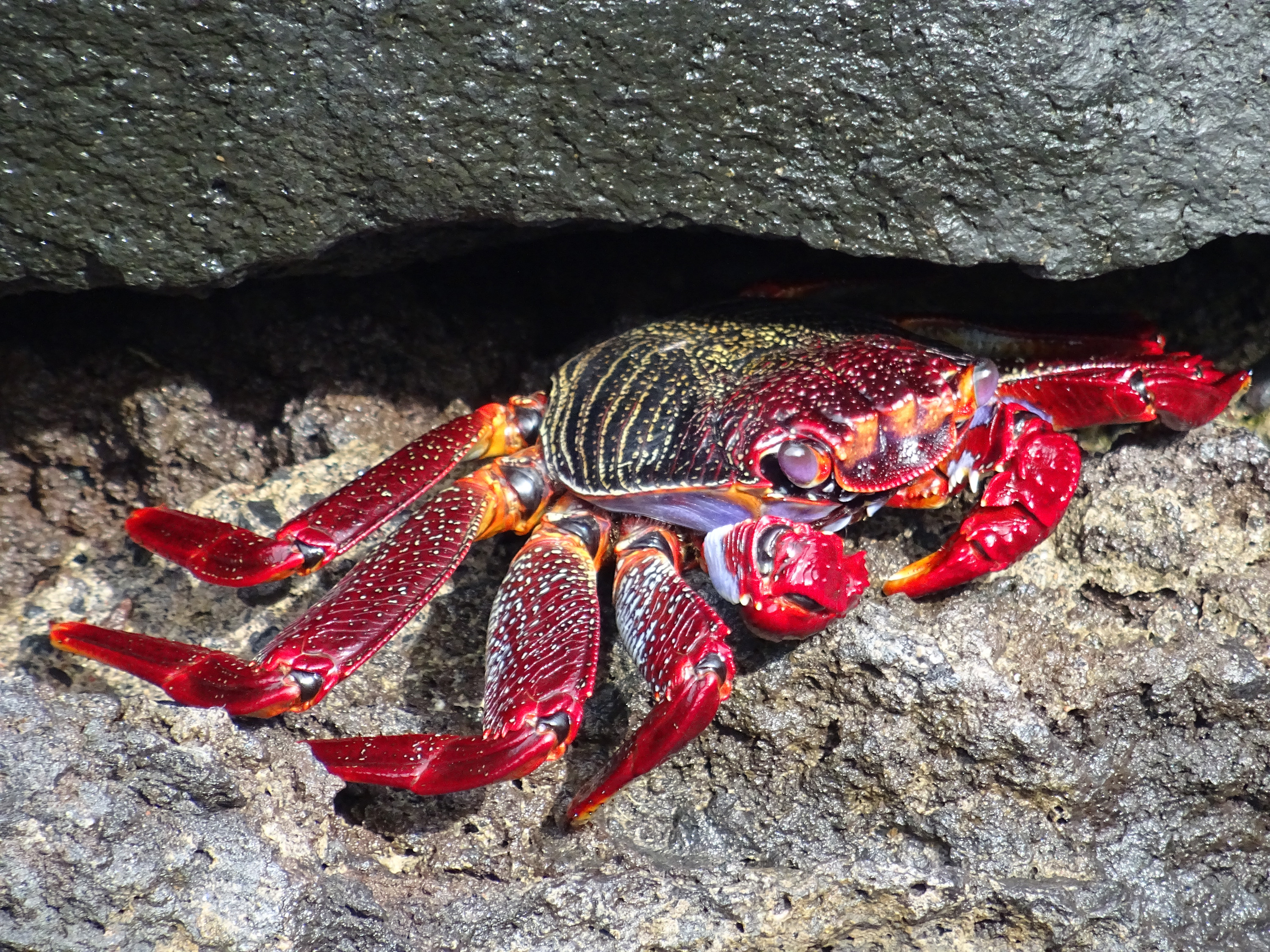 Another concept from nature I've always found fascinating are patterns intended to scare off predators or otherwise make the bearer look scary. The most obvious of these are eyespots on butterfly wings, which I think would look great on Tyranid carapaces, but another rather cool idea would be to draw from the utterly harmless and rather cute but menacingly coloured Death's Head Hawk Moth, with its abstract but instantly recognizable skull pattern: And in terms of insects, there's the Goliath Beetle- as my Fleet is named Goliath, if I were to try a new scheme I might base it on this. 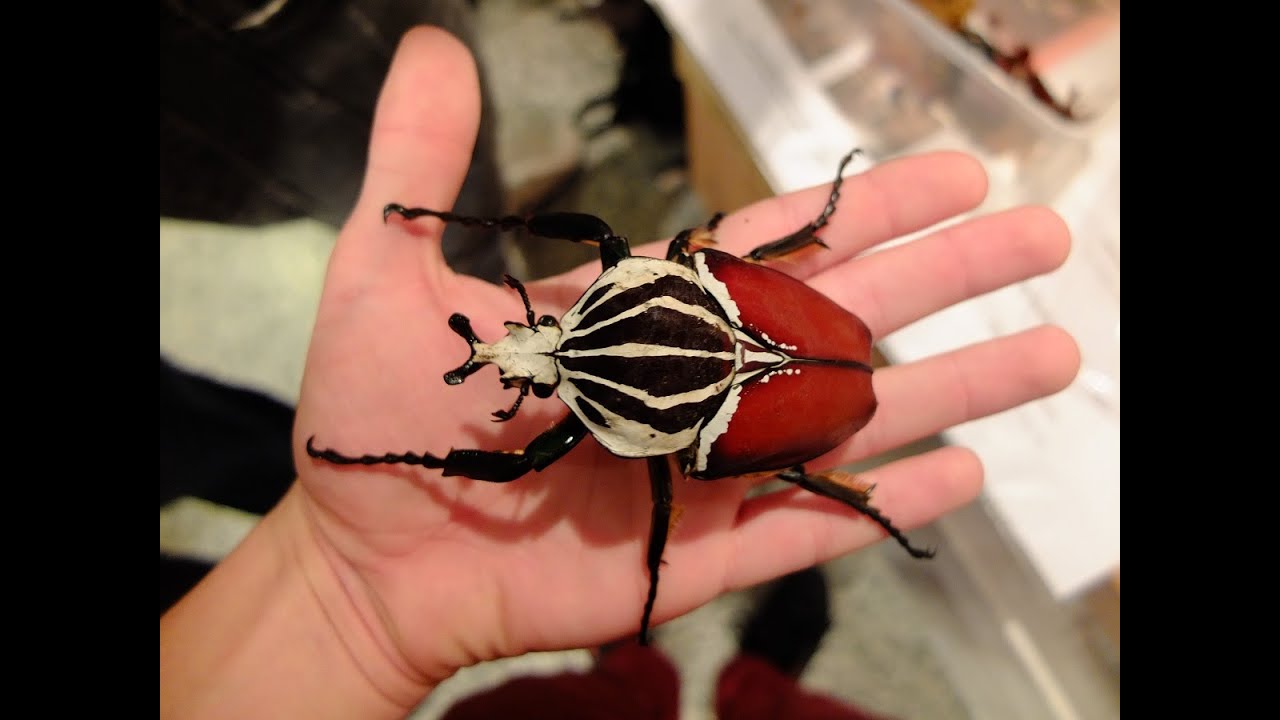 In terms of conversions, I've already made my preference for insect wings clear (TLDR: Leaves all the limbs free and looks cool) but once again dipping into the rock pool and looking at crabs, I had two ideas for conversions for Carnifexes.

The first (and most hilarious) is inspired by this little cutie, the Boxer Crab: 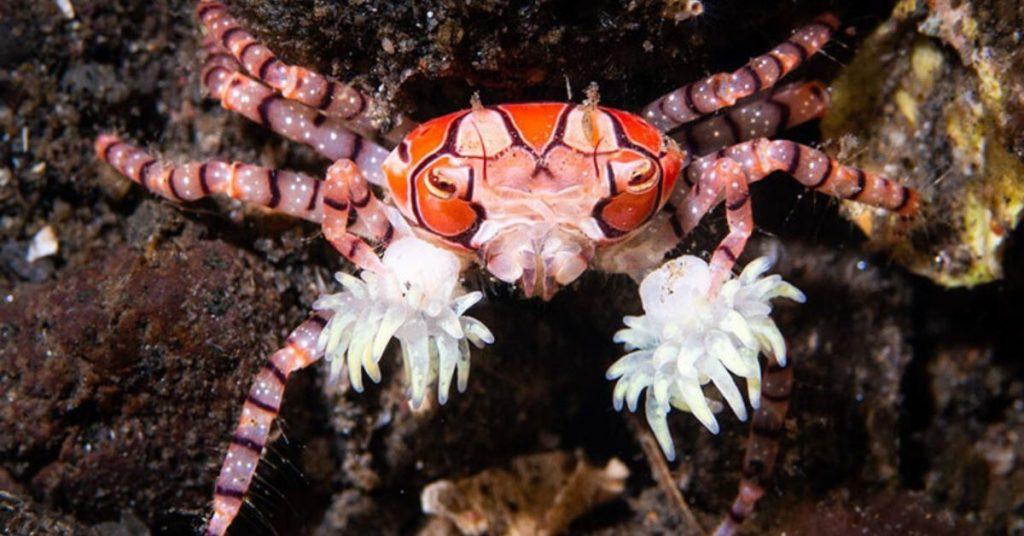 This adorable critter uses sea anemones as stingy boxing gloves, forming a symbiotic relationship with them. Now, obviously this creature is a bit too loveable to be a Tyranid, but the same basic principle doesn't have to be. Simply put, how about a Carnifex that eschews more regular claws in favour of symbiotic creatures that sting, bite or slash the foe grafted onto its forelimbs? You could even take inspiration from sea urchins and give it horrible balls of needles as its "boxing gloves".

The second is the humble hermit crab. I assume everyone knows what these look like so no pictures, but it did occur to me that a Carnifex using a burnt-out piece of tank wreckage as rudimentary armour in a similar manner could be rather neat? Obviously the Carnifex would still be fully armoured underneath (unlike the soft bodied crab) but more protection is always handy.

Anyway, over to you guys!

First off, colours. I've always found crabs and other crustaceans fascinating, and in some ways Tyranids have more in common with them than insects.

You are, in fact, very correct.  It's not the only interpretation, but I actually talked to Mark Bedford, the sculptor that established the current style of Tyranids and Orks around 3rd ed, I think?  1st and 2nd ed Tyranids and Orks looked quite different.  You might know Mark Bedford as the lead designer behind the Old World, in that recent video where he was talking about Kislev Bears (that is such classic Bedford, really).

Mark specifically cited crabs and crustaceans behind his designs for Tyranids, combined with some simian and ape qualities.  Previously, it was more just Xenomorph Aliens, so his addition really was that shellfish element, really took it up a notch imho.  Gorillas were a big thing for his Ork designs, too.  Good eye, Brother Evil Eye.

Great idea for a thread Evil Eye! Inspiration is very important to keep you motivated and engaged.

It’s funny that I too was drawn to Tyranids after crabbing on holiday with my son last year!

N1SB, nice insight into the evolution of the Tyranids!

Looks like I found a good source of conversion parts for bigger Tyranid monsters... Being a Louisiana native, I'm getting the gumbo pot and boilers.

Being a Louisiana native, I'm getting the gumbo pot and boilers.

Also I managed to snag the crayfish and the mantis that Fujimi makes from HLJ- the mantis wings look like they'll be really useful for monstrous creatures, and both kits look like veritable treasure troves for Tyranid critter conversions.

"clang" You get back in dat pot! "Skittering noises followed by a bolter shot and several curses in creole gothic"

So I don't normally go for 3P models (nothing against them, they just don't really do it for me most of the time). However, I have recently discovered a rather cool totally-not-Tyranid one-man operation- Hydracast!

Whilst not all of his stuff appeals to me, the stuff that does is really, really nice. Most notably the weapon arms he sells and these awesome Tyrant Guard with "lance" boneswords and whip-shields... 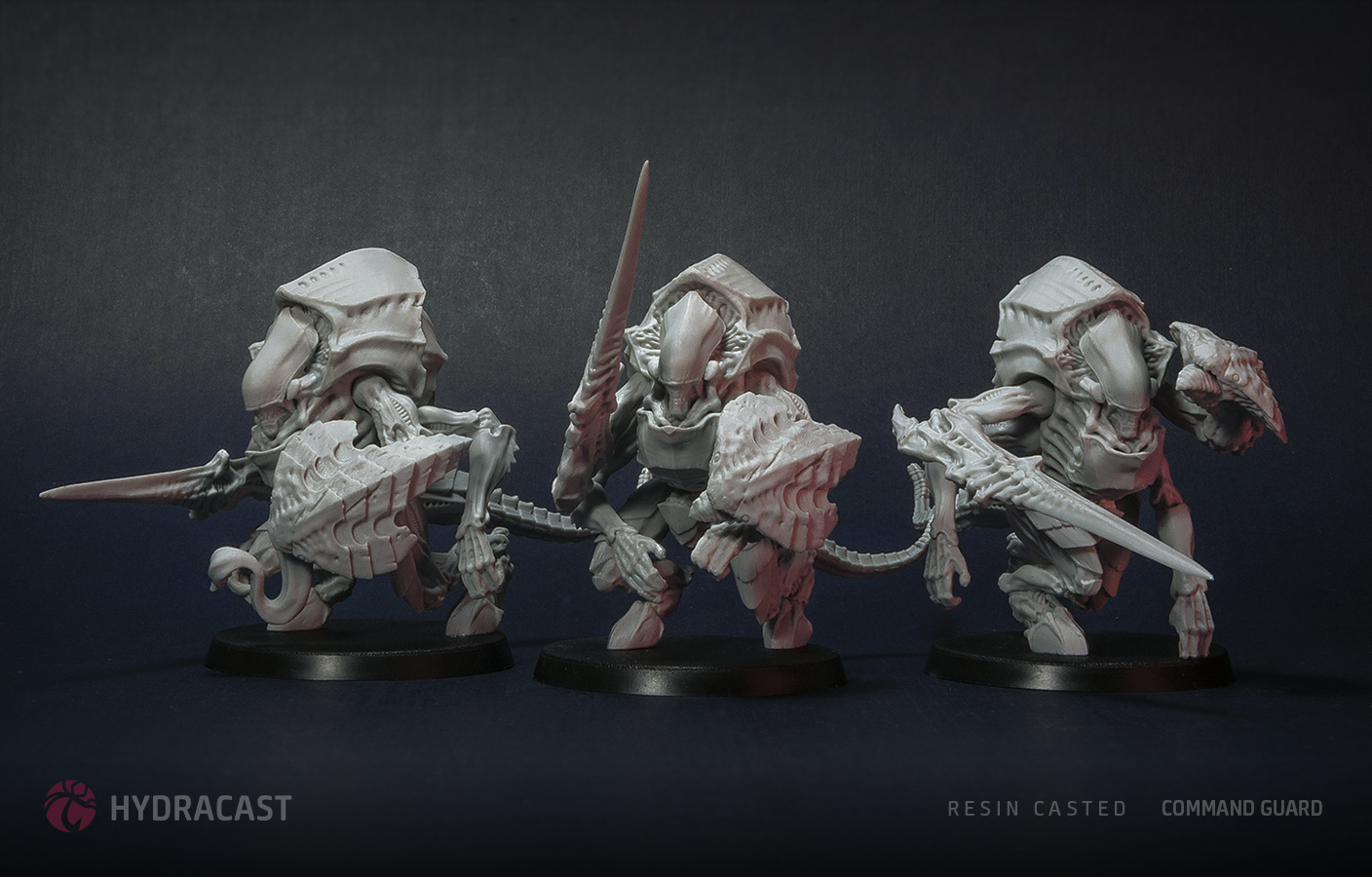 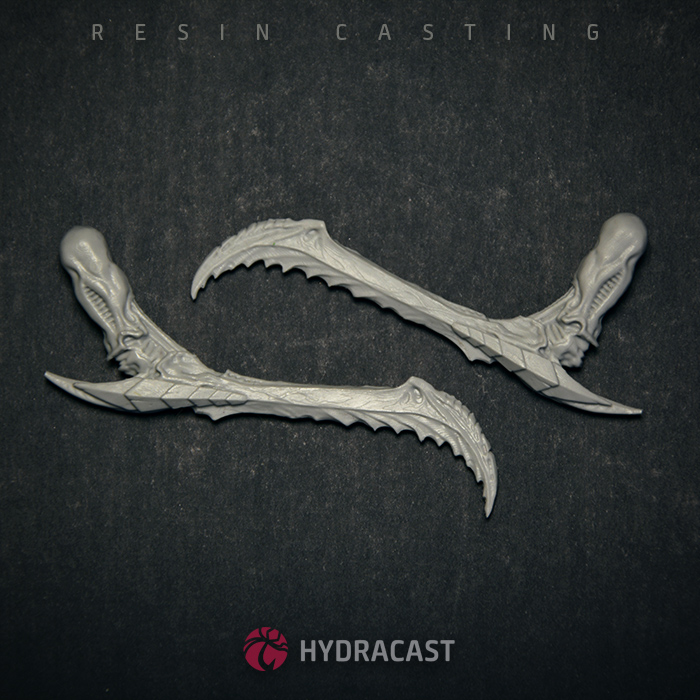 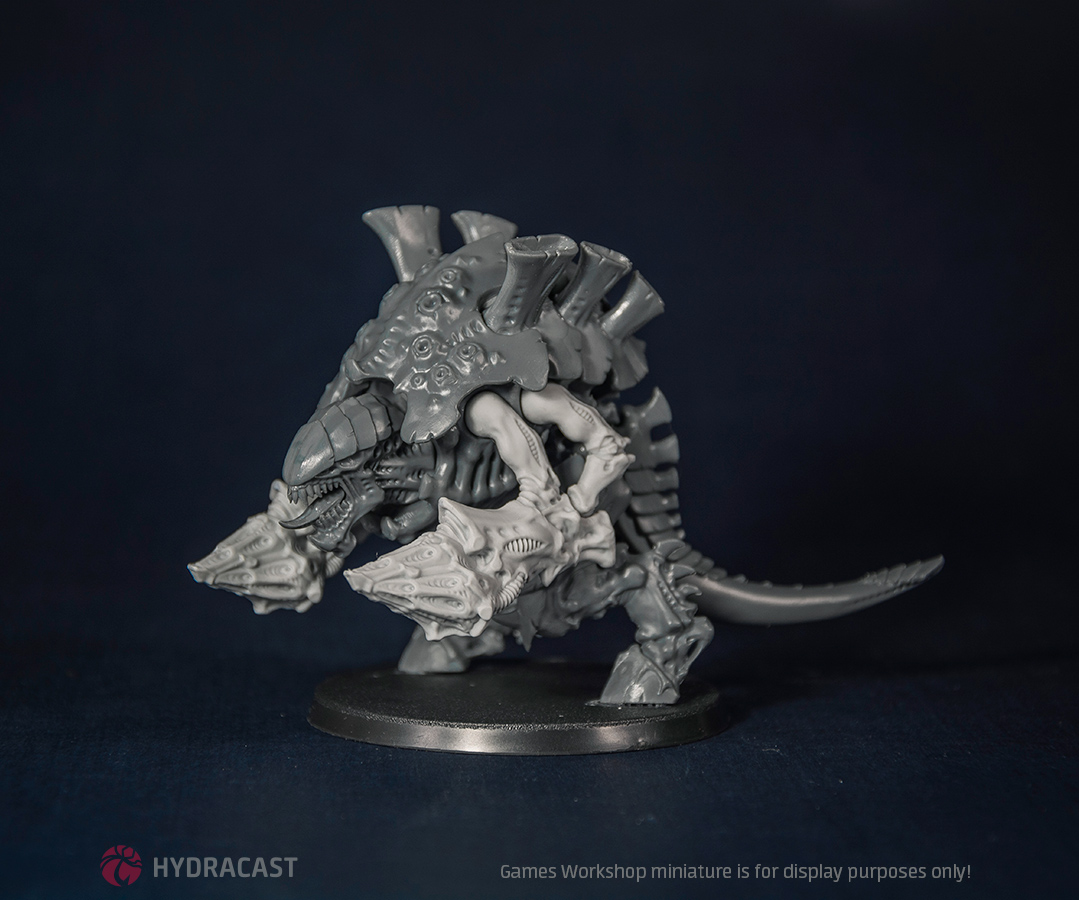 One project I'd like to undertake one day is to mix-n-match Nids with demons bits for a "Hivefleet Daemonium" look.
Until then I'll just show off some of what I've found.

Etsy is full of neat Tyranids conversion ideas and parts like these alternate zoanthropes: https://www.etsy.com..._grid_organic=1