The intention of this review is to inform any of the KS backers or individuals who may buy one of these second-hand, I’ve already seen a couple listed on eBay. I do not wish to make light of anything that has to do with the kickstarter itself, only look at the product in hand. I also hope this creates a network of people who can share builds, hacks and other advice regarding this terrain system.

This review is based on the “Medium” Backer Cathedral, I did NOT get the Daedelus expansion (which was included in the promotional material) or the fabric mat. As this backer reward was said to be the one used to create the images used in the KS campaign, I feel this offers the most level playing field in comparing what was shown to what was delivered. This system used a tension clip system to attach pre-printed die cut pieces to each other to make a gothic style cathedral inspired terrain for warhammer and other analogous game systems.

Cons: Assembly videos provided by RH are limited. Clip system was hard on the hands. Cardboard will most likely not respond well to repeated rebuilding.

One-shot: I got what I paid for and am happy with the final result, however the road to get there was a journey with quite a learning curve, and not by choice. 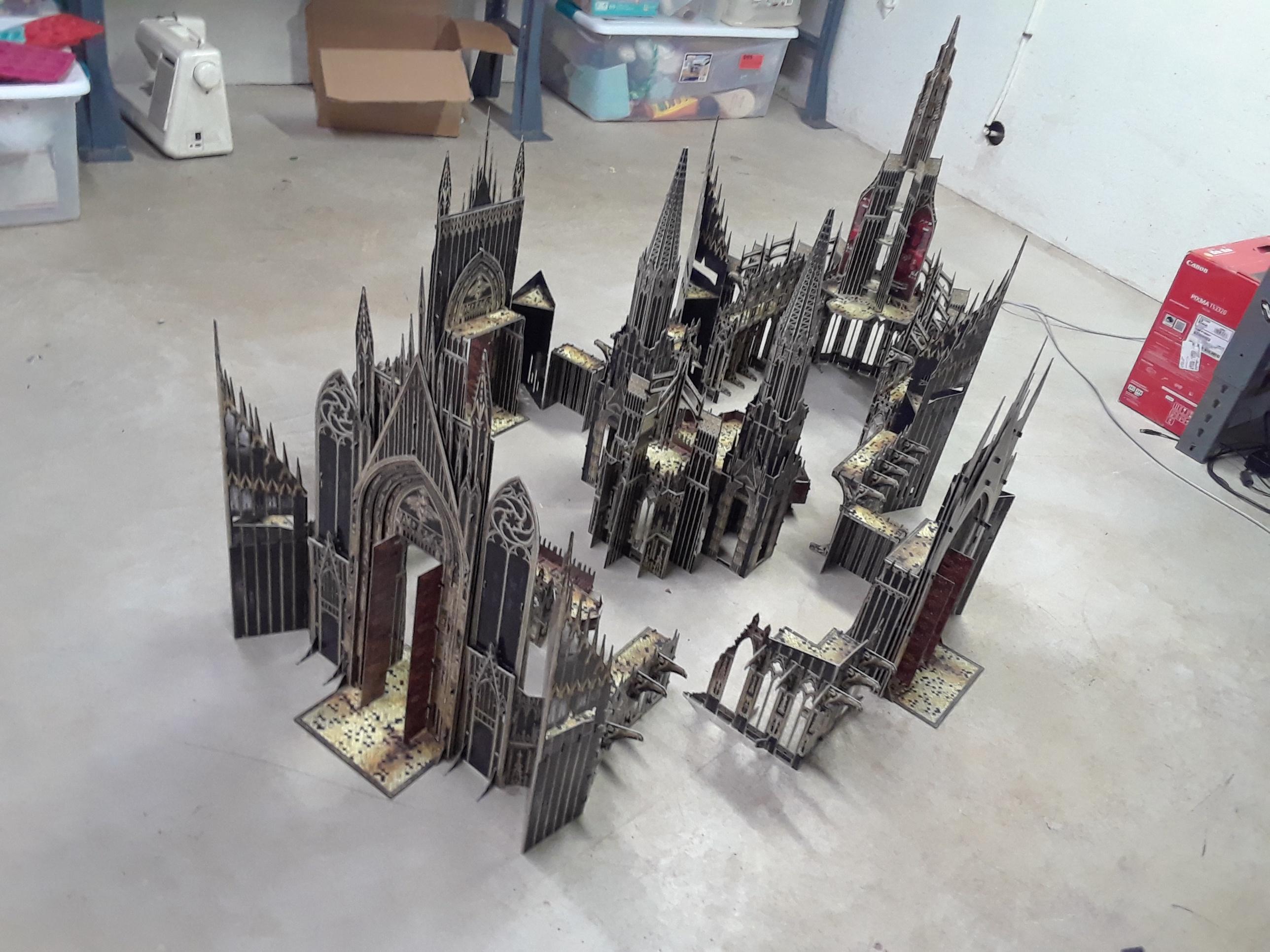 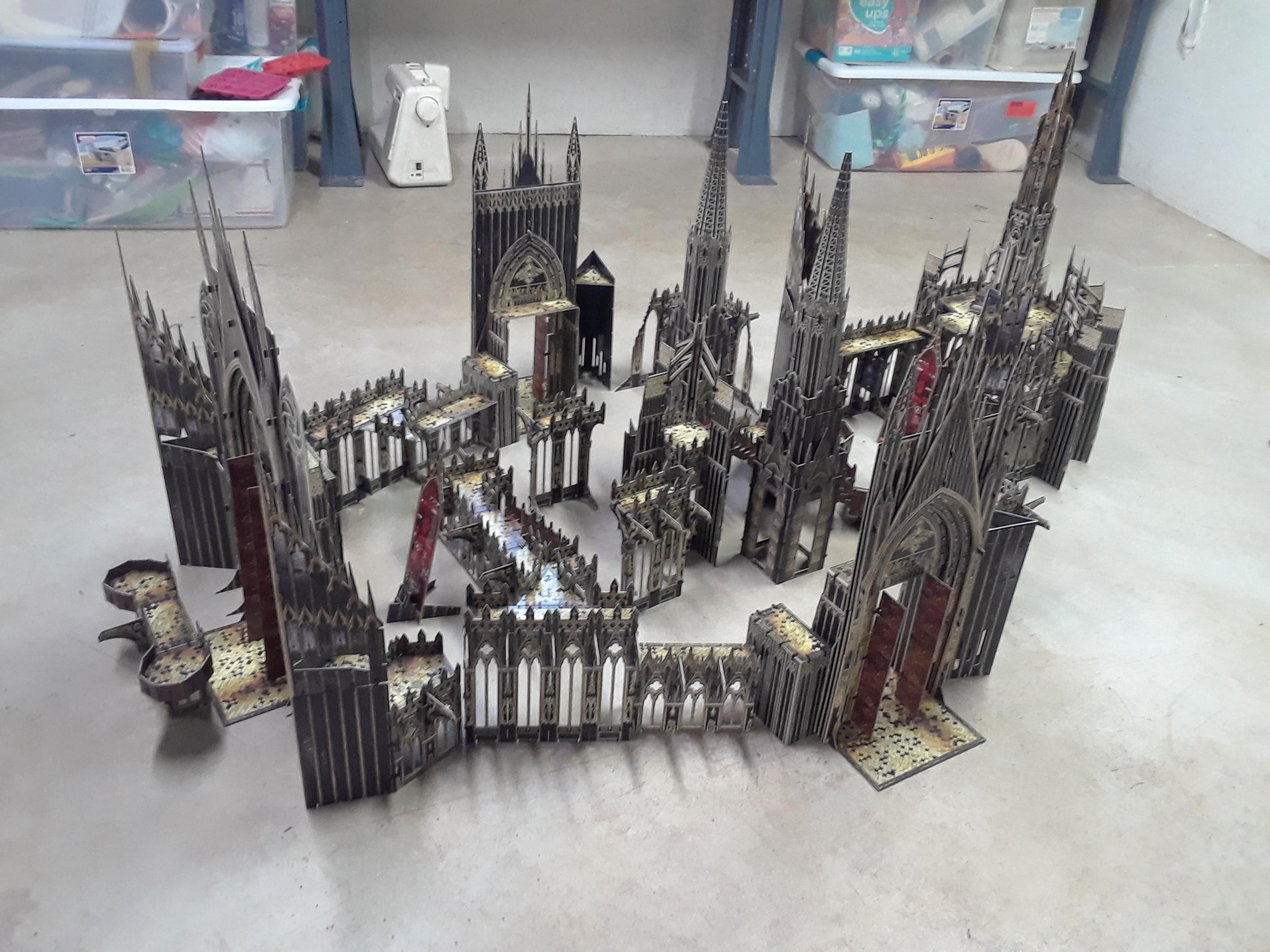 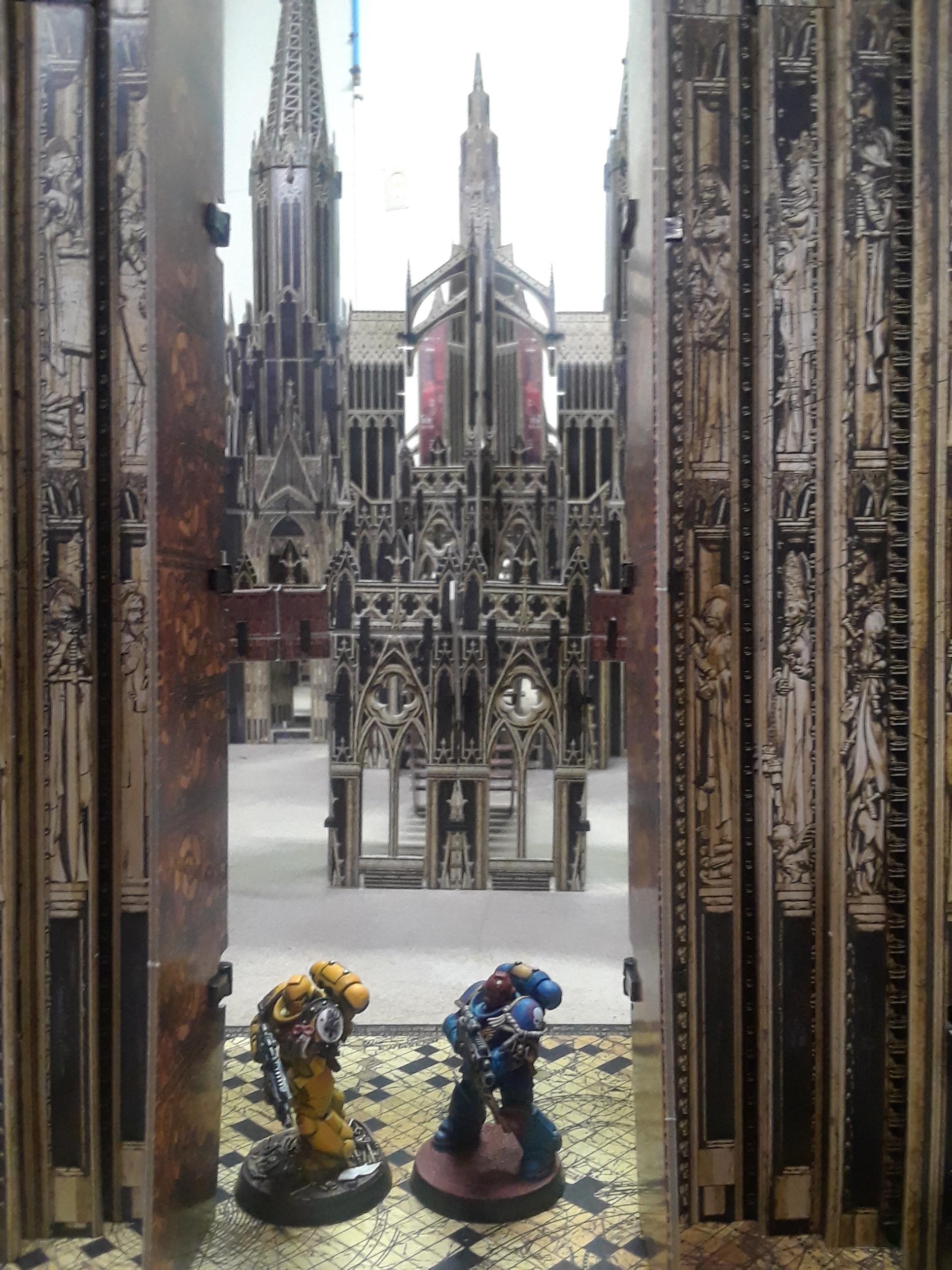 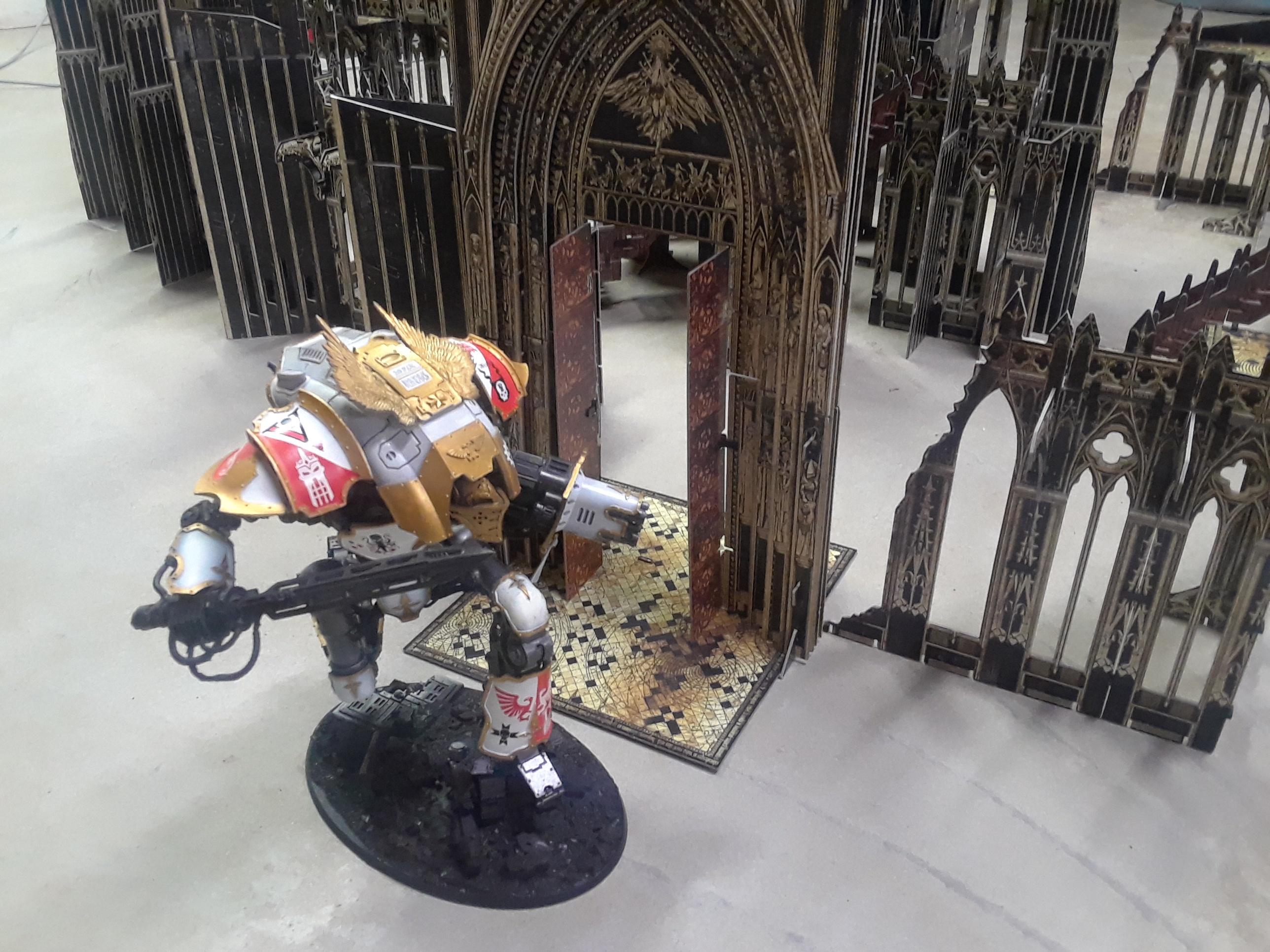 I was pleasantly surprised that the printing quality held up, of all the things involved with this terrain KS, that was my biggest concern. It holds up, and the contrast is nice. I did not make any notice of details being cut off or parts being off center. Once all together it makes an impressive scene. The cardboard is sturdy but there are certain parts that need extreme care to not bend in assembly -  such as archways along the sides - are very prone to bending at clip points. Many scatter terrain elements had tabs which bent easily or off entirely. On the flip side the platforms are sturdy, and the bigger one, "High Command" held my resin Castigator.

The clip system works. However after 15-30 minutes of assembly the constant pushing and coaxing of clips was hard on the fingers. I eventually resorted to using the table, a ball peen hammer, and padded work gloves to minimize wear & tear while slotting clips. You really need to plan out your clip layout if you want to bling out your builds with all the extra greebles provided.

This review will go through a few things concerning some the marquee pieces. Instructions were provided as a QR code to a private youtube site which lists 36 videos as of this writing. I expected them to be something along the line of, “do THIS to make the scene you saw in the pictures”. Maybe even a PDF showing layouts they used. But more than half of the videos are for the scatter terrain, the rest cover SOME of the major assemblies, and one of them is exclusive to the extra large kit backers (which was helpful for ideas). Perhaps they’ll add more. I found it to be insufficient for someone to make a casual go at this. If you’re watching the videos on a phone it can be very frustrating as the assembler points to a clip (there’s no talking in MOST of them, just a very, very repetitive soundtrack.) and you’re squinting trying to see which one it was.

My naming convention for each is as named in the assembly video list:

This piece has the largest footprint of the lot and appears front and center in many of the promotional pieces. It makes use of an angled clip which is infuriating to use and was single-handedly the most stressful part of any of the builds. The windows are long and skinny and prone to bending when pressing them together with the angled clips. The upper part of the flying buttress does not attach to the structure, which is annoying to my propensity to secure things. Seems prone to bending as I almost did it myself just moving it around. There is a part shown in the promotional images (Tryptic, per the backer info) that is provided, but there are no clip slot cutouts where this very specific railing is supposed to go. It won’t fit anywhere else, I tried. 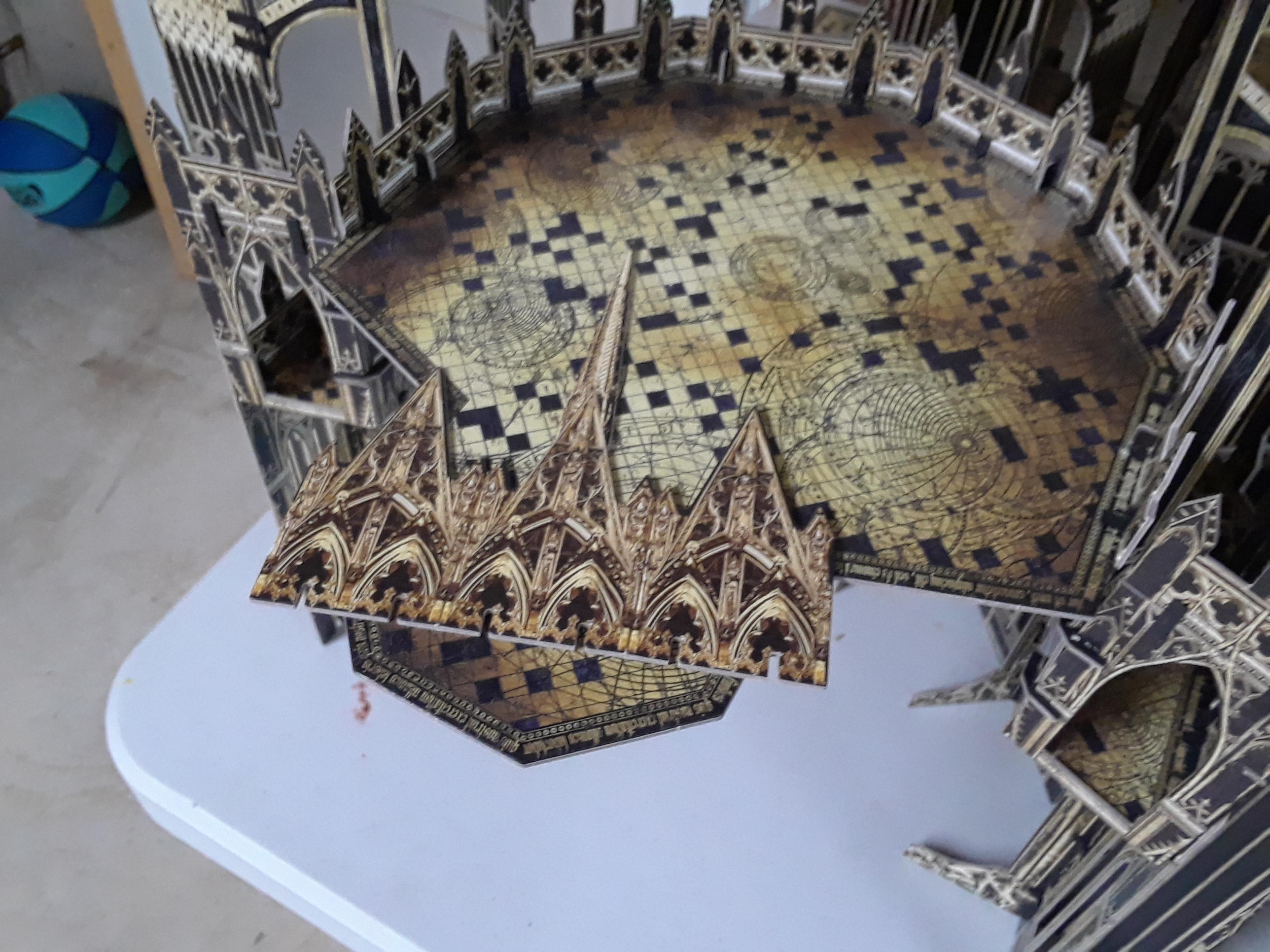 Heavily used in the promotional images, however what you DON’T see clearly is that the stairs cannot attach flush to the platform. The stairs have tabs extending from the sides that intersect the angled platform preventing the clips from fully attaching. It looks janky. I cut off the offending tabs since they’re an integral part of this platform.

This assembly video specifically deals with parts from the Daedelus extension, but has a generic title card, so if you’re a little confused and wondering if you’re missing parts before realizing it’s just something you didn’t get, you’re not alone. No other assembly videos pertaining to wall builds for the cathedral, which make up a large portion of the frames provided. I ended up looking at the promotional photos for ideas on how they might have put them together but ended up just doing my own thing.

I opted for making four tall and two short towers instead of 2 super tall and 2 tall towers as advertised. Ridiculously tall for a tabletop game, there’s little to no units that would end up going that high, much less get there, or have any tactical reason to do so.

Looks cool but the bases provided suck and slip off super easily. I actually used two inverted toppers for bases from the :”Triangle Tower” build. I think they missed the mark on these. If they simply made the slots at the bottom of some of the screen the same width as the slots on the floor and platforms it would have offered up some better alternatives. 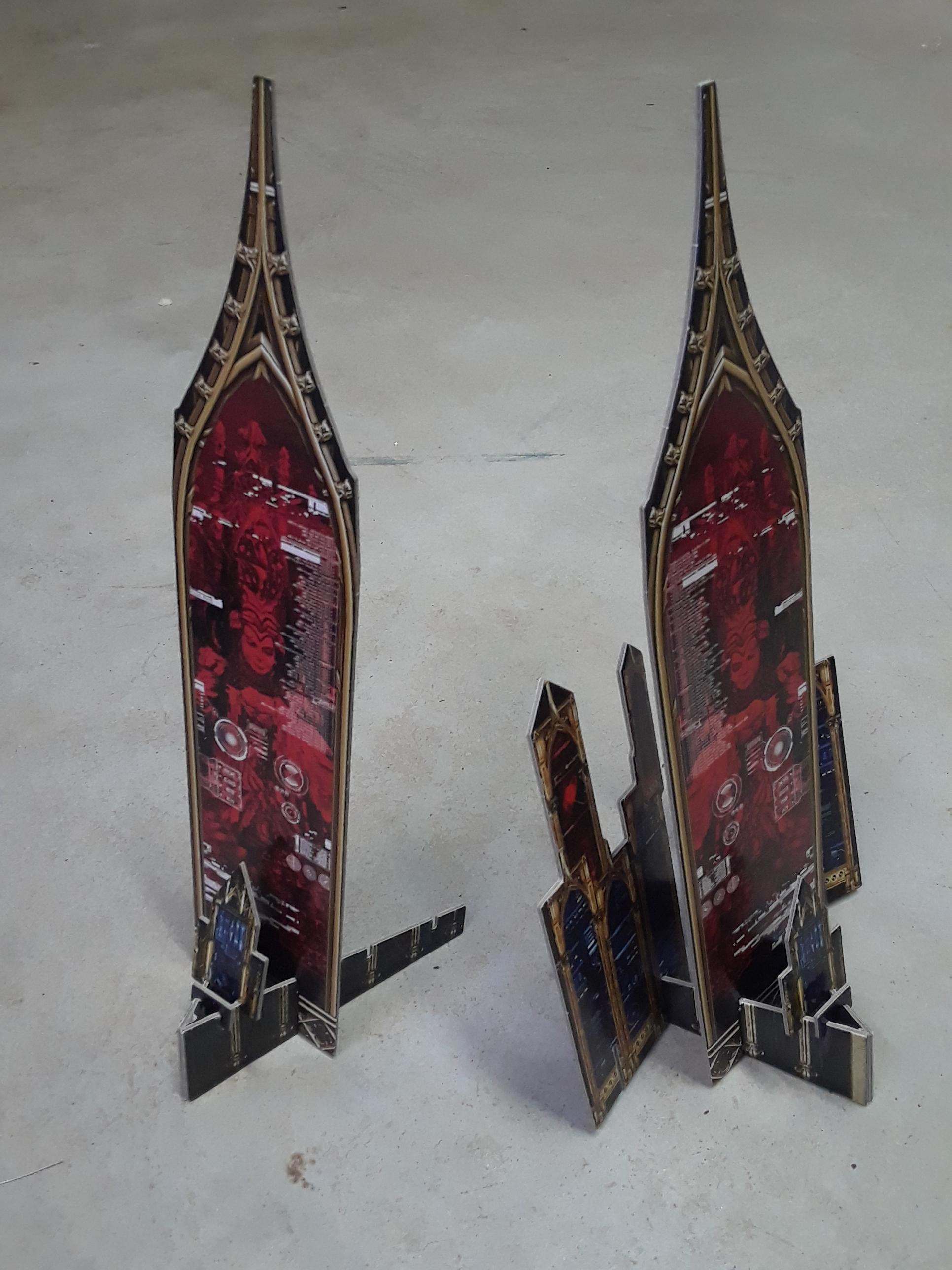 As of this writing the video for this part has been taken down for some reason. Very fiddly construction and I was sweating bullets trying to get all the big pieces slotted the way they show in the video. Biggest golly gee is this platform they put up at the very top. It’s a 1x4 pierce that has slots all the way around and they don’t even use any of them. I ended up removing the platform, used extra connectors to shore up the gates and used the platform to build my walls. The hinge clips are not that good and come apart easily when moving the doors. I was short two clips to fully install the doors for all three gates, but I actually prefer to use the right angle clip for an open position and the single straight clip for closed.

You get two bell towers but an extra two of the top half, which makes for an odd piece on the tabletop as scatter terrain. Luckily some of the parts can be repurposed to make a small riser and alternative guardrails. 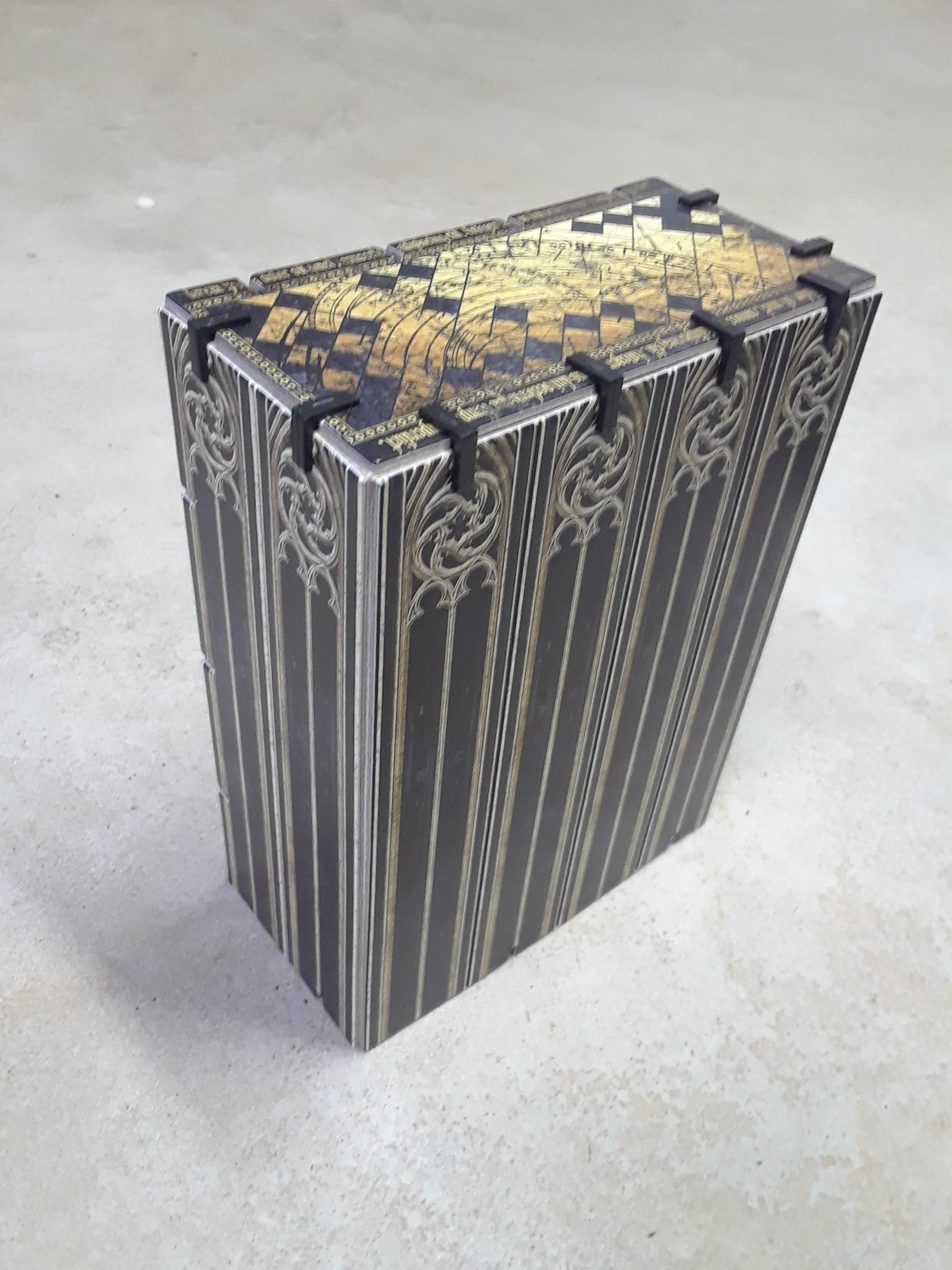 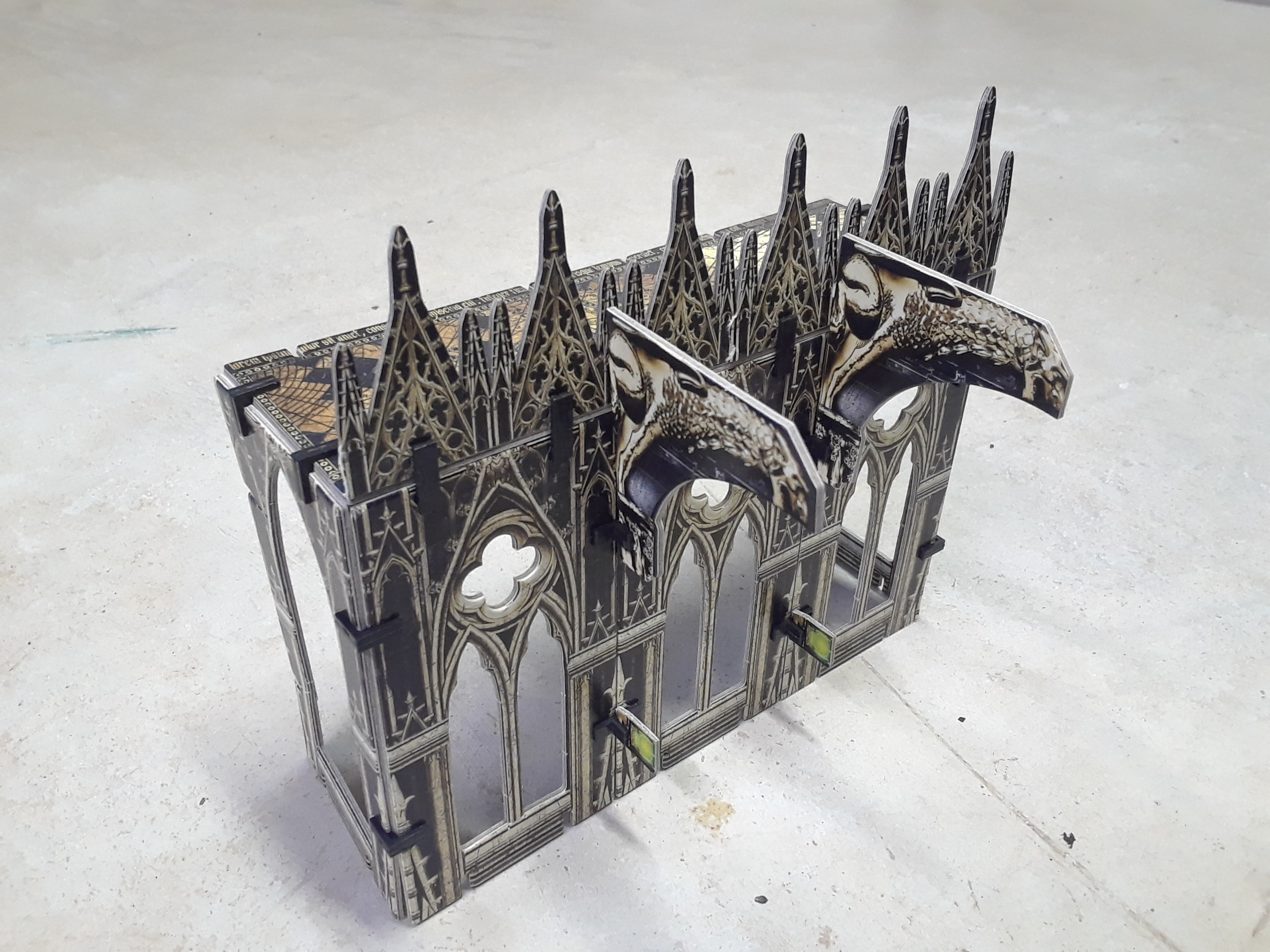 I liked most of the little bits. The crates and bookcases are solid, and a lot of the computer screens and displays have many ways of being added to the terrain. I passed on the candelabra and trimmed the lights down to use with clips and added them as interior / exterior lights. I didn’t care for the Pipes, Air Recycling Unit, Med Station or Fireplace and let my kids put them together and keep them. Either the construction was janky or I just didn’t like the look of the finished piece. I’ve got plenty of resin and plastic scatter terrain to use instead.

In the end, I had a lot of walkways and other random bits leftover, which is fine. But there were these pieces which never came up in an assembly video, nor could I divine any use for them as the slots don't match up with ANYTHING. 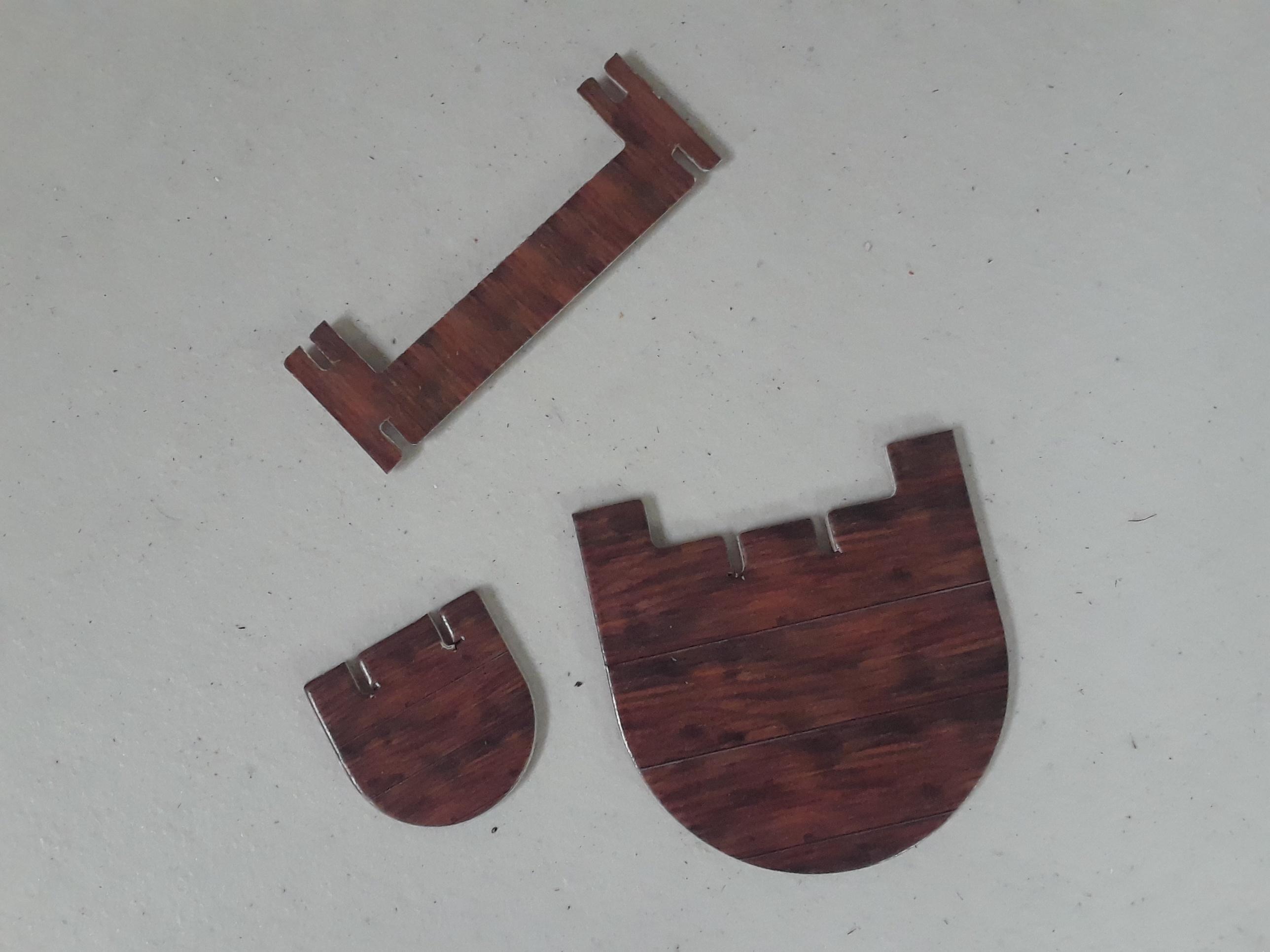 "My blood is the same colour as yours. And what I do, I do to protect Earth, same as you. You don't like how I do it, that's your prerogative. But there are things going on out there that you know nothing about. Threats to the human race that no one never hears about, because we stopped them. There are dangers all around us. And whether you like us or not, we may be all that stands between you and the abyss."
- Bester, Babylon 5

I use a dark background for B & C and cannot read your post without highlighting all the text.

I use a dark background for B & C and cannot read your post without highlighting all the text.

Thanks for the heads up, I changed the font color to improve readability.

"My blood is the same colour as yours. And what I do, I do to protect Earth, same as you. You don't like how I do it, that's your prerogative. But there are things going on out there that you know nothing about. Threats to the human race that no one never hears about, because we stopped them. There are dangers all around us. And whether you like us or not, we may be all that stands between you and the abyss."
- Bester, Babylon 5

Thx for the review. I didn't back it at the time 'cause I don't really like cardboards as terrain system and I need everything to be 3d, not just some printed details.

Other than that for gaming purposes it sure seems to be very cool.

Back to + AMICUS AEDES +

Also tagged with one or more of these keywords: terrain, raging heros, kickstarter, review