161 replies to this topic

I like the heavy change to the galvanic guns. Makes them seem more like the old type line infantry muskets. Losing rapid fire hurts obviously but fluff wise it fits, and game wise they should be back line anyway.


Losing rapidfire only hurts when you're within 15" and moved.

I’m hoping that onagers get double shots at under half move like the guard vehicles. This would make the neutron gun so much better and make up a little for the loss of our old special vehicle rule of move and shoot.

I like the ranger buff, my guys were back field anyway. Now I get double shots at full range and an extra AP. On a random note, I did equip one of my ranger alphas with a hand weapon and a rifle, I hope we get to keep that combination, so I don’t have an outdated model configuration.

and I know we have a lot of new units, and are getting the Marshall, but with a slow trickle of sister of battle models including their new heavy infantry preview, I hold out hope that we will get one more goodie as a surprise.

So many good things here, but I will leave my deeper thoughts for the admech forum, however it's really good to see the damage output of low level units become more appreciable especially with the escalation of damage present in 9th ed.

The interesting thing to see here is the costs associated. Most of these units are still paper, and will disappear to a sneeze so it has to stay relative.

The thing is we could still see changes to vanguard weapons.... they might have held back on that one.

More shots, more reliable damage output. This change would make the enhanced data tethers worthwile if they stay as they are.

I took ballistics in school. Fascinating subject. Things go up! Things go down!

Some really interesting changes! I love rangers so pleased with that change.

The fact they are previewing codex and it’s due really soon puts the nail in the coffin of the small remaining hope I had for anymore new units coming.

Some really interesting changes! I love rangers so pleased with that change.

The fact they are previewing codex and it’s due really soon puts the nail in the coffin of the small remaining hope I had for anymore new units coming.

Agreed except.... that one art image we still don't know if that's some artist's interpretation of the "Cawl Inferior" or something similar...

I think we saw all the new units we're going to from last edition.

Ruststalkers + ap2/3 = Keep talking you have my attention...

I was thinking about having ten Fulgurite Electro Priests but if Ruststalkers manage to improve considerably I might waver when deciding between the two. I like the models for both so picking a favourite isn't that easy for me.

I definitely won’t argue that Tesla weapons didn’t get the shaft (they absolutely did and need a buff), but I always thought of Tesla as more anti-infantry and arc as more anti-tank.

I was thinking about having ten Fulgurite Electro Priests but if Ruststalkers manage to improve considerably I might waver when deciding between the two. I like the models for both so picking a favourite isn't that easy for me.

It was what Rustalkers should of always been in 8th(Elite troop killers, with Priest being the beat sticks for monsters and Hqs) but I found 8th tried to bring everything up to the same level removing a lot of what gave a unit its identity. In 9th they seem to be using that level to bring back the flavour without going to over the mark(Incubi). I am still hoping for damage two for the Rustalkers as well but maybe they get another attack to do the same thing.

Arc should be something, that hits vehicles like poison but kind of like a wet noodle for everything else. I think this new stat line works well, it wont scare the enemy too much but it will finish something off reliably after you run out of the bigger guns while not making vanguard scare elites off the board.

The torsion cannon change feels thematically weird - the division between destroyers and breachers was that the former were backline fire support, while the latter were more resilient and in-your-face. Giving the Breachers a 48" weapon just seems odd.

Beyond being a weird combo, it doesn't solve the core issue of the torsion cannon - being a single-shot weapon on a BS4+ model. Now it's a S8 lascannon, but it still doesn't hit reliably.

Galvanic rifles look fun. Now there's actual competition with Rangers, as it should be. Before, Rangers were simply not good at anything in particular, except for being cheap fillers and maybe ablative wounds for the transuranic arquebus.

My main takeaway from this article though is arc weaponry. Their core downside (intended to kill vehicles, but only wounds them on 5+ and doesn't get through armour) was reduced, without making it the instagib OP anti-vehicle weaponry of 7th edition (wounds on 2+, no save, non-superheavies only have 3-4hp). Seems like a good middle ground.

Valrak has a vid up with the new AdMech releases 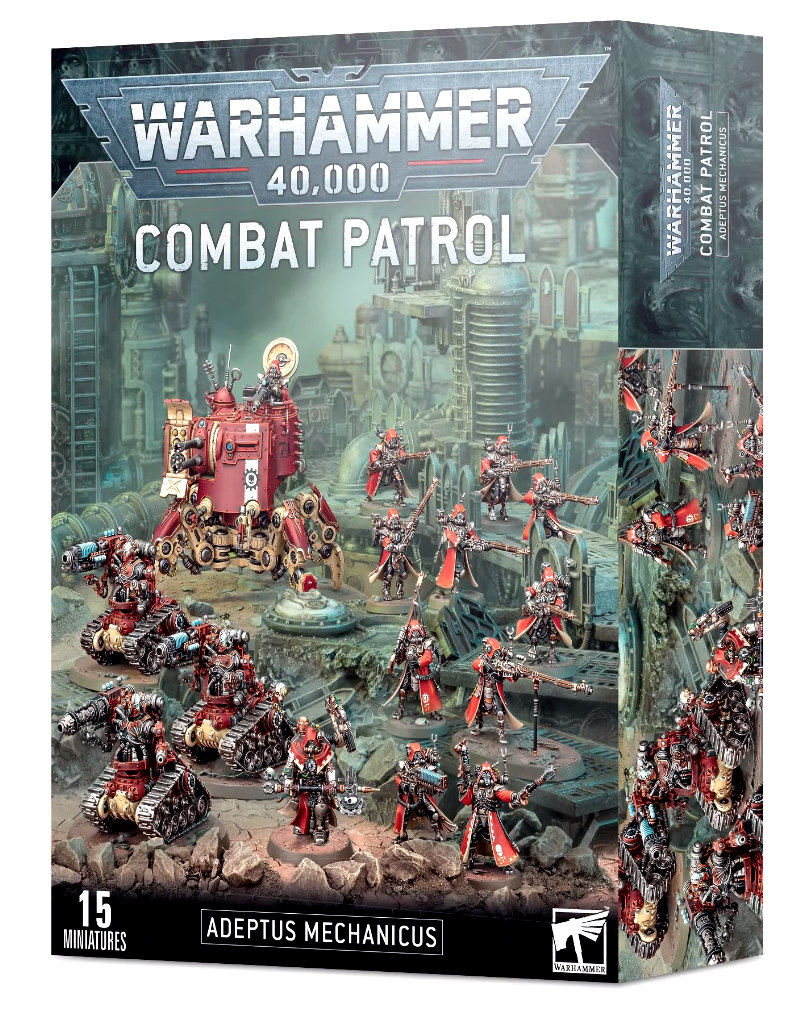 As someone who's starting Ad Mech that's a pretty slick box, I'm sure people who already have a collection it's not too great although who doesn't need more Kataphrons

Finally some news and the box is... meh.

Its a pretty good starter box, a good range of needed models but unfortunately I don't think thatmany who are already devoted tech-priests will want it as they have most of what is in there. It is nice to see the breachers in there

That box is great for conversion bits

Box looks pretty solid, tho i think not a big seller for existing Mech players. Was hopping for some cydonian goodness myself.

The Mechanicum Never Deletes Anything.

where be the dice?

I´ve yet to see them

"Every world is under Emperors might, then why i feel empty..."

I have only seen them on Valraks video, a nice and simple colour.

I’d be more excited for the CP if it wasn’t just the sc box with kataphron.

Oh well, glad to see dunecrawlers are back in, they make for great conversion fodder.

I’d be more excited for the CP if it wasn’t just the sc box with kataphron.

Oh well, glad to see dunecrawlers are back in, they make for great conversion fodder.


My Orks have waited a long time for lootin' of one.

...and whatever fading hope I still had for a stealth release of plastic Servitors alongside the AdMech codex is fully snuffed out.