76 replies to this topic

Lets look at this Abomination another way...

I just found my First disciple of Khorne ....

2.put severed head with hair hanging from her left fist ...

3.add a suitable Khornate Axe head to her other hand

p.s. seahawk...my thought as soon as i saw her was the Necron bodyguard guy... his excuse for being super static... he's practically a mindless robot

Boring mini but I do like her hitty stick.

Not a fan, the face and shoulders are bad. She’s just behind the Daemonifuge sister for bad face award.

I’m glad she came with a helmet and the weapon is ok maybe this would be a good kitbash project with a regular sister.

The shoulders and robes/arms just don't loon right. Just really...dunno the word. Just off. Don't like it.
The helmet looks great though.

She looks like she enjoys her work far too much...

Sisters, ad mech and orks to come for 40k. Are we aware of anything else?

This is first time I've looked at a model, and was like, NOPE

There's something....off for me.  Don't get me wrong, I love the concept, actually, maybe it's another case of horrible GW photography, or a bad combo of paint scheme. I want to like it, but I need to look at it unpainted.

I honestly believe that a lot of the issues with this model, if not all of them, stem from the upper part of the robe covering her torso and arms. It makes for an awkward silhouette and a stiff looking pose, and being unable to see the flex of her arms detracts from the "power pose" they were going for. Instead, the red cowl + white gloves combo makes her hands look floaty and weird, and to be frank, the cowl itself reminds me a bit of the sort of cape they put on you when getting a haircut.

Doesn't help that the photos we got are directly from the front and back, which I can only imagine make her look even stiffer.

OMG what a ugly sculpt!
The idea of a SoB "Chaplain" being in charge of the Repentia/Mortifier stuff is nice but the model is so ugly that the old Dialogus is a top model compared to the Dogmata

As some have typed earlier something seems off with the mini. Lets see how the 360 of the mini looks when it comes out.

I assume Sisters codex is next after AdMech?

Haha what's with her funny face?

This model is quintessential sisters, just need her in the new baby carrier with a rattle

Really really ugly... that face is way off.

I honestly believe that a lot of the issues with this model, if not all of them, stem from the upper part of the robe covering her torso and arms. It makes for an awkward silhouette and a stiff looking pose, and being unable to see the flex of her arms detracts from the "power pose" they were going for. Instead, the red cowl + white gloves combo makes her hands look floaty and weird, and to be frank, the cowl itself reminds me a bit of the sort of cape they put on you when getting a haircut.

Doesn't help that the photos we got are directly from the front and back, which I can only imagine make her look even stiffer.

And her chest+shoulder plate?
How it Is shaped makes diifcult for the Dogmata to move her arms and to perform any combat action
The pose is ankward, the robe is silly and again prevents her to move freely in combat
And the face is plain ugly

This is a miniature bad designer and even worse sculpted

Personally I don't really mind the basic pose in itself - not everything needs to be overtly dynamic. However the execution here is quite lacking. Maybe it's just the picture, indeed as others have said the hands/gloves look HUGE, and the grip is on the narrow side, making her look bunched up.

Also the the shoulder pads being apparently a single piece with the top of her torso area means she wouldn't even be able to raise her arms past horizontal, if even that. 40K isn't exactly a great place for ergonomics in general (just look at terminators) or functional things in many cases, but that's just dumb to look at. Being overly clothy doesn't help either.

Also as sitnam said, not sure why a "chaplain" when there's priests already. Overall where the initial Sisters models truly knocked it out of the park, this "second wave" isn't impressing so far, other than the Palatine being fine.

It is not a bad model but the pose is so static.

"The Nova Terra Interregnum has been remembered unfairly by those few who remember it at all. True, many malcontents, provocateurs and petty lordlings flocked to its banner when it seceded. But its attempts to contain the aggressive expansion of the Ecclesiarchy were born from an honest desire to uphold those values at the hart of the Great Crusade. It is ironic that the last gasp of the Emperor's true vision was finally throttled at the hands of those who fought in His divine name, on the planet that once reminded our Lord of 'Urf, long ago...'"
- Archivist & Historian Vedek Parsen, pilloried, emasculated, hung, drawn, crucified, quartered, burnt and disintegrated for heresy extremus. Probably in that order.

IMHO could be better but could be worse. Does it's function as a model it is supposed to be but doesn't really makes people want to stop and admire.

I think my main issue with the sculpt is how she’s holding her cruzius out in front of her. If we compare her to the AoS Lord of Plagues, her pose looks way unnatural: instead of the weapon resting on her belly like it does on the Lord of Plagues model, she’s lifting it off like she’s in the middle of a workout. 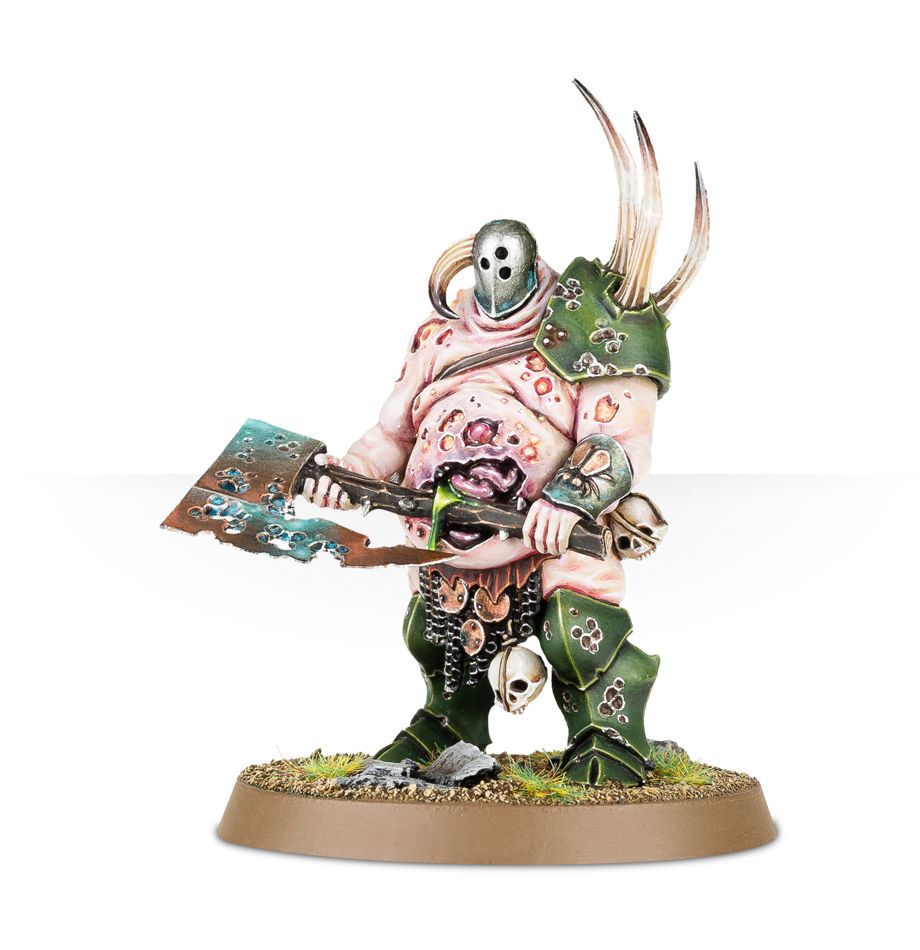 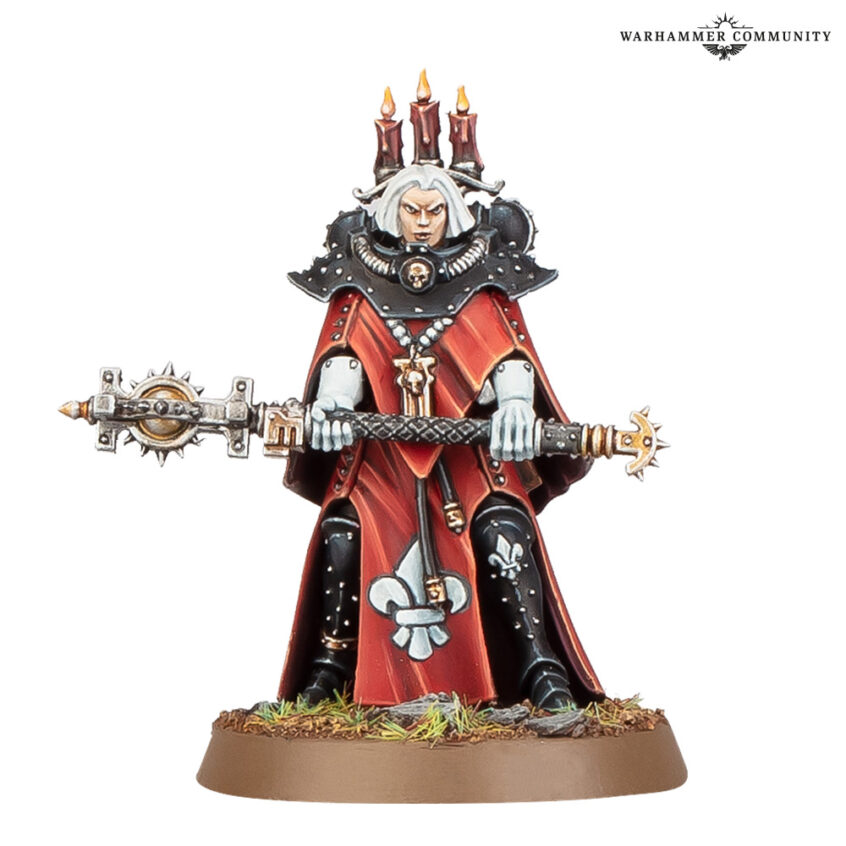 So that's three characters (one in a warsuit) and a tank so far this wave... But as of yet no sign of a potential new Troops unit which is the one thing really needed. Reveals aren't done yet though, so I'll hold out hope.

And for love of the Emperor did someone force the painters to paint every female face like a male one and make it look horrible? Sheesh.

And for love of the Emperor did someone force the painters to paint every female face like a male one and make it look horrible? Sheesh.

Essentially, yes. GW's painting style is (or at least was last time I was in touch with an Eavy Metal candidate) strict. It doesn't leave much room for personal touches or subtlety. A long time ago things were more free-form, but it all got codified and the standard of painting was reduced. The idea was to make the models seem more approachable for the average gamer, something that they could achieve with practice, rather than something that was Golden Demon tier. There's no doubt that any of the Eavy Metal team could have made the Sisters look more feminine if given free reign, but they have to conform to GW's standard and set way of doing things, using the same recipes and techniques across all the ranges. While it makes GW's catalogue more approachable and cohesive, some ranges just suffer because of the lack of flexibility. Sisters are one such range, with the deep shadows and stark edge highlights making them appear more masculine (and in extreme cases giving a five o'clock shadow

). Mechanicus are another, where all the metal with it's shap edge highlights confuses an already confusing model's silhouette, kind of like a Michael Bay transformer.

Things have improved over the last half a decade, with a bit more variety and different techniques beyond base + wash + edge highlight starting to creep in. But IMO Eavy Metal, while excellent from a technical standpoint, are still behind some other gaming companies painting studios.

I'm lucky in that I liked everything previewed so far- it isn't going to be a chore to buy these- I'm looking forward to it.  Especially Paragons- I have 10 SoB Walkers so far- I see at least 6 Paragons joining that list.

I also bought Blood of the Phoenix- I'm glad I did too; the fact that scourges came in Piety and Pain and Incubi are in the CP box gives me ten of each, which I like because it gives me the flexibility to field 2 x 5 or 1 x 10.

As at stands, P&P sold out in minutes and the Combat Patrol boxes too; I don't think GW is getting mixed messages- they know there's a market. It does give me hope. It's going to be a while, if ever, before I get to build an Admech force, but I think I'll be buying the dex just because I love looking over Crusade content for armies I might want to play.

Just an awful awful model, looks like the face was sculpted by forgeworld, she looks like an anime character. Considering how good the rest of the sisters range is, they've really fallen off here. Probably rushed to meet the new battle box hype.

This is just a friendly reminder that this topic is about the Dogmata model, not any other models in the range. If you'd like to talk about other Adepta Sororitas models, that's what the Adepta Sororitas forum is for.

I think I've worked out what's off with mini - she doesn't seem to have any elbows? 😂

For me its the first Sororita Model which look really bad. Even the new Walker/Terminators are not that bad (not great but not terrible).

Another miss. Unfortunate string of those lately.