294 replies to this topic

Just found a couple more pics from before I undercoated, may as well throw them up.

2nd, one of my normal Berserkers, but one of the few who will have 'bunny-ears' (my warband are a bit of a mongrel lot, I reason only the pure World Eaters have bunny ears), and wielding a double-handed chainaxe. Nothing special, conversion-wise, but I like his pose, looks menacing.

Finished my berzerker squad. Wow, these were the first models that I purchased when I started playing 40k at age 14. . . they have aged.

You wish to see a unified Twelfth Legion, yes? -Khârn

Update: Did some work on the Chaos Lords, but I need to get a new small base brush, which means I can't work on them at all now 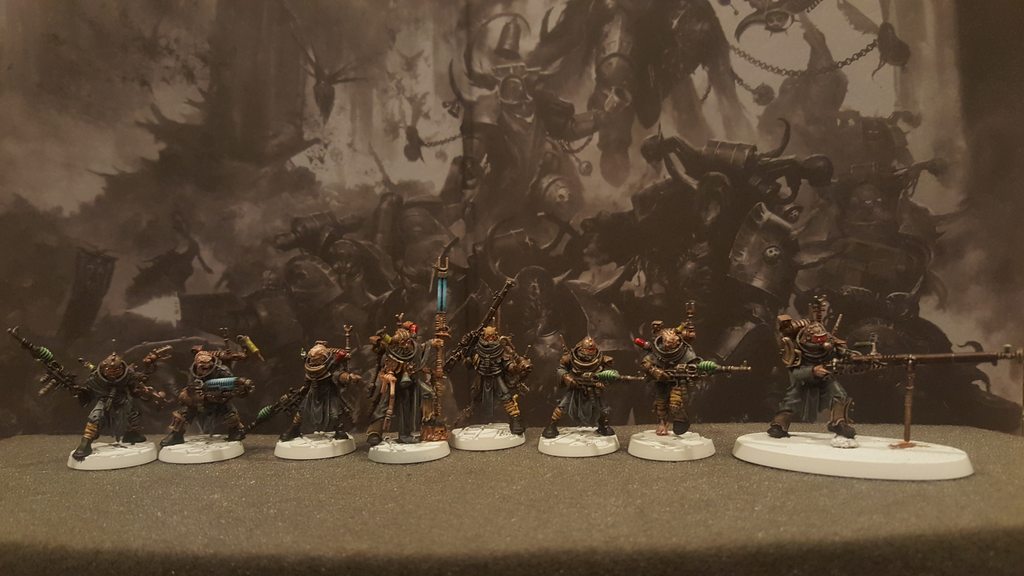 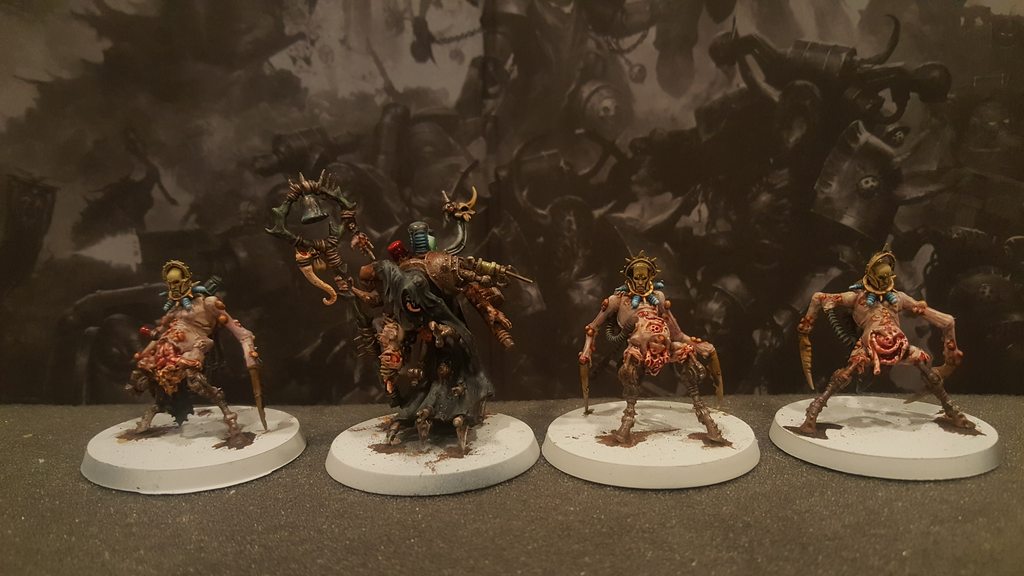 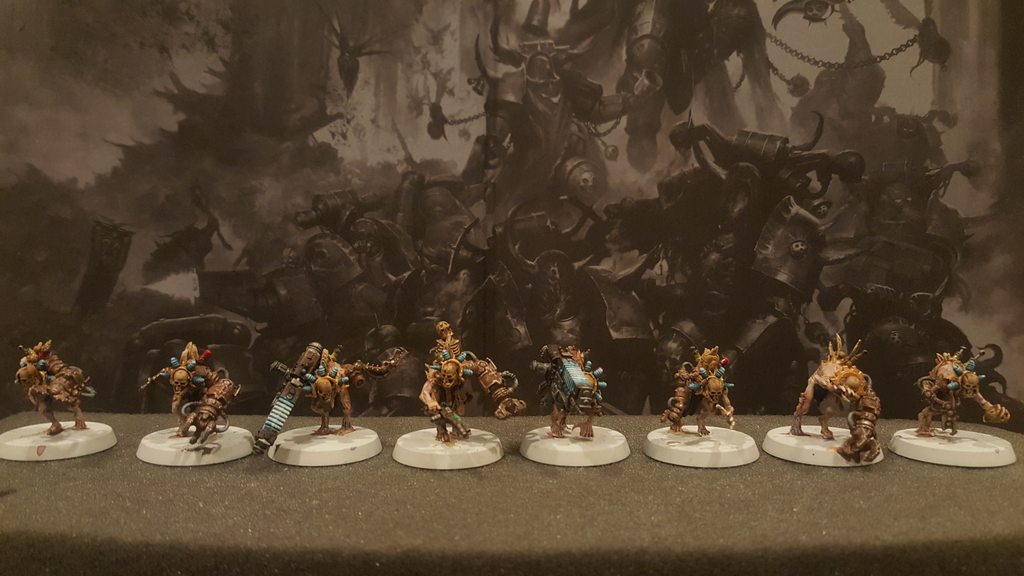 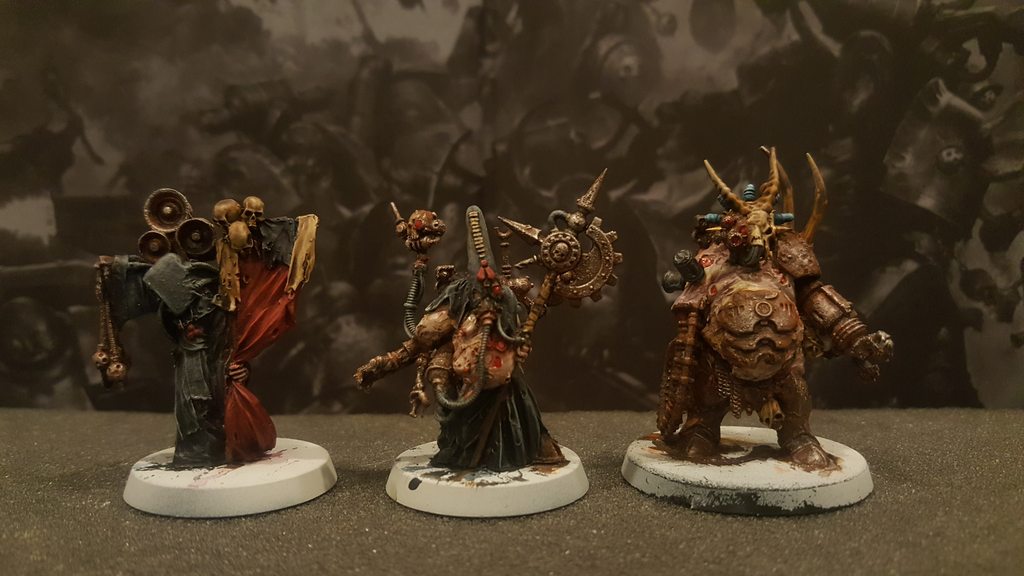 All of the completed models thus far 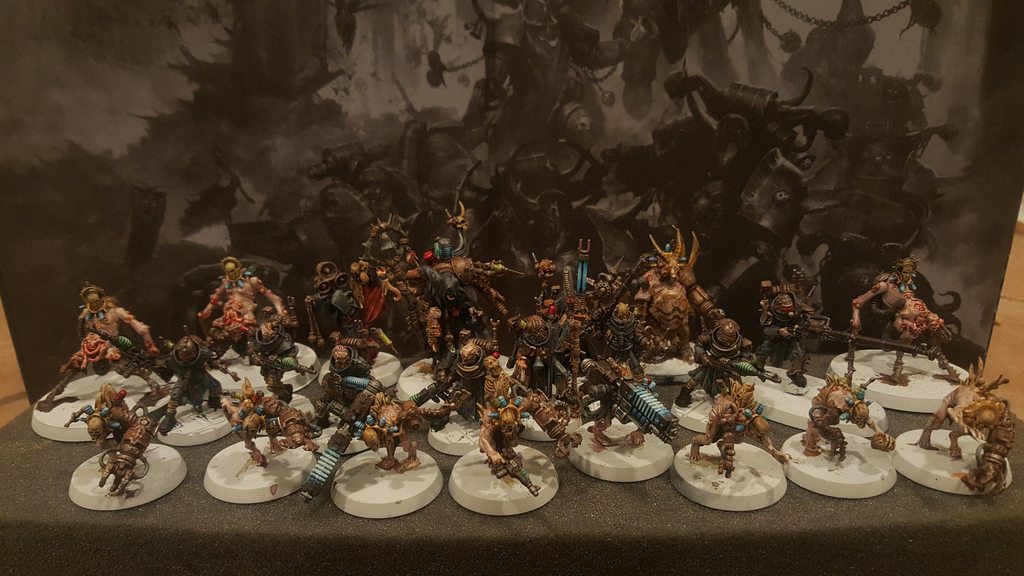 Absolutely stunning Duskraider, almost makes me ashamed of my efforts at Dark Mechanicum. I better shape up!

Just to show the unit Berserker, Rhino & 3 Maulerfiend update from my army log

The World Eater are nearly ready that 2000pts & for there first game which is next week.  I've just got three Berserker left to build & there still so much painting to get done as I general dislike using unpainted models in my own games.

Just built up the Berserker yesterday.  Orignaly going to be a member of the Wrath warband, but I ended up losing the side part from the FW Berserker.  Though I would just make him as a member of my own Iron Warriors.

I wanted to try & see if the Ork jaws would fit & something maybe look into using in future conversion.   I'm pretty happy how it turn out, again fitting with the narrative base on the Warhammer World campaign that my warband base upon.

How the squad looking so far.  So there one more member to add to them who I will aim as a member of the Wrath warband.  I'm just waiting on a order for the Wrathmonger icon, just since the models where release for Age of Sigmar I've always wanted to use those icon when ever the time came to collect World Eater.

Then there Rhino transport which I just started painting this afternoon.  So the Rhino will get painted during the weekend & then the usely weather powder, etc..

Then the Mark of Khorne using the stamp I've cut from sponge.

Then just got the Maulerfiend undercoated this afternoon as well & got the shade added.

How the warband looking since the last update.  As said I've got three Berserker to build, I'm just waiting on a few part to arrive & if friends remember to bring few bits with them as well for the conversion so there ready for there first game.

Actually finished this guy a few nights ago but forgot to get pics. That’s another part of my vow finished. I will probably go back and touch up a few sections of this when I get around to painting the rest of the unit but for the sake of this vow it’s done.

The Plaguebearers are done as well apart from the bases. I just keep putting those off for some reason. Same with the Plague Drones. They will be done in time for the end of the call though. Next up will be the two Berserker rhinos Sorry for the long time it took me to update... extremely busy week at work...

Anyways, amazing progress everyone, and the quality of the work is aligned with the best traditions of the Chaos crowd! And Atia has added herself to the ranks of the Warmasters!

I started working on my berzerkers and began applying the basecoat before I realized I hadn't taken my before photograph yet.

I hope this is acceptable. If not, I understand and will start over.

Finished my berzerker squad. Wow, these were the first models that I purchased when I started playing 40k at age 14. . . they have aged.

They have. But they do bring back memories and it's great that the Call of Chaos was the catalyst to finally get them done!

All of the completed models thus far

I hope I have updated correctly - let me know if otherwise. Top notch stuff man... as ever! 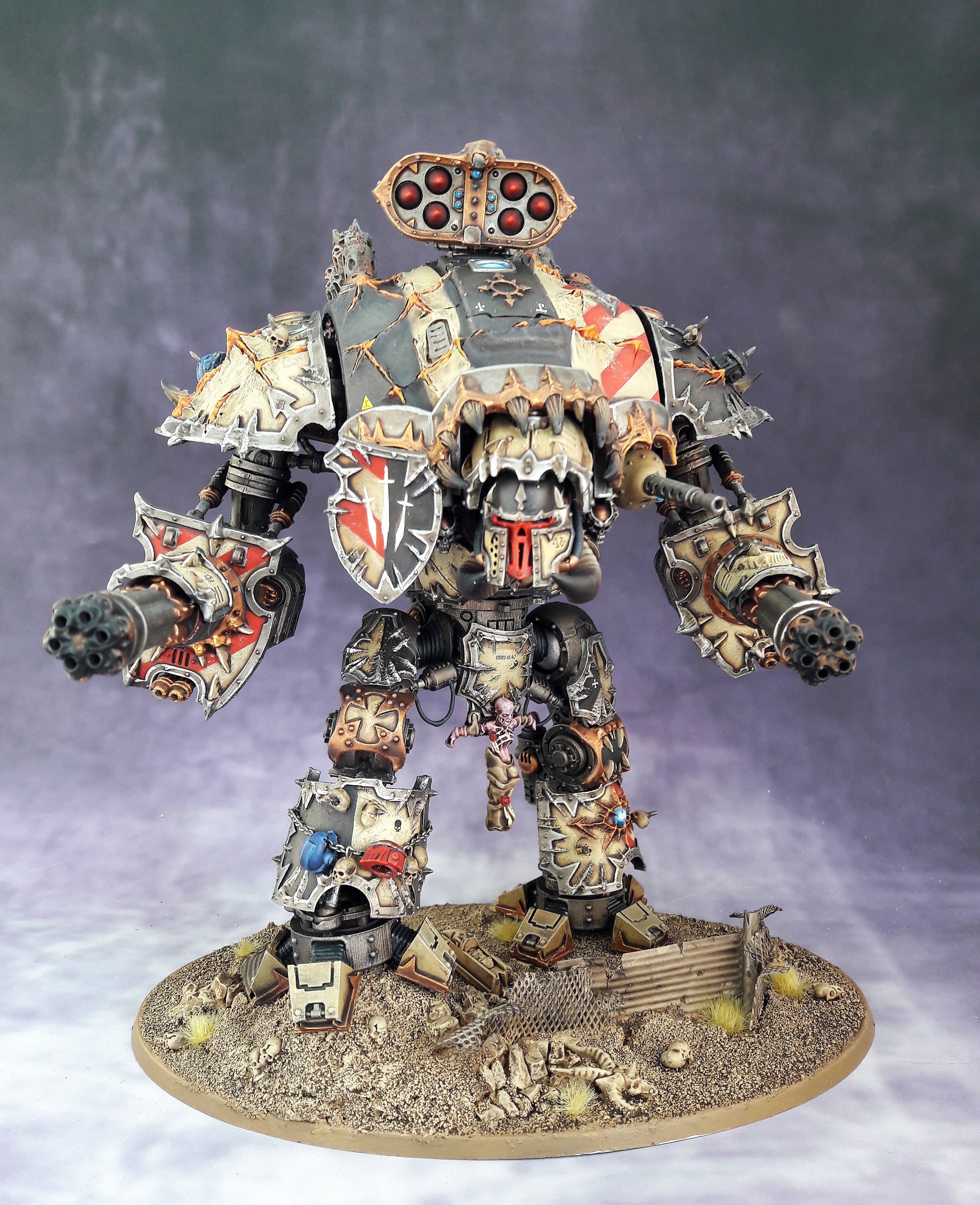 Yeah, looks like you got it all Semper! Thanks again and sorry for being such a pain in the ass with my counts-as shenanigans

You wish to see a unified Twelfth Legion, yes? -Khârn

My completed Terminator Sorc, plus two Rubrics... just to remind myself that I do actually have to do the infantry, and can't just do centerpieces all day.

just to remind myself that I do actually have to do the infantry, and can't just do centerpieces all day.

There's a reason why my CoC vow is just characters and and vehicles.... Mainly because I have too many characters that need to be painted

I can finally add some completions of my own

Ronogar, Lord of the World Renders is done: 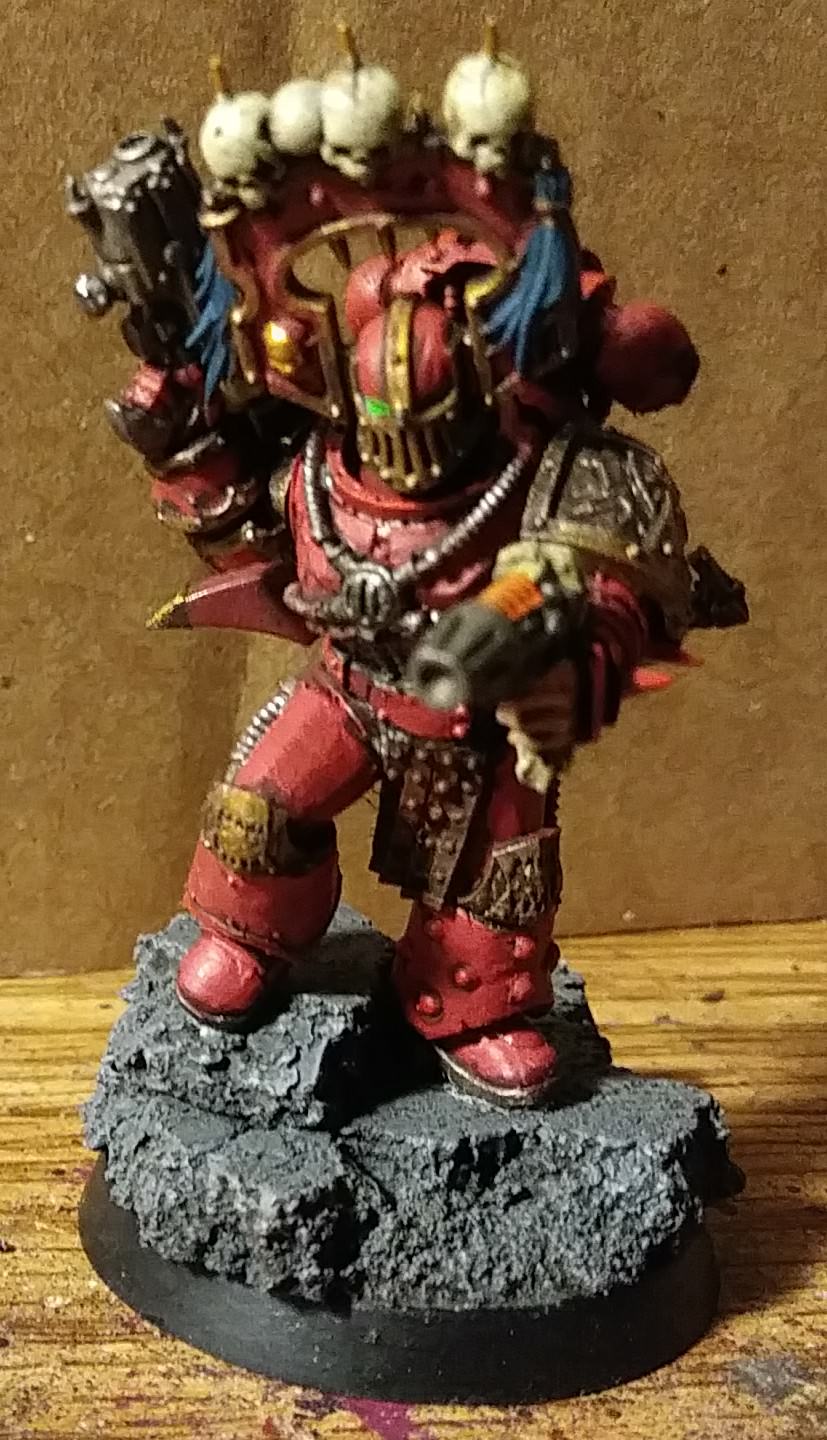 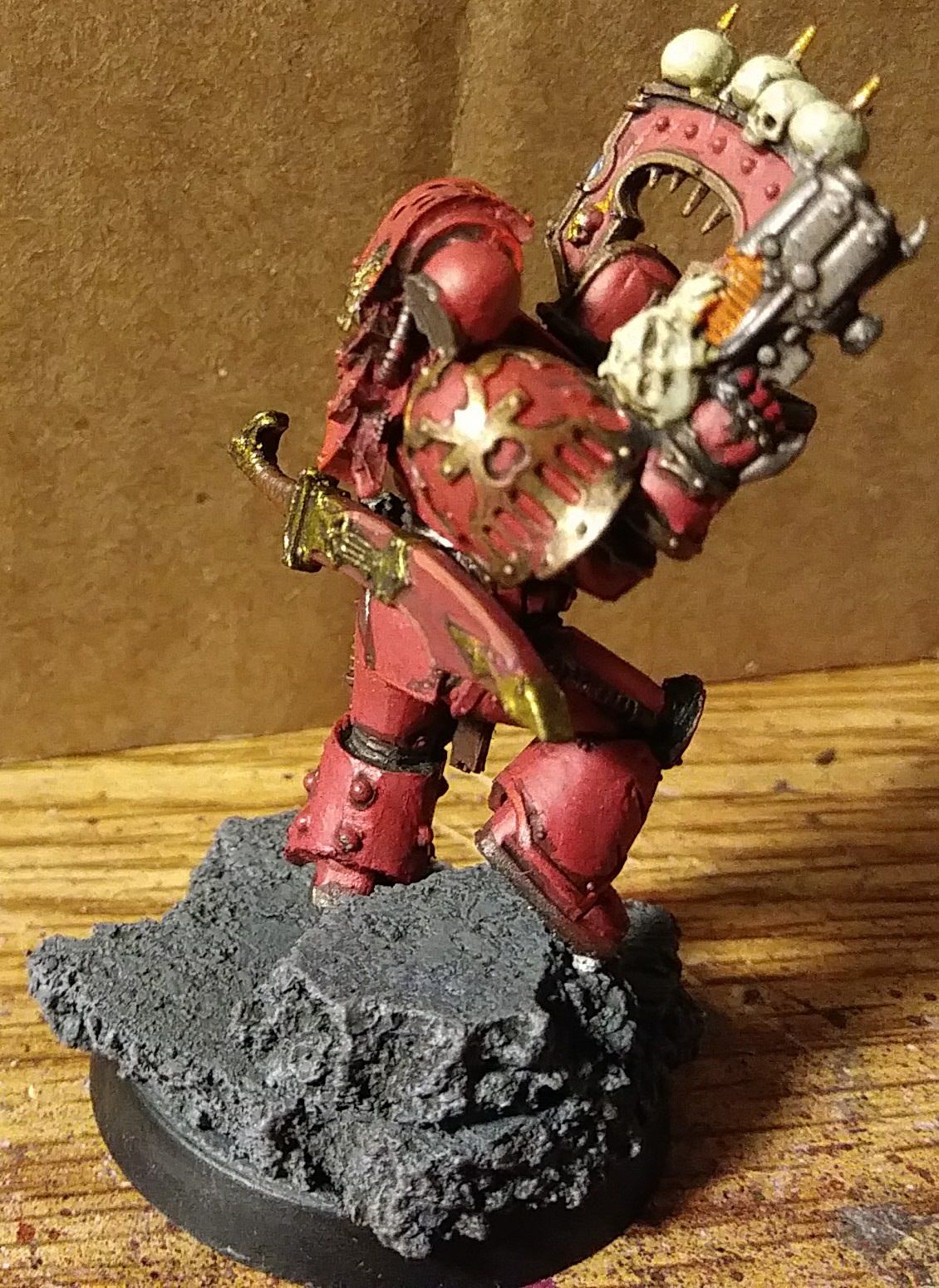 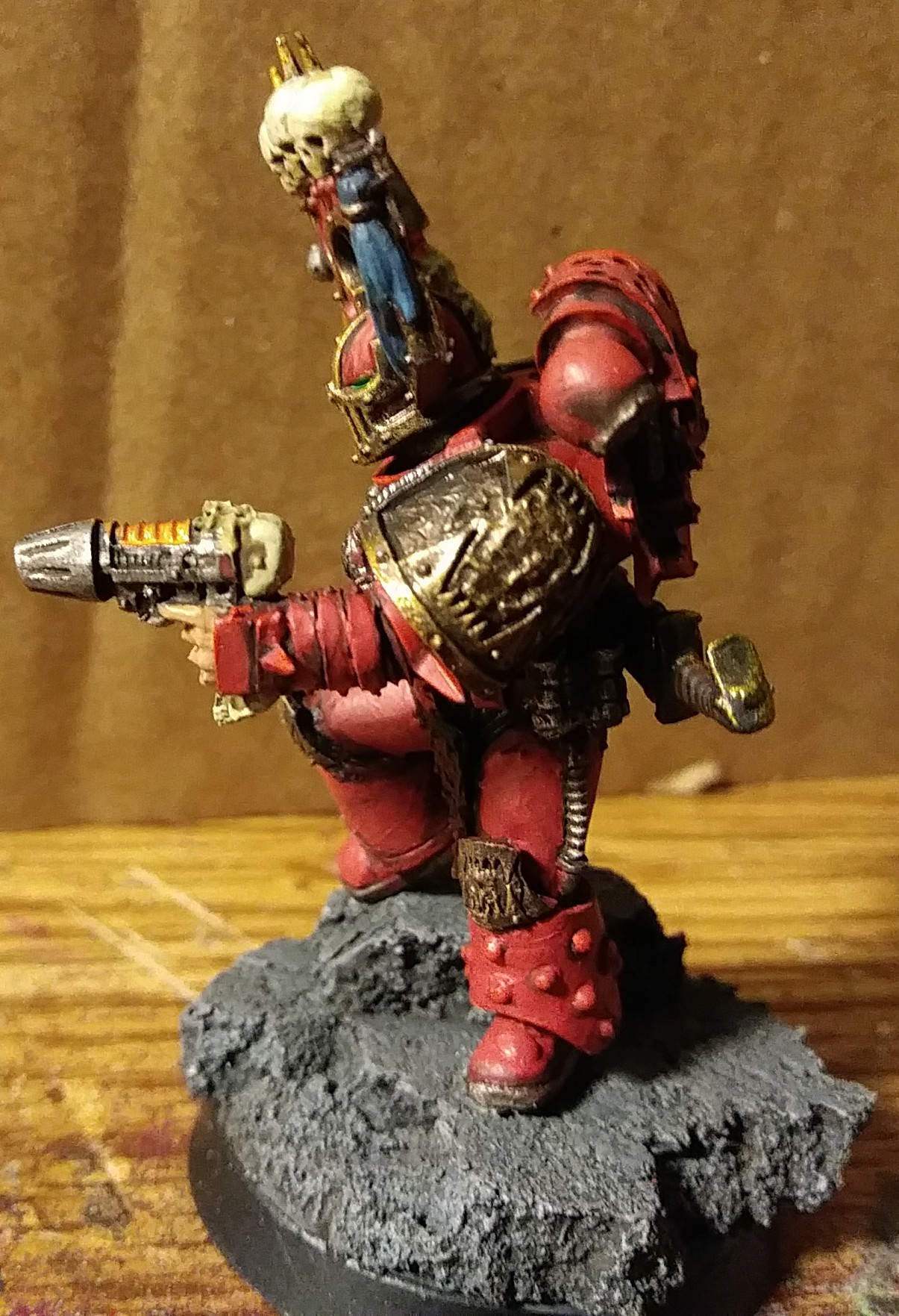 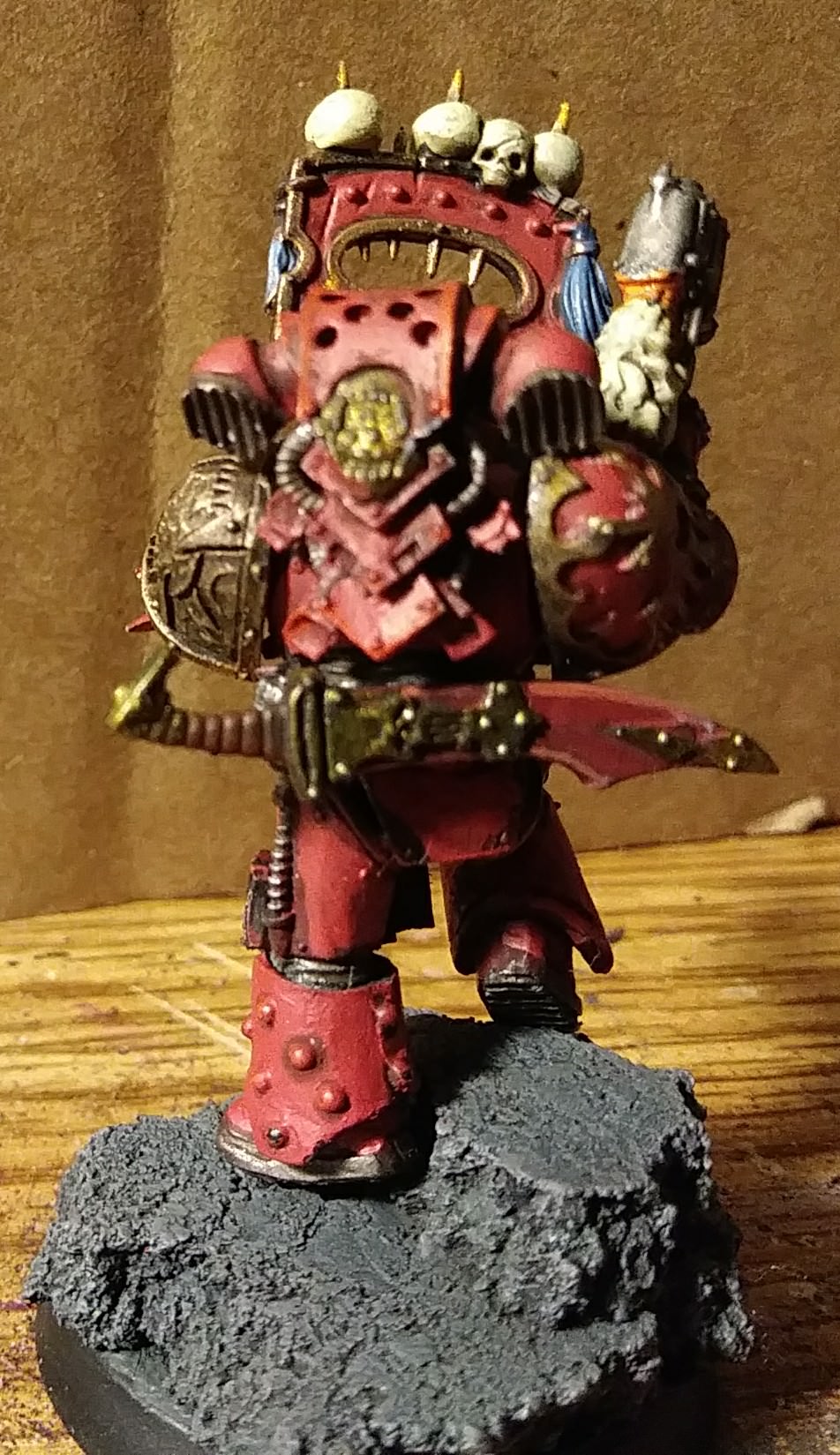 I also finished one of the Brass Scorpion's legs, but I'm going to wait until all of them are done and attached before I take a picture

Well today I realised I am not going to be able to complete the Call. Again. Like our glorious Warmaster Abaddon it seemed I will need 13 tries before I succeed. Real life concerns have taken up my free time. No matter, I shall embrace my spawndom and return better next year

My completed Terminator Sorc, plus two Rubrics... just to remind myself that I do actually have to do the infantry, and can't just do centerpieces all day.

Still plugging away on my vow, hoping to make some good progress this week with a bunch of work travel done

Small update - a few berserkers with basic colours blocked out.

I'm going to leave these like this and do the next 3, so I can shade and highlight them all together (I find that stage quicker than blocking basic colours in, and it's also when I like to be more consistent with layers, highlight colours, etc). Happy with how the colour scheme looks at this stage. 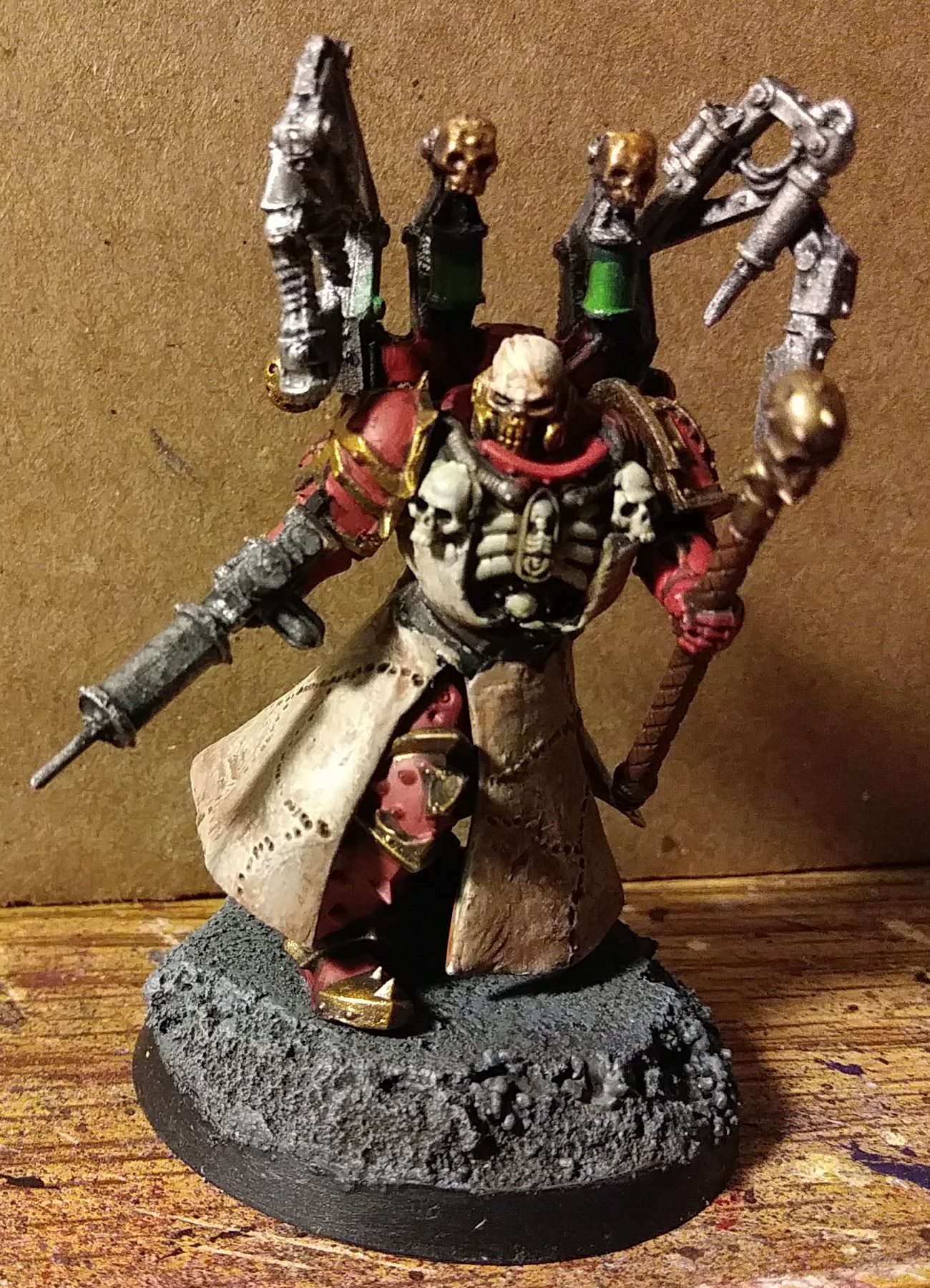 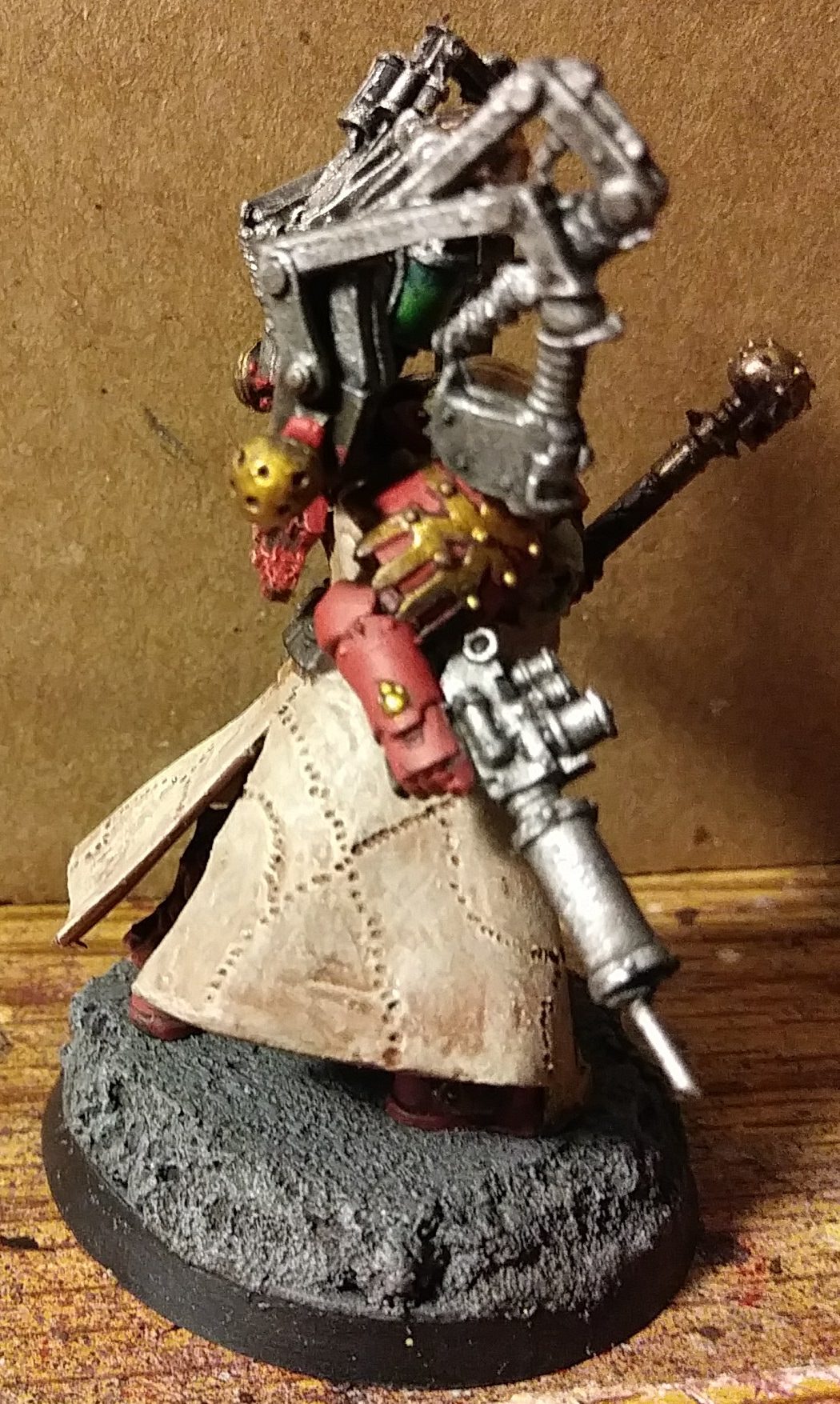 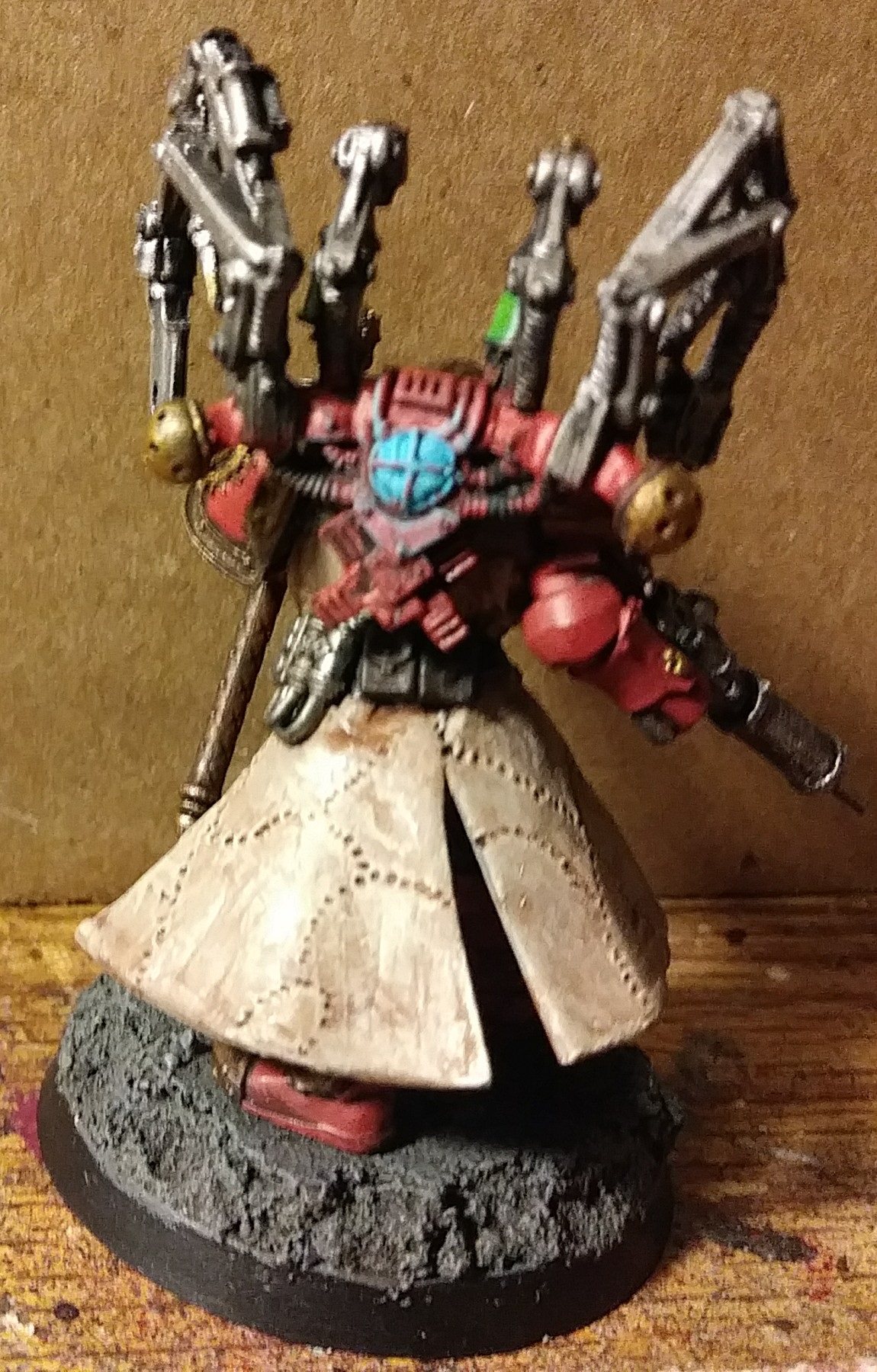 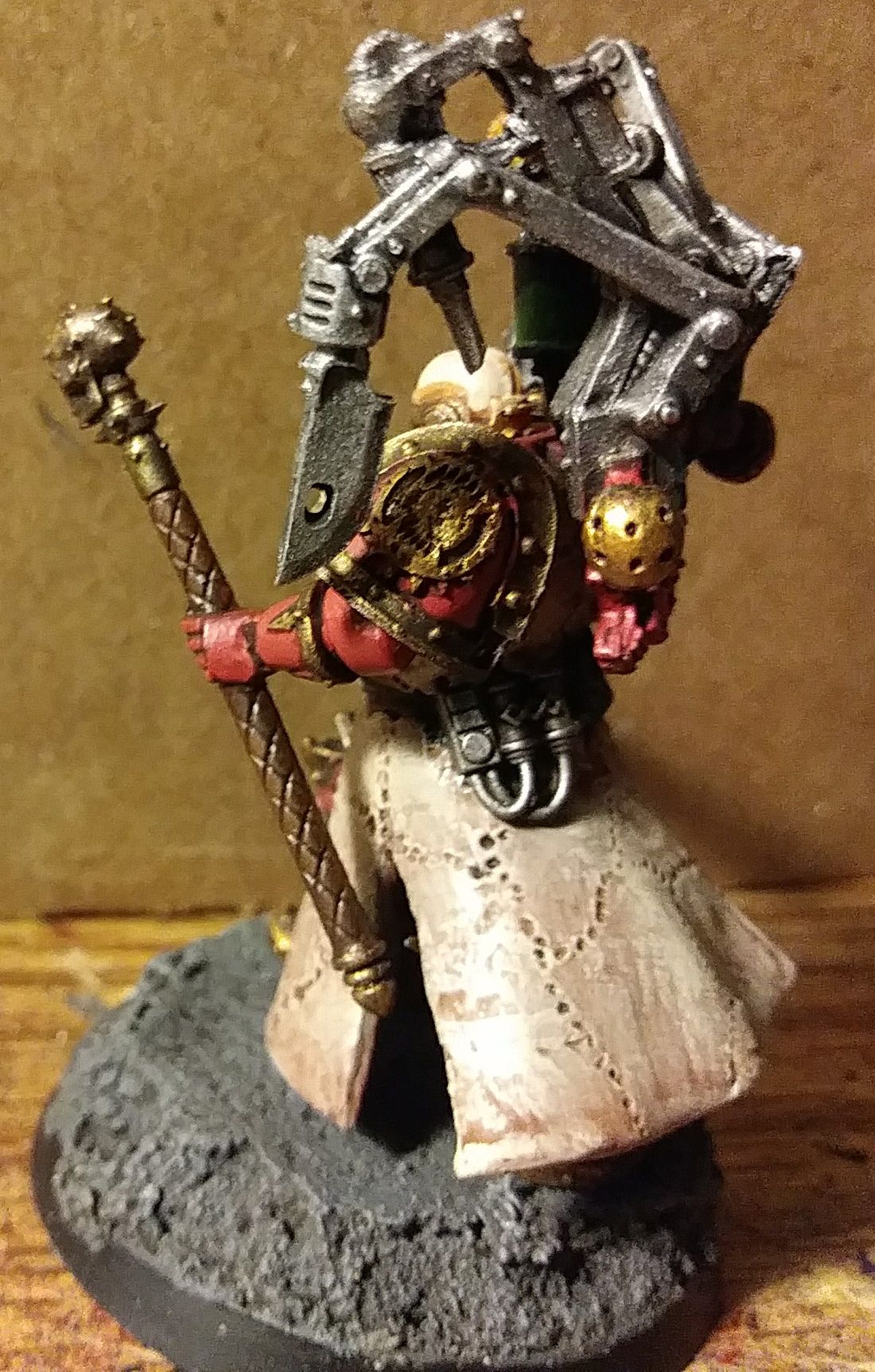 ... Well, technically I need to varnish him and then add 'Ardcoat to the vials on his back and some Blood for the Blood God on the needle of his gun and the tools on his Chirurgeon, but I count this as done.

Three down, five to go

Good to see some progress being made, let's keep the updates coming

After completing three of my units I've wasted no time and got my next phase assembled and primed:

Assuming my back isn't too bad I plan to get the core colours finished over the weekend... here's hoping or completion starts to look even more dodgy

To make sure I'm adding to the progress:

Excellent progress has been made this week, I may even finish them tomorrow with a bit of luck! Slaanesh is clearly with me

Awesome work in this thread - this is already shaping up to be a great CoC!

More progress to report! Finished my third unit of Bloodletters 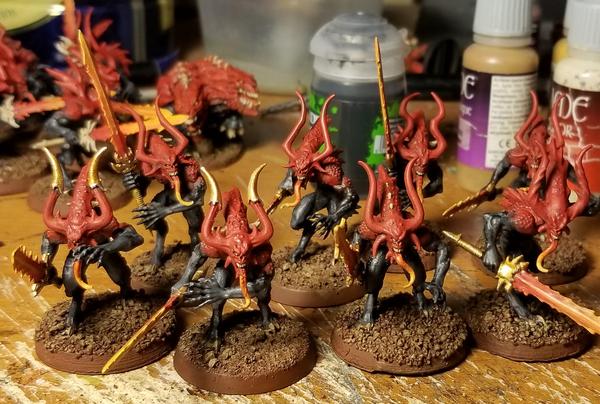 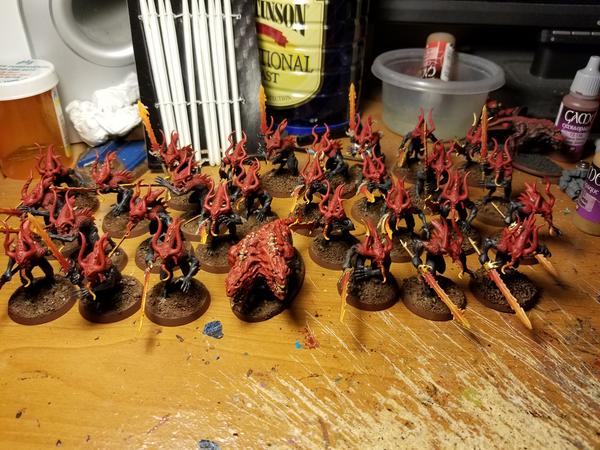 I'm glad to be done with the bloodletters but the last two units to go are basically big bloodletters. 30 models down, 2 to go!

I'll join with you some finished Daemons

Not as many though

Onwards to glory everyone!