FINISHED: Honoring the ETL 7 challenge: The Lions of Accon

After your marvelous results during this year's ETL, I now have to make good on the challenge I spoke out against Captan Semper and all of you brothers!

Spoiler
As i said here:

Secondly:
As a matter of honour, I will restate my challenge made, as an answer to Captain Semper's Challenge:

I, RikuEru, of the brawling Sixth will accept your challenge and honour it in turn!

IF the DAs get a higher ETL Score than the SWs by the end of the event, I will paint a 5 man squad of Primaris Dark Angels and the DA Lieutenant (Zahariel?) dedicated to the 5 top scoring DAs players and honourable (Captain) Semper. (The difference in rank is merely on GWs part and not a personal attack)

While my collection and bits boxes do not allow me to make the "commission" as customizable as yours, I will ensure all 6 of them will be converted to be characterful, worthy Sons of the Lion and painted to the best of my abilities.


Now I checked your amazing list of vows and completions in the DA Outpost, and if I counted correctly, these should be the 5 top scoring participants: (...but someone should re-check that, because I fear that Nurgle's Flu is impairing my mental capabilities.)

It'll take some time until I get to actual painting, because I want to do all 6 in one go and I am still waiting on bits for Captain Semper to arrive. (Because I decided to upgrade him... Lieutenant Zahariel will join them another time. The Captain should be a Captain. Always.)
But, thanks to having nothing to do due to the flu, I atleast have something to show you! Behold! The Veterans of the Lions of Accon! 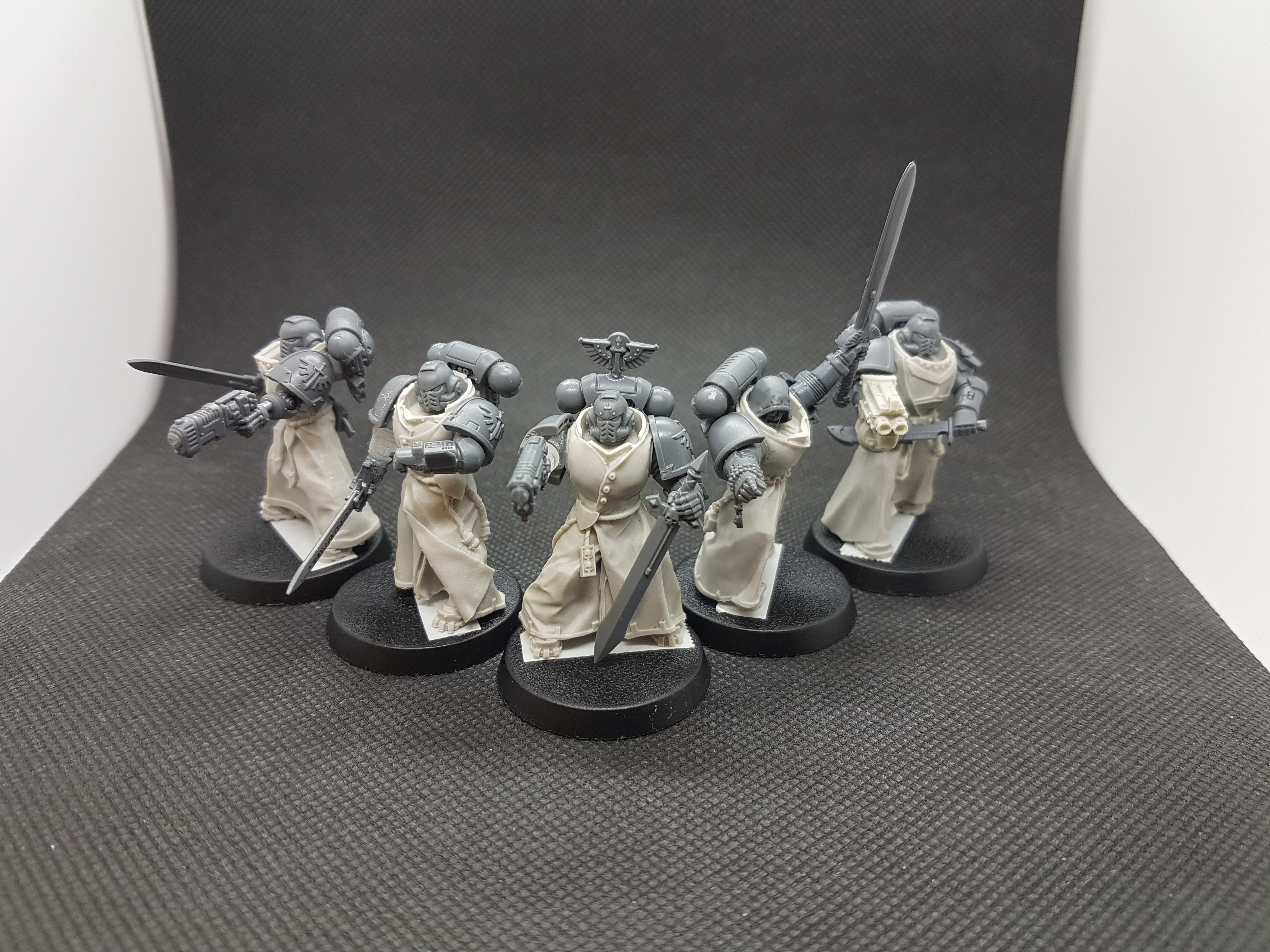 (This is WiP, haven't drilled the barrels yet and there are some minor adjustments still to be made)

Now, to the top 5, choose one of these and give me a name for him!

I will be following with interest.

Great sportsmanship, friend!
Miniatures look really nice. I especially like the one with hood. Name him Sohiel

Yup, those are the Kromlech "Prime Legionnaires Robed" bodies. I used a few on my own ETL vows.

Wonderful models all! I especially like the one with the combi-bolter and combat knife.

His name shall be "Elnakam" (biblical hebrew for "God's retribution"). Fitting name for a Dark Angel.

Power fist Plasma Pistol on Semper? Or are you not telling?

Really nice models, I like the one on the far left. For a name, I have been playing a lot of Binding of Isaac while sick so name him Isaac

Wow a fitting tribute to the Rocks finest warriors!

So, over the weekend, the last parts arrived...

AND CAPTAIN SEMPER HAS RISEN! 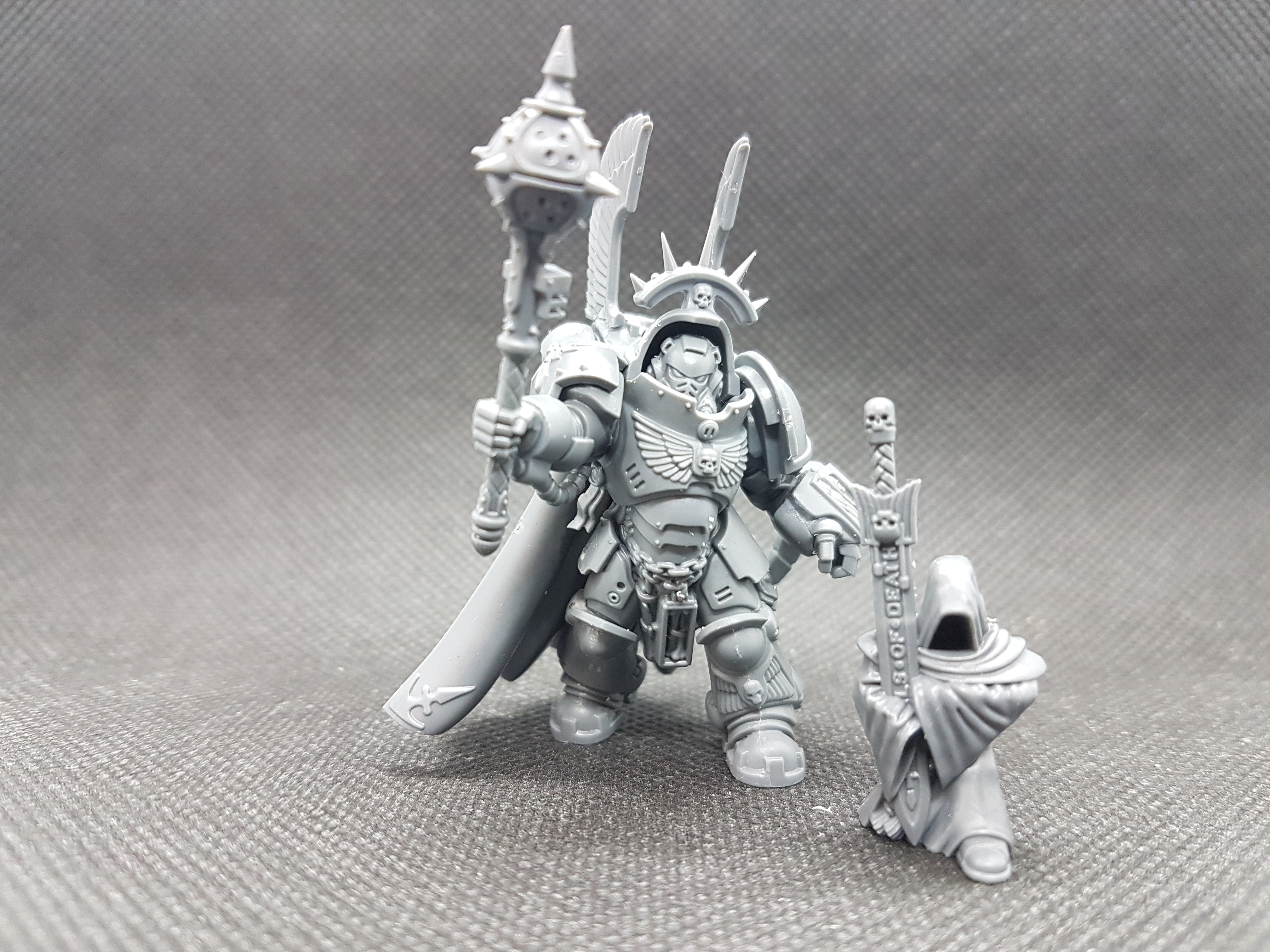 Sadly, even tho all 6 are done, painting them (probably) has to wait some time, due to stress at work and Inktober coming up.

Well, that is some conversion there! Wow! I guess I crossed the Rubicon!

Looks awesome mate, now I look fwd to see some paint on them. I don’t know what “Inktober” is all about but I sure hope you find the time to work on them.

Finally got around to working on them.
They are... 85% done.
They are mostly black, silver metallics, tiny bits of gold and a bit of red trim here and there.
Mostly black. Mostly 30k scheme.

(But I don't want to spoil them YET.)

So, my questing to all brothers in the Rock:

What do I paint the Eye lenses?
Light Red - or would that be to unspecific?

I am really torn. So please help me out!

I like red on black myself as it really stands out as a warm colour on what is (usually, with grey highlights) a cold background. But green could work just as well. I’d give it a test on a spare head and see which you prefer

Good to see this project is still on!

As for the lenses, Blood for the Blood God? Definitely NOT green. Yellow a possibility, but I think red (commonplace as it may be) is the way to go. My 2c anyway.

Brothers and Sisters in the Rock!

Today I come to bring you glorious news...
The Lions of Accon are ready to fight! 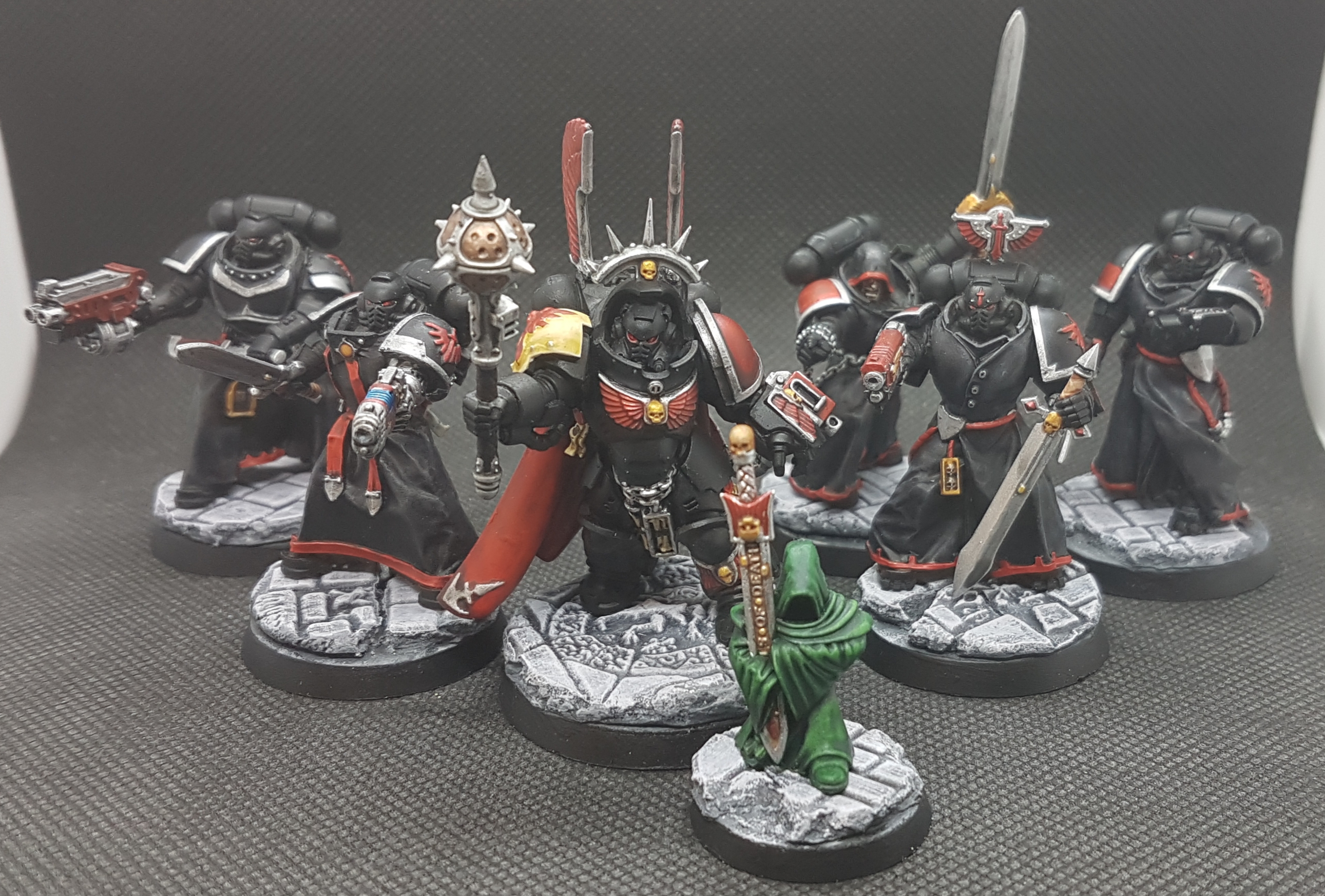 Closer Look at Captain Semper... and the curious little bugger that followed him from the Rock. Does he know of his fate? What purpose has the sword it carries? 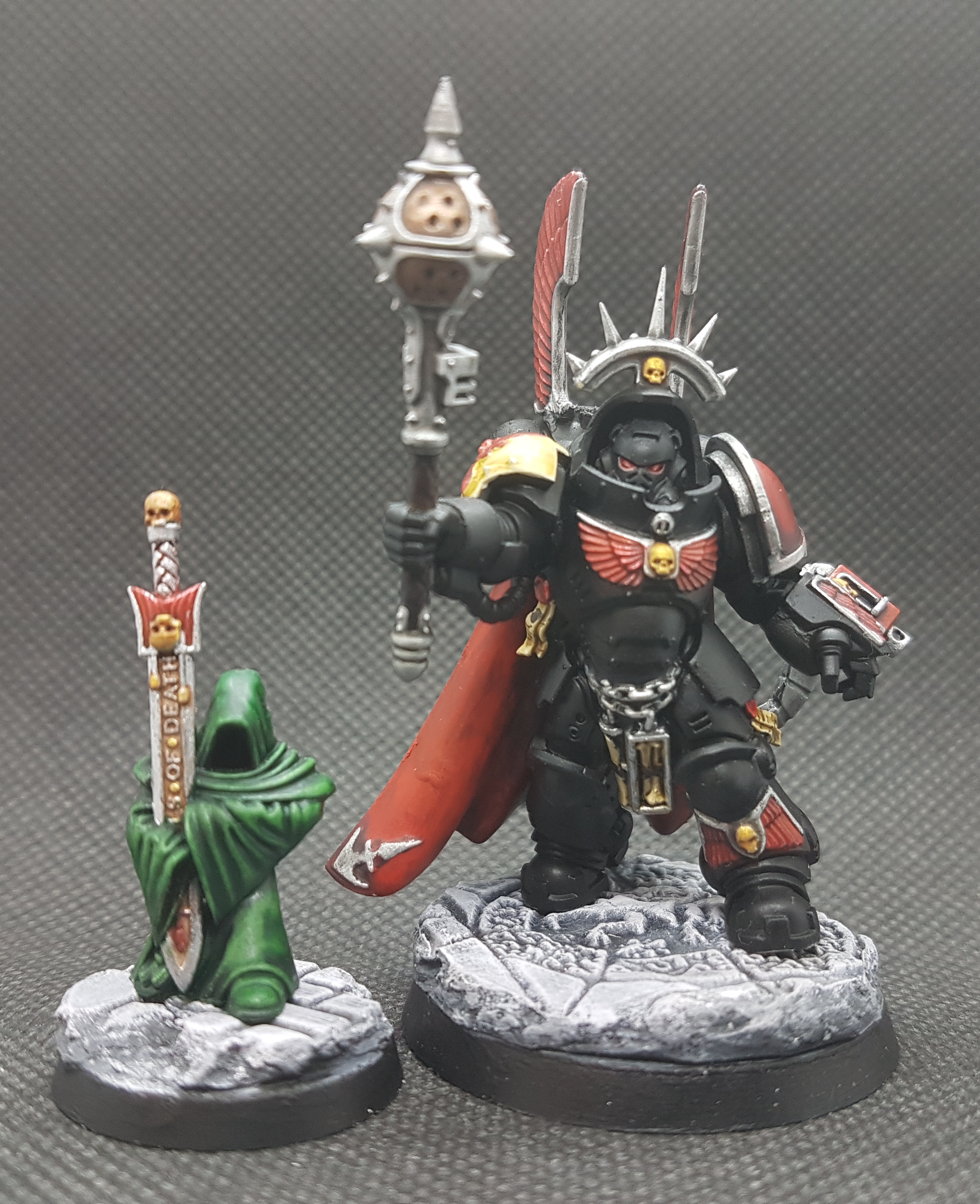 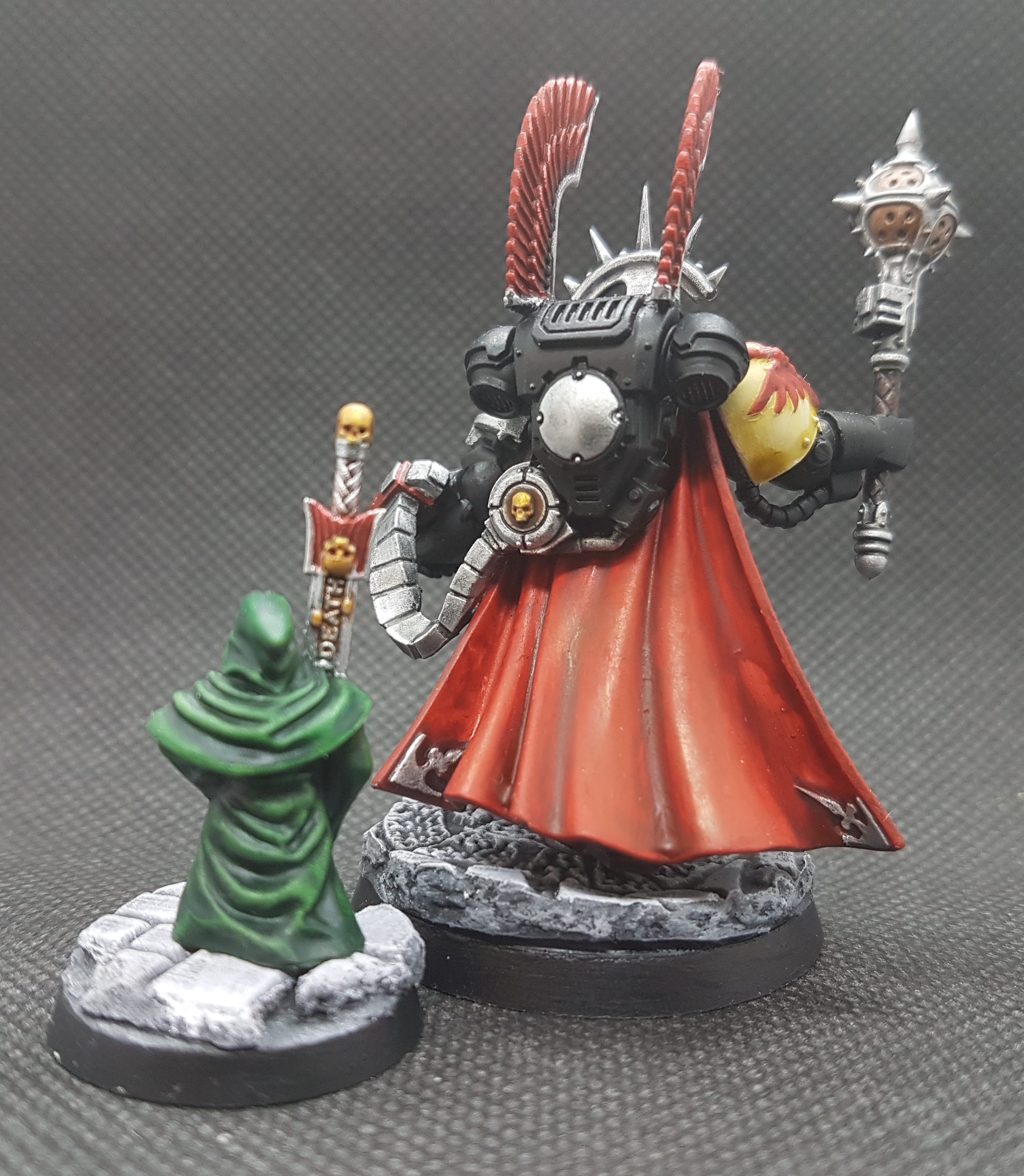 Also a closer look at the Champions, dedicated to the Top 5 Brothers of this very Sub-forum. 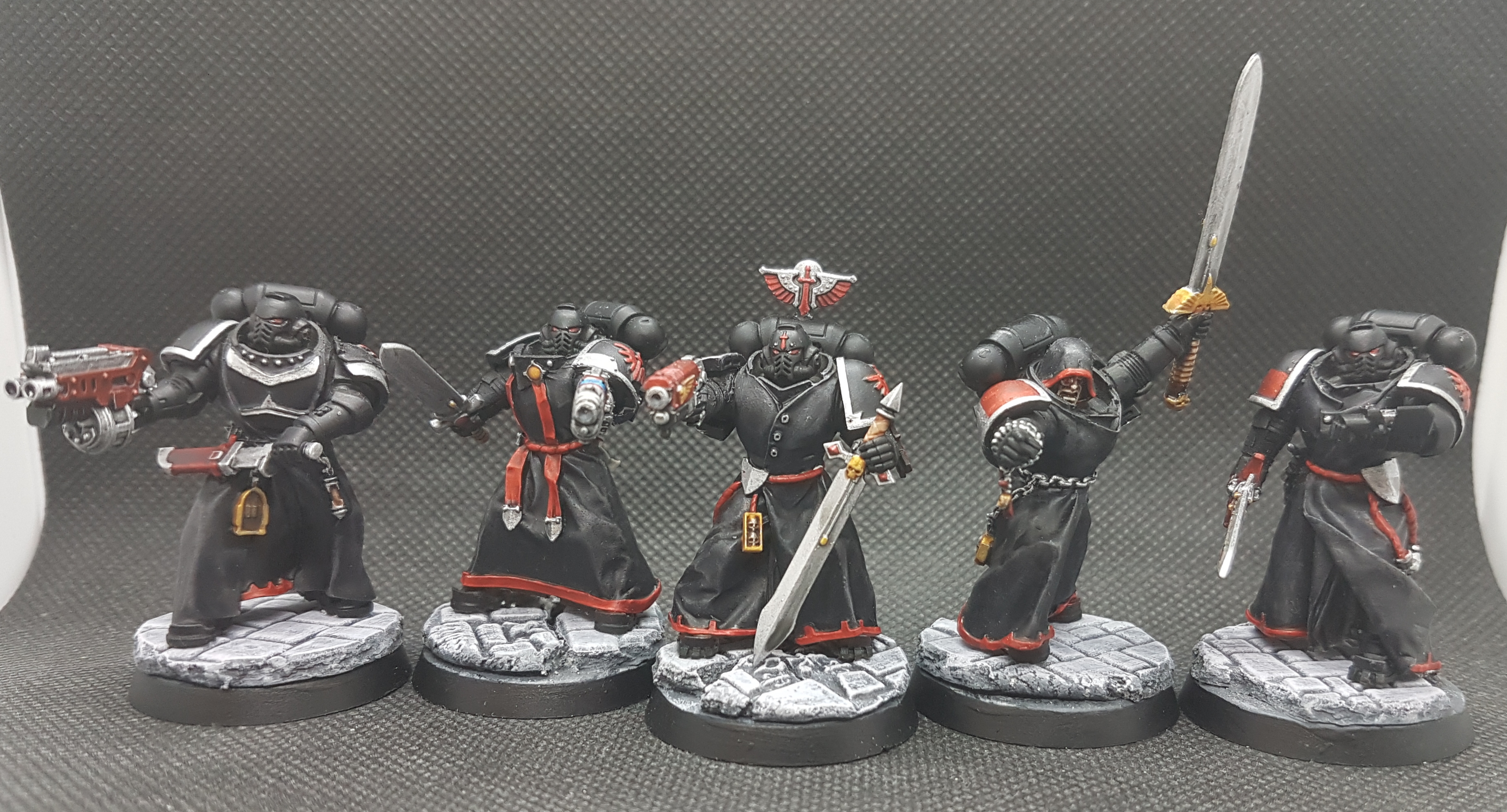 With that, I declare my Oath fulfilled.
I owe nothing to you anymore but my gratitude.

This was a very cool thing to do over the year's end and now the first few weeks of the new year.
It was something ENTIRELY different to what I normally paint - both the aesthetic as a whole, aswell as the more muted "simple" paint scheme.
So it was a departure from my regular turf - together with an Ork Warboss and the Red Gobbo - that was a nice break from my Wolves. (And I can now go back to them with new experience and fresh motivation)
And i learned quite a bunch!

I tried and learned a bunch of stuff you can or can't do with Contrast.
Like drybrushing light grey highlights onto Abaddon Black, before covering it with Grey/Black Contrast Paint, depending on how much you want them to be visible.
The Red on the Mantle was a huge hassle and still isn't perfect, but alas...
Same for the Powerswords. I haven't found a good recipe and technique in a colour I like... the search continues!

The Bases were also done in a way I never tried before.
I bought a bunch of the textured rolls on greenstuffworld and experimented with them.
I found a putty in an art store that is easy to use, dries quite easily, takes all the details really well AND is cheap.
+++Luck is with those who believe in the Emperor!+++
Painting them also took a few tries. Too little and they would look dull. Too much and they would make the whole thing too busy.

...and for those who are curious, these are the bases by themselves. 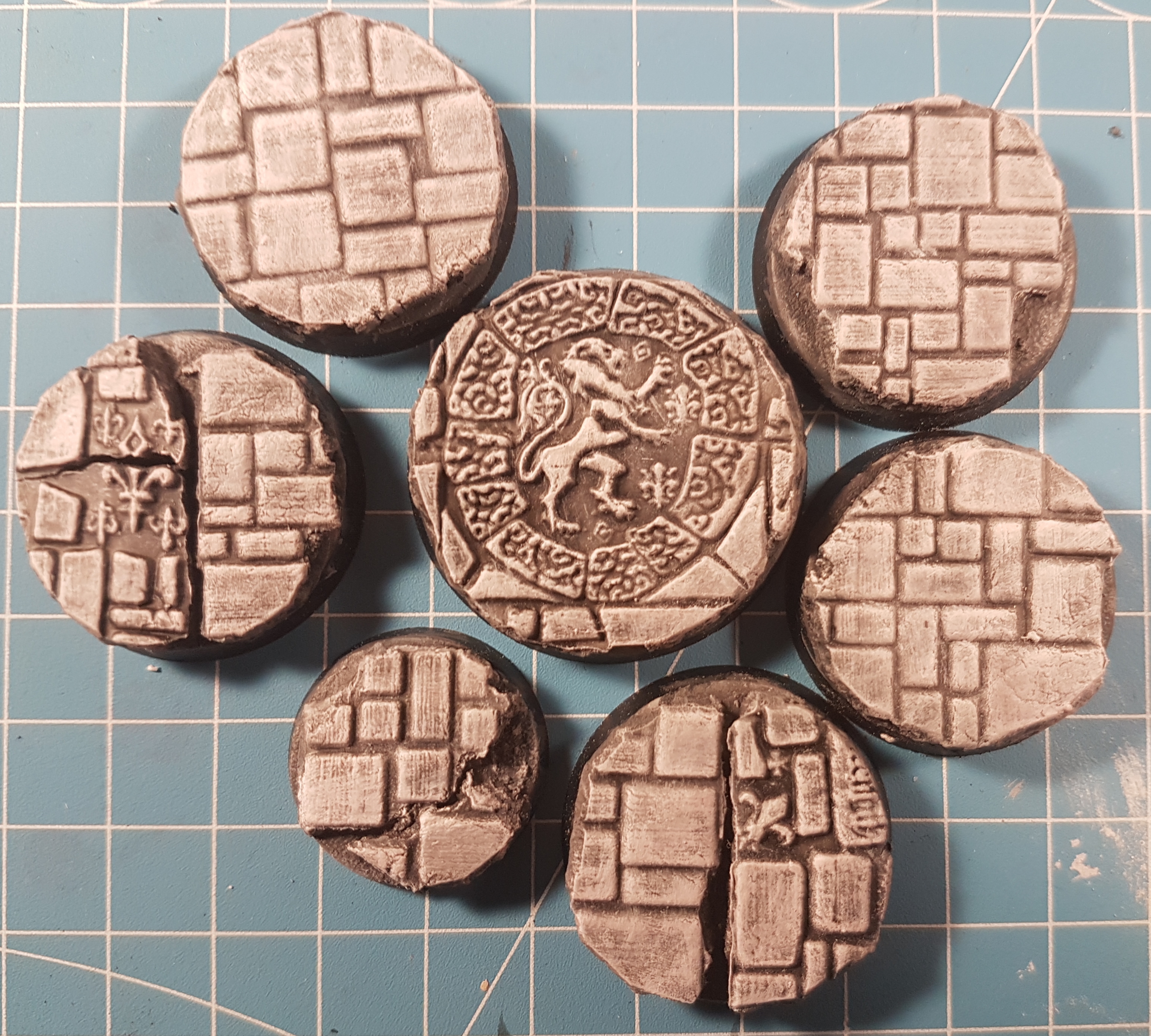 Is this the end of the Lions of Accon?

Surely not. Lazarus already looks really tempting... and he wouldn't come without Lieutenant Zahariel... and probably a regular line unit or two or so...

Congratulations Riku Eru - it does feel good doesn’t it? Completing a self-appointed task that is. Well done sir!

And I look awesome in black Gravis!

Also tagged with one or more of these keywords: E Tenebrae Lux 7, Lions of Accon, Rikuerus Primaris Chapters