34 replies to this topic

Hey Bolter and Chainsword people! I have been playing WH40K off and on now for almost 16 years. I have been apart of this community since 2007, although i don't really post much. But I'm going to change that with my WIP thread Brassclaw's Horde of Khorne.

So let me tell you about my dreams for the future.This thread is ultimately a wish list/goal thread,i might throw in a bit of fluff along the way and of course pics.

You might notice that some of the units are italics, these are the units that are incomplete or i just plain don't have.

So do you think I'm nuts? or brave or both?

Hey guys, So my first round of pics are going to be the completed HQ units I have for the 3 lists. This includes: The Juggernaught Lord, The Command Squad and Khârn.

So, this model is about 3 yrs old in my colleciont. i used to have another juggernaut lord if any remembers the 2nd/3rd edition one. The bits that make him up are as followed: The body and head are from the Chaos Lord on a manticore, the axe is from the Chosen kits, and the backpack is from the 3rd edition lord kit. I believe the jugger himself is from the bloodcrusher kit.

Khârn on the other hand is one of my oldest models, 10+ years for sure. He has been on the receiving end of some scrapes and bruises on and off the battlefield. It’s also not my paint job; it was done by a friend of mine when I first got the model. I have had to paint over some of the parts due to flaking.

A newish unit to the collection, about 1 to 2 years old. Most of the dudes are from renegade militia kit from forge world. The Commander is an inquistor model, his axe is a conversation from the marauder horsemen kit, and i changed his bolt pistol to a laspistol.

That's it for today! See ya next time.

Looking like a good start, I've always fancied doing a Renegades and Heretic's army myself ever since I read the FW Vraks book.

Hello again guys, I have the day off of work so I thought I would take some more pics. Next up is the finished elites section, now the 3 lists don't really call for many elites, actually just 2 units in the whole horde. Contemptor Dreadnought won’t be making appearance anytime soon, but I do have the possessed unit.

Now this unit is gone throught a lot of changes throughtout the ages, both rule wise and model wise. This unit to be a all converted models, because back in the day GW didn't have a possessed models. So this is the rare unit that I have replaced someone of the models for newer models. I usually don't do that but the newer possessed models were too good to pass on.

So now we move on to, you guessed it, Heavy Support. Now on the master list there is quite a few Heavy Support units, 8 in total. Lets start.

I got the forge fiend soon after the chaos codex was release and I'm was a big fan of it when it came out. It's not the best rules wise but it was a fun kit to build and paint.

Now these are my Obliterators. I didn't like the current obliterators that GW has on right now, so i thought i would make my own. I saw a lot of centurion conversions, Biohazard's and Kraut Scientist's especially were good. There are a lot of bits, if you want to know which ones post in the thread and I will do my best to name them.

The first Leman Russ to be finished. Painting finshed not too long ago before I started this thread. Still unsure about the red armour but I think its fine. I just wanted some colour to break up the greyness

Here's the first actual WIP, the 2nd Leman Russ I have. I love the look of this tank, we will see if the red armour bits will pay off.

P.S. If you want to help me name my Khorne Daemonkin check out this thread http://www.bolterand...ame-my-warband/

2nd Leman Russ done. Man do I hate painting free hand, but I think the blood for the blood god looks good. At least good enough.

So these are my two primaris psyker for my traitor guard.

So if this model looks familar, it should. It's Sayl the Faithless. I got him for free when Forge World sent the wrong model to me. So i thought I would use him.

So this was a sorcerer from my failed fanasty project. Using the Dark Emissary model as the base. I was going for a illithid or mind flayer look. 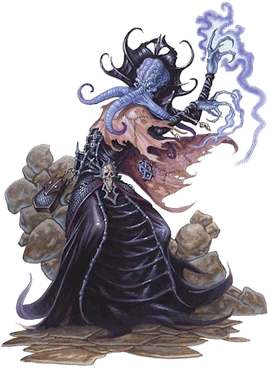 So this is my heldrake, one o the most difficult models to build and paint. Although i think hes worth it. Next time magnetized them wings

Here are my ogryn berzerkers who most play as count as chaos spawn in my Khorne Daemonkin army. Really fun to paint these dudes

So my army has 6 rhinos in it and since i have been collecting for over 16 years now 3 of my rhinos are old type.

Now these were some of my first tanks for this army. I have thought about replacing them with the newer larger rhinos but financial cost seem not worth it.

So here are the last 3 rhinos have I currently have in my collection. They are about 25% bigger than the rhinos from the previous era

So yeah, 40 berzerkers in total are in my collection. This is the first squad of 5. Berzerker are some of my oldest models, so if any of them look rough, chop it up to my youth at the time

WIP of Traitor Guard Veteran Sgt/Officer of the Fleet

Slowly taking pictures of the berzerkers, this is the 2nd squad of blood crazed berzerkers. I believe the champion in this squad is from earlier 3rd or 2nd edition.

Nice start. Look into army painter's Strong tone and dark tone to add a little contrast to your paint jobs. It will make them pop a little more.

Continuing on with the Berzerkers. The Champion in this one is the old Night Lords hero model.

Thanks Eldrick, I will have to check that army painter paints out. I have only ever bought brushes from them. Remember also that some of these models are over a decade old and sadly i didn't really care for painting back then.

We are almost done with my finished Khorne Daemonkin works.

Wooo, the last berzerker squad, and last of the finished works so far in my Khorne Daemonkin Project.

I still have a 2 traitor guard squads that are finished to take pictures of. After that, all projects will be WIPs. So you guys will see both construction and painting. should be fun

Here are some traitors guardmen that I have built and started painting. Mostly made up of spare parts, like cadian guardmen, chaos warrior and marauder bits, and old school chaos raptor special weapons.

So its been a while since I have updated this thread, but I have some finished traitor guard squads to show off, so here is the first.

Hey guys, I have been away from the hobby for a while as i was building a gaming PC, but now that's finished I have come back to the hobby. So if you have been living under a rock lately. You probably missed the fact that the Traitor's Hate supplement was release last month. Now when the book came out I was a little disappointed, as the rumors over sold the final product. With that being said, my buddy pick up the book and I got to get my hands on it over the weekend. So my opinion has changed on the book, so much that I'm planning buy my own copy.

So i'm planning on using 5 formations:

*Maelstrom of Gore formation is neat. I wish it was 3 units minimum, I would use it more if it was 3 units.
*The Lost and the Damned was surprising, A tide of traitors rules basically getting outflanking respawn cultists is really cool.
*Heldrake terror pack is basically 'give me heldrakes' and with the low bar of entry, who wouldn't?
*Cult of Destruction seems fun. Getting an extra shooting phase from oblits seems worth it.
*Raptor Talon seems to be the most interesting out of them all, making Warp Talons more viable its a great disruption formation.

Washes are your friend, so easy to add depth to a paintjob with them.

Do you play at Black Knight Games?

"I have of late - but wherefore I know not - lost all my mirth, forgone all custom of exercises; and indeed it goes so heavily with my disposition that this goodly frame, the earth, seems to me a sterile promontory; this most excellent canopy, the air, look you, this brave o'erhanging firmament, this majestical roof fretted with golden fire, why, it appears no other thing to me than a foul and pestilential congregation of vapours. What a piece of work is a man! how noble in reason! how infinite in faculty! in form and moving how express and admirable! in action how like an angel! in apprehension how like a god! the beauty of the world! the paragon of animals! And yet to me, what is this quintessence of dust? man delights not me: no, nor woman neither. Nor woman neither."

Washes are your friend, so easy to add depth to a paintjob with them.

Do you play at Black Knight Games?

Yes Res, I do play at Black Knight Games. Although not as much as a would like to, due to work. 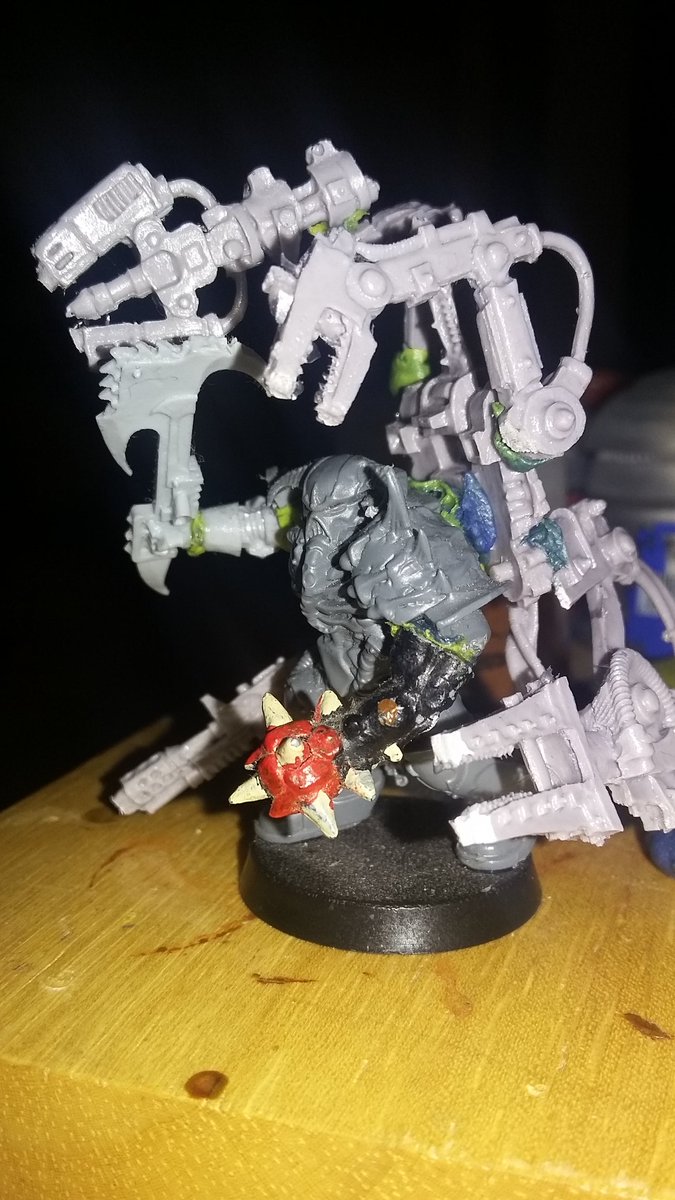 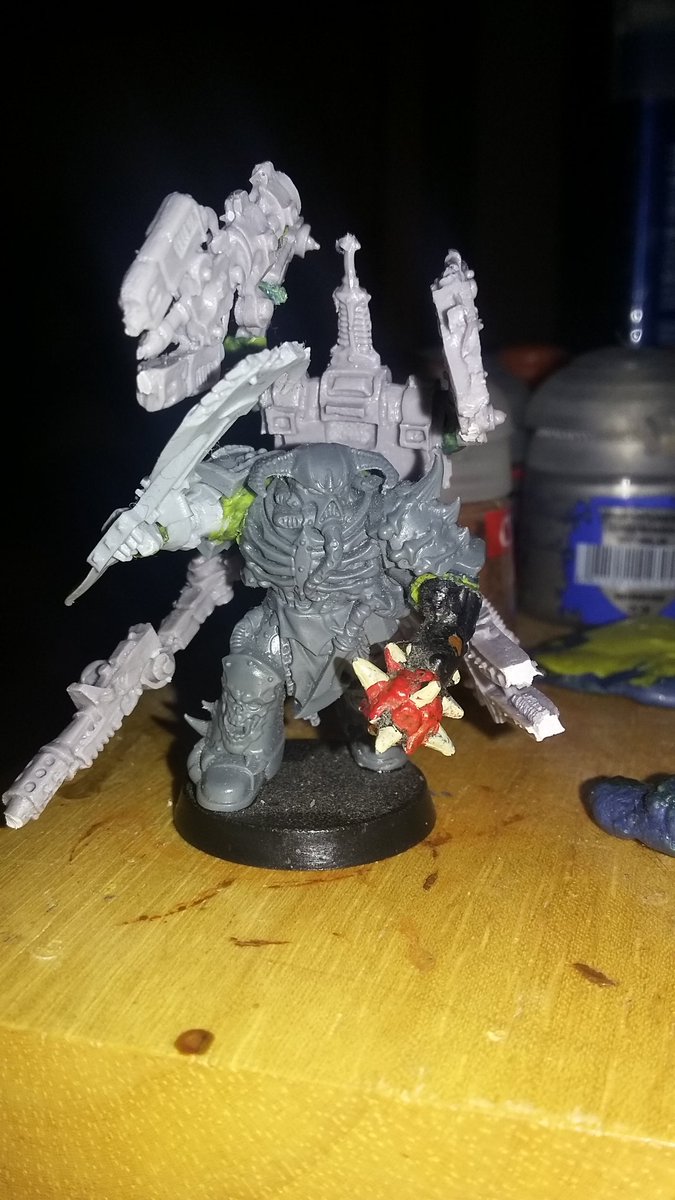 This is the warpsmith that I have been working on. Thinking about painting him in Iron Warriors colours 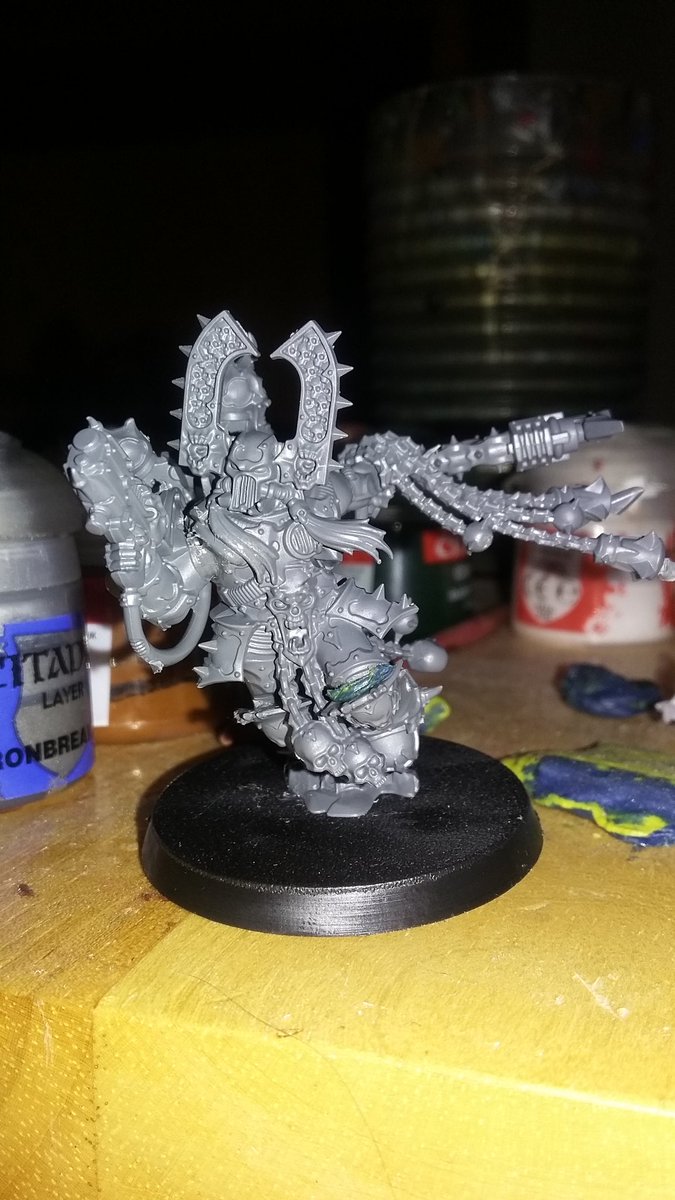 So over the holidays, I got the new Khârn model. I going to do something with the older model. He might become the Dark Apostle or the Jump pack lord. 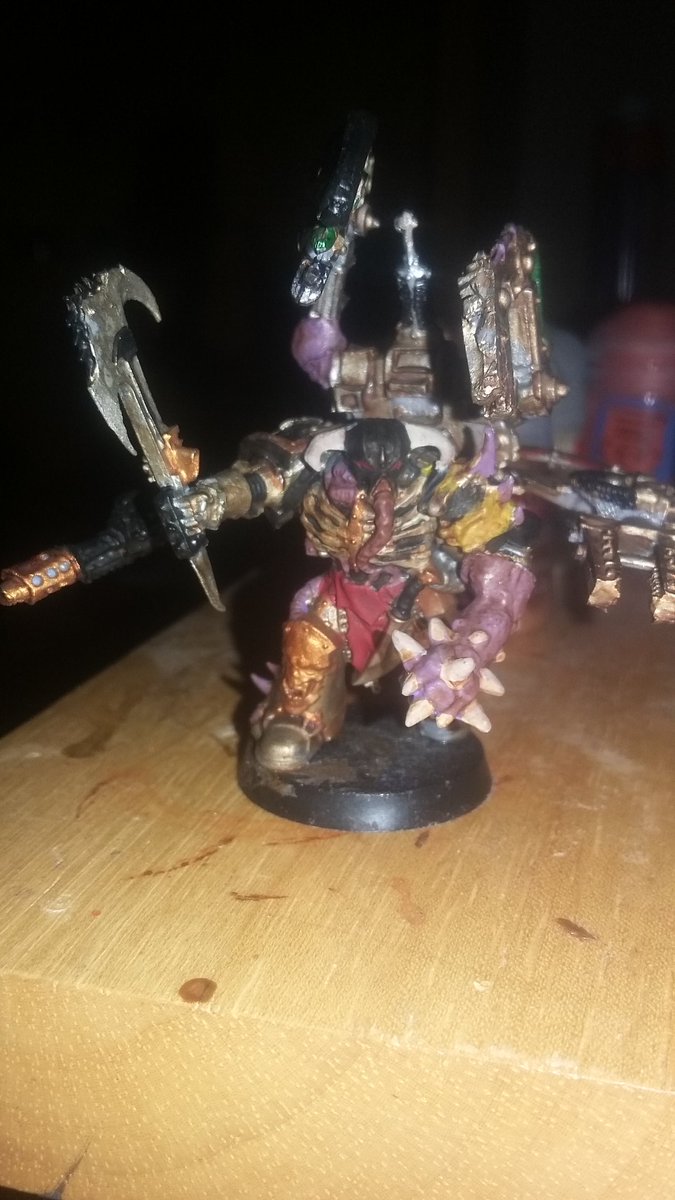 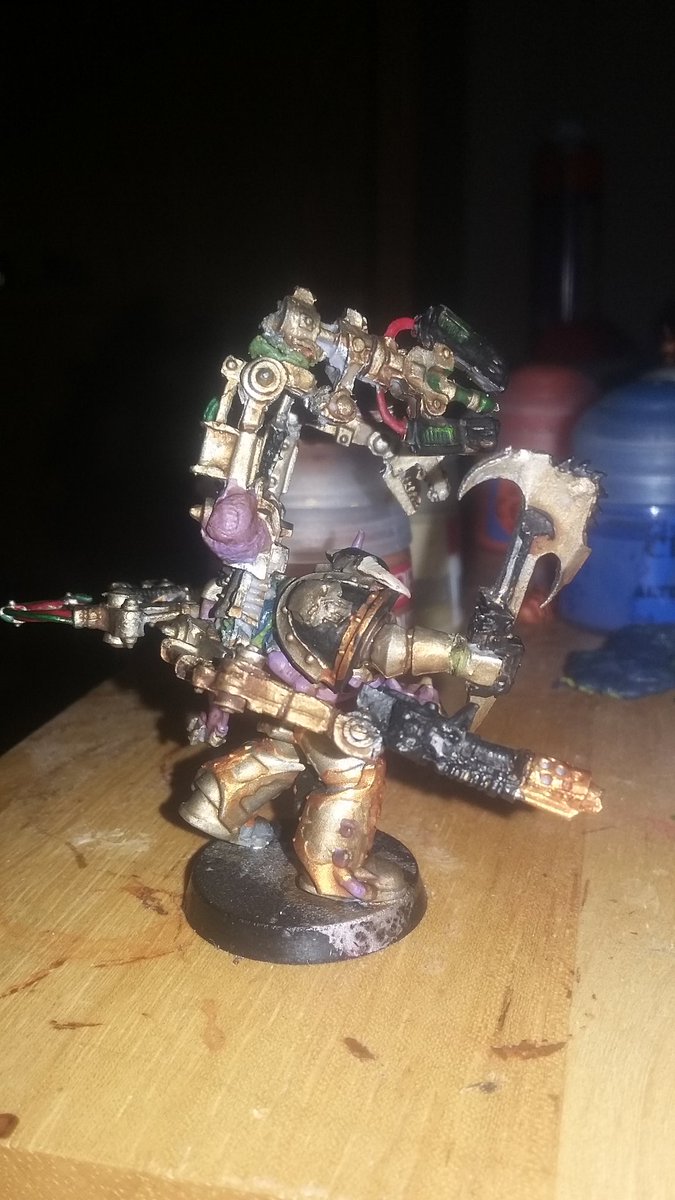 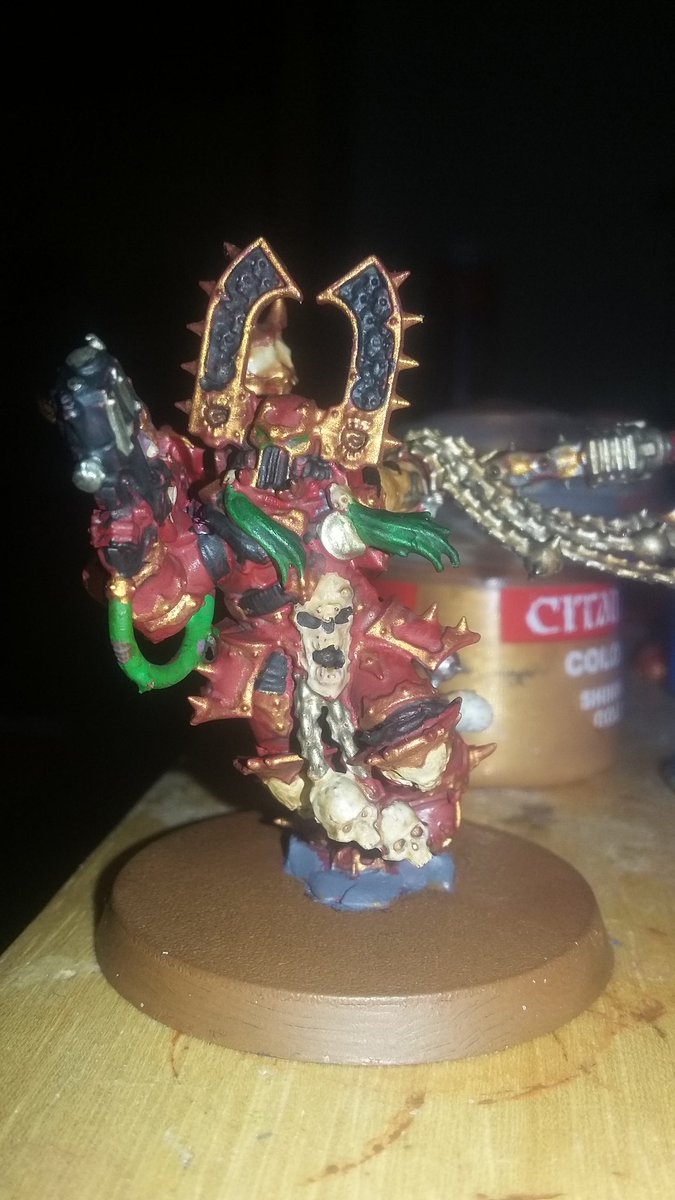 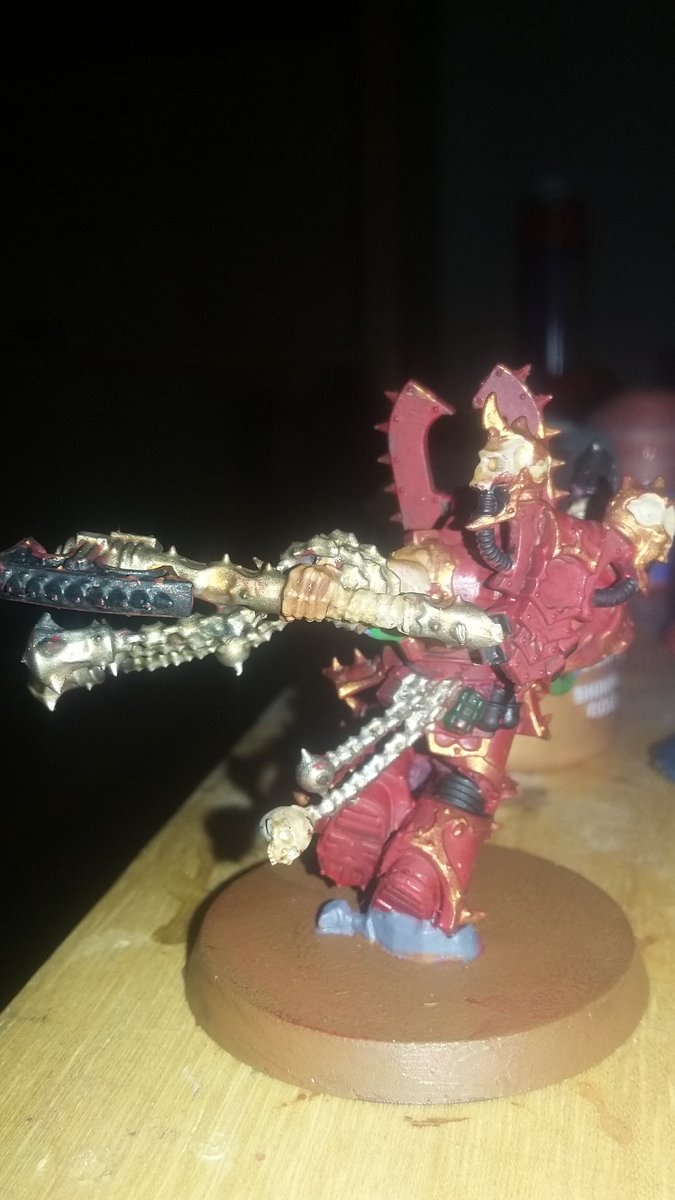 The Warpsmith is pretty much done, a few touch up here and there and of course basing> I like how Khârn turned out, I wasn't sure if it was worth it to buy a new model for me, but now that I have him i really like him. I'm not sure what to do with the old metal Khârn. Maybe turn him into another character? I do need a Dark Apostle and a jump pack lord.