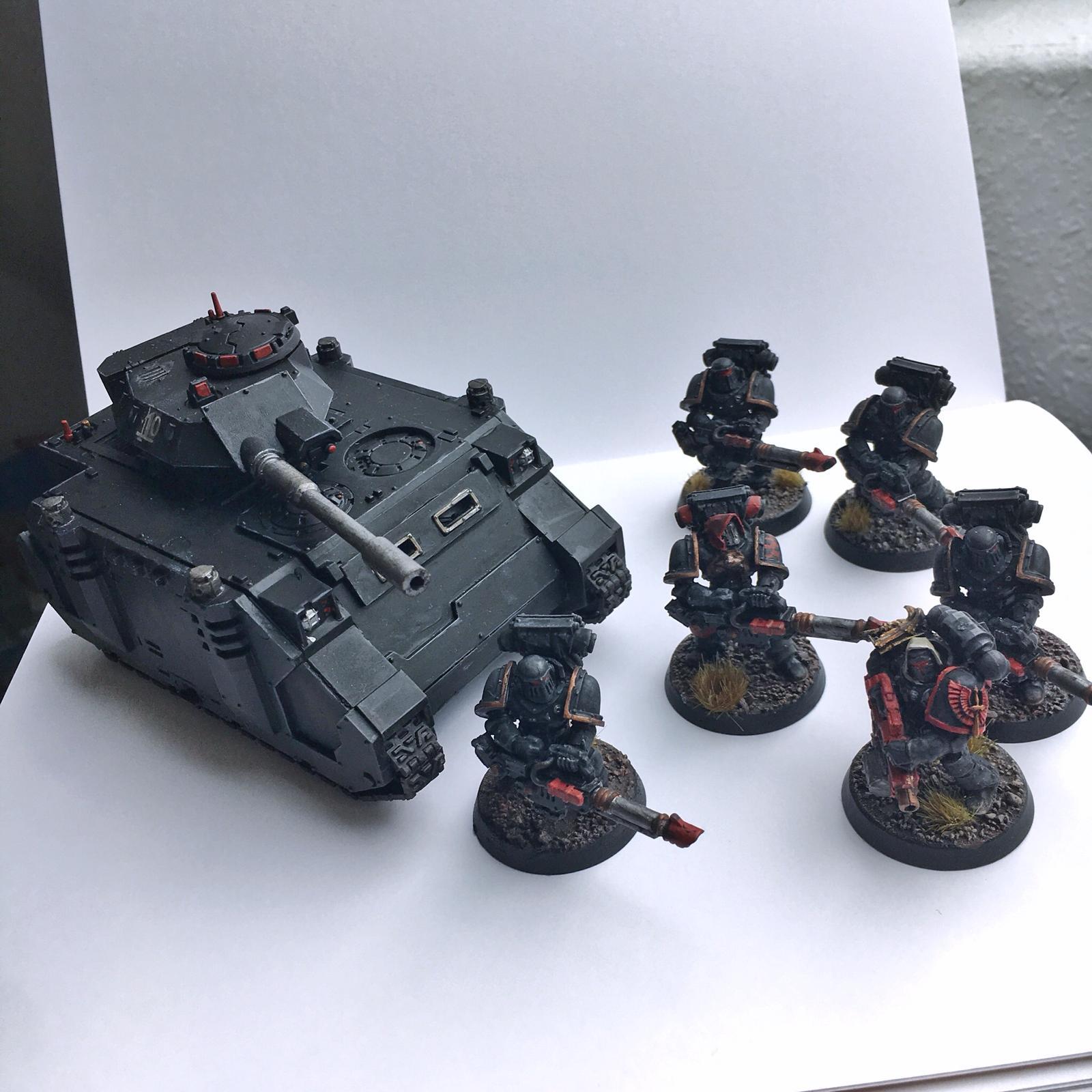 For  Lord Luthor,  for Caliban and for the Warmaster.

Wait a minute... are these... Fallen? *grabs heavenfall blade*

Congratulations man! Any plans for a follow-up?

Congratulations man! Any plans for a follow-up?

I´m planing right now. But my reserves are sparse. I will figure something out.

Well done for the fast completion! And Fallen, I like it!

Chaoself, if you want to you can retro-actively sign up your first vow as an OOC entry for the "March of the Fallen" over in the CSM forum. You are welcome with any Fallen you do in later vows as well!

Hah, you got it in one, Lamebeard, my dude. That is absolutely Azrael's sweet sweet bullpup combi bolter. A friend gave me the old metal a while back and I stashed him away in my bits box, so when I needed some fun standout vet/vet sergeant, I just had to steal that


It looks beautiful. And now you have the rest of the model ripe for another conversion. Maybe even this side competition of Deathwing vs. Fallen?

I have a pile of bits waiting to be assembled into a cowl-wearing, sheathed-sword sporting, plasma-pistol and bolt-pistol wielding dude. This side competition might be the motivation I need (or a dangerous distraction from the actual proper vow!)

Ps looking forward to your weathering tutorial. I got some weathering power long ago, never used out of fear and trepidation.

The 6-7 thin layers of clear red are all done on the Sons, so it's the arduous task of painting the gold trim next! This is why I've only a small unit of Rubrics/Vets!! I'll probably batch paint a few trims then focus on one or two at a time.

Painting time is limited; lucky I've airbrushed all that needs doing, which is usually the limiting factor. I'm still playing around with conversions so more sorcerers are coming....

Then there are Night Lords led by an equally special character..... I'm pretty pleased with the conversion....

I, Shard of Magnus, rise to the challenge of E TENEBRAE LUX on the side of the Age of Darkness - Traitors and vow to complete a force of 1057 points total value on or before September 1st, 2019. Success will bring me eternal glory and redemption in the eyes of the Warmaster; failure will doom me to wear the Badge of the Oathbreaker once more.

Well, with Shard's vow, you guys are now with 10 participants (vs. 9 for the Loyalists) and some 700pts ahead!

+++THIS IS THE CUT-OFF POINT FOR THE FIRST WEEKLY UPDATE+++

Weeeeell, I did miss the first cut off, decided instead of just pushing through it I'll finish the rest tomorrow and took a Kill Team break with the new vets as my centerpiece unit

Lamebeard, killer idea.  Yeaaah I've been wanting to put together something so a small Fallen force may well be in the cards as a sort of thumbed insult to my friend's Dark Angel loyalist group.  Doooo it, do it and I'll see what I can come up with to make an interesting character.  Even if it ends up as one of my later vows to make sure we can keep up some momentum (maybe with some cult 'leaders' that I've been needing to work up)

But I did get 'a bit' of work done and I guess working together a bit of a weathering guide (which you can get here.  If it interests ya... not that it matters or anything... b-baka). Still some more work to finish up before I'm happy buuuut meh, pushed it a bit.

Post Scriptum: And now the Guide has its own little tutorial page so no one has to look at my dreadful dreadful army page but gets all the camp and candor of how I normally conduct myself: A Quick and Messy Method for Weathering Tanks and Armour.  Clever, subtle, nuanced in referential genius, and it just so rolls off the tongue.  Ugh, how do you lot put up with me?

I have started the work on my second vow with a Legion herald Consul. I have also ordered another predator.

Ermm, you need to make a vow before you do any work on it...

Unless you're talking preparatory work?

I meant glueing it together.

I meant glueing it together.

Updated my original vow post with the before picture so everything will be together.

Now, if the power will just stay on I may actually be able to make some progress today.  Next steps are to build up monochrome shading and highlights on everything, decide if I want to use the cork decorated bases for the Gal Vorbak or not, and trial the new contrast paints as an option to the glazing/washes I normally use.  The cork bases were done to match my 40k daemons.  Iron Warriors will be on sector mechanicus bases however and I'm now considering switching to that for consistency with all the my heresy stuff.

The power issues have given me some time to look at my pile of unpainted stuff for future vows.  This first vow has several units that I've wanted to put a lot of attention to, and have been holding off painting for concern of messing them up, so there's a real possibility I won't get to another vow.  But if I do, choices abound between 100s of infantry, dreadnoughts, knights, ruinstorm daemons, and more fortifications.  (Yes, I might have a problem with impulse buying.)

Hah, that's quite the backlock Shard of Magnus, dude.  I'm curious to see what those infantry options are for a potential follow up vow.  But as for the Vorbek... I mean, depends what you use 'em for, you can always just meld them a little by adding a bit of both: shattered mechanicum bits, some cork, maybe daemony warpy bits for twisted ground.  'Tis a thing for the possessed. How are the bases rimmed?

AS for me: bit of a WIP, but man mk. V vets are a blast.  Just waiting for the rain to let up, the oil on the bases isn't dry, but otherwise I'm basically done.  aaall just waiting around.

Like the base!  It's a good match with the minty green armor.  And the weathering on your tank...wow.  Weathering is one thing I've never tried but your guide makes it look easy to great results.  Tempting...

Since there are only 5 of them, I'll probably do both styles of bases and see which one complements the Gal Vorbak once they are painted.  Last time I did cork style bases the rims were painted a dark reddish brown.  But I've been very inconsistent with basing in recent years while trying different things.  Should make an attempt to redo all of them one of these days.

The infantry backlog is mostly MK III and IV tactical and heavy support squads.  The more interesting stuff to paint would be an ashen circle squad, word bearer vets (full fw upgrades), tyrant siege terminators (modified BaC cataphractii), or some of the way too many indomitus terminator squads (with all post heresy components removed).  Anything else is stuff I was using to experiment on militia conversions.  I bought most of these, or hacked up my 40K units, because I like the look of mass infantry.  But I lose focus and interest quickly when painting infantry units so they became another unpainted brick in the backlog wall.

And it's cork so I miiiight be a bit biased on how good it is, even with mech themed stuff!  Hey dude, if you wanna give weathering a shot, it's not a bad way to go.  It's pretty quick and not that fiddly, it's specially developed to be as user friendly as possible (non-sales speak: I'm an impatient slapdash painter who wants to get a consistent and easy result.  It's also how I do all my bases after a quick ten second airbrush trip)

Aye dude, do both and match up what you like.  I know it's what I usually do, and I usually have a dozen or two different kinds of bases hanging around my paint-works just to get an idea of what might look good.  Then I go from there.  As long as the base rims are the same it should be fine, but then again, using that line as the 40K/30K divide might work too.  rebasing is always better than full repainting so at least it's within the realm of 'not completey insane' dude.  So, doooo it, and toss up the results for us to see  the funsies, eh?

Bit of a fan of tacs myself, but ashen circle and word bearer vets is pretty rockin.  So you're in good company, massed infantry is awesome.  Cleaned up Indomitus is something I don't see that much, kinda always like seeing them even if they're not my 'style'.  Catii, weeeell that's another matter.  That's a great 'problem' to have.  I mean, depends on how you wanna differentiate infantry units too, right?

Oh, my WIP for the rest of the day till I get the last of the vow finished up: the Veteran squad, heavy one vox operator!

A lot of progress here guys! You definitely need more participants though.

And Vykes? Those are terrific man - just love your style!

Thanks Semper, mate! I guess I have developed something of a style?  Lazy grunge!  I shall call it lazy grunge

But lo and behold, it produces results! I'd write a blurb but the last one ended up like 2 pages long.

For now, suffice to say, Vow 1 is complete:

@Shard of Magnus, I am jelly of those fortifications. If I had known they would have gone out of production, I would have stocked up...

Well done indeed! I have updated the first post with your completion and look forward for a follow-up!

But I hate to be a bringer of alarming news: The Loyalists added three more participants and with hefty vows too! They are now firmly ahead of you guys - so now you need to respond!

A Dark Angels Herald Consul and a Predator Tank of total value 200pts on or before September 1st, 2019.

Success will bring salvation to the true children of Caliban  and failure will doom me to wear the Badge of the Oathbreaker  until the year-end.

Another small vow especially compared to the other vows here, but I´m eager to do something more. Maybe I can bring a larger Vow next time.

4 user(s) are reading this topic